Bobby Sessions Has No Patience For Your Drunk Antics. 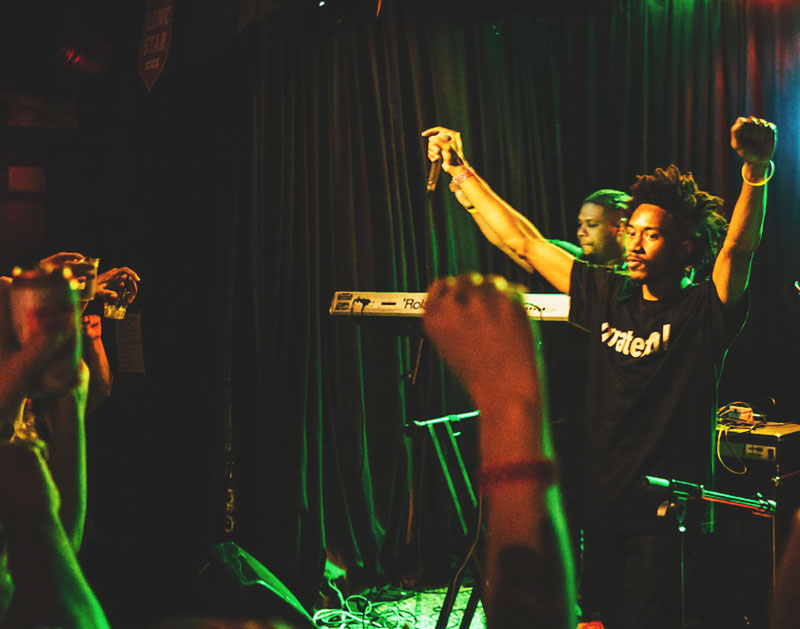 Watch Dallas Rapper Bobby Sessions Masterfully Usher A Drunk Audience Member Off His Stage By Using Only His Wit And His Rhymes.

Since the release of Sessions’ great LOA (Law Of Attraction) LP in late 2015, Sessions has taken to repeatedly referring to himself as “The Legend Bobby Sessions,” which would be a little much, except, well, dude’s at least kinda on his way to becoming that. And, also, LOA‘s entire theme centered around the power of positive thinking and manifesting one’s own destiny, so at least he’s staying on message when he says things like that.

And, y’know, so long as he continues pulling off feats like he did in Austin last week, Sessions’ boasting could very well come true.

Here’s the backstory: While down in the state capital performing alongside the always-stellar RC & The Gritz, Sessions was performing his song “First World Problems” from his superb, this-year-released grateful. LP when a fan got on stage and decided to try to flash his own skills while Sessions was still going. It was the move of a man who had clearly had too much to drink.

We’ll let how Sessions handled himself in that situation take things from here. Check out the video Sessions shared of that moment on his social media this afternoon:

That’s like a masterclass on how to handle a problematic stage-crasher right there!

As Sessions also notes in his post, he did it without throwing any punches, without interrupting his flow, while interjecting some clever new rhymes into his performance that were directed at the inebriated fan and while never losing his audience’s attention.

But it gets better. Writes Sessions: “The coolest part is after the guy finally left the stage…he CONTINUED to dance to the music!”

That’s impressive stuff right there, folks.  Maybe the dude’s a legend after all…