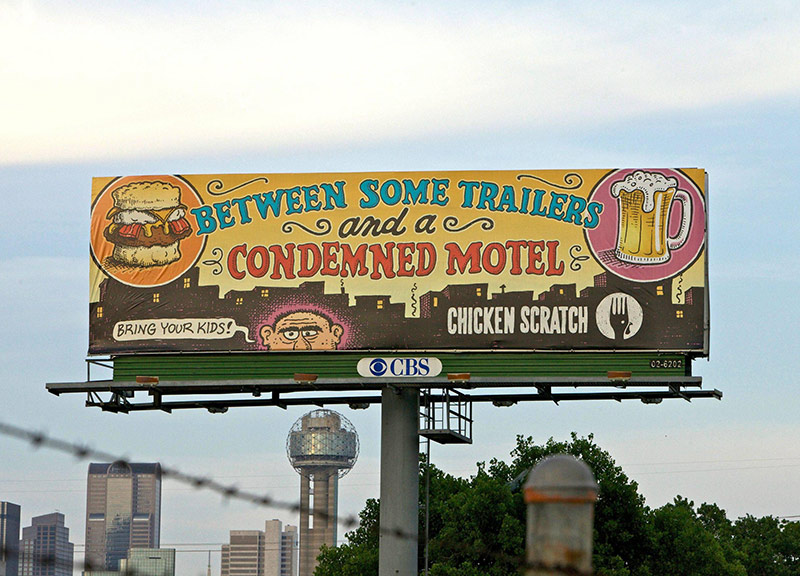 Chicken Scratch Has The Best New Billboard In Town.

It's a rare thing when a company proves itself willing to advertise even the seediest truths about its business, rather than simply selecting the route of solely emphasizing its excessive positives.

Turns out, the restaurant wasn't put off in the slightest when Bull joked that the ad they'd asked him to create promote the fact that the family-friendly establishment exists as something of an oasis between its Oak Cliff neighbors — a trailer park and a condemned motel. Much to Bull's surprise, actually, Chicken Scratch's brass wholly embraced the idea. Furthermore, upon seeing a first draft of the design for the billboard, restaurant management even asked Bull if Elliott Park, who'd been tasked with creating a Church of the Subgenius-inspired illustration for the planned billboard, could make his art “even creepier” than had been seen in his initial illustrated submission.

Or so goes the story that the currently and proudly self-employed Bull told AdWeek in an interview posted to the trade publication's “Ad Freak” blog this morning.

And, really, that glowing post is just the beginning of the attention that Chicken Scratch and Bull have received this week. Prior to the AdWeek feature, the billboard, which was only erected at the intersection of I-30 and Beckley Avenue this past Tuesday, had already become something of an Internet darling by Wednesday afternoon, when a post Bull had submitted about the ad to Reddit had been up-voted all the way to the frontpage of the content-sharing social site. (At the time of this posting, Bull's submission currently boasts an impressive 2,369 points and a whopping 15,321 up-votes.)

It's a funny ad — there's no doubting that. Check out the billboard, as photographed by Bull himself and posted to his aforementioned, well-received Reddit submission, below: