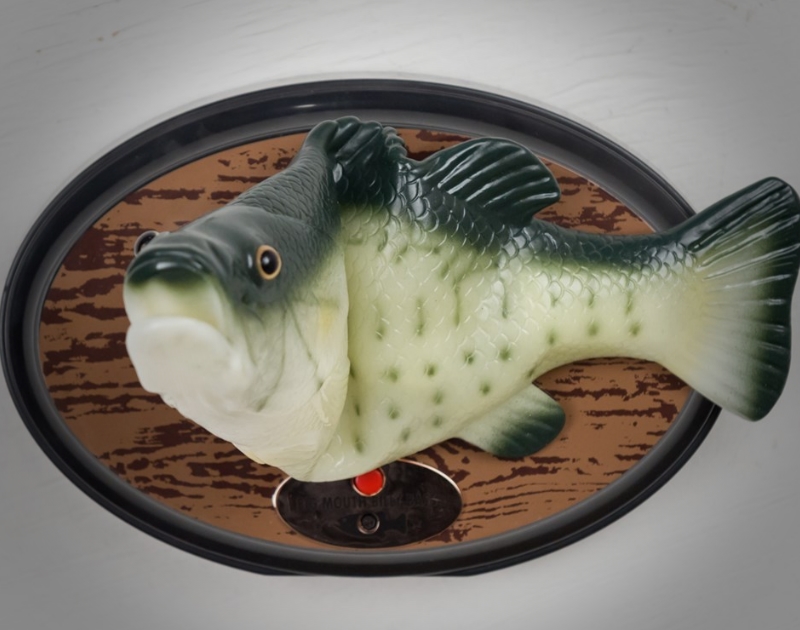 As North Texas’ Most Successful Novelty Toy Gears Up To Turn 20 Years Old, Let’s Take A Look Back At How Society Got Hooked On A Singing Rubber Fish.

Update on November 29, 2018: Earlier today, the news broke that Big Mouth Billy Bass would indeed be getting an upgrade for its 20th birthday with the help of Amazon’s Alexa technology — just as speculated in the below piece. We have added an update within the below copy to detail Billy’s new abilities. But, mostly, we just wanted to say the following when it comes to this fish’s staying power: We told you so.

George Bush had one in the Oval Office. Queen Elizabeth II kept one in the Balmoral castle. Tony Soprano once got one for Christmas.

And your dad wouldn’t shut up about his, either.

From the highest classes to the lowest of brows, the simple comedy of Big Mouth Billy Bass has resounded throughout the years with audiences across the board, with hundreds of thousands of units being sold since its rise to prominence just before the turn of the millennium.

According to lore, Big Mouth Billy Bass’ conception began with a trip to the Grapevine location of Bass Pro Shop, where inspiration struck Barbara Pellettieri, who noticed the logo of the store she was about to enter with her husband Joe and suggested that his company design a novelty singing fish.

It wasn’t that crazy a notion: Since its founding in 1984, the Coppell-based Gemmy Industries has had many a hit on its hands with its high-selling singing (or otherwise animatronic) lines of toys — among them Douglas Fir The Talking Christmas Tree, Pete The Repeat Parrot, Buck The Animated Trophy, Sunny The Sunflower, Mr. C. Mor Bunz (who’d moon you when you squeezed a pump) and a Caddyshack-branded Dancing Gopher that wiggled his rump as he sang the Kenny Loggins song “I’m Alright.” Pellettieri had also previously struck gold with his Kung Fu Hamster, which vibrated along to Carl Douglas’ “Kung Fu Fighting.”

Although the company also produces such fare as those inflatable Christmas decorations that you see in just about everybody’s yards these days and, rather randomly, standing desks, gag gifts have long been Gemmy Industries’ forte. (“We came out with the first fake cell phone in 1987-88,” CEO Dan Flaherty once claimed.)

Of course, none of those other offerings has ever come close to touching Billy Bass in terms of pop culture contributions or sales.

Billy was an immediate hit, too: Two years after Pellettierri conceded to his wife that his company indeed didn’t have anything in its portfolio at the time that appealed to sportsmen like a singing fish might, the same Bass Pro Shop that inspired Big Mouth Billy Bass would reportedly sell more than 500 units within an hour of initially stocking it.

Within a year, it has been speculated that over $100 million worth of Billies were sold– a figure that’s never been confirmed by Gemmy or Pellettieri. One astounding figure that has been confirmed, though, is that the version of “Take Me to the River” that the rubber fish sings netted its songwriters more royalties than any of its many successful cover versions — yup, even more than that one by Talking Heads.

But, almost just as quickly as he arrived on the scene, Billy also wore out his welcome.

Before long, retailers had dropped his early-run $29.95 price tag to a mere $5. And, soon enough, eBay was flooded with several versions of the gag gift, ruining for entire generations “Take Me To The River,” “Don’t Worry Be Happy” and the other songs Billy was programmed to sing.

Still, other Texans have found ways to profit from Billy’s appeal over the years.

In 2005, famed North Texas restaurateur Shannon Wynne made headlines for dedicating one wall in his Flying Fish restaurant as a Billy Bass graveyard, going so far as to hand out free catfish to folks that donated their discarded animatronics to the cause. Now, his chain of restaurants is well-known for decorating its locations with floor-to-ceiling Billy Bass altars.

“I was also able to get Billy Bass to trigger my robot vacuum to start a cleaning cycle, which I find cool,” the network engineer told an NBC affiliate in New York back in March.

Just last year, Business Insider reported that Amazon was looking into selling a Bluetooth-enabled version of the 20-year-old fish. So, no, it’s not altogether out of the question for future generations to be asking Alexa to take them to the river. (Update on November 29, 2018: Released just in time for the fish’s 20th birthday, the long-rumored Alexa-upgraded Billy Bass is now officially out and available for purchase. He can tell you the traffic, the weather and the news, search the web to answer various other question you might have and even sing you a new original song called “Fishin’ Time.”)

In fact, such a return to the zeitgeist now seems fairly likely. As football season has returned to network television this fall, so too has a new spate of national ad campaigns — including one from Navy Federal Credit Union that features a starring turn from a familiar friend.

Seems Big Mouth Billy Bass’ fish-out-of-water tale is destined to be more like a never-ending story. Because in this fishing tale, it’s society that remains shockingly hooked.