And You Thought Westdale’s Plans At The Epic Were Nuts!

Wait Till You See What Deep Ellum’s Biggest Land Owner Has Planned For The Facade Of Its 17-Story Residential Tower, The Case Building.

A few months prior to the October 2015 unveiling of its intent to construct the future Uber hub and massive real estate development The Epic, Westdale Asset Management first turned heads (and sent shivers up the spines of the Deep Ellum’s loudest, nothing-should-ever-change advocates) by revealing plans to build the 17-story residential tower known as the Case Building on the eastern end of the neighborhood.

At the time — just two months before being overshadowed by The Epic’s announcement — the Case Building was set to become the Downtown Dallas-adjacent cultural district’s tallest building. But, while we now know that two separate towers within The Epic’s four-building complex will rise above the Case’s considerable height, we can all rest assured that Westdale — far and away the largest land and property owner in the neighborhood — still has audacious plans still coming down the pike for its first, if long-overshadowed, major recent Deep Ellum construction.

On August 15, the Case Building’s managers emailed the building’s residents to share with them “exciting news” about a major, Deep Ellum Enrichment Project-backed change immediately coming to their building’s look — a transformation that will arrive over the course of the next few weeks in the form of a large-scale mural set that will cover the west-facing exterior of the building’s top 15 floors.

Seemingly not content to accept victory in the form of the Case Building’s red brick exterior blending surprisingly well — to date, at least — among the aesthetics of its many similarly designed, also Westdale-owned nearby residential properties, the building will soon boast a colorful mural from the Italian-born muralist Pixel Pancho of… well, we’re not exactly sure what! 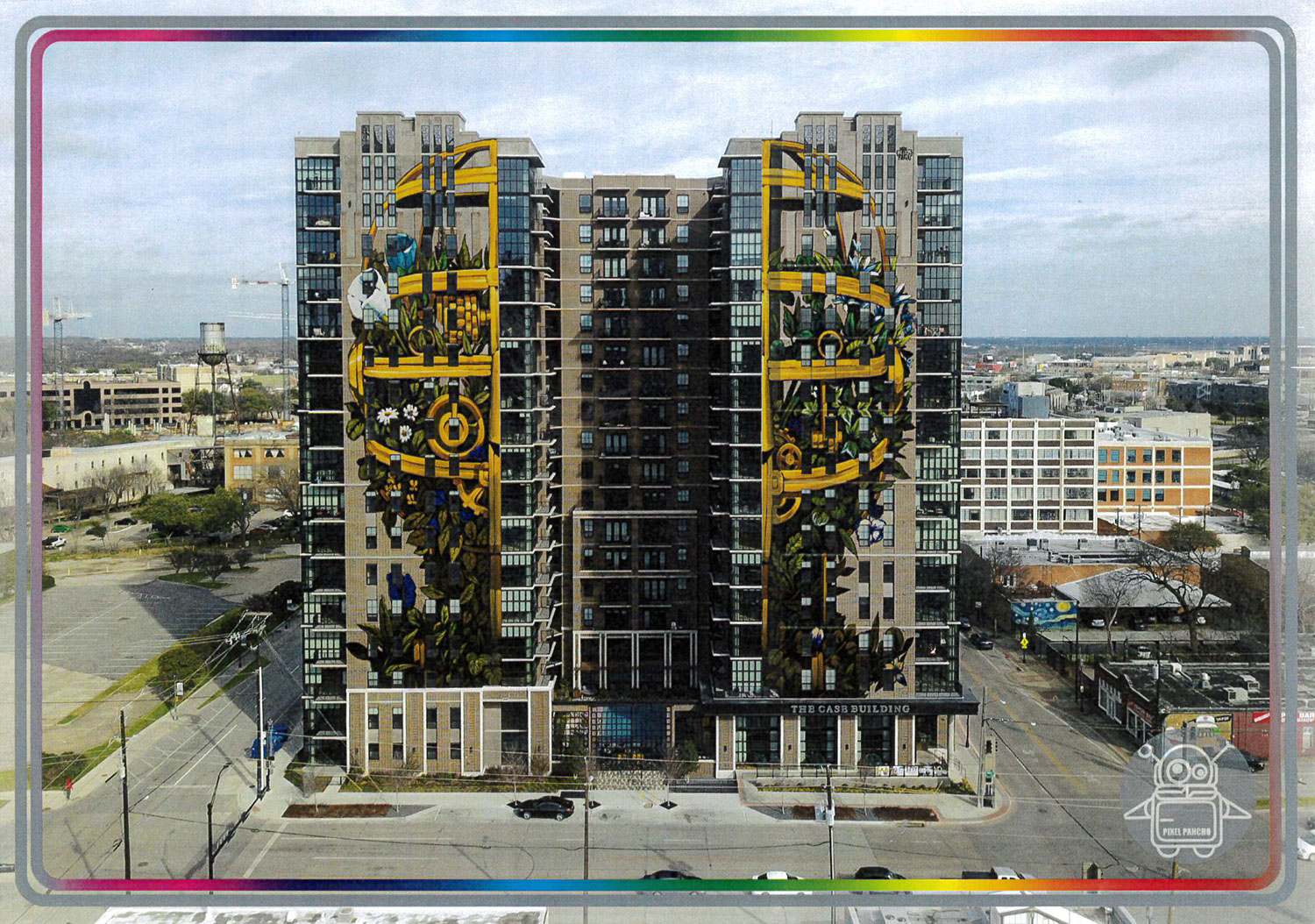 Best as we can tell, this large-scale rendition of his 2017 piece “Garden Boys” appears to be a bunch of plants coming to life within the confines of a plastic construction light cage?

That’s probably not the case; elsewhere, Pixel Pancho describes the use of plastic and/or metallic elements in his work as belonging to robots. But, considering all of the construction either already underway or set to come to the neighborhood, we prefer our read on the design, which gives it a fairly interesting “life, uh, finds a way” commentary in regards to the fears surrounding all of the area’s development. Minor quibbles aside, our greater assessment of the sentiment still seems to ring true, backed up by descriptions provided by the 35-year-old artist himself about other, similarly themed works he’s recently erected internationally. Citing Salvador Dali, Ron English and Takashi Murakami among his influences, Pixel Pancho‘s own bio describes the general narrative of his work as “driven by a forgotten world that sits under a blanket of dust.”

It’s an admirable message, no doubt — but one that also definitely feels at least a little dystopian considering its commission by the main entity driving this particular neighborhood’s sharp and sudden veer away from its natural course. Add in the fact that the building willingly overlooked Deep Ellum’s own notable wealth of renowned muralists for this job, and it’s tough not to look somewhat skeptically upon this mural’s arrival.

Alas, it will arrive soon enough just the same.

Last week, contractors raised scaffolding along the building’s Hall Street exterior. Thus week, workers will begin pressure-cleaning the brick exterior and masking the windows (with see-through material so as not to block residents’ Downtown views) in preparation for the eventual painting steps. Barring weather-related hold-ups, the project is expected to be finished by the end of October.