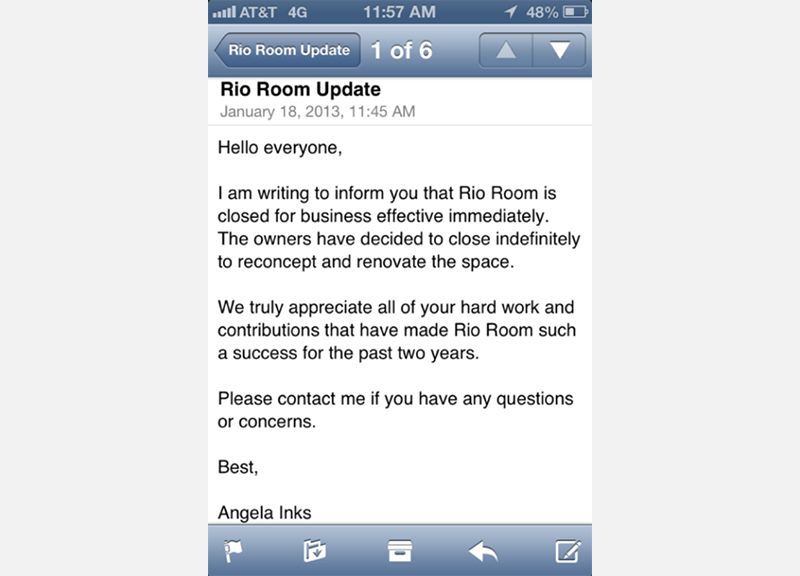 A week ago today, Rio Room employees awoke to find the following email from the club's hospitality manager, Angela Inks, in their inboxes:

There was no prior warning — just the email.

And so, just like that, the club, which had hosted everything from Dirk Nowitzki's birthday parties to DJ sets from such notable names as Cee-Lo Green, Diplo and Robyn over the course of its two-year run, closed.

All future parties previously booked and scheduled to happen in the space, including this past Sunday night's weekly DJ set from local Grammy-winning hip-hop production duo Play-N-Skillz, were canceled. Employees were stunned; worse, they were immediately out of work.

A surprising turn of events? Perhaps. For a time there, the swanky Travis Street spot was quite the draw in town, earning major points in both the bottle service and hipster scenes for its crafty blending of the ideals of those separate groups. And, certainly, the place had money behind it, too. Reclusive Dallas oil tycoon Tim Headington, who also has his hands in Hollywood as a producer for the likes of Brad Pitt, Martin Scorsese and Johnny Depp, backed the spot.

But, then again, perhaps the closing isn't surprising at all. A couple months back, Headington cut ties with the operation, selling his shares in Rio Room to its operating partners, Matthew Giese, Parker Lawson and Andrea Pambechy. In theory, nothing about the space changed; the spot still booked frequent guest DJs and served, even, as the host to a month-long pre-Lights All Night series of electronic performers. In practice, though, the once-white-hot room's reputation had tempered and the massive names once regularly expected to grace the room's DJ booth stopped appearing on the venue's calendar.

And then there's this: According to Texas Alcoholic Beverage Commission public records, Rio Room's liquor license expired last Thursday, the day before Inks' email to the staff. So, it stands to reason, Rio Room's owners knew in advance that they were closing on Friday; they just chose not to give their employees any heads up.

When approached, Rio operating partner Giese confirmed the news of the closing but refused to comment on why. He also declined to comment on any plans to “reconcept and renovate” the club, as implied in Inks' email.