Thing Of The Past. 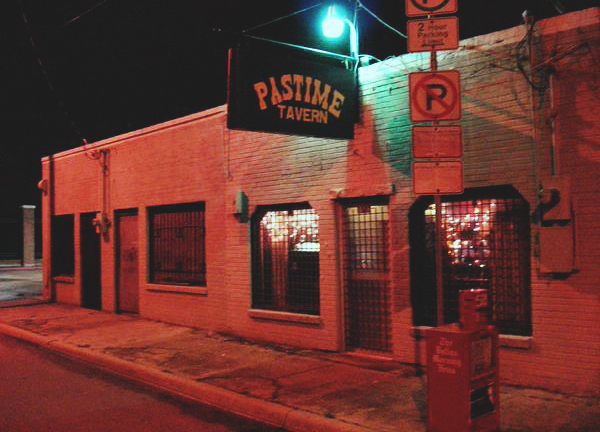 Pastime Tavern, Dallas’ Oldest Standalone Bar, Is Closing At The End of the Month.

You must have heard the news by now, but if you haven’t, here it goes: The McKinney Avenue Contemporary is moving from McKinney Avenue into The Cedars, taking over the space at 1601 South Ervay Street.

The gallery will keep its name, even though it now makes little sense. It will also expand into a five-building campus that’s expected to host a ton of shit — a wine and beer garden, a coffeehouse, a restaurant, a theater and a host of other stuff in addition to its main gallery.

Currently housed within that MAC compound is the neighborhood bar Pastime Tavern — although, come December 31, that will no longer be the case. Pastime owner Harry Hall has confirmed to Central Track that his establishment, which has been up, operating and serving booze since 1937, will be closing to make room for the MAC.

To be clear: At 78 years old, Pastime is the oldest continuously operated standalone bar in Dallas, rivaled in age only by Sons of Hermann Hall (opened before Prohibition in 1911, but standing as part of a fraternal lounge) and the Adolphus Hotel’s French Room (also opened before Prohibition, initially as the Babooland Room in 1916, but existing as part of a hotel). For comparison, Club Schmitz, which closed last April, opened in 1946, nine years after Pastime opened its doors.

In recent memory, Pastime rebranded itself as something of a music hipster dive when Parade of Flesh started booked shows to the space. That relationship eventually came to an end in 2009 due to all-ages concert concerns.

The arrival of The MAC on not McKinney Avenue but South Ervay ends any further rebranding efforts for the dive.

On the bright side and while on the subject of endangered old Dallas bars, the 65-year-old Ships Lounge appears this week to have survived a scare, with Twisted Root owner Jason Boso revealing himself as the head of a team that will be trying to keep that spot in business. Update at 5:39 p.m.: Well, never mind. Seems Ships might not come back after all. Robert Wilonsky at the Dallas Morning News reports that the Lower Greenville Neighborhood Association has opposed the Ships’ application for a late-night permit and that, without a permit allowing the space to stay open past midnight, Boso’s interest in taking up operations at the bar is waning.