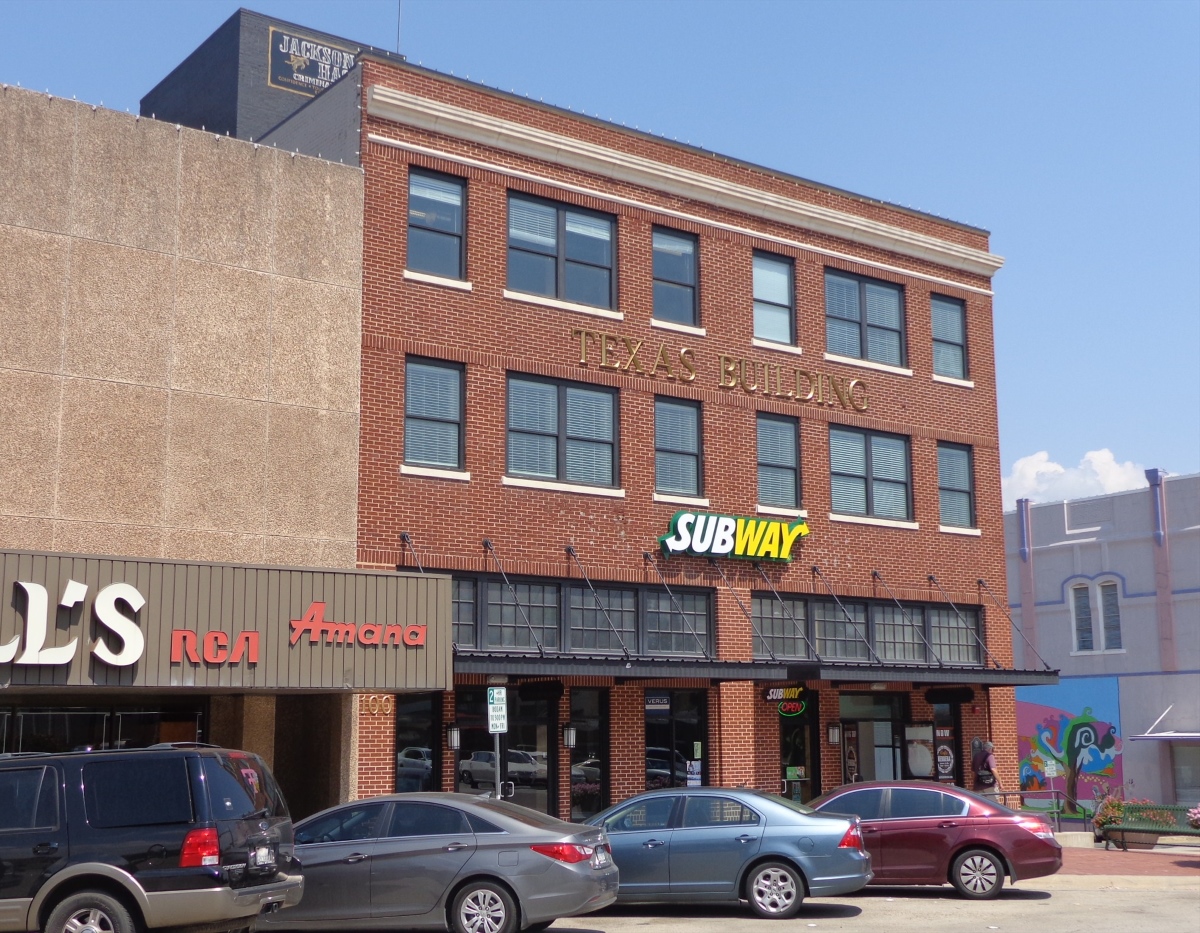 In One Year’s Time, Denton’s Subway On The Square Has Destroyed The City.

Ask just about anyone from Denton and they’ll tell you that the city suffered its greatest injustice exactly one year ago today when a Subway opened its doors on the first floor of the Texas Building on the corner of Locust and Oak in the town’s beloved square.

The mere thought of a chain (gasp!) doing business on the same city block as businesses like Recycled Books, Mad World Records, Atomic Candy, J&J’s Pizza and Downtown Mini Malls I and II — that sparked all kinds of debate before its eventual opening. It even prompted a response from Denton’s hipster politician of record Kevin Roden.

For his part, Roden did make a few salient points. Reasoned Roden: If Dentonites were really as worried about a sandwich chain coming in and sinking the surrounding mom-and-pop business or otherwise obliterating the Square’s otherwise small-town charm as they claimed, there were at least a few surefire methods of ending Subway’s reign of terror.

“Start a business,” Roden wrote. “Make it successful. Get yourself enough money to afford a lease on the Square. In the meantime, don’t eat at Subway.”

But the people did eat at Subway. In the end, the allure of cheap, heavily processed deli meats proved too much for the community to resist.

And it didn’t take long after Subway opened on the square for everything those up-in-arms Redditors feared to begin coming true.

Let’s take a look at the many ways that Subway totally unraveled Denton’s entire cultural fabric.

35 Denton Takes a Year Off (September 2013). Music used to be a pretty big deal in Denton — to the point that not one but two record stores could totally thrive just a few hundred yards apart. So, naturally, the city’s biggest music festival — and arguably its most well-known cultural contribution — would be the first thing that had to go. March 2014 passed without a 35 Denton festival for the first time since 2008. Sure, creative director Chris Flemmons says the fest will return next year, but we wouldn’t count our Oven Roasted Chicken Sandwiches before they hatch.

EagleRidge Energy Gets Its Frack On (October 2013). Last fall, EagleRidge Energy began ruffling feathers after it found a legal loophole that allowed it to drill disturbingly close to the homes of some Denton residents. Initially, the Denton City Council tried to file a temporary restraining order against the company that would have stopped drilling until the matter could be tried in court. Unfortunately, that request was denied by a judge, who was later quoted as saying that the court was simply too backed up with all the injunctions being filed against Subway to add anything new to the docket.

The Garage Promotes Grape Culture (November 2013). Back in November, the Dallas Observer caught wind that Fry Street area bar, The Garage, was serving up a tackily-named Sprite and grape vodka shot called the “Statutory Grape.” While the author of that piece attempted to point out the egregiousness of this offense, pretty much everyone else that opted to chime in via the site’s comment section and Facebook page strangely defended the bar’s casual promotion of rape culture. Wrote one astute commenter: “In a world where down is up and Subways are allowed to open on the Square, who around here really knows what’s right or wrong anymore?”

Denton Square Donuts Closes Shop (February 2014). For two years, this quirky little doughnut shop helped keep Denton Beard with its unique brand of square-shaped donuts and pastries. It was a formula that worked well enough, too — until Jared from Subway began showing Dentonites the proverbial light. “Who knew doughnuts were so unhealthy?” said a guy playing an acoustic guitar on the courthouse lawn. “I guess it’s Footlong Chicken & Bacon Ranch Melts for me from here on out.”

Little Things Happen Here (April 2014). Taking one of the lamer pages from the Dallas Visitor Bureau’s playbook, oversized block letters spelling out “Lil’d” appeare in front of Oak St. Drafthouse in April. Just like Dallas’ tourism campaign, the letter “i” was missing so that Denton residents, too, could remind their own Instagram followers that they did indeed like to make a huge fuss out of the seemingly little things indeed happen in Denton all the time — y’know, like when that one Subway opened.

Parquet Courts Distances Itself (May 2014) Since relocating from Denton to New York several years ago, the members of Parquet Courts have become one of the most talked about bands of 2014. Back in May, the website Grantland — which typically dedicates most of its time to sports — published a nearly 4,000-word feature on the outfit that called them “the last great New York band.” We think the band’s decision to distant itself from its former hometown had something to do with the inherent inauthenticity of a restaurant which bases its primary motif on one of the most storied forms of public transport in the world — and in a town where the train doesn’t even run past midnight, no less. Also? Also? Said restaurant now takes up primary real estate in close proximity to several clubs in which the band’s members once cut their teeth. (We think. Let’s face it: tl;dr.)

Sriracha Passes on Denton (May 2014). Back in October, when it looked like the city of Irwindale, California, was about to send the Huy Fong Foods factory packing, Denton began its bid to lure the Sriracha-making plant and all its noxious-fumes-producing glory to town. Those dreams, however, died after just a few months. While the city of Irwindale’s change of heart did factor somewhat into that decision, the Subway on the Square wasn’t entirely without blame — or as the ersatz Mr. Fong so eloquently put it, “If those people can’t even handle the scent of fresh-baked Italian bread, what would they think about us?”

The Music Scene Turns On Itself (May 2014). They initially put forth a commendable effort, but after nearly 10 months of staunchly refusing to give their hard-earned dollars to the world’s largest fast-food chain, members of Denton’s normally amiable music scene had little choice but to begin cannibalizing one another. Far as we can tell, it was Chambers — who everyone now seems to hate — that received the biggest brunt of the fallout. Maybe we’re reading too much into things, but we have it on good authority the band’s frontman has a weakness for Sun chips.

Denton Keeps on Fracking (July 2014). Denton had a chance to make history by becoming the first city in Texas to ban fracking outright. But, after eight hours of public testimony from the over-100 residents who signed up to speak at Tuesday’s City Council meeting, the members of the city council voted down the petition. Said one frustrated Dentonite following Tuesday night’s meeting: “Big Sandwich screwed us pretty badly, so I’m not sure why we expected any different from Big Oil.”