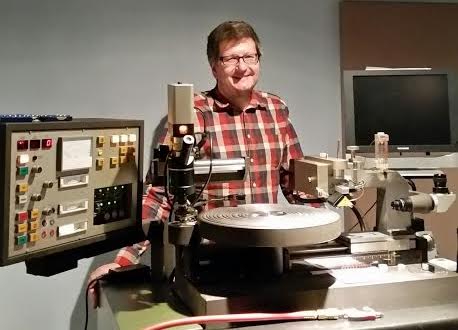 Meet The Chicago Man With A Hand In Most Every North Texas Album.

Even among the biggest music fans, the mastering process is something that almost never comes to mind. Hell, I’d venture to say that even many artists — people actually making professional records — these days would be hard-pressed to tell you with much accuracy what exactly is involved in the magically mysterious process of taking a final studio mix and prepping it for mass reproduction.

One thing a huge number of Dallas, Fort Worth and Denton musicians have seemed to figure out, though, is that when it comes time to master their own records, there’s really only one guy for the job: Carl Saff, the Chicago-based mastering engineer who, since 2005, has been putting his stamp all over the North Texas music scene — except, y’know, not really. In the words of the Saff himself, the best mastered discs are the ones where you’re not thinking about the mastering at all.

It’s a philosophy that’s helped him really corner the North Texas market. To wit: Quaker City Night Hawks, Blackstone Rangers, Sealion and Nervous Curtains are but a fraction of the popular DFW acts that have relied on Saff to put the finishing touches on their records in the past decade. That long-in-the-works solo debut from Brent Best that earned its release today? Yup, Saff worked on that one, too.

Those, of course, are just a few of the things he’s worked on between mastering projects for Guided By Voices, Someone Still Loves You Boris Yeltsin, Bass Drum of Death, Speedy Ortiz, STFRKR, Jacuzzi Boys, Smoking Popes and Purling Hiss. Dude’s got some highly respected ears, to say the least.

So maybe it shouldn’t be such a shock to learn that North Texas’ go-to mastering engineer is a guy who live 900 miles away.

“There are pockets that work for me all over the country,” Saff says. “It’s definitely the case that Chicago is not the bulk of my work. I would say I get about as much work from Chicago as I do everywhere else — which is good, because you never want to be relying on one market alone. I designed the business from the outset to be extremely friendly to people coming to me from far away. When I started in the early 2000s, that would be the model for success for any mastering business — to be less reliant on your local scene and to be able to make people happy in the next state over, in the next country over, overseas… Every week, I do almost as much work for people overseas as I do from the U.S. Fortunately, people find it’s an easy way to work. I’ve made it as easy as I can for people to not be here working on the record with me.”

After weathering the dial-up era of the ’90s, Saff eventually adopted a system with a large server, a super-fast broadband connection and a type of software that allows clients to download lossless, CD-quality files from wherever in the world they may be. It’s not only helped him cut down on the cost of shipping physical reference discs around the globe, but to also greatly expand his business in the process.

“Most jobs are 100 percent online and, these days mostly, the final deliver is all electronic, too,” he says. “At this point, physical optical media for delivery is almost never required. Some people want it, but they’ll never actually need it.”

So it’s no wonder, really, that he’s become such a player in the local scene from afar. Tracing back exactly how that came to be, though, is still pretty interesting. Coming up in the Bloomington, Indiana, post-punk scene, Saff wound up recording many bands that wound up signing to Bloomington-based indie label Secretly Canadian. When he eventually got into the mastering game, that too was the first label to call on his services. Happy with his work, that company then hipped several other labels to him, including the Austin-based Western Vinyl. Then, in 2004, Dallas’ Salim Nourallah recorded his debut solo record, Polaroid for that label, which is where he first became aware of Saff’s work. Nourallah, who opened his Pleasantry Lane studio just a year prior, subsequently began referring his own clients to Saff, who says things just snowballed from there.

“Salim has been huge,” Saff says. “He referred me to so many people and so many studios. And a lot of people that I worked with through Salim went on to start other bands and work at other studios. It’s crazy how quickly you can become well-known just by working with somebody that’s so integrally a part of the scene like Salim is. Denton’s another huge pocket for me, because of Matthew Barnhart and Justin Collins at The Echo Lab, another place I’ve done numerous masters for. Both of those engineers now do work other places as well. That was another one that had ties to Dallas. A lot of Dallas bands go there to record.”

For anyone even paying the slightest attention the local music scene, it’s next to impossible to have avoided hearing Saff’s work — even if, for most of us, his still isn’t a household name. But that’s pretty much by design. Most often, Saff likens his work to the guy whose job it is to frame pieces of fine art for museums. And it’s true, most places don’t include that guy’s name on the little plaques that hang next to their paintings.

“The real art of making a record is what happens when the music is performed in studio and captured just so based on the engineer’s inclination and the band’s wants and needs,” Saff says. “All of that is assembled via mixing into a final vision. That’s where the real artistry happens. Mastering is just the framing of that art. You just select the right frame, select the right wall, select the right lighting and get it looking just right to the customer that’s buying it, so that when they’re listening to it, they’re not distracted by anything technical at all.”