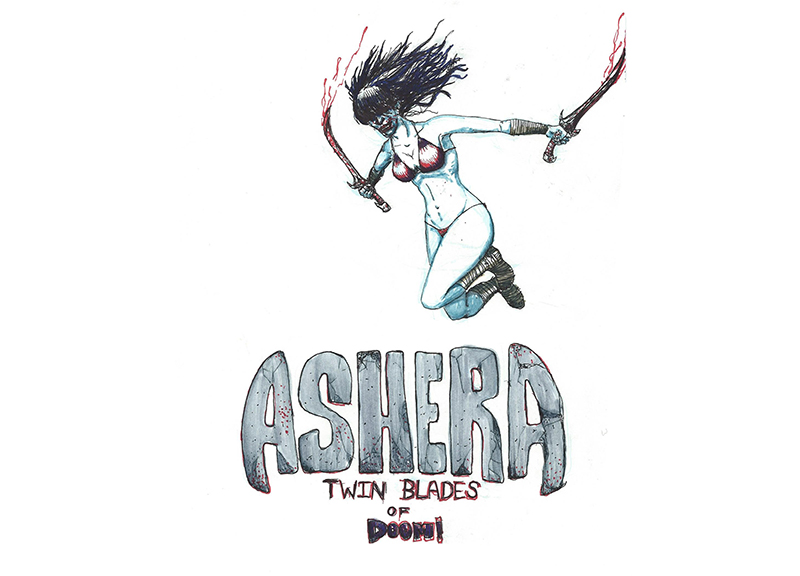 Son of Stan Is Off On Its Own Trip. And Everyone Wants On The Crazy Ride.

The lights above the stage stabilize and drone as the members of Son of Stan saunter into place.

Jordan Richardson is the last to come into the lights. His back is facing the crowd and his head is reared back as he takes a quick swig out of a Jack Daniel's bottle. After quickly handing the bottle off to his drummer, he finally turns around and looks out at his crowd, the yellow Kauai trucker hat tilting back on his head and letting the lights hit his grinning face full on.

Son of Stan's bassist, Steve Steward, stands off to Richardson's left, mostly in shadows. He waits for Richardson to handle the introductions, standing stark-still on his piece of the stage. Steward and Richardson have worked together on quite a few projects, and, at this point, each are well familiar with one another's roles and personalities.

But this is somewhat of a unique scenario for the longtime friends and collaborators. At this show, just a couple of weeks removed from the release of its five-song Georgia EP, Son of Stan is opening for Los Angeles-bred Warpaint in the seventh of Red Bull Sound Select's “30 Days in L.A.” November series of concerts.

A modest crowd fills the room; Son of Stan is the first act on the bill, and the doors to the Echoplex only just opened. But Richardson worries not about the crowd's size. Rather, he and his band just launch straight into the '80s-tinged, power-pop intro to “Corsica,” the lead single off of Divorce Pop, Son of Stan's debut LP, which earned its release last fall.

It's a high-energy, if par-for-course, start to the set. At this point in his career, Richardson doesn't give much thought to the sizes of the venues he plays in, much less the numbers out in the crowds. At 33 years old, he has already built up an impressive resume for himself: As a drummer, he's performed alongside such monstrous names as Ben Harper, Eddie Vedder and Ringo Starr; he's seen Radio City Music Hall packed to the gills while he sat upon a throne encompassed by snares and cymbals, with a bonafide Beatle perched just to his left; thanks to his work with Harper in particular, he's won a Grammy.

So, no, suffice it to say that Richardson doesn't gauge the success of Son of Stan on whether or not his band can pack a thousands-capacity stadium. He knows better than that.

“Having a career in music,” he says, “is already miracle enough.”

“You hear stories of the drummer pining to be the frontman and stuff like that,” Richardson says with a laugh a few days after that Los Angeles gig.

And, for sure, he's hard them more than most. When he first stepped away from his role in Harper's Relentless 7, he heard those jokes almost constantly. But, in Richardon's eyes, the move from that band toward Son of Stan wasn't about that title of frontman. More than anything else, he simply wanted something that he could call his own, something that he could wake up and know he controlled, something that would give him peace of mind.

He's had some success with that, too. Today, Son of Stan has become an immediately recognizable name in the North Texas music scene. But the name is equally recognizable in Richardson’s former home base of 10 years in Los Angeles, too. Since moving back to his native Fort Worth in September, he's flown to L.A. three times for Son of Stan shows — moves made specifically so as not to shun either of his hometowns.

“L.A. is always a good city to live in if you're never there,” Richardson says. “But there's just a lot of stuff happening here [in Fort Worth] right now, too.”

One of the bigger things happening in Fort Worth is a joint creation of Richardson's and Steward's. Around the time Richardson was working on Divorce Pop, the two began hatching an idea for something that included that then-upcoming Son of Stan release, but also some much larger. Eventually, that idea would become WizardVizion, a record label and production studio in Fort Worth. Today, the label works with a number of notable area bands — EPIC RUINS, Vorvon, Bummer Vacation and more — along with Son of Stan itself.

Richardson, for his part, couldn't be happier about all of it.

It's his new future. And it's kind of a weird one.

In early 2009, right around the time when Richardson was facing his own crossroads, Steward too was in a state of change. He was unemployed, recently single from a long-term relationship and, making matters worse, the band he'd played in for seven years had just dissolved.

“I was scraping by on bartending and freelance [writing], and had a lot of time on my hands to smoke weed, listen to records and draw,” Steward says.

Around the same time, he discovered the British doom metal band Electric Wizard — and specifically its 2000 LP, Dopethrone. Blazed and stuck on his couch listening to that album one night, he texted a friend that he was “so wizarded right now,” a phrase that he and his pals quickly re-appropriated as slang for being stoned. But it ended up being more than that: It became the inspiration for all of his creative pursuits.

“I can literally say that Dopethrone was a life-changing album for me,” Steward says.

During this time of copious weed-smoking and dicking around, Steward developed a character that his would-be WizardVizion “multiverse” would centered upon. A week before he and Richardson met up in August 2009 for a recording session in Fort Worth, Steward wrote an entire log of songs about a character named Ashera and another one named the Void Mariner, who would work together to defeat the monster Kreg. Thus, EPIC RUINS' Void Mariner and the Mystic Boogie of the Sacred Line was born.

“We had this idea of creating a classic rock record that didn't already exist, and that’s how EPIC RUINS came about,” Steward says. “[Jordan and I] co-wrote that album and we got our friends to play on it. That sort of kicked off the creative process of what we’re doing right now.”

The idea of this WIzardVizion multiverse spawned from Steward's interest in authors such as sci-fi and horror writer H.P. Lovecraft. Steward wanted to emulate the way Lovecraft would link separate stories together through connecting characters or events in spite of space and time differences. Ashera was the one that started it all.

“She became a character in a song from EPIC RUINS' Void Mariner and the Mystic Boogie of the Sacred Line called 'Unnamed Boogie (Ashera Theme),'” Steward says, recalling the first incarnation of the character.

Steward even drew a sketch of Ashera. And, clad in a a skimpy swimsuit and clutching two swords, she certainly looked the part of a Conan-era warrior woman. Explains Steward: “From there, I kind of extrapolated this multiverse based on the idea that there was a cult comic book anti-hero named Ashera, who was made into a couple of movies during the sword-and-sorcery boom of the early '80s.”

Ever since the very first WizardVizion-produced albums, plans have been in place to lay an intricate and outlandish groundwork for this massively grandiose idea — one that, so far, only exists in Steward and Richardson's minds.

“In our own bands, we try to make vague lyrical references and sort of topical references about these certain hotplates we foresee in the WizardVizion universe,” Richardson says.

The goal here is to create an entire narrative. One that, eventually, could make its way onto film.

“It's kind of a wild stretch of the imagination,” Richardson admits, explaining how all the bands involved in WizardVizion will make odd references in their lyrics to a future that no one but Richardson and Steward knows anything about.

The payoff, these two hope, will play out in a film called Dealership that will center around a sleazy car dealer in North Texas in the 1990s — perhaps expected content given that Richardson's music in Son of Stan is built around the trends and sensibilities of the '80s and '90s. Richardson swears that all of this is being hinted at in the work of Son of Stan, EPIC RUINS and Vorvon. Specifically, Son of Stan's three music videos are supposed to be dropping major hints toward the future of the WizardVizion universe. The most obvious reference seems to be in Son of Stan's most recent video for “Loseyomind,” which appears to introduce the Ashera character in the flesh.

“We're trying to plant this seed of what all this stuff sort of means,” Richardson says, doing his best to skirt around saying anything too revealing. “Hopefully, someday, when people unearth all this stuff, they can connect the dots of some of it.”

Long story short, says Richardson: “We're writing soundtracks for films that don’t exist. We aren't making money off of it yet. Hopefully, we're making art, because that's the definition of it.”

Luckily, the pursuit of this bizarre narrative doesn't consume all of WizardVizion’s time or resources. There are other, more fruitful efforts at play.

Simply existing as a label in Fort Worth is one of them — and one that seems to be working out. For the past few years, Richardson and Steward have carefully crafted WizardVizion to become arguably the record label of Fort Worth.

It's a simple formula at play across North Texas: If you see a WizardVision act on a bill, you go to that show. And, when you do, you'll see a majority of the WizardVizion team there — and not just because so many of the label's bands share more than one member, but because the whole team believes that there's something to the craziness behind Steward and Richardson's plan, even if it's sonically a disparate one.

Says Steward: “I don't think there's a WizardVizion sound,” and it's that way on purpose. He doesn't want the label to be a one-trick pony focused on a single genre. The idea is for it to be a broad, collaborative collective.

It's a concept that North Texas bands and fans alike are buying into. And, back at that Red Bull show, it seems the same can be said of the crowds out in Los Angeles, too.

By the time Son of Stan's set nears its end and Richardson has flashed more than a handful of his now-trademark mid-set high kicks, the room has started to approach its capacity. Better yet, the crowd is compelled by what Son of Stan is sharing. The audience cheers enthusiastically at the end of each song.

Richardson, for his part, could't look more pleased. Somehow, his goofy antics are finding an audience. No wonder he smiles all performance long.

“It's like building model airplanes,” Richardson says, recalling that moment a few days later. “I'm trapped away in my basement and no one is paying me for it. But it's my passion.”

Posed photo of Richardson and Steward by Karlo X. Ramos. All other photos by Scott Mitchell. 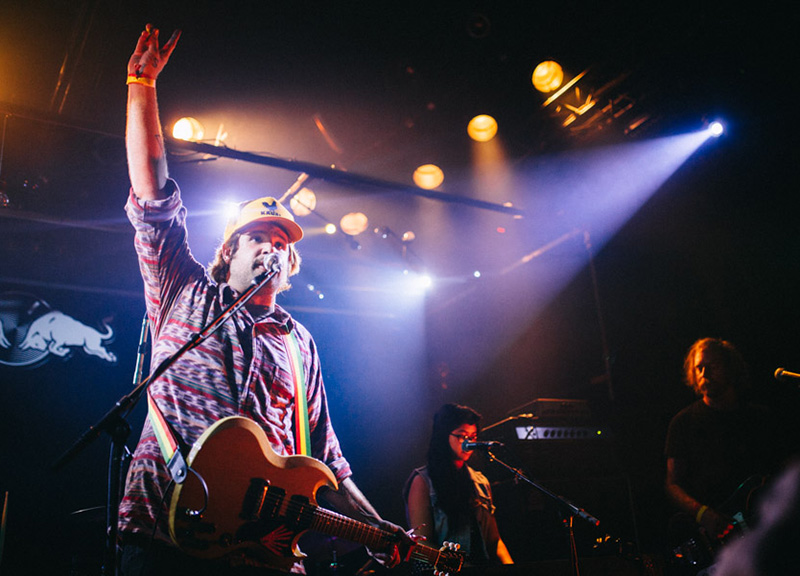 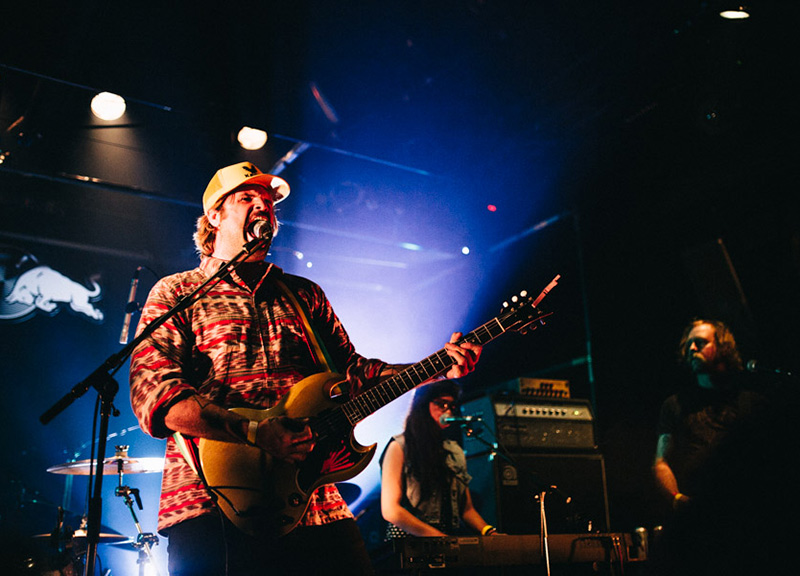 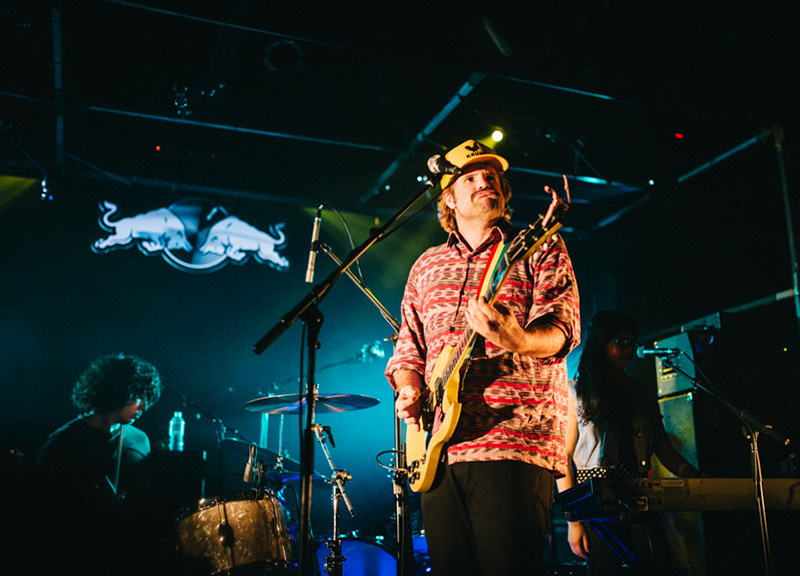 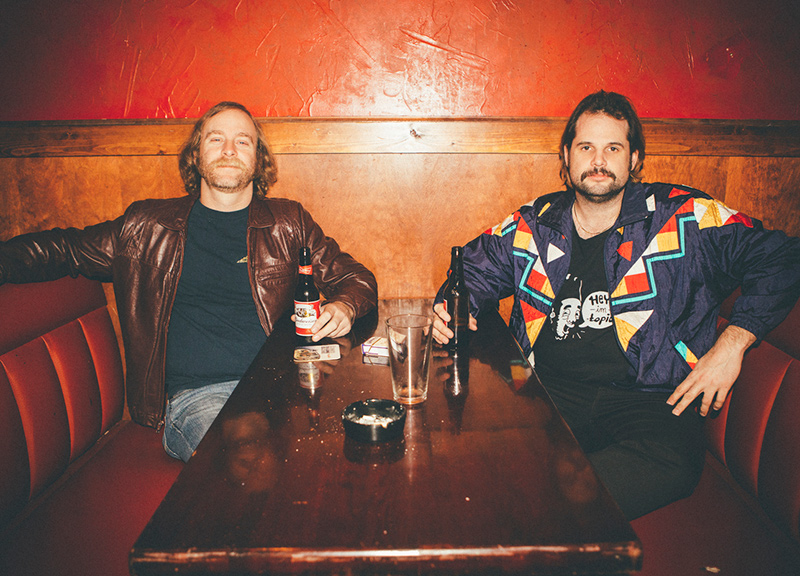