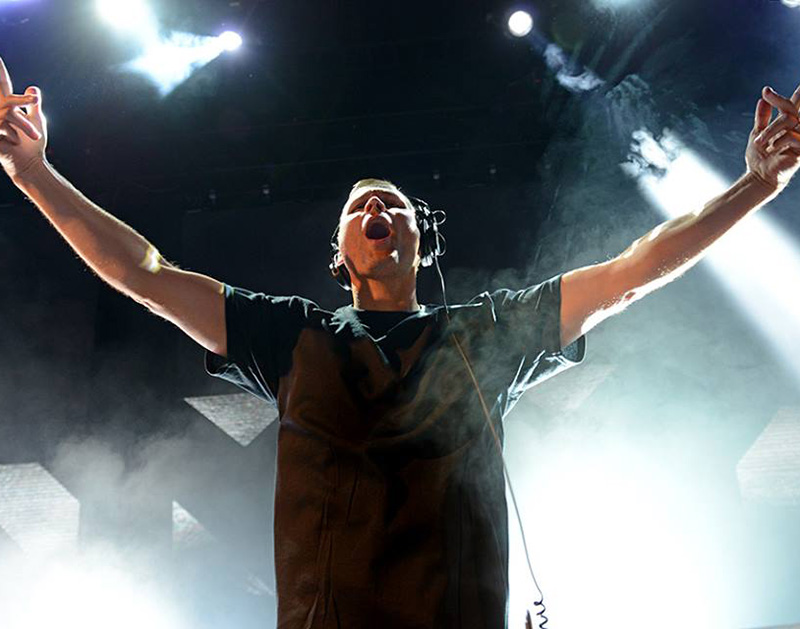 If You Bought Non-Transferable Tickets To Kaskade’s Dallas Show In November — Or Any Other Show For That Matter — You May Have Missed Some Fine Print.

After being lucky enough to score his tickets as soon as they went on sale on Monday, local Kaskade superfan Juan Rodriguez is all the way ready dance and rage the night away at the internationally acclaimed DJ’s intimate set scheduled to happen at the It’ll Do Club in Dallas on November 10.

Alas, the same can’t be said for the dozens of people commenting on It’ll Do’s Facebook page about the 12 p.m. Monday online ticket sale, wondering out loud if tickets to the intimate performance really did sell out in just two minutes and questioning what options they’re left with now.

Their frustration is perhaps understandable. Tickets sold to the Kaskade show through Eventbrite are not transferable, meaning that a purchaser might not be allowed into the venue if the name on the ticket doesn’t match the presented ID. In other words? If a Kaskade fan wasn’t able to get a ticket to the show during Monday’s rush, third-party ticket providers likely won’t be able to help them get in the doors — not even at a significant price markup.

Still, that didn’t stop some entrepreneurial types from trying to turn their scores into quick turnaround cash.

.@kaskade not sure who these people are but calling them out for price gouging #dallas #REDUX @Itlldo_dallas @KaskadeKonnect pic.twitter.com/7VIr37FAH0

At first, the DJ was on the defensive about the complaints, claiming that the screenshots were of fake tickets and urging fans not to buy them. But the next day, his tone on Twitter changed: 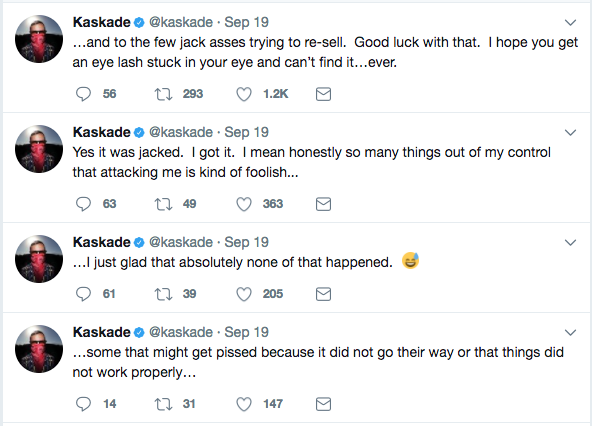 Rodriguez, though, was able to snap up his tickets to the show thanks to a special presale code that granted him access to Eventbrite’s ticket sale page.

“If I’m really passionate about an artist, I’m adamant about signing up for emails for presale codes,” Rodriguez says. “I’m glued to the computer, hitting refresh over and over.”

Amola Abrol, a 44-year-old EDM-loving Dallas mom, wasn’t so fortunate, despite having the same presale code Rodriguez had and already having her credit card information listed on Eventbrite from earlier purchases made with that company. Disappointed, she skimmed third-party ticket sites on a lark only to find tickets — ones that might not even get her in the door — going for $400.

“At that rate, I might as well fly to Vegas,” she says. “I might still try and go to the New York show, where I’m sure the venue will be bigger.”

Traveling to a show in another market might be a better option anyway.

Buying non-transferable tickets from resale sites often leads to sad endings — something hundreds of Foo Fighters fans in London learned last night when they were turned away at the gates after the names on the tickets they held in their hands did not match the names on their IDs. The band and that show’s promoters put out a press release today offering apologies for the confusion — but they remained adamant about the original policy, which clearly stated that ID and ticket had to match.

That’s a stance It’ll Do is taking early on in the process, attempting to cut off any potential complaints about the policy at the pass.

Kaskade Redux tickets are not transferrable FYI. do not purchase scalped tickets. #Kaskade

Of course, not all concert tickets are non-transferable. But some, like the Kaskade show, are sold that way for a reason, adding to the exclusivity of an event. Ticket scalpers are ready to take advantage of that, though, which is why a $40 ticket can be sold for $200 or more even if it turns out to be a dud of an entry pass.

Fortunately for live music fans, some ticket vendors are at least somewhat looking out for them. Eventbrite and many of its competitors have added measures like Captcha codes and limits on tickets per customer to their purchasing processes to prevent bots and ticket scalpers from taking advantage of the system.

Still, it’s clear that scalpers did manage to get hold of a few dozen tickets to the Kaskade show, and that people are unwittingly buying them on secondary markets, none the wiser about the potential turn-away fate that awaits them at the doors on the night of the show.

Rodriguez, for his part, says he hopes people don’t take that bait and buy useless tickets going for as much as five times their listed rate.

“I think it’s ridiculous that these tickets would be price gouged that much,” Rodriguez says. “I commend Kaskade for being vocal about this, but you can tell the system failed here.”