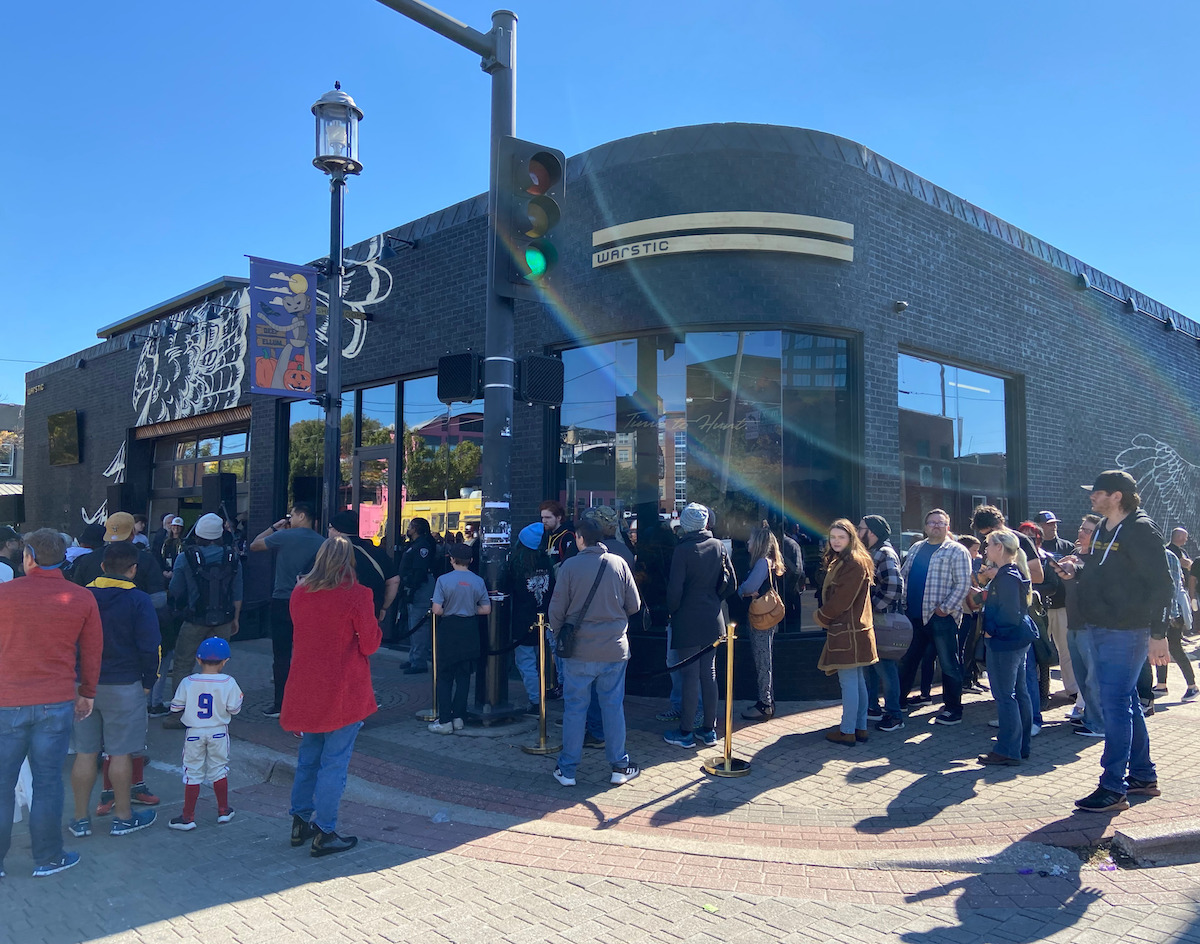 There Was More That Went Down At Warstic Sports Inc’s Opening, Including A Special Jack White Performance.

Two hours before opening, a special combination of baseball and rock fans waited in line outside of Warstic Sports Inc.’s with baseball bats, jerseys, guitars and the White Stripes vinyl records for the grand opening of Deep Ellum’s newest sporting goods store.

A crowd of fans circled around the front door just past noon as the men of the hour, Dallas graphic designer Ben Jenkins, retired baseball player and former Texas Rangers Ian Kinsler and rock ‘n roll icon Jack White, welcomed the crowd. Sporting his outstanding blue, combed-over hair, White cut the ceremonial ribbon to the doors of the multi-functional and interactive facility. 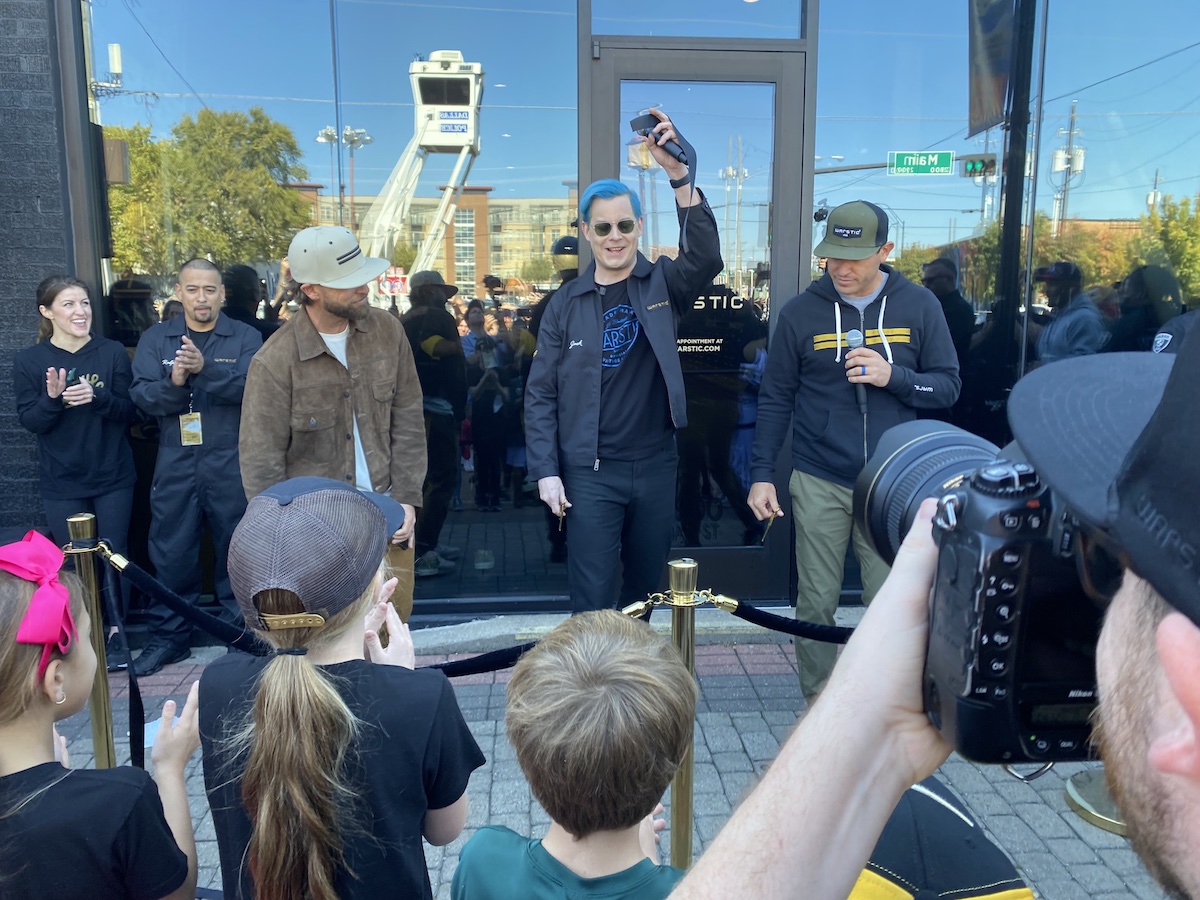 “Having everything in one roof to really showcase a good connection, come in and see what this company is all about, what we’re trying to accomplish and to be part of it too,” White said during Warstic’s Instagram live session before appearing to the public. “And to be able to walk into a place not just a place to buy a t-shirt or something, this is a place where you’re going to be fitted for a bat where you can make a custom bat here, where you can buy a new baseball glove or you can have a trainer teaching you in the batting cages new techniques.”

Fans were treated with a festival of events that included sports clinics, guest speakers, a youth sandlot baseball game, and a celebrity sandlot match-up between White’s White Bison and Kinsler’s Gold Hawks teams.

“I mean, there are so many people that have helped us get to this point,” Jenkins told the crowd. “It’s insane.”

Once inside the 8000-square-foot-space flagship headquarters, fans were immediately drawn to the variety of the Warstic’s uniquely designed baseball “stics” that the brand is known for. But the small, storefront is only a part of the experience. This impressive store fits a training and educational center, a custom wood bat design studio and factory, a coffee shop, a speakeasy and more. 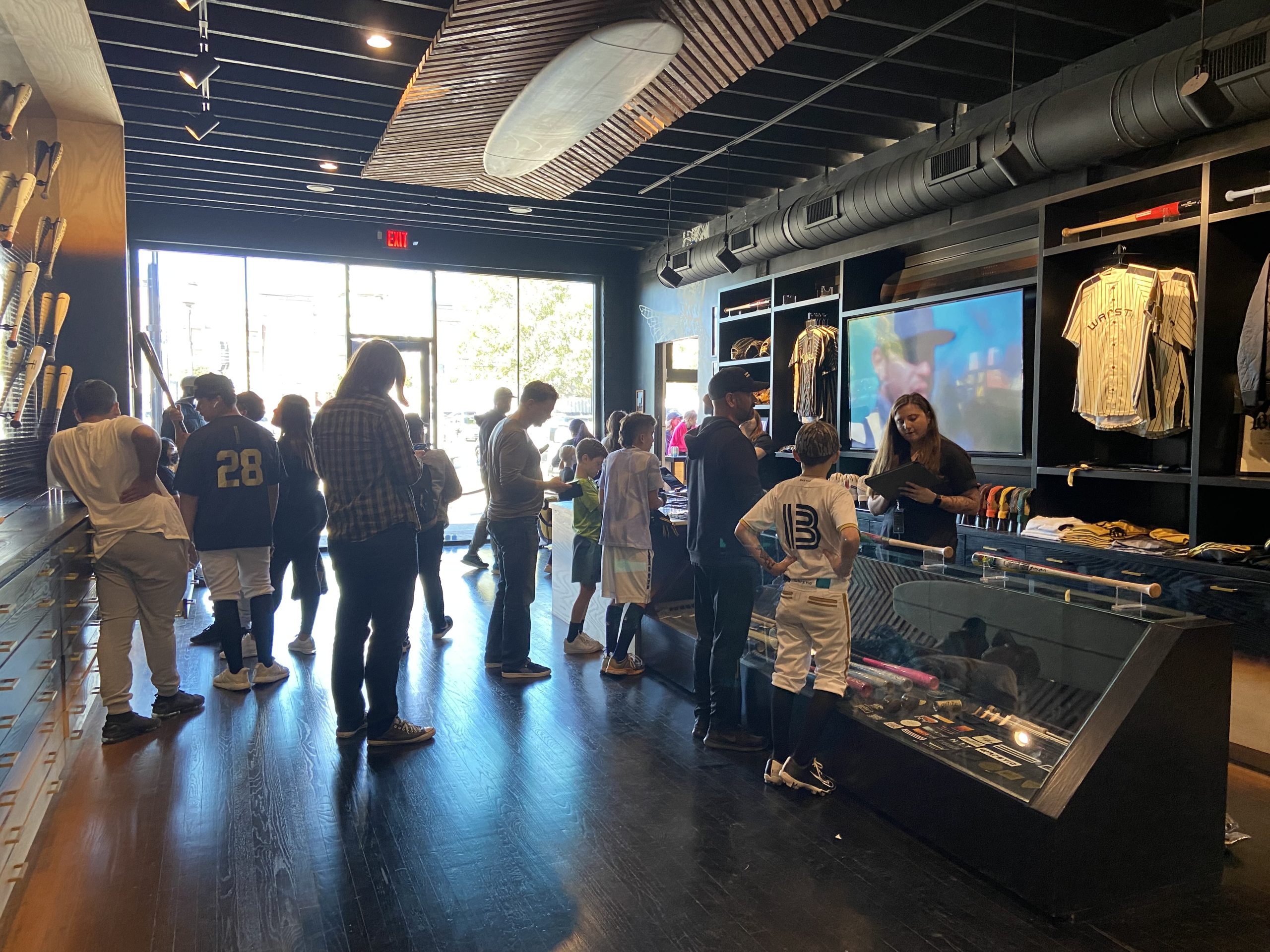 White may have been the main attraction, but fans were treated to watch current and former Major League Baseball players hit some baseballs in the Battle Hall, the store’s training center, and autographed on an array of merchandise in the Hall’s dugout.

Even better, the event was also a Rangers reunion with former shortstop Elvis Andrus, who currently plays for the Oakland Athletics, retired outfielder David Murphy, and retired infielder Michael Young and Kinsler in attendance. It sparked a reminder that these Rangers legends helped the team reach back-to-back World Series.

Those were good times for Rangers fans.

Fans also got to see comedic hits of retired Oakland Athletics pitcher Dallas Braden, who if you remember, pitched a perfect game, the 19th in MLB history.  Up-and-coming baseball stars who appeared were Brent Rooker an outfielder and first baseman for the Minnesota Twins and Jake Mangum who is currently the outfielder for the Binghamton Rumble Ponies, a Double-A affiliate team of the New York Mets major-league club. 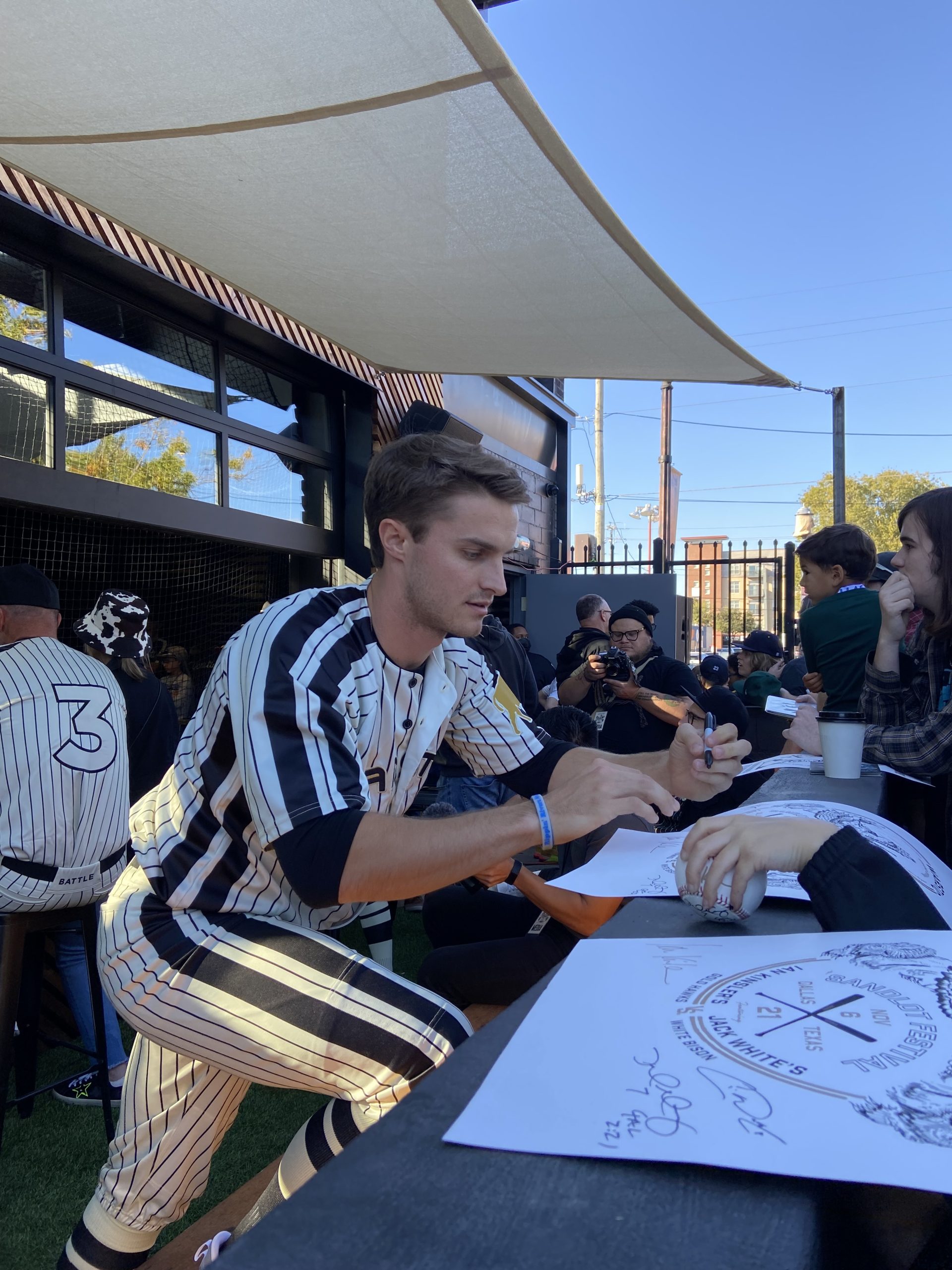 After White hit a couple of baseballs, fans again waited to see if he was going to sign autographs. White finally made his way to the crowd where fans rushed to him hoping he would sign White Stripes vinyl and solo albums. 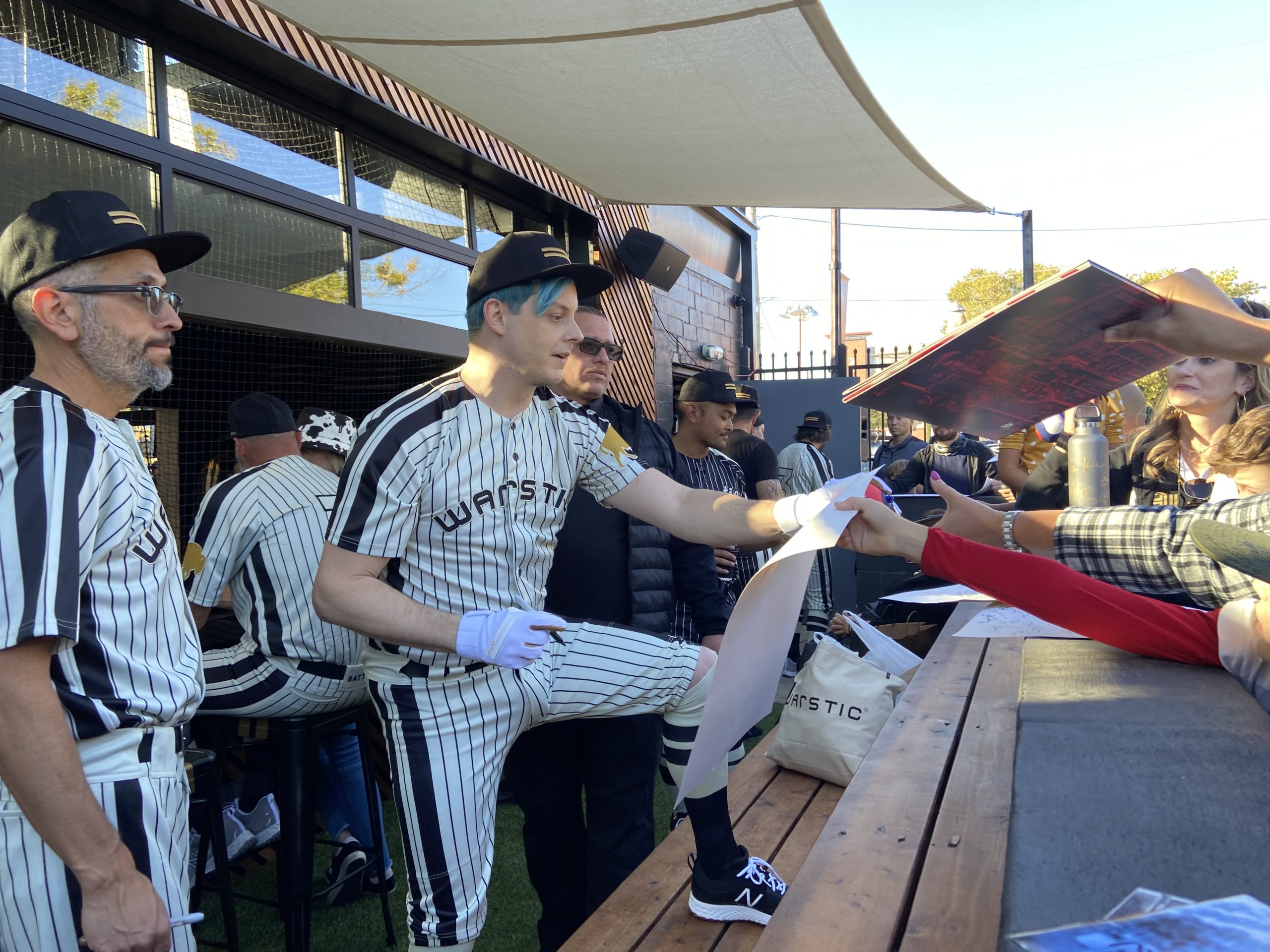 After the batting practice, fans made their way to the Texas Rangers Youth Academy where White’s White Bison defeated Kinsler’s Gold Hawks.

Also on opening day, Warstic’s Twitter announced White was going to perform a private show at the speakeasy basement and that three lucky fans got a chance to watch the performance.

The night ended with a private performance by White were, unfortunately, since the performance was private, fans only got to watch the performance outside the store where a flat-screen TV was set up outside of Warstic. White performed a setlist from familiar songs such as “Lazaretto”, “We’re Going To Be Friends” and of course every sports fan’s favorite, “Seven Nation Army.”

Who knows, maybe the Warstic opening ceremony may have made you a bigger baseball fan than White, which most likely won’t.

Edit: An earlier version of this story mistakenly identified one of the guests at Warstic’s opening event as Hollywood actor Bradley Cooper. Turns out it was another handsome bearded man, Craig Rich, who’s part of the Warstic sandlot team and was introduced as “Bradley Cooper,” his nickname.