What My Band Learned On Our First-Ever Aussie Tour. 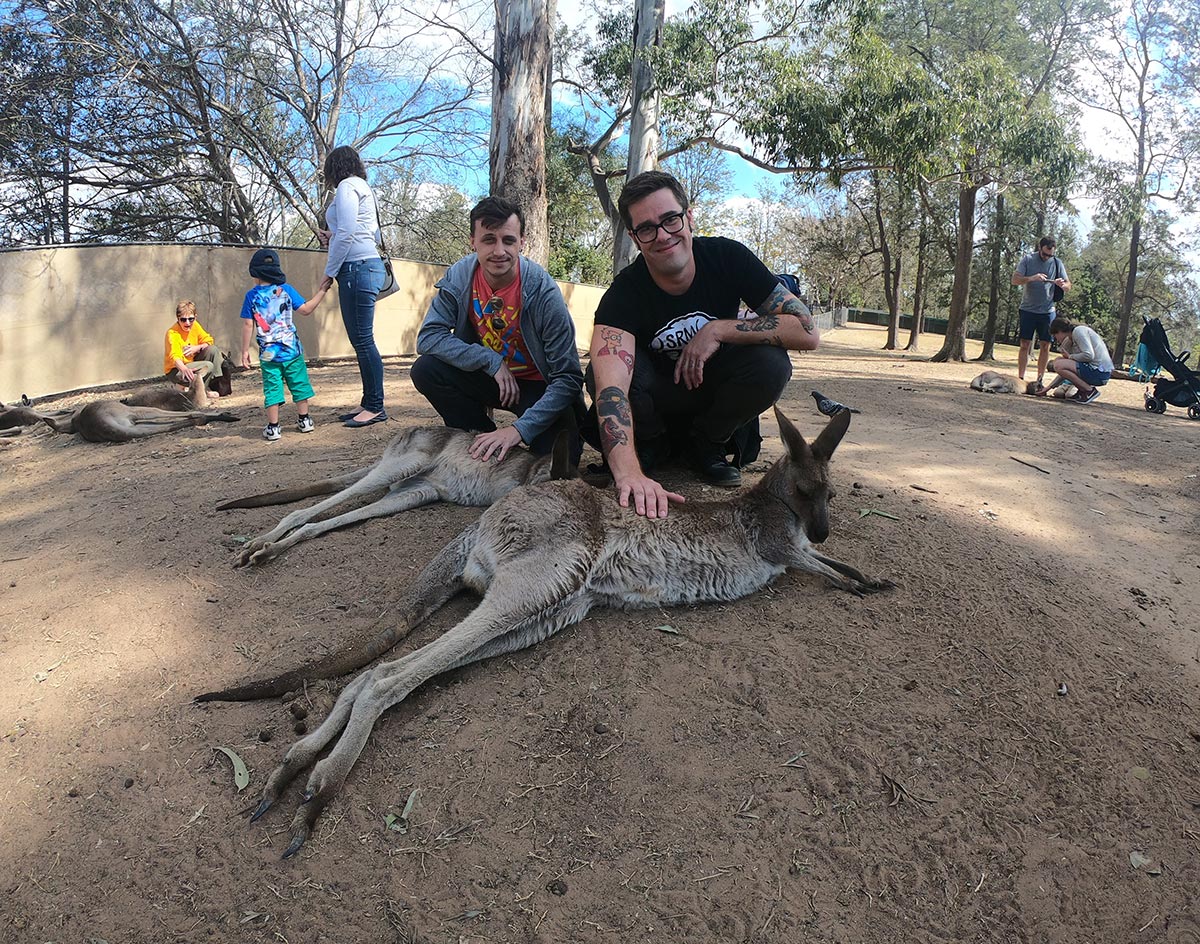 My Humble Dallas Punk Band Has Toured The States And Canada Previously — But Getting To Tour Australia Was A Whole New Kind Of Experience.

The first colloquialism my band learned during our first-ever tour to Australia was also the best: “We didn’t come here to fuck spiders.”

A DIY punk band like mine can learn a lot on a tour like this one — including the meaning of the above phrase, which essentially means “We didn’t come here to fuck around.” If you ever find yourself booked to tour Australia as we were — and you’re not in some gnarly, must-listen-to band or maybe riding out a rad opening tour slot — that’s the mentality you have to have.

You can’t fuck around.

And let me tell you: The people in Australia won’t have it any other way. We learned that early on, too.

Some background first. My name is Ben McCracken, and I play guitar and sing in the Dallas band From Parts Unknown along with my bandmates Chris Parrish (upright bass), and Jimmy Sefcik (drums). For a little over five years now, we’ve been blending elements of punk rock, country, metal and a little bit of reggae into our sound, which we’ve released out into the world in the form of a full-length album and three EPs — including our newest, s8n, which we released this past July and which you can listen to on most streaming platforms. s8n is our most eclectic project to date — it showcases our varied musical leanings, from hardcore-tinged punk rock to Clash-inspired ska to cow-punk, and is the result of us actively pushing ourselves to our limits. I’m personally stoked with the way this album came out, and even more excited that others have seemed to dig it, too.

In 2018, we started gaining a little traction in Australia — write-ups in a few magazines, random plays on a few radio stations and even a podcast spotlight. While touring that year, we got the chance to play the glorious punk music festival Fest down in Florida, where we became instant friends with an amazing Sydney-based pop-punk band called Nerdlinger. After Fest, as our band and Nerdlinger remained in touch, the idea of From Parts Unknown taking a sojourn to Australia kept coming up (read: I kept pestering them about if they thought it was doable). After some months of back-and-forth collaborating, we got all the logistics in order and booked a run of shows Down Under. Unfortunately, Nerdlinger parted ways with its drummer and had to back out of the tour alongside us, but thankfully their friends in Black Heart Breakers were game to fill in.

Over the course of nine days, we played five shows in Australia. We hit Brisbane, Newcastle, Sydney, Melbourne and Canberra, and even recorded a live set at Sydney’s Def Wolf Studios, too. 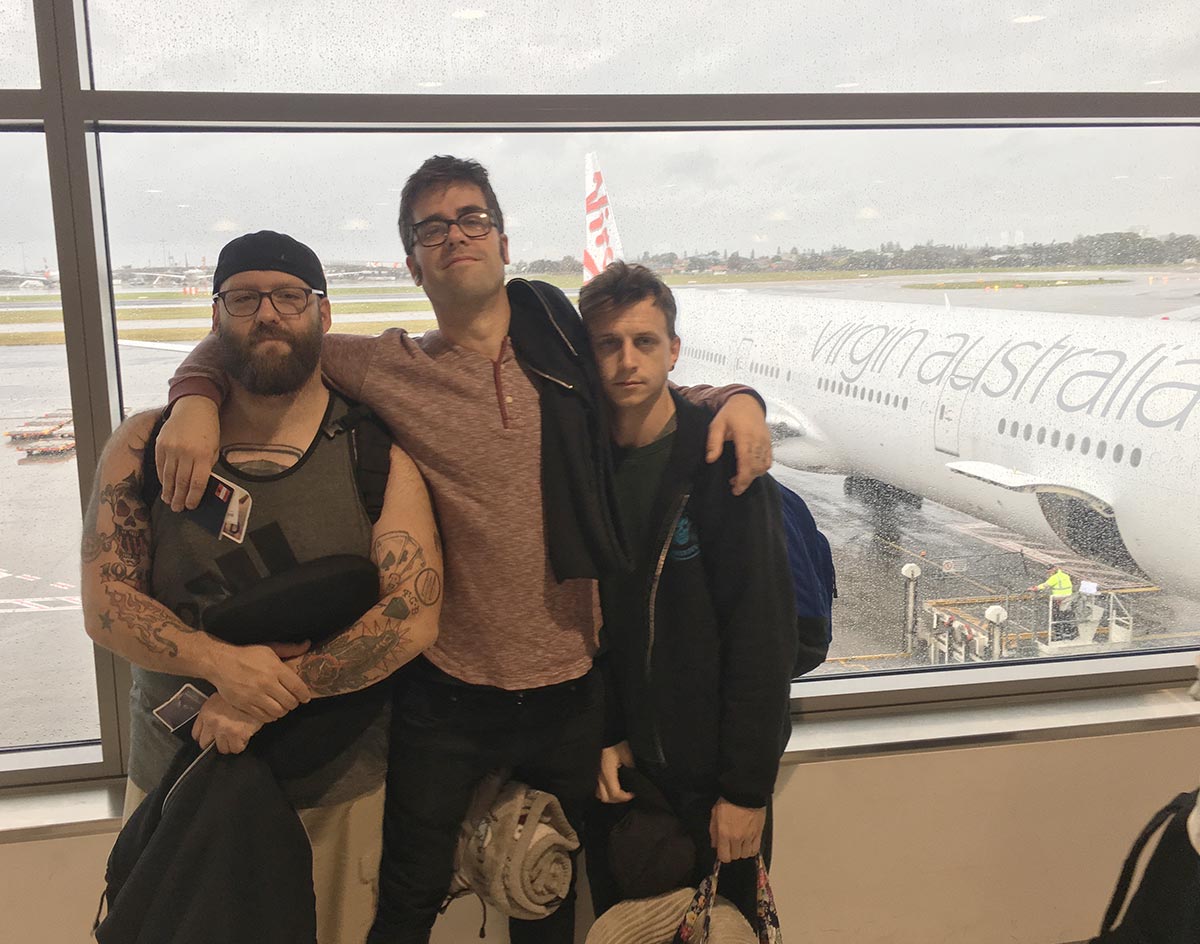 Just getting there was nuts. We left Dallas’ DFW International Airport on September 8 and arrived in Brisbane on the 10th after a run of three flights. Upon arriving in Australia, we had a day to finish setting up all that we needed to tour hard for the next six days before returning back to Dallas on the 17th.

Preparing for this tour was more involved than any other tour we have ever been on. The good news? We all had passports in line in advance of trying to get this run together. Acquiring our visas was pretty simple, too — just a quick online application. Still, there were other, unforeseen hurdles. For instance, I had to get a flight case for my guitar. Jimmy, on the other hand, just brought a cowbell and his signature sticks, and Chris brought his bass amp head. Most everything else, we borrowed from friendly Aussies, who were kindly up for helping us avoid some hefty rental fees — or, in Chris’s case, buying an extra plane ticket just for his giant-ass bass. We also lucked out in finding a cool Australian merch company that was willing to print us up some hoodies and T-shirts to sell at our gigs so we wouldn’t have to ship anything on that front.

Honestly, the flights were not as bad as we had expected. We got fed plenty, had plenty of TV shows and movies to binge on, and were able to drink basically as much alcohol as we wanted. (Fun flight hack tip: If you ask nicely for more food, most flight attendants will just give it to you, free of charge. Party!)

Two parts about this tour were easy, I’ll concede. First, we had a backline to use every night thanks to the Black Heartbreakers, which meant we could travel light from gig to gig and didn’t have to bring a drum kit — although we repaid them as best we could by going out of our way to try and help them load or unload their gear at each stop along the way. Secondly, we received incredible hospitality at every venue we played. That might seem small, but when you’ve grown accustomed to touring the States and being rewarded with two tickets you can exchange for a can of cheap beer or shot of well liquor at each show show, having an open tab tends to brighten every night — as well as blur it. 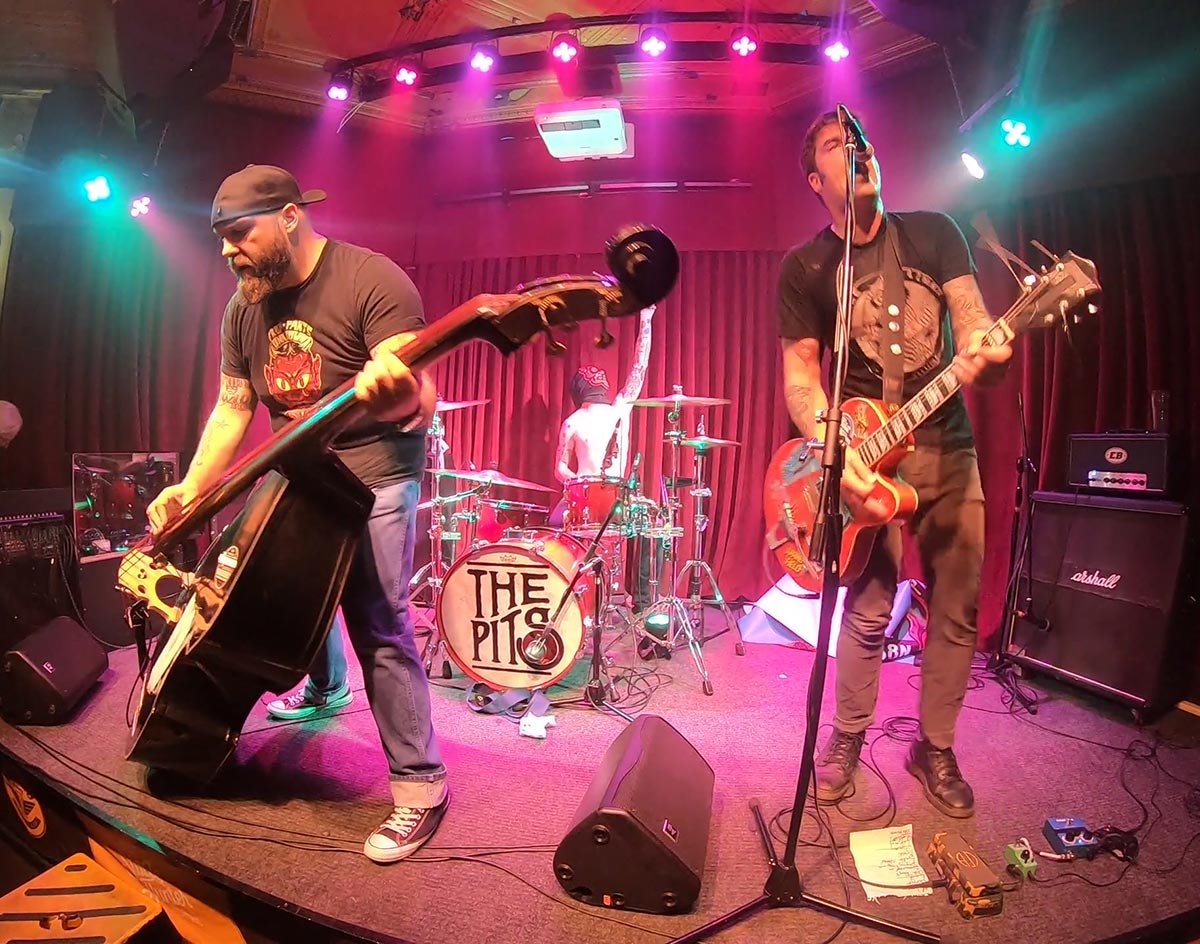 For the most part, though, this was a grueling tour. The early call times, the late hangs and the 6 a.m. drives that stretched through seemingly endless — albeit gorgeous — terrains for 10 hours a time pretty much kicked all of our collective asses. We’d been spoiled stateside with 7 p.m. load-in times, ample opportunities for after-partying and the option to sleep in until at least 11 a.m. the next morning. Let’s just say that the Australians we met on this trip are a tougher, and arguably more professional, breed than a lot of us back here in Texas.

Also? No one told us how gnarly the Australian speed traps are! We learned that fast. Within the first 15 minutes of my driving duties on this tour — on the left-hand side of the road, of course — a cop pulled me over in our rented van for speeding, and then gave me a breathalyzer test, even though it was only around 2 p.m. We learned our lesson, and suffered through the remaining of our 10-hour drives by cruising at a mighty 55 miles per hour — only, well, with whatever that worked out to be in the metric system.

Jokes made at our expense for not really grasping kilometers were just some of the ribbing we received in Australia. But, hey, that went both ways too. Over the course of the tour, we were confronted all kinds of stereotypes — some true, most false — about the Australian continent. 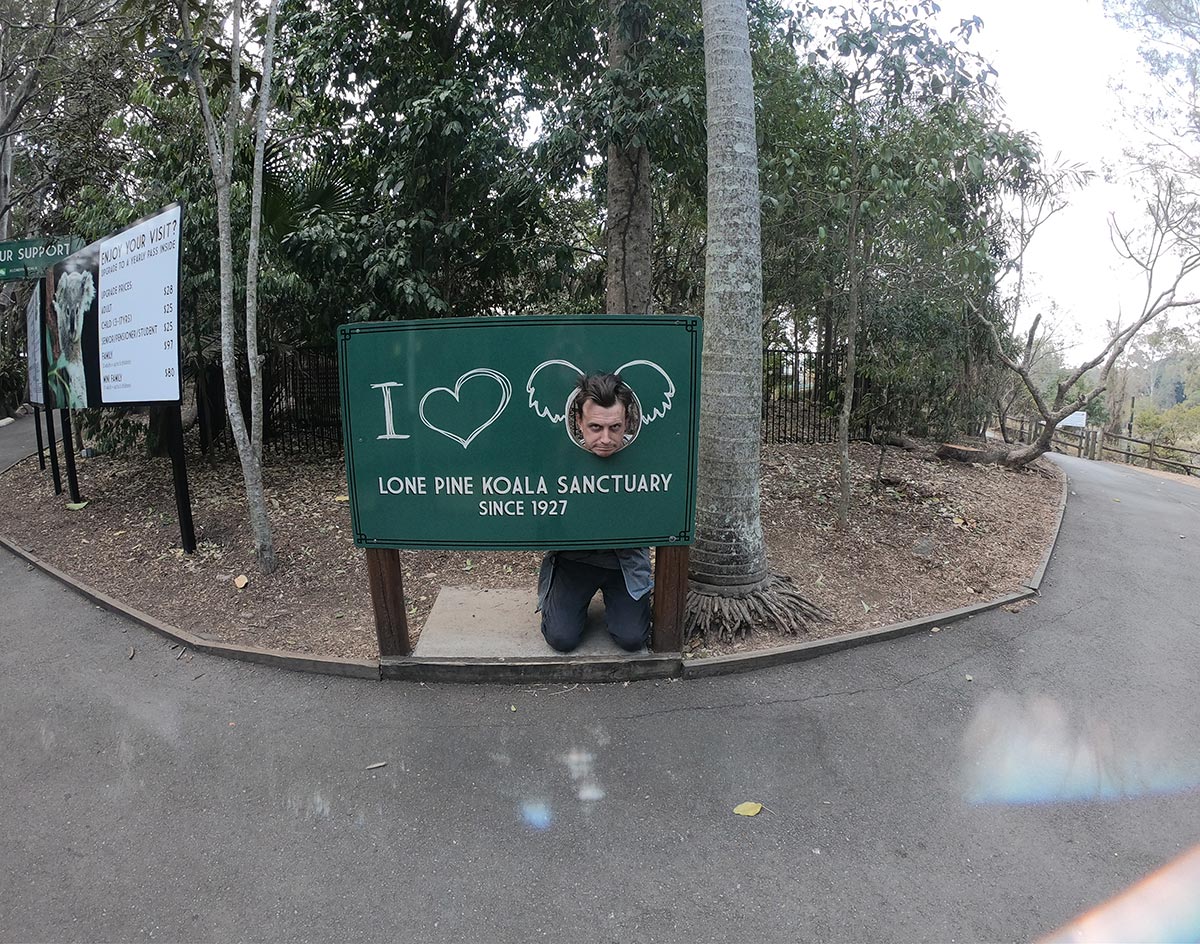 One grave withholding particularly shook us. It’s a crazy one, too: Highways all throughout Australia are just littered with kangaroo carcasses. It’s jarring to see — and just as head-spinning when you begin to notice kangaroo sausage rolls known as “Kanger Bangers” being sold at every “servo” on the side of the road. I don’t know why this hit us so hard — we sell venison and boar sausage everywhere in the United States! — but it threw us, for sure.

Worse was the drive into Australia’s music capital of Melbourne, where stretches of highways were just covered with dead kangaroos. It was haunting seeing all that carnage — like something out of a kangaroo-themed Robert Rodriguez movie. Apparently, freighter trucks are to blame for this — the drivers can’t see the buggers when they jump out onto the highways at night.

Australians, I should note, are a little less fazed by us about all this this. When I talked to some of our new friends about what we’d seen along the highways, we were told that this is all just part of Aussie life. (They did concede, however, that they might be shook to see a some roadkill squirrels in the States if they were to visit. Fun fact: Australians think squirrels are extra cute.)

For the most part, touring in Australia felt eerily similar to touring in North America. Australia looks like an exotic Canada, kinda. And Canada kinda looks like America (if we didn’t do drugs). A lot of the dregs of touring were basically the same: We’d gas up, drive, load in, wait, play, sweat, change, drink, load out, drive, drink more, sleep and repeat.

One cool thing was the pride Australians seemed to take in themselves, their food and their culture. The people we met along the way really out-shined all the cheap stereotypes. These people loved to laugh, enjoyed beer and were super helpful to an out-of-sorts band like ours. Their friendliness was pretty inspiring, frankly.

More breathtaking was all the awe-inspiring beauty we witnessed along the way. Even when our GPS crapped out and we got turned around, we still found ourselves marveling at how amazing all the scenery was. Like, it’s just a lot easier to swallow running behind schedule when the forest you find yourself lost in looks a bit like Jurassic Park or when the beaches you’re passing just happen to be some of the most stunning ones you’ve ever seen. We were able to enjoy Australian nature on purpose, of course — like when we went to a nature preserve and held koalas, pet some dingos, saw how tiny platypi are and laid on the ground with (live) kangaroos — but, throughout our drives, we saw seemingly every conceivable landscape, from sprawling deserts to fertile plains to jungle-like forests and teeming farmlands.

The cities we played too took our breath — they were glorious and modern and welcoming. Walking the streets of Brisbane, Melbourne and Sydney was just a great time, and enjoyable in large part because these moments were when we were able to dive into Australian cuisine. The food of Australia might not get a lot of hype, but it’s undeniably interesting, given its mix of English and various Asian influences. I was also surprised at the abundance of veggie and vegan options available pretty much everywhere we went — a welcome sight considering that I’m a vegetarian myself. 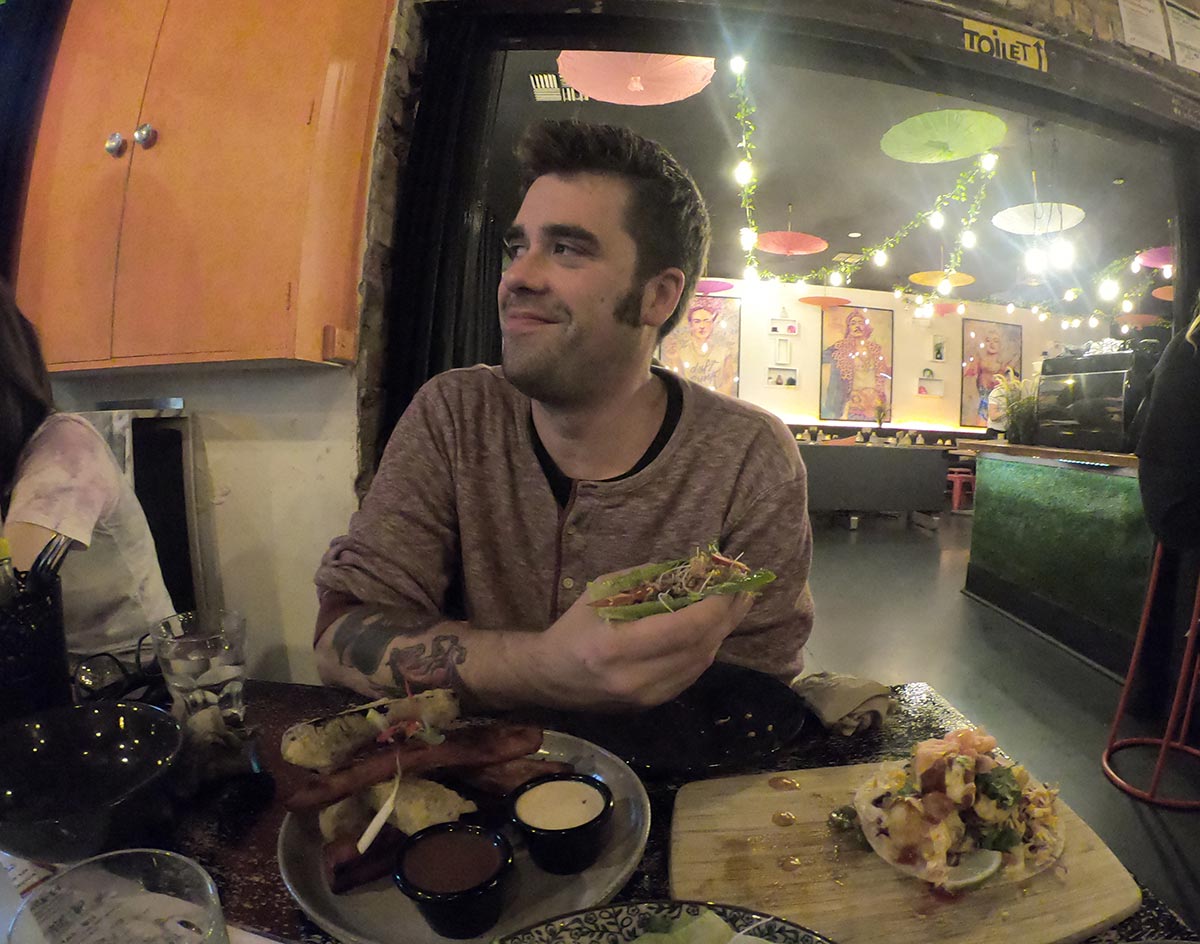 Less exciting were the taxes Australia seems to place on its booze and smokes. We spotted some packs of cigarettes going for upwards of $40 at some highway-side spots, and even the cheapest of beers mostly went for around $7 or more in the bars we drank in.

In all, touring the other side of the world was a crazy experience for our band. It was our first time playing another continent, let alone hemisphere. The week just flew by, and I’m honestly still assembling the pieces and memories. It was the wildest tour we’ve ever been on — and not necessarily for all of the reasons we dreamed or expected. We played packed shows, and were humbled by some sparse ones. We made some great friends, and were thrilled by surprise re-connections with some others. We walked away a more seasoned and hungry band — somehow a little wiser, but also a little dumber. 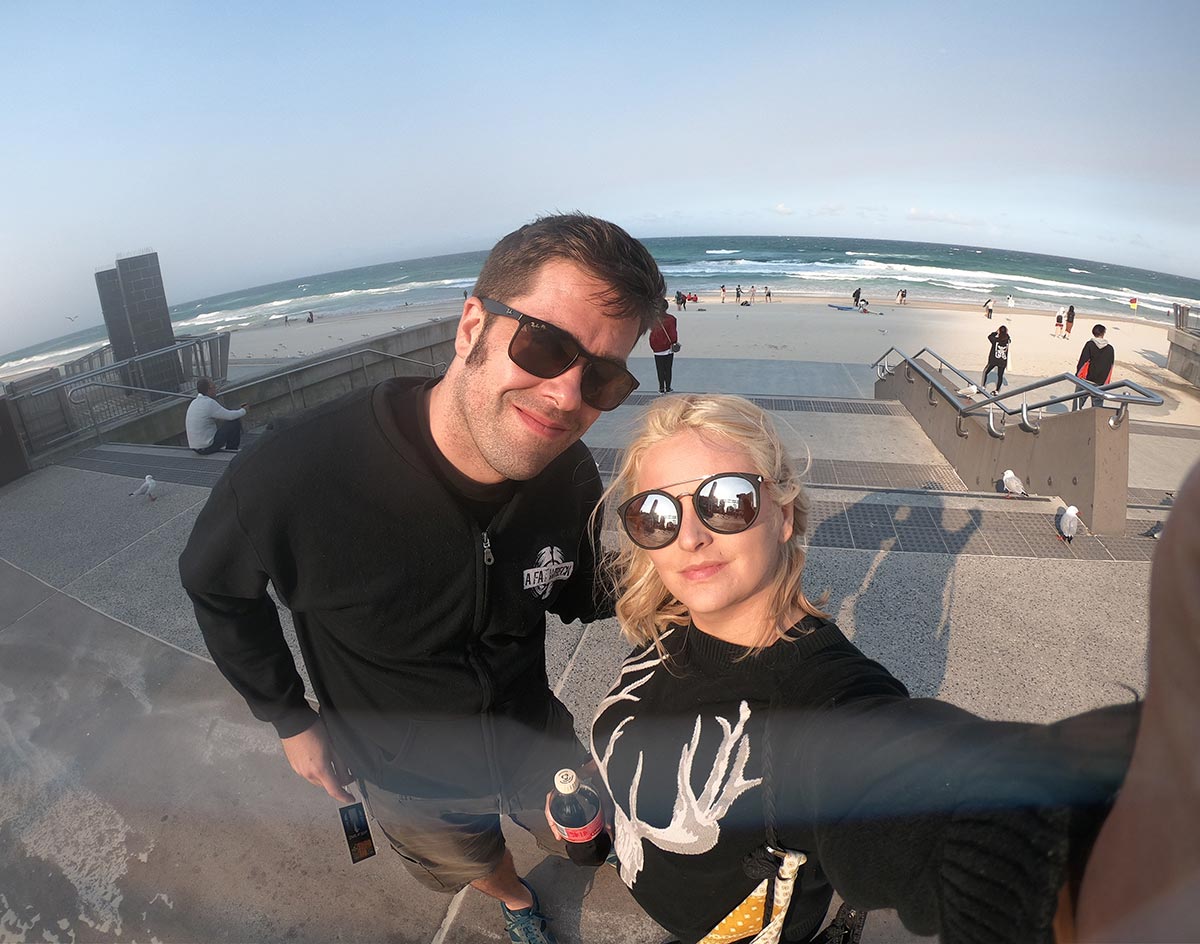 I think I can speak for the whole band when I say we flat-out fell in love with the biggest island in the world during our too-quick visit. Since returning home, I’ve been dreaming up ways for us to get back there — and to some other far-off lands as well. I don’t know just yet if or when another opportunity like the one we had in Australia will present itself to From Parts Unknown — but I know that we’re already itching for it.

And, next time, we’ll be even better prepared for it.

Or in other words, and as the Aussies might put it: We won’t be heading anywhere to just to fuck spiders.

All photos courtesy of From Parts Unknown.