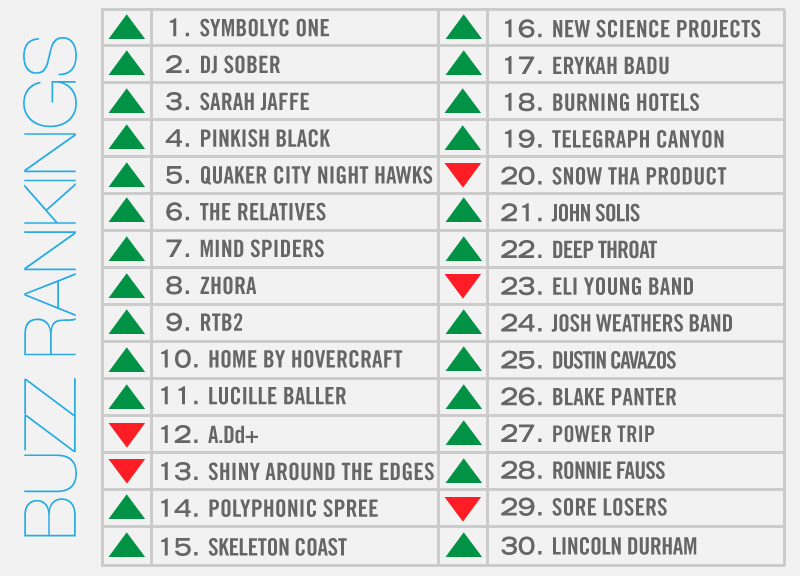 This Week SymbolycOne Beats Out The Competition.

Ever since Kanye West used a Symbolyc One-produced beat for as the basis for his multi-platinum, Grammy-winning single “Power” in 2010, S1's been something of a go-to guy whenever a platinum-selling hip-hop artists needs a new beat. As such, in recent years, the Cannabinoid lynchpin has crafted tracks for Jay-Z, Beyonce, Rhymefest, Erykah Badu and Ghostface Killah to name a few.

And his success has only continued of late. Earlier this week, 50 Cent unveiled his latest S1-produced single, “My Life,” with a performance on NBC's The Voice along with Maroon 5's Adam Levine, who appears as a judge on that show and as the singer of the new track's hook. Though absent from the television debut, Eminem also appears on the track as well.

Given the amount of buzz this star-studded affair has received thus far, it's no surprise at all that Symbolyc One is the most buzzing act in town this week.

Not far on his heels, though, was DJ Sober, who will be spinning at our upcoming Hometown Glory event at Dada next weekend. As a sort of build up to that event, Sober released his exclusive year-end mix on our site a few days ago. Digital copies are currently available via Sober's Soundcloud page, but he's also mentioned that hard copies will be available next weekend at Dada as well. Fellow list-makers Zhora will be performing on that bill as well.

It was a big week for other perennial local heavy hitters as well. The Polyphonic Spree and Sarah Jaffe each announced national television performances in the coming weeks. The Spree will play The Tonight Show With Jay Leno on December 3rd. Jaffe, meanwhile, will be making her national television debut when she plays the Jimmy Kimmel Live on December 11. Jaffe also recently announced a New Year's Eve show at The Kessler.

Meanwhile, when the 35 Denton team announced their second batch of confirms for next year's festival, Silver Apples and Thurson Moore's new Chelsea Light Moving outfit received most of the attention. But not to be overlooked were local punk heroes Mind Spiders, who also found themselves among the early batch of announced acts, and one of the few locals announced thus far.

Gospel group The Relatives also had a pretty big announcement of their own this week: After performing together for 40 years they are finally releasing a debut disc next February produced by Jim Eno of Spoon.

Another big newsmaker this week included Lucille Baller, the DPD officer who was let go after the department learned she had been moonlighting as a gangster rapper.

The story has since hit the Huffington Post and several other national outlets.