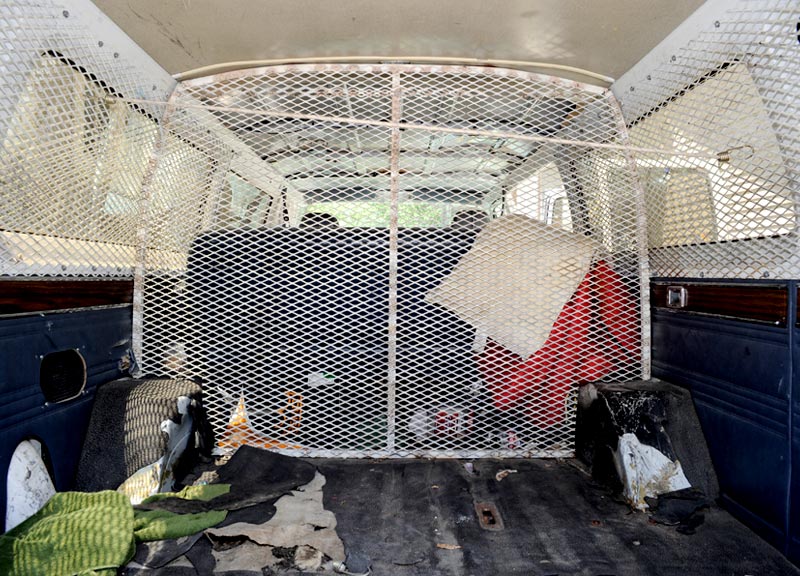 Big Fiction's Prison Van Has Got This Shit On Lock.

On paper, Big Fiction is every bit the stereotypically scary metal band your mother was afraid you'd run into in a dark alley one night.

The band's members — all long-haired and tattoo-covered — indeed create some of the noisiest riffs in town. And they've all also spent copious amounts of time in the backseat of a prison van.

Fortunately for vocalist Jesse Jones, guitarist Brooks Willhoite, bassist Ricky Williford, and drummer PJ Costigan, though, every time they've been in locked in the back of a paddy wagon, it's been with one of their fellow bandmates at the wheel.

In this week's Bandwagon profile, Big Fiction gives us the lowdown on the quirks and pitfalls that come with touring in a vehicle that was once used to transport prisoners.

While their ride — which has been immortalized in song as well as on the cover of the band's most recent album — makes an extremely secure spot to store thousands of dollars worth of gear while on the road, it's not necessarily the most accommodating vehicle to be in when one (or all) of your bandmates gets sick.

Where did your van come from? How did you acquire it?
Ricky (bass): “Craigslist. We met this crazy redneck guy in the middle of Wolf City, Texas.”
Brooks (guitar): “It was creepy.”
Ricky: “When we got there, the guy is showing us the van in the middle of his yard, right next to a tree. In so many words, he said he bought the van at an auction, he'd changed a couple things on it, and we could take it for a test ride. When we first got it, though, there was a metal cage behind the front seat, a metal cage behind the back seat, and another seat in the very back. Jesse, Brooks and I got in the van to test drive it. I'm the most mechanically-inclined, so I drove it to see what it feels like. The [creepy redneck guy] gets in the front seat with me, basically trapping Jesse and Brooks in the back seat. So if I get killed, these guys are primed for getting raped and tortured. Y'all were trapped. There's no knobs on the inside. It's a prison van; they took all the knobs out of the inside, so when you're in you're pretty much trapped.”

Brooks: “At that point we're thinking 'Aw, we're idiots. Craigslist killer!'”
Ricky: “So then we did the smartest thing we could have done: We started talking about Pantera. He was like, 'Aw, man! You guys like Pantera? You from that town, man? That's pretty badass, man! How much you talkin' 'bout gettin' rid of this van?'”
Brooks: “First, he told us that he'd just seen Pantera the other day.”
Ricky: “We were like, 'Yeah, that's probably not true.' Maybe it was cover band with a really good Dimebag lookalike. But that ended up working in our favor. Not only did he not rape and kill us, he gave us the van for $750.”
Brooks: “As soon as we got it back, we decided, 'Why try playing some shows in town? Let's go straight to Odessa.' That was the first show with it a week later.”

Are the cages both your band's best and worst feature?
Ricky: “I'm going to say they're the best. There are many other things that qualify as the worst. There's no AC, the radio cuts out whenever it wants to, the rearview mirror hasn't been attached for quite awhile. Probably my favorite feature of the van is the sticker at the front that says “Do not talk to driver.” So when someone's annoyed and they're driving, they can just tap the sign. In all truthfulness, probably the best feature is how fucking huge this van is. The last tour we went on was Spacebeach and Big Fiction, and we all slept in the van at one point.”
Brooks: “At one point, it was us and Canyons. They have four members and we have four members, so there were eight people in the van comfortably.”

Who usually does the driving?
Ricky: “I'd say Brooks has done the most driving. Jesse we let drive sometimes, but everyone gets scared after he drives. I'm too lazy to drive, so I'll come up with an excuse every time. On tours, it's almost always Brooks driving. There's an added amount of responsibility and stress to that that he normally welcomes.”
Brooks: “I don't really care because it means I don't have to talk to anybody. I can tap the sign whenever I want.”
Ricky: “There's a funny story about the only time PJ ever drove the van on his own.”

Jesse (vocals/guitar): “In Houston, we're just hanging out at the venue — Walter's — outside, and they were cooking out. We ate some jalapenos wrapped in bacon. Probably about ten minutes after, Ricky said he wasn't feeling good after eating that. I looked at him and said, 'Yeah, that shit fucked you up man.' In about an hour, he barfed. Then Jess started puking about 20 minutes later, and it was all downhill. These two were laying down in the green room.”
Ricky: “It had its own bathroom and shower, which was super convenient.”
Jesse: “They would lay there motionless. Then they'd try to drink some water and immediately throw it back up.”
Brooks: “We were swapping who would have diarrhea or be puking in the toilet and then the other would go in.”
Ricky: “Not to get too graphic here, but it was to a degree where I'd drink water and then run to the bathroom and shit cold water.”
Brooks: “We had a guarantee, though, so we had to play. We were not about to lose that money.”

Jesse: “At first Ricky was like, 'I'll go out there onstage.' This was probably when they were at their worst. It was just me, PJ and Ricky at first. Brooks was puking. Then Brooks comes out for a couple of songs.”
Brooks: “I sat Indian-style on the stage.”
Ricky: “On the third song, I had to drop my bass and run to the bathroom. I puked in a urinal.”
Jesse: “So we're done. About an hour later, I'm packing up most of our gear while these guys are just laying down, and I'm like, 'Now I don't feel so good. What do we do? Should we go home?' Then we said, 'Fuck it.' I'm packing things in the van and I start feeling queasy. My girlfriend was with us, and she was feeling queasy. No one is feeling good except for PJ. At one point while we're driving, my girlfriend rolls down the window and pukes.”
Ricky: “These are the windows on the side. They pivot out about an inch from the door. You get to puke out of this little hole.”
Jesse: “On the other side, Ricky threw up and it sprayed back in the van.”
Brooks: “I was in the back and it sprayed back on me. I had this blanket and, every time I'd hear somebody, I'd have to cover myself up.”
Jesse: “An hour-and-a-half outside of Houston we stopped at a gas station and I just opened the door and puked immediately.”
Brooks: “All four of us were puking by the van at that gas station.”

Jesse: “I looked at PJ and was like, 'You gotta drive.' PJ has never driven the van.”
Brooks: “Then the transmission started going out on the way home.”
Ricky: “PJ never eats when we eat. He normally eats something from 7-Eleven instead, which you'd think wouldn't work well in his favor, but in this case left him being the only one healthy enough to drive us back.”

Do you have any good breakdown stories?
Ricky: “In Philly, on the highway, all the belts just snapped at once. We waited an hour, it cooled off, and we made it to about a block from the hotel before it really started heating up again. We took a cab to get the parts to fix it the next morning. In Ohio, our water pump went out in almost the same area that Dimebag was killed. We felt like it was a curse.”
Brooks: “We were on the Ohio Turnpike and it just blew up. We'd drive for 20 minutes then have to stop and let it cool down, then drive for 20 minutes and stop.”

What are the best modifications you've made to the van, decorative or otherwise?
Ricky: “We made some adjustments to it right before our first tour. We took out one of the metal cages so now it just has one that separates the equipment from the passenger area.”
Brooks: “Then we put this fancy lock on, but we're not smart enough to realize that we had actually locked the door beforehand, so we locked ourselves out of the back of the van the night before tour.”
Ricky: “We put the padlock over the keyhole. We locked it by accident before we installed it and then we couldn't unlock it because there was no way to. And we couldn't get on the inside because of the steel cage. We used a crowbar to rip the handle off, tore a big enough hole that I could get in with a drill, and just drilled out the door lock mechanism until it completely fell into pieces and we were able to open the door.”
Ricky: “That was at like midnight before we left at like 8 a.m. the next morning.”

Brooks: “You start to appreciate every comfort you come across, like every band we'll do a few days with on the road that has AC in their van and stuff like that. We'll come to a house with a fan and all just sit in front of it. The seat that the driver has to sit in has all the boning coming out so you're just sitting on metal wires. If you get out at a gas station in the sun, they're hot as shit when you get back in.”
Ricky: “The floorboards get really hot if you're driving for more than an hour. Everybody's feet are up.”

Anything else we you'd like to tell us about your van?
Brooks: “In Baltimore, we had crackheads look in on us. PJ had to pull out his [Airsoft pistol, because it looked like a real gun]. He was just laying there showing them his gun, going, 'I got you.'”

Big Fiction performs Saturday, May 11, at Dave's House in Denton 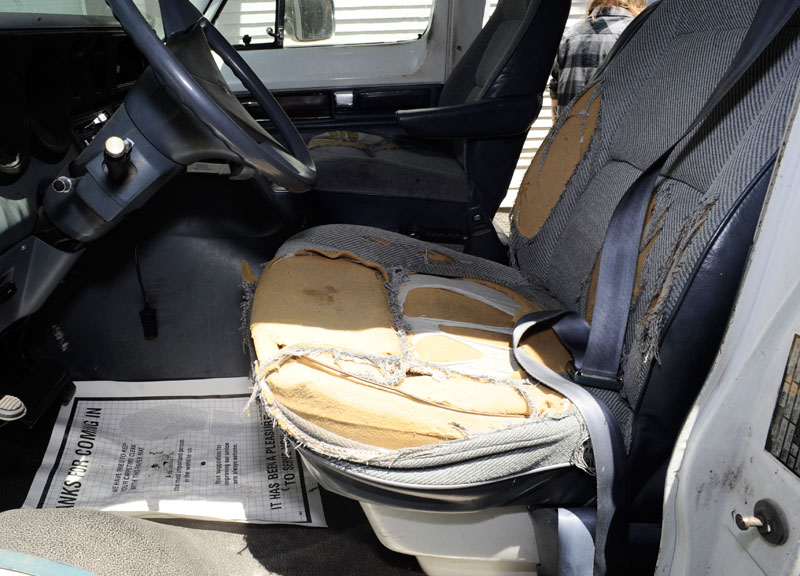 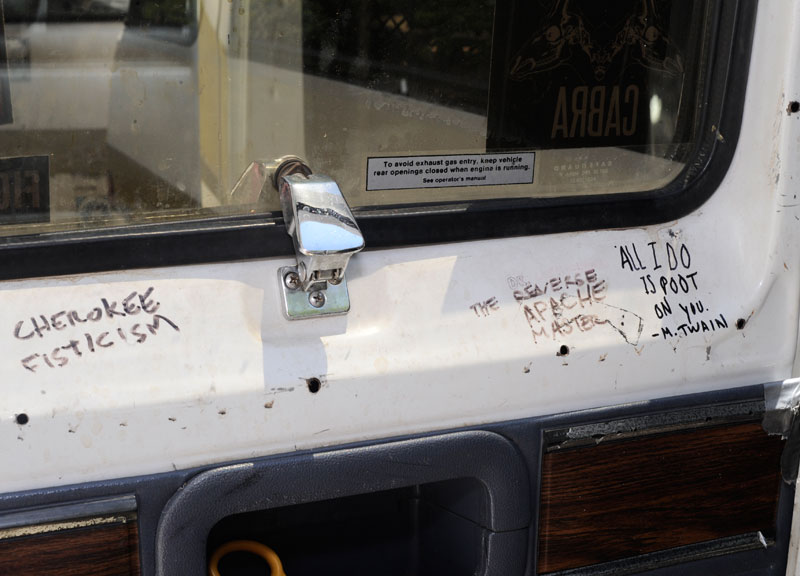 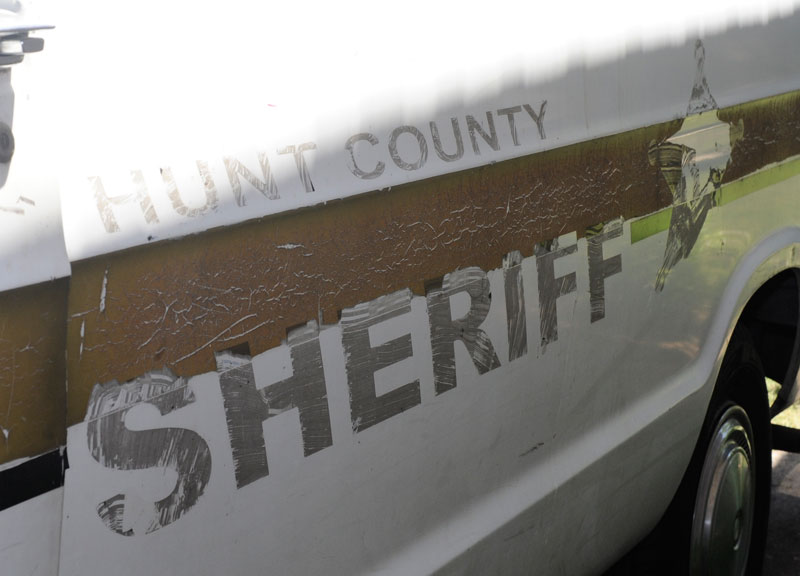 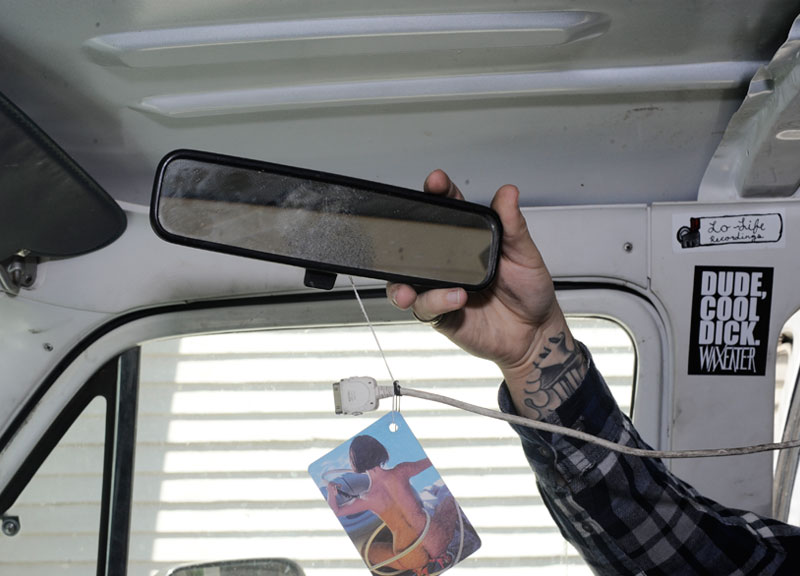 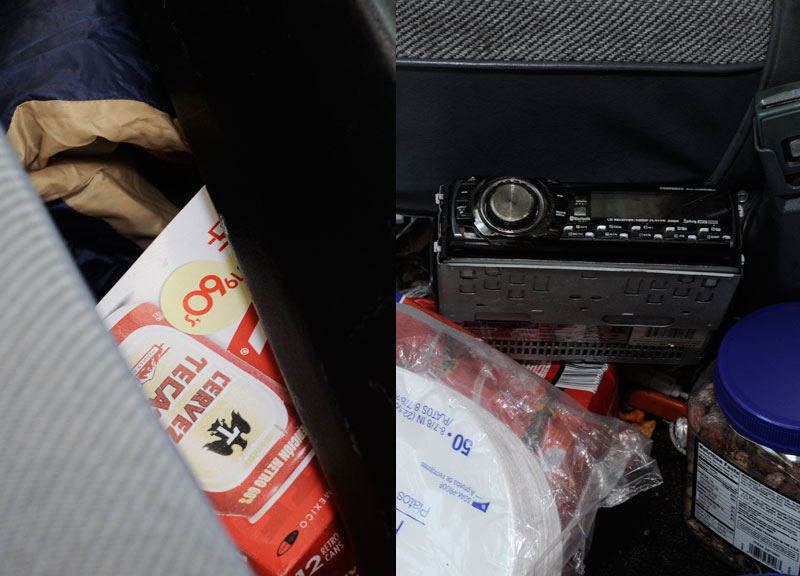 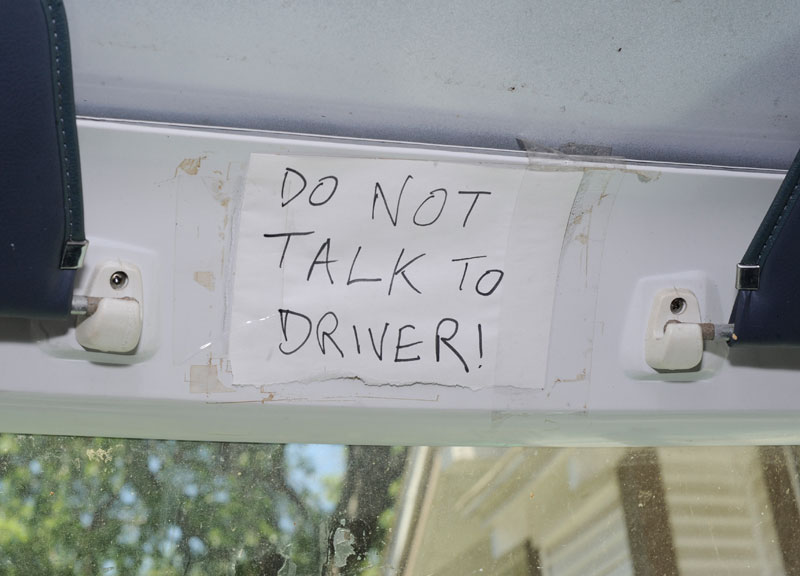 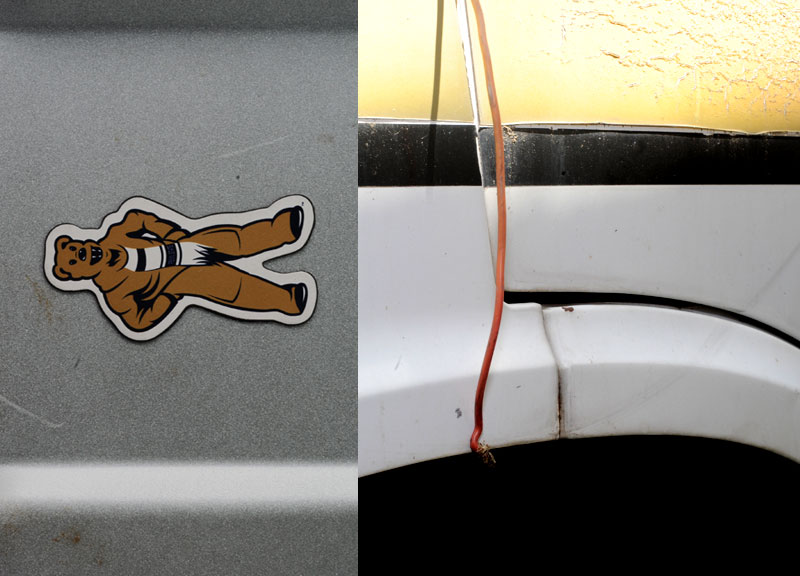 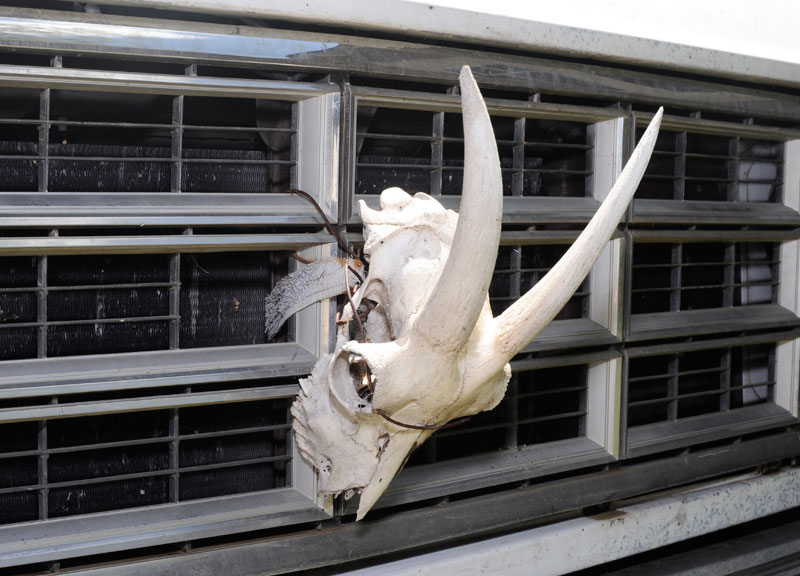 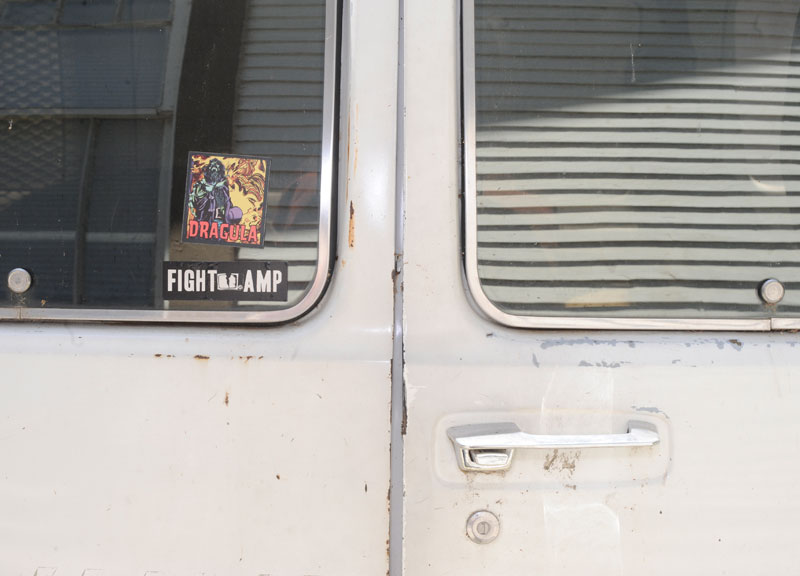 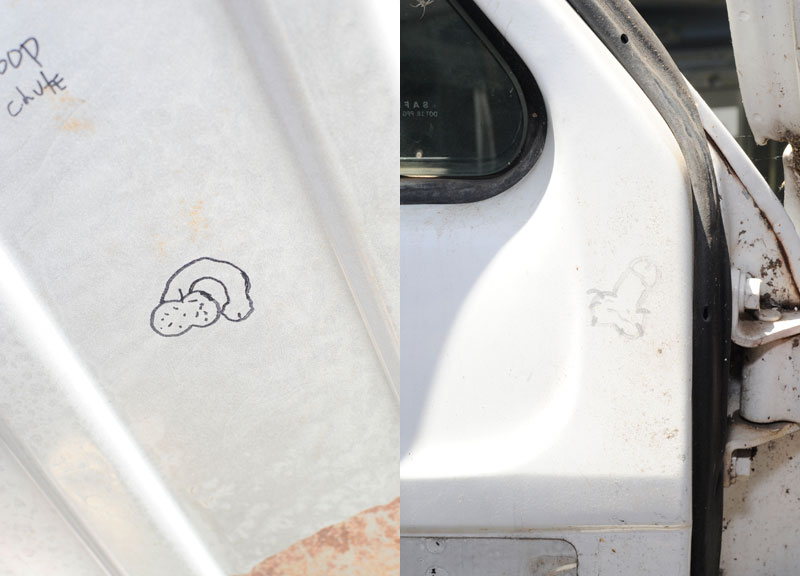 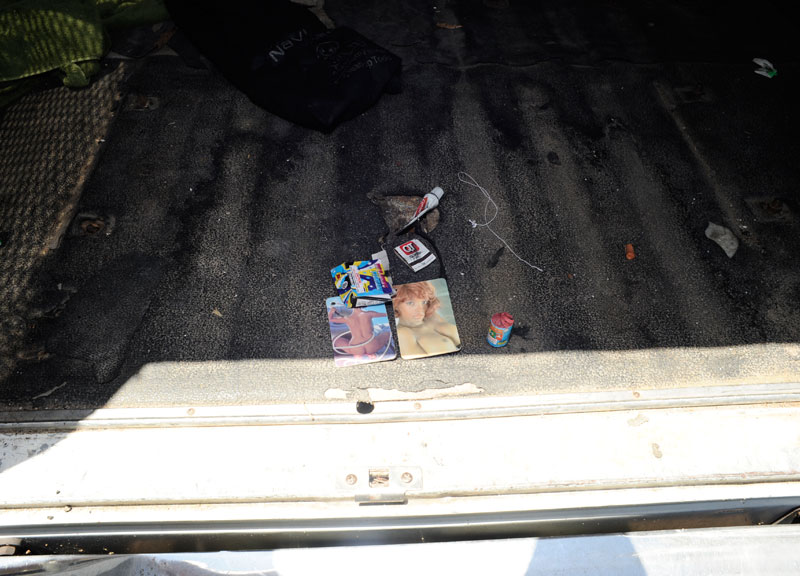 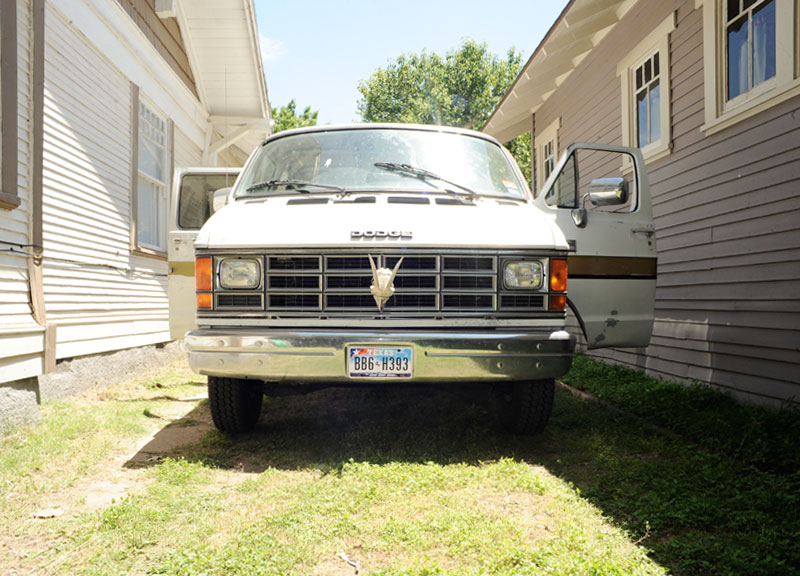 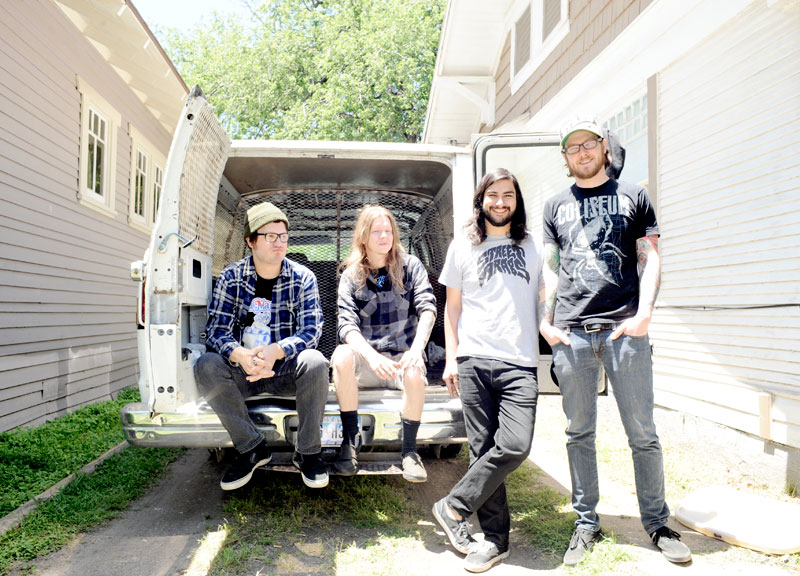