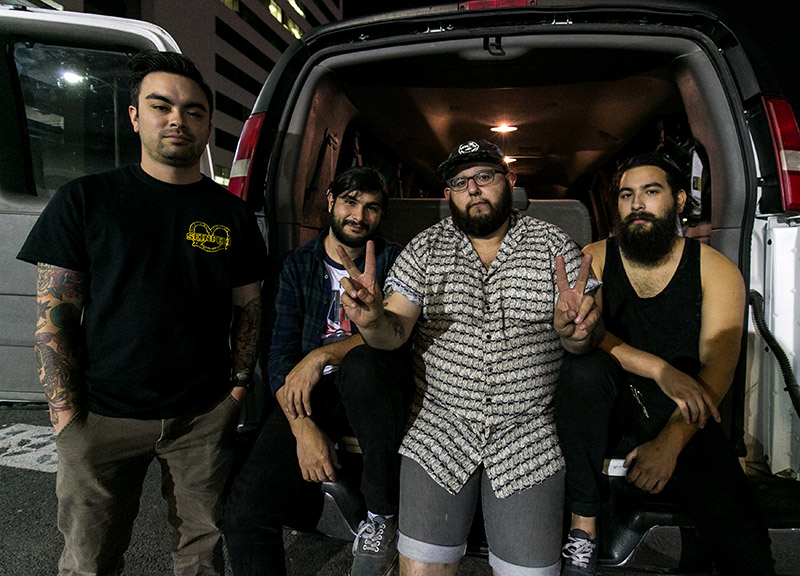 Bummer Vacation's Van Might End Up As Your Next Uber Ride.

As a band, Bummer Vacation is still very much the new kid on the block, even if its members are anything but. Each member has performed in local bands before joining this one — and recognizable ones, too, including Sealion, Skeleton Coast and War Party. So, no, it's not at all surprising that, less than a year after the band's assembly, it has garnered a fair amount of traction in the local scene and released a praise-worthy debut in Creative Differences.

But while the praise is easy to attribute, pinning down the band's sound is a much tougher task. A post-punk element is there in tone, sure. But the album is supremely melodic, too. Really, Creative Differences is a fantastic balance of dream pop and punk — and one well worth the tours the band's already embarked upon in support of it.

So, just before the band's show last week at City Tavern, we caught up with its members to talked about their band's young tour life so far, as well as how best to deal with crust punks and road rage.

Tell me about the van's name.
Paul Hernandez (vocals/guitar): It's two different names cause we split this van with War Party. When they have it, it's Vaniel Day Lewis. When we have it, it's Vanuel De Louise.

Where did Vanuel De Louise come from?
Ryan Torres-Reyes (vocals/guitar): We got it from the Hannah Barbarians. They passed it on to us.

What makes this van special?
Paul: The air conditioner actually gets cold.
Ricky: It gets too cold!
Tyler Moore (bass): The suspension isn't awful.
Ricky Williford (drums): It's the first time I've ever experienced a van being too cold.
Tyler: Our band tech's hair actually freezes because it has so much pomade in it.

What's the worst thing about this van?
Paul: The A/C!
Tyler: It's too big. There's so much room!
Ryan: It's too comfortable, it's too big, it's too fantastic.
Tyler: It's just too good.
Ryan: No, the worst thing is that, when we pull up to a venue and we're playing with a bunch of crust punks, they think lowly of us.
Paul: Oh, yeah. They don't like us.
Ricky: They're like, “Oh, these dudes have money! Obviously, their parents bought them this van.”
Ryan: Until we play. Then they're like, “OK, OK. They're legit.”

What do crust punks travel in?
Ryan: Same thing we have, but older.
Paul: Conversion vans.
Ricky: Old Dodges with the single door that opens way wide.

Who usually does the driving?
Paul: All of us. We're all pretty good.
Tyler: We're all road dogs.
Paul: Tyler's probably best. I think I'm second. [Ryan and Rick] are third.

Is there anybody who shouldn't be driving?
Paul: Chris Waldon.
Ryan: Chris Waldon from War Party.
Tyler: He drives the van like it's a Volkswagen Jetta.
Paul: He's drives it like he’s a NASCAR pace car.

Anyone here get road rage?
Paul: We split that up so well! You heard us on the way here: I'm cussing out a guy in a Lexus because he thinks he has priority of the road.
Ricky: We're all shitheads.

What are some of your best memories in the van?
Ricky: Everywhere we've gone in this van has been an awesome experience, to be honest.
Tyler: The windows are really big, so if it's really late at night in the middle of nowhere, you can see perfectly. It's got good visibility. So, thank you,

Thanks for the Dad answer there.
Paul: [Laughs.] Well, the seatbelts are fantastic.
Ryan: The air bags are well-placed.
Tyler: The cruise control is wonderful.
Ryan: It has a five-star crash-test rating.
Ricky: No, but the digital read outs are awesome. It tells us “everything.”

What are some modifications you've made to the van?
Band: Taking the backseat out.
Paul: Using cups to piss in.

Oh, separate bathrooms. Fancy!
Paul: Or, actually, it's not even a modification, but Ricky has a power strip that plugs into the cigarette lighter plug. Everyone looks at that and they're like, “Oh shit! You could put a TV in here!”

Then the alternator goes out half way to Phoenix.
Paul: I just had The Outfit, TX in here and they were like, “What the hell?!”

Oh, awesome. We love The Outfit.
Paul: Sometimes, we'll rent the van out or I'll go drive for someone.
Ricky: Paul’s truck died right before we got this van, so the timing worked out really good for him to have a vehicle to travel in as well as be able to do some of that cool stuff on the side.

You can do acoustic sets in the back.
Paul: We can! Yeah! Offer music with the Uber session!
Ryan: [Laughs.] Uber sessions!
Whole Band In Unison: UBER SESSIONS!
Paul: We'll go to Uncle Uber's and grab sandwiches, too. Patent pending. Patent pending!

Anything else you’d like to tell us about the van?
Tyler: It's got a special place in all our hearts.
Ryan: It really does.
Paul: We're all pretty fortunate and happy to have this van. We gave up our practice space to be able to afford this van. We work hard to be able to have this van. We're just really glad that it's a nice new van.
Ricky: When something fucks up on it, we all take concern.
Tyler: We're all learning together. 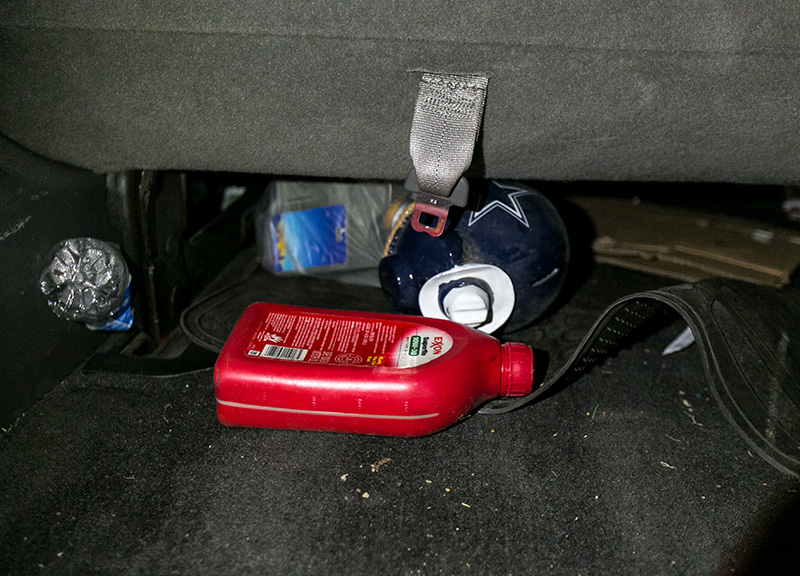 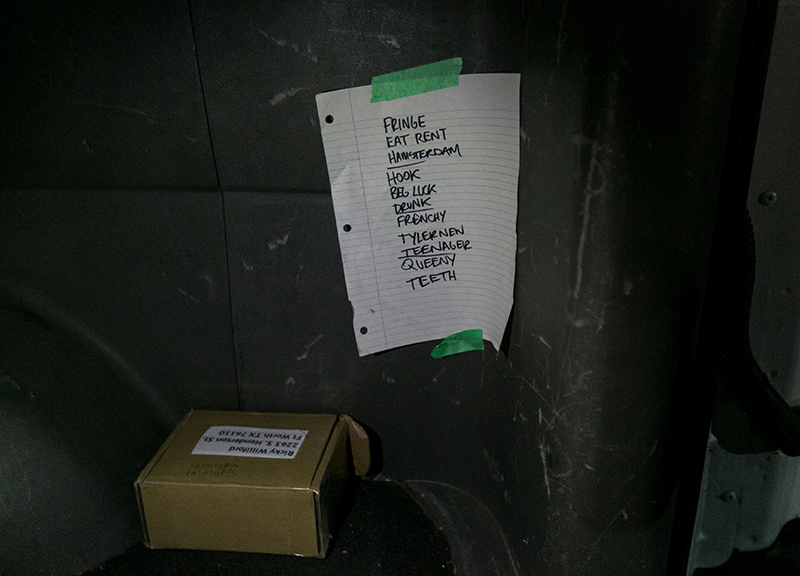 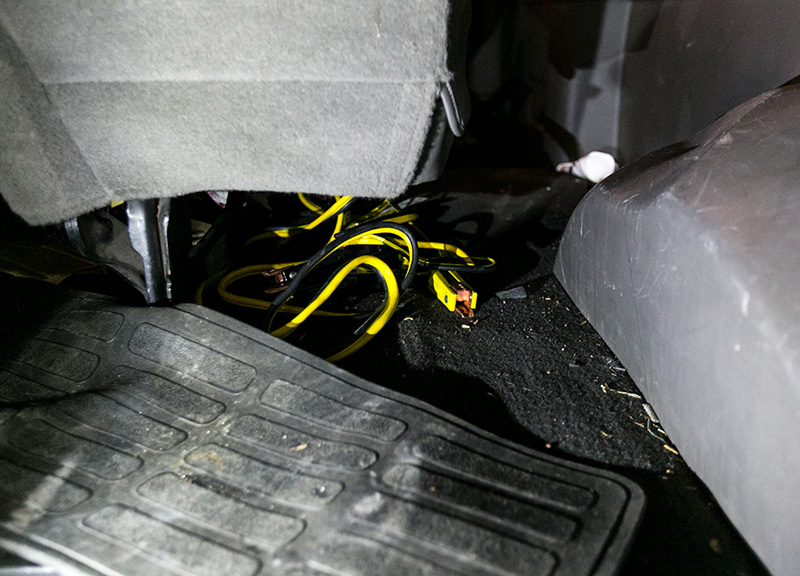 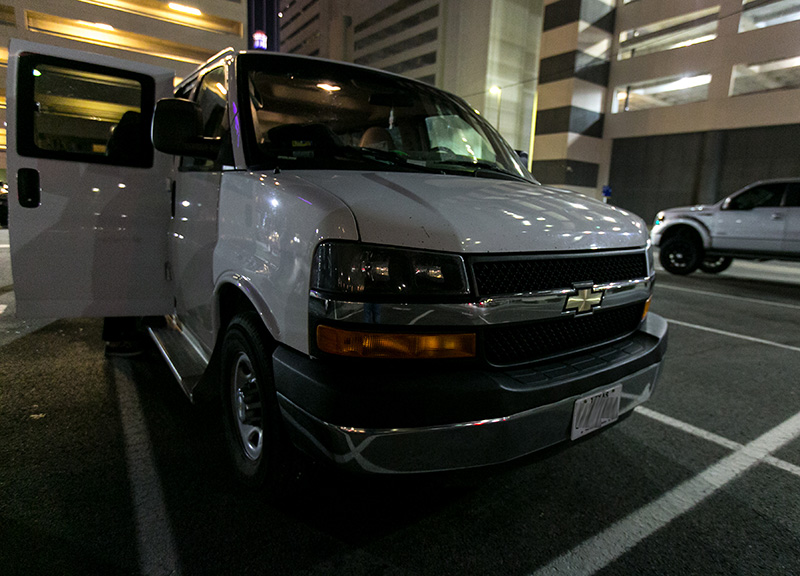 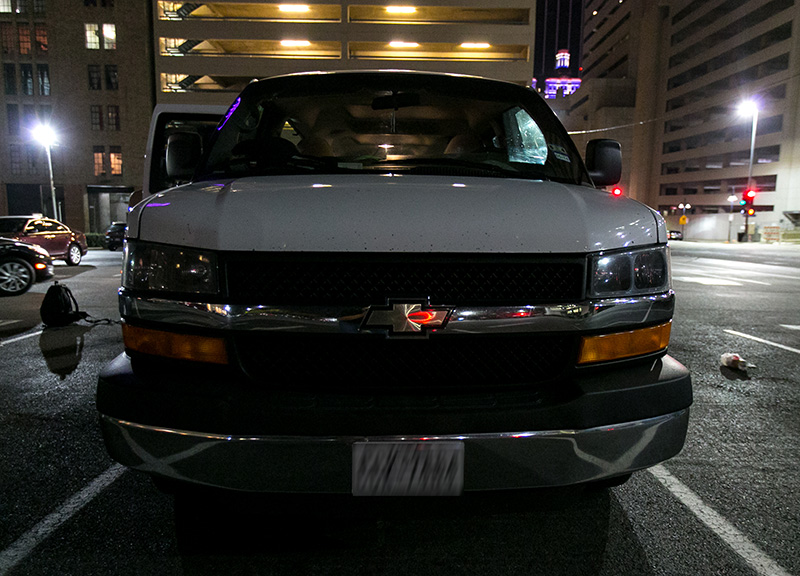 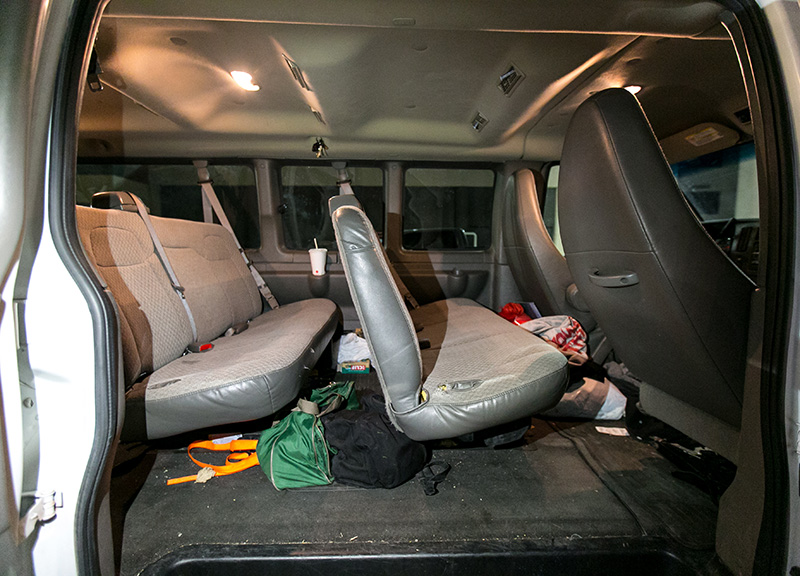 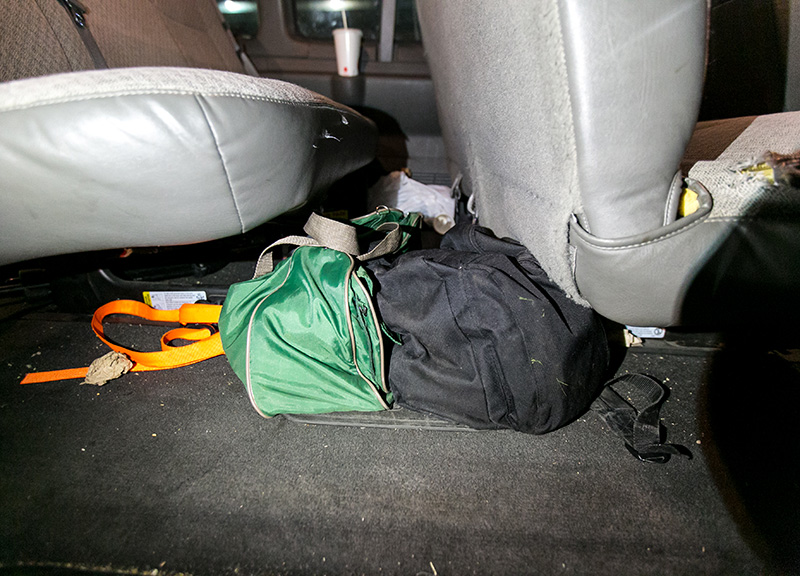 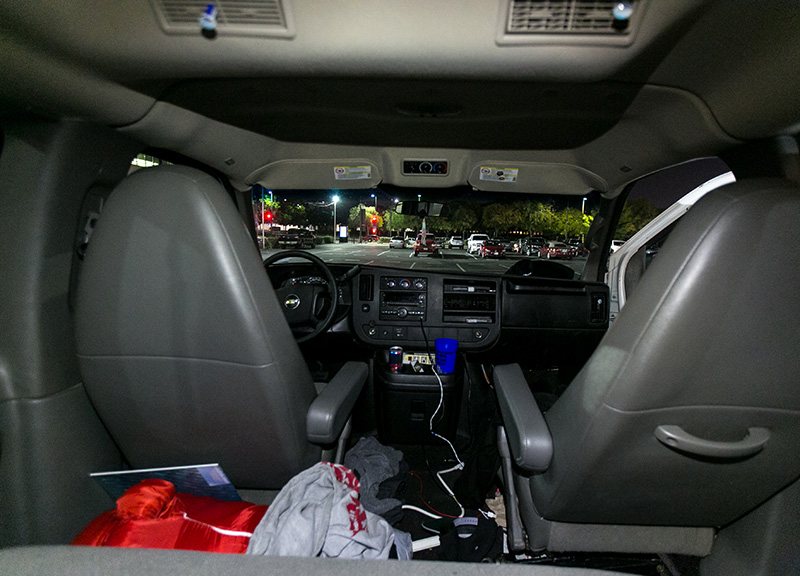 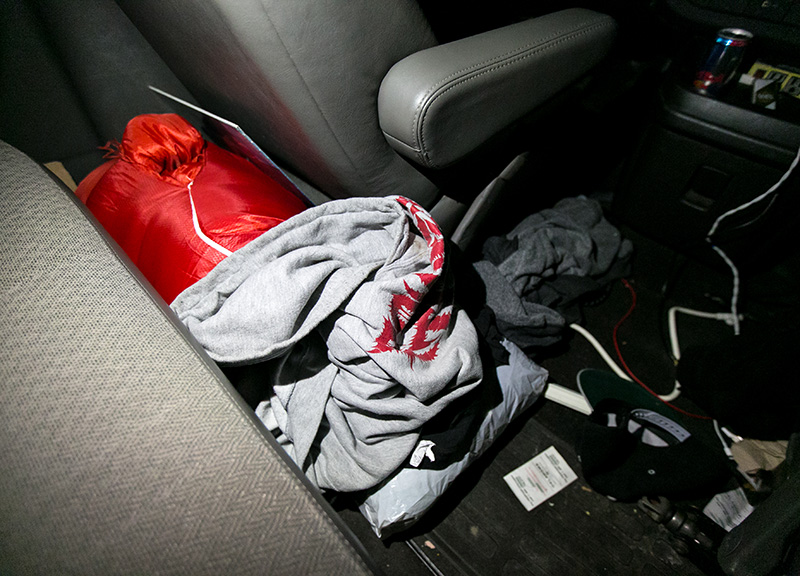 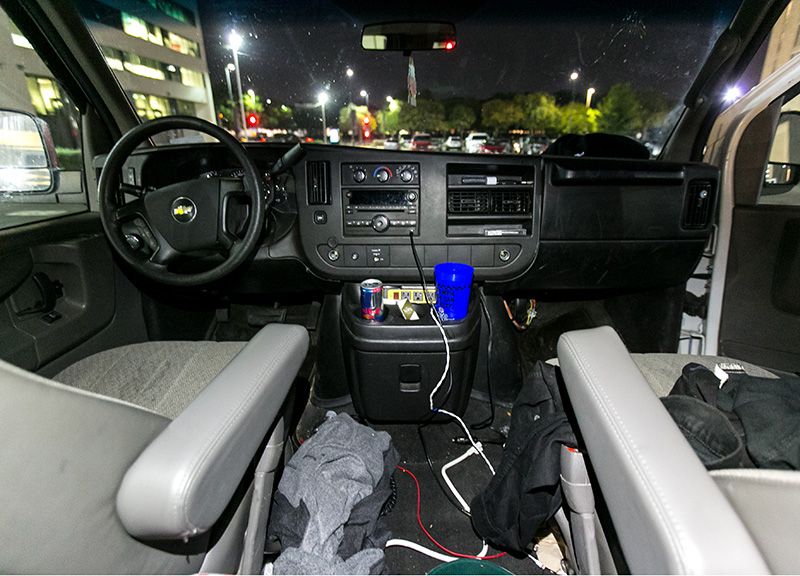 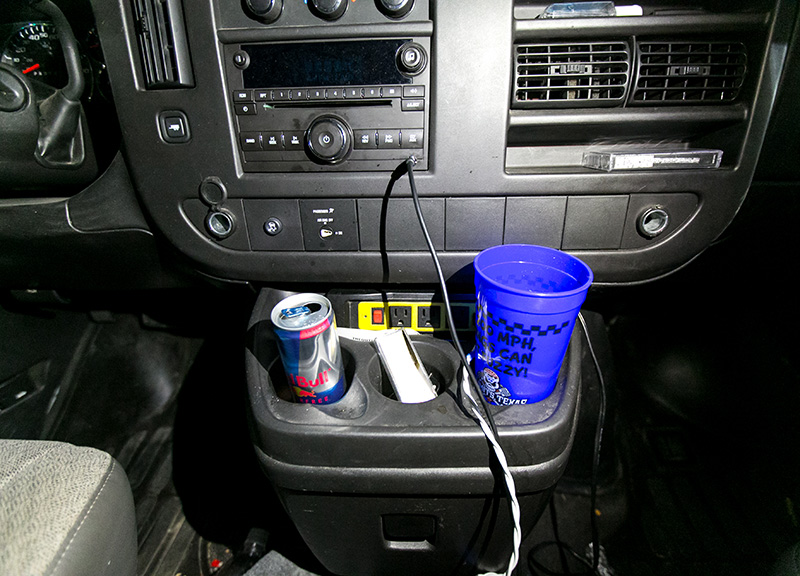 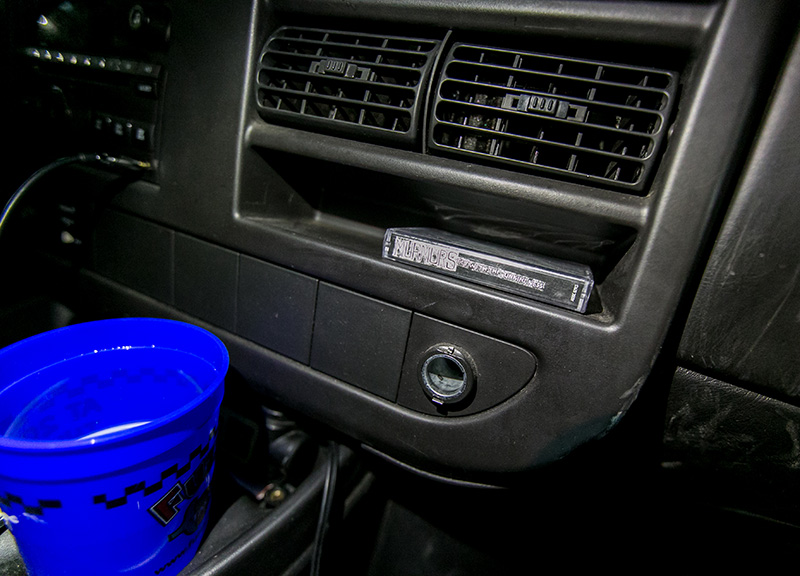 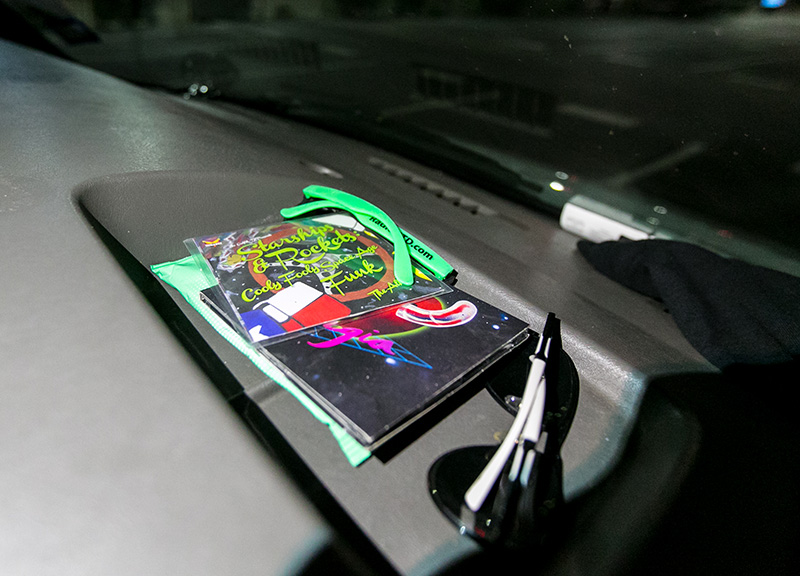 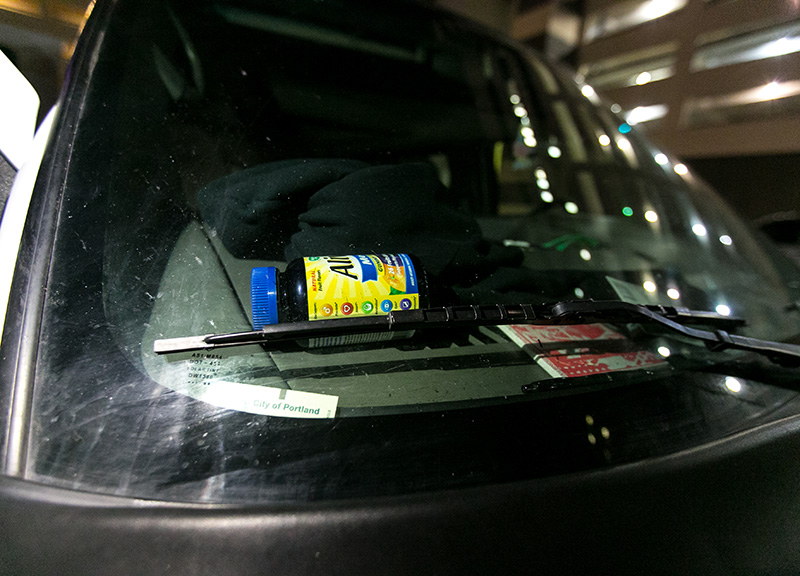 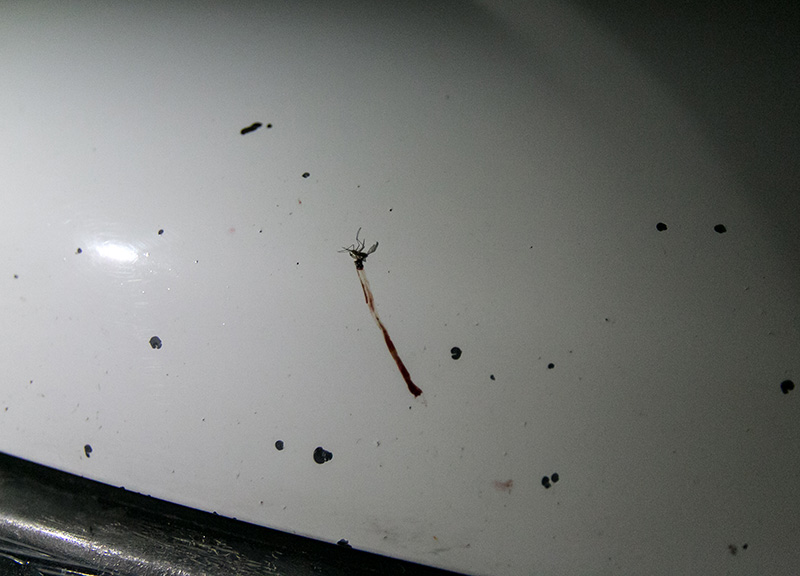 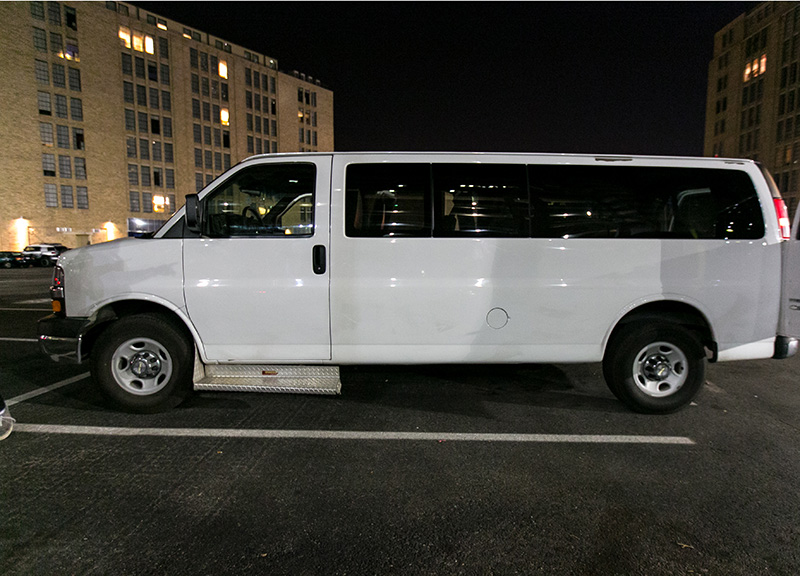