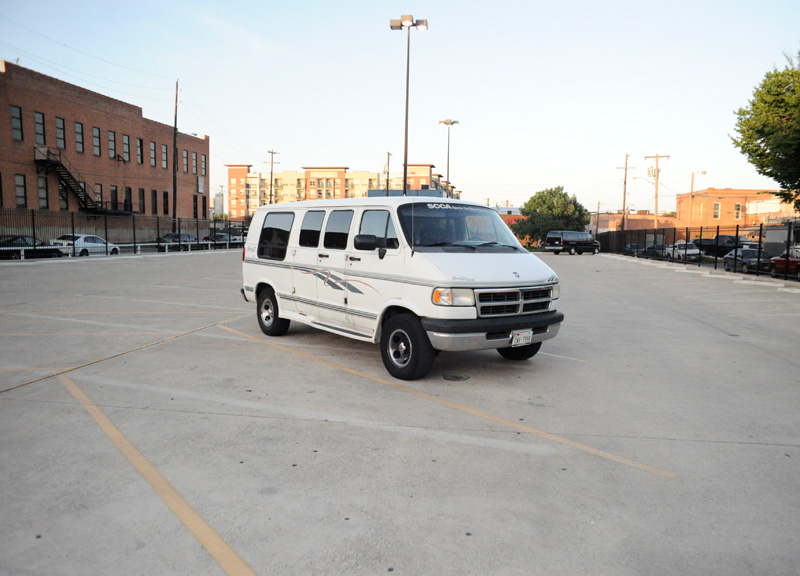 Convoy & The Cattlemen's Van Is Pretty Much Invincible.

Despite boasting a sound, a look, and an instrumental palate that is distinctly country and western, just as many rock and punk fans are likely to show up to a Convoy & The Cattlemen gig on a given night than members of the pearl-snap-and-jeans set.

This could have something to do with the fact that Convoy steel guitar player Alex Johnson also splits his time with local metal outfit The House Harkonnen, sure. More likely, though, it has to do with the fact that, when this band whips out their covers of classic western tunes like Tex Williams' “Smoke! Smoke! Smoke! (That Cigarette),” they do so at unbelievably blistering tempos. Better yet, unlike so many run-of-the-mill punk groups, Convoy does this with machine-like precision — and every member of the group is capable of pulling a ridiculous solo or lead lick out of their back pockets at any moment.

This past week, just before the band's Three Links gig on Friday night, we caught up with fiddle player Sheridan Silver, drummer Chris Acosta and the rest of their bandmates to ask about their van and punk rock leanings.

What did we discover? If drunken fights and good puke stories are considered punk rock, then Convoy & The Cattlemen are the Sex Pistols of North Texas country bands.

Band Name: Convoy & The Cattlemen.
Van Name: “Van Morrison. Or The Dubstep Machine. We always prep ourselves for shows by listening to dubstep on the way. We blast it to and from shows. That's why we call it The Dubstep Machine.”
Year/Make/Model: 1996 Dodge Ram 2500.
Mileage: 193,770.

Where did your van come from? How did you acquire it?
Sheridan Silver (fiddle): “We got it off of Craigslist. [The guy] didn't speak really good English. He was Indian. He used it for his family to go to these sports car events. It smelled like Indian food. Now it smells like cigarettes, beer and cheeseburger wrappers.”

So it smells like a band's been in it.
Sheridan: “It's been barfed in, pooped inâ€¦”

What makes your van special? What are its best and worst features?
Sheridan: “It's special because we can trash it out and nobody cares. It's just bad. I'd never let my car get this dirty. What are its worst features? Lack of A/C in the Texas summer is probably the worst thing ever. But everything else is pretty awesome. The seat folds down into a bed. We've slept in it. We've camped in it.”

Chris Acosta (drums): “It's so great. We can be anywhere — it doesn't matter where — and I can come in here and smoke.”
Sheridan: “It's a smoke-out session area.”
Chris: “It's so dark and tinted.”
Sheridan: “This is also used for transporting dogs in between shows. They've chewed up some of our merch.”

Who usually does the driving?
Sheridan: “Our steel player Alex [Johnson] or me.”

Is anybody not allowed to drive it?
Sheridan: “[Our lead singer] Tyler [Morrison]. He's usually too drunk. But he has before. We've had some wild nights with Tyler. He usually goes to the back if he rides in here because he drinks too much and his girlfriend usually drinks too much. If she gets in here, there's usually going to be a fight. She's fought people in this van, she's kicked this van, she barfed all over everyone in here one night. Half the band quit the next day.”

OK, you have to tell that story.
Sheridan: “That was such a bad night. We had to cancel our show the next day because half the band refused to play the next day. Everyone was so mad. [Tyler's girlfriend] Holly was stomping his hat out in the parking lot. Stomped it into a pancake in Denton at Hailey's! Then she came in here and barfed all over everything. And people! It was a really crazy night.”

Obviously, you didn't stay broken up.
Sheridan: “Yeah, it was like a week later we were like, 'Man, we gotta keep going. This is so stupid.' We lost our bass player, but we got Jimmy Duvall two weeks later.”
Chris: “He was the missing piece. So that had to happen.”
Sheridan: “It had to happen. It was just a rite of passage for our band. Somebody barfing, and everybody quitting.”

Do you have any good breakdown stories?
Sheridan: “It's never broken down. It's never had a flat tire.”
Chris: “Knock on some wood veneer.”

What are your best memories from being in the van?
Sheridan: “The one night when Tyler was telling us great stories. This was a night when everybody was in the van and we were coming back from Double Wide. Tyler was shitfaced and he was like, 'Man, if you guys don't change the CD I'm going to come up there and it's going to be bad for everyone in this car.' And he kept throwing out all these one-liners. We were like, 'I don't know where he's coming up with this shit!' We were laughing so hard we almost had to pull over.”

What was the CD?
Sheridan: “I don't remember. Probably dubstep. He hates dubstep.”
Chris: “He doesn't like it at all.”
Sheridan: “He was wanting to listen to Dwight Yoakam real bad.”

What are the best modifications you've made to the van, decorative or otherwise?
Sheridan: “We put in a trash bag. That's the best modification; it changed our life. We put in a roll of trash bags — they're vanilla- and lavender-scented. Oh, this is something funny: Every time we park the van at Alex's house, something falls off. Like little pieces of plastic and shit. We ripped off all of the plastic. That's why there's exposed insulation and shit.”

Anything else we you'd like to tell us about your van?
Sheridan: “We've hit a lot of things in it. You can't tell by looking at it. But we've plowed into a lot of things. It's indestructible.”

What kinds of things have you plowed?
Sheridan: “Cars. People. I don't know. If it doesn't fit somewhere, we make it fit.”

Convoy and the Cattlemen performs August 3 at Three Links. 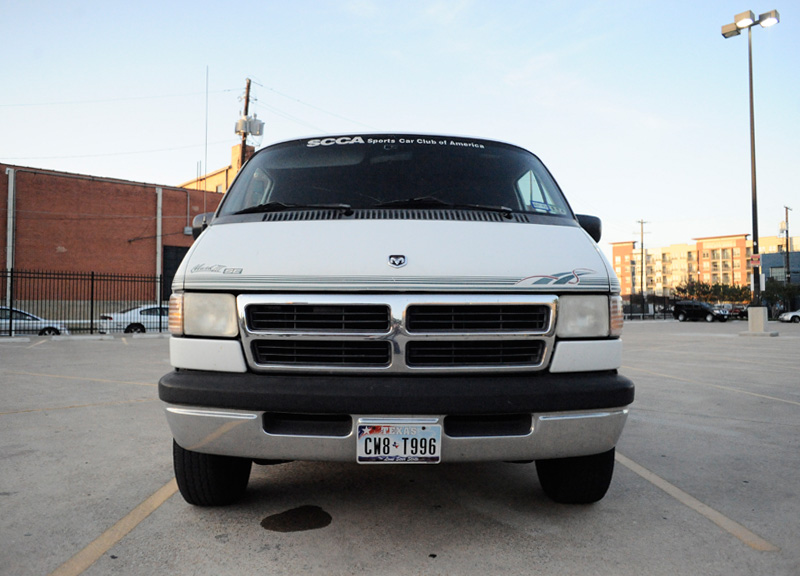 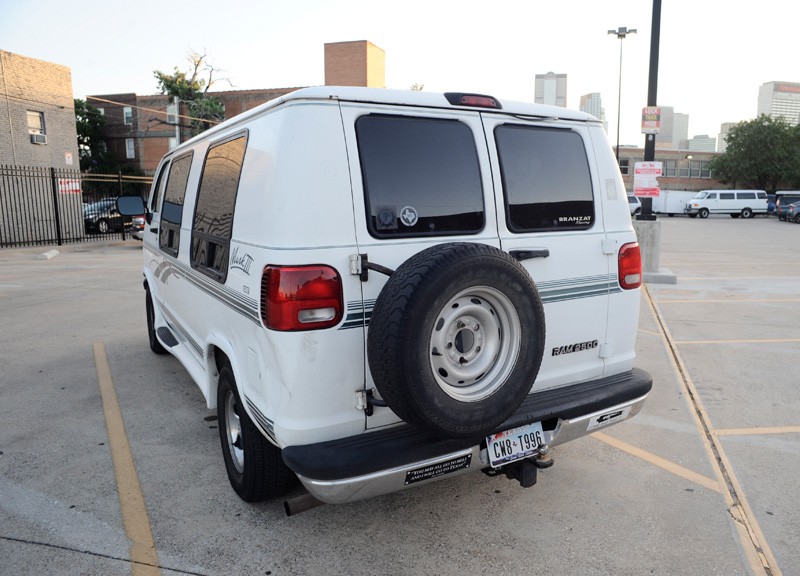 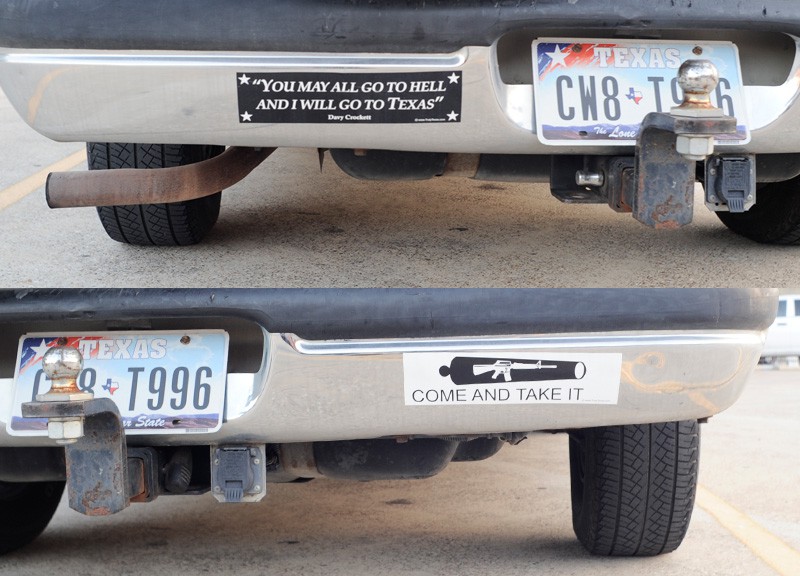 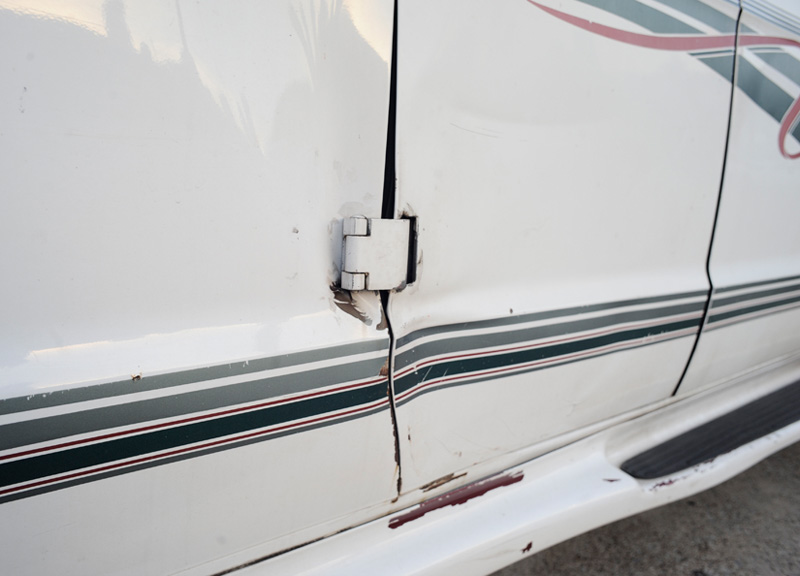 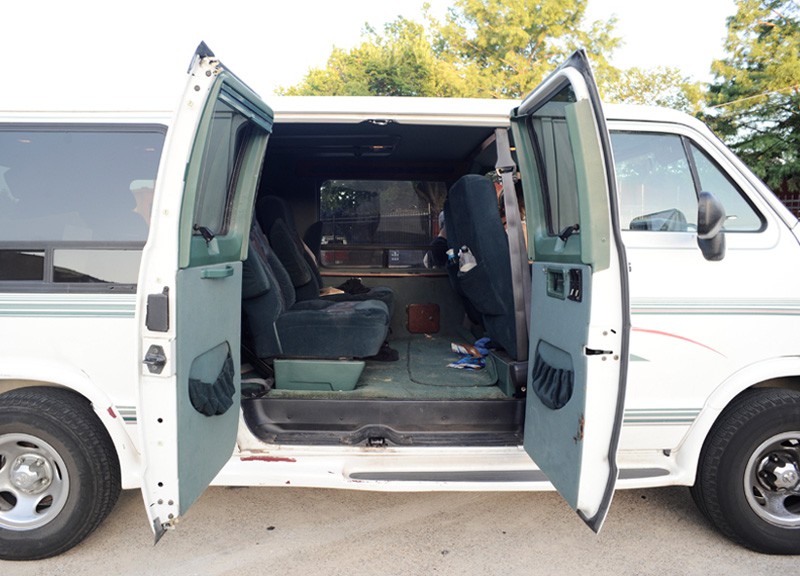 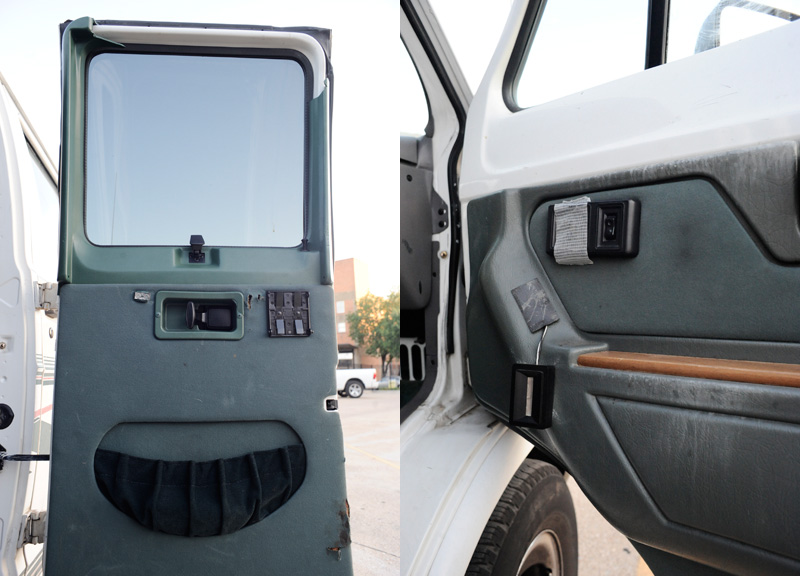 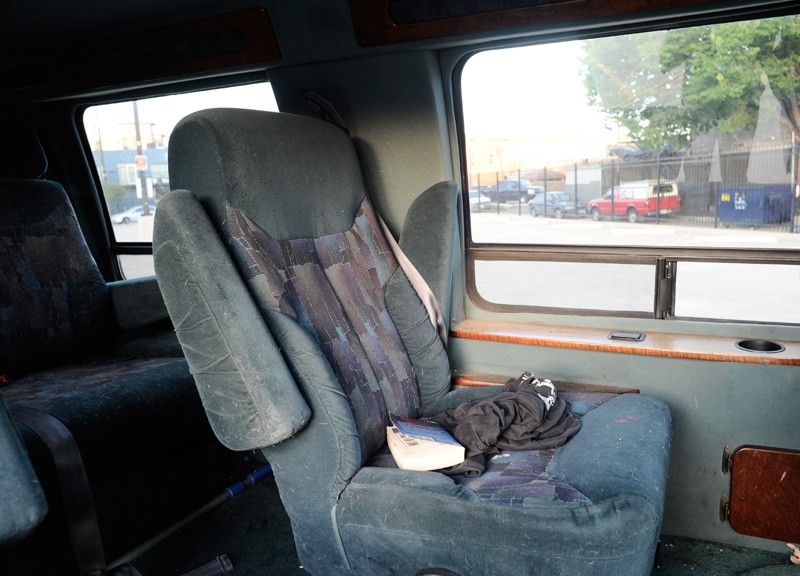 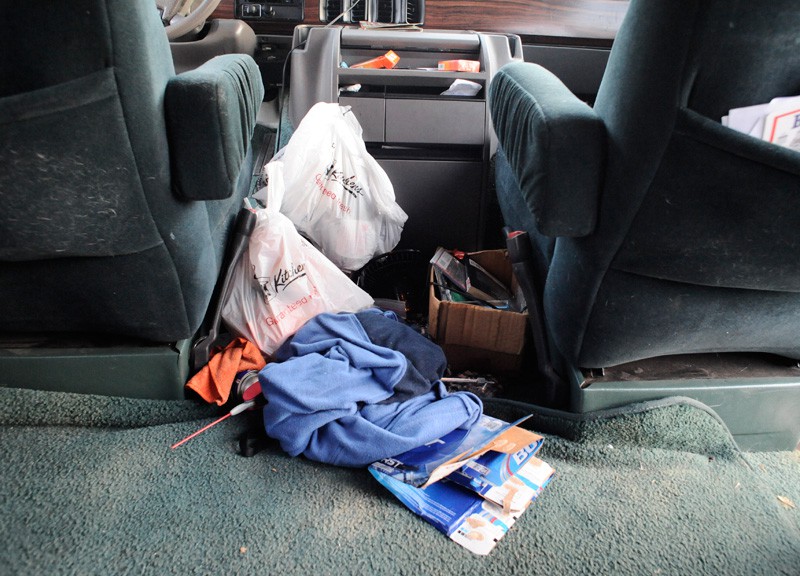 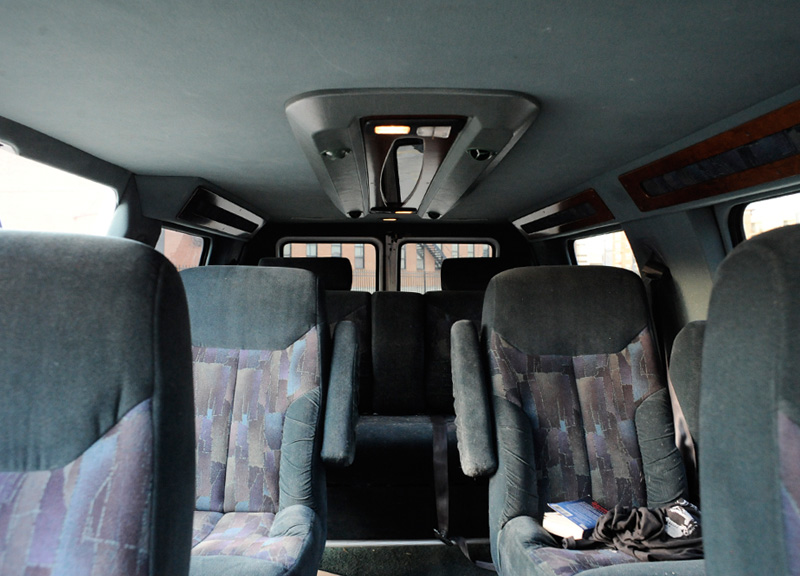 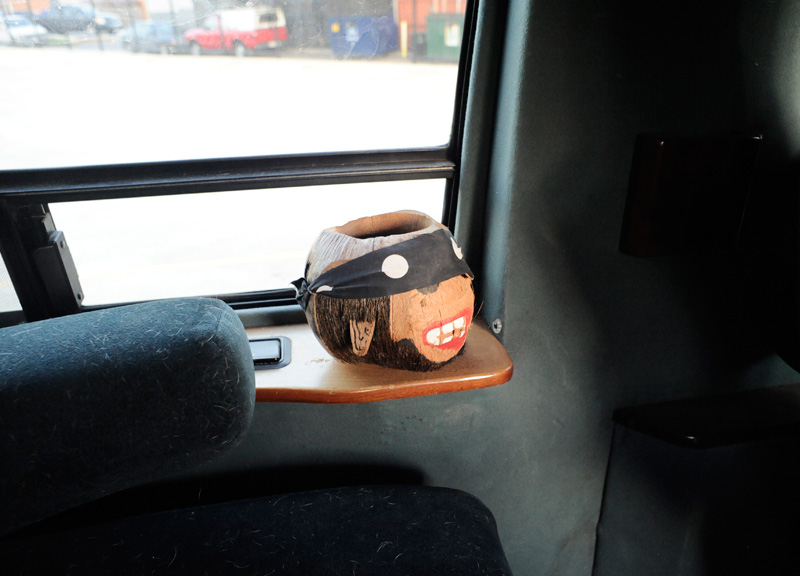 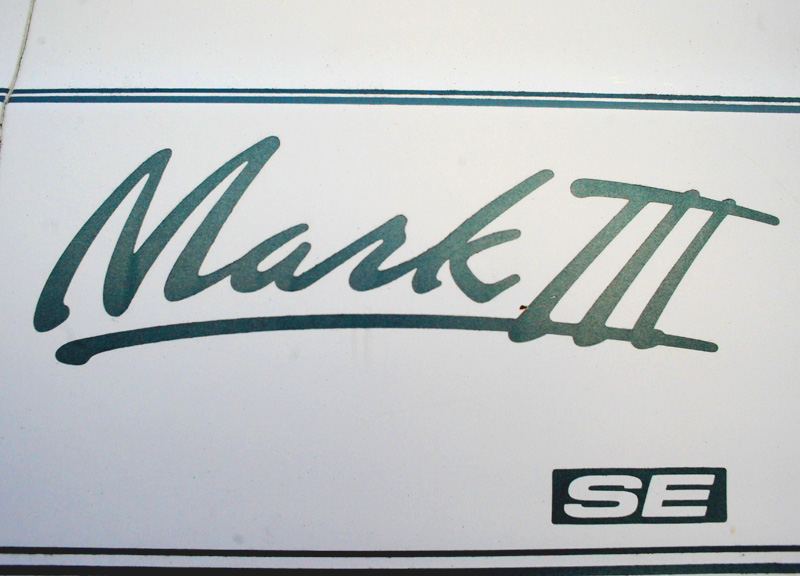 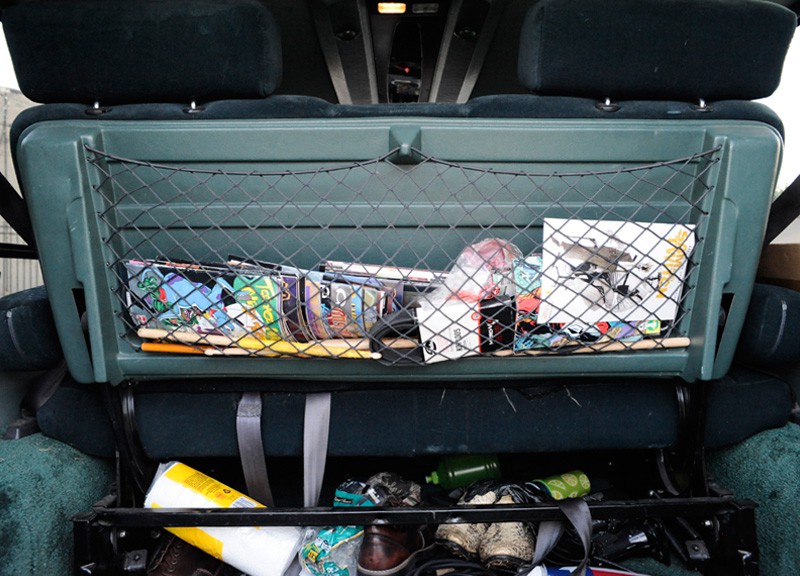 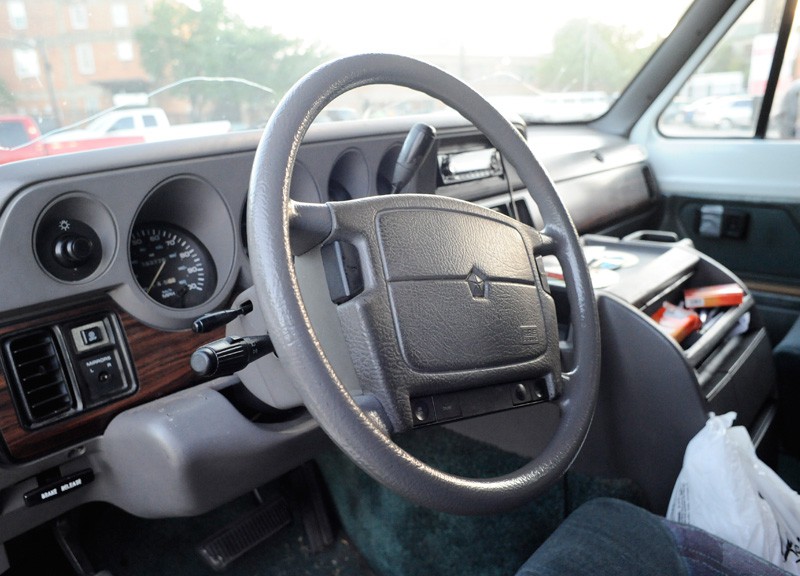 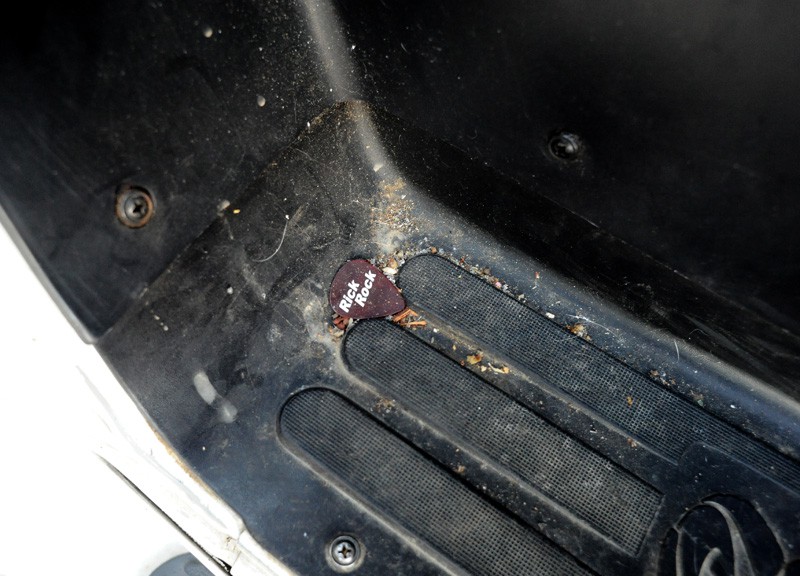 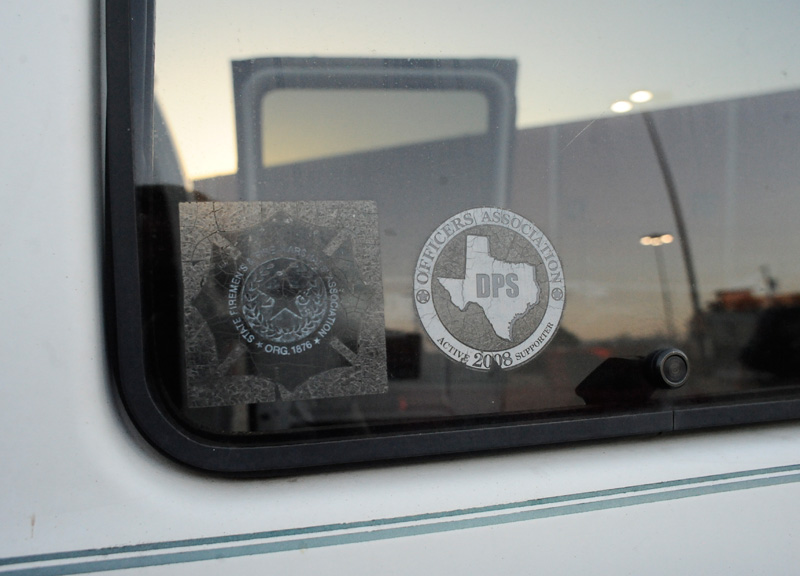 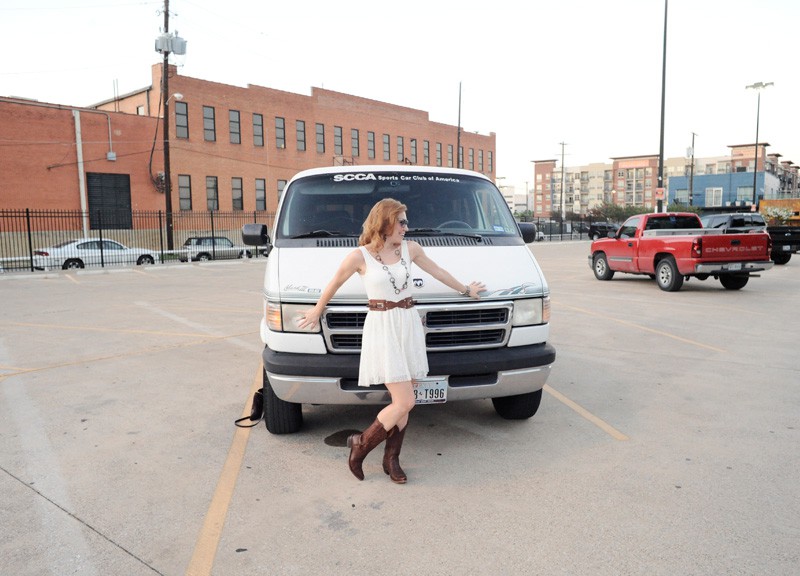 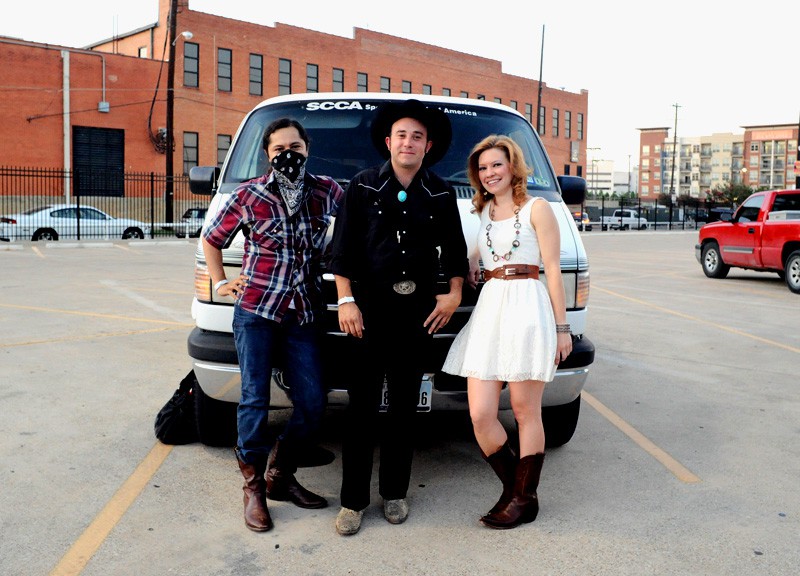