The 10 Best Episodes Of MTV’s Daria. 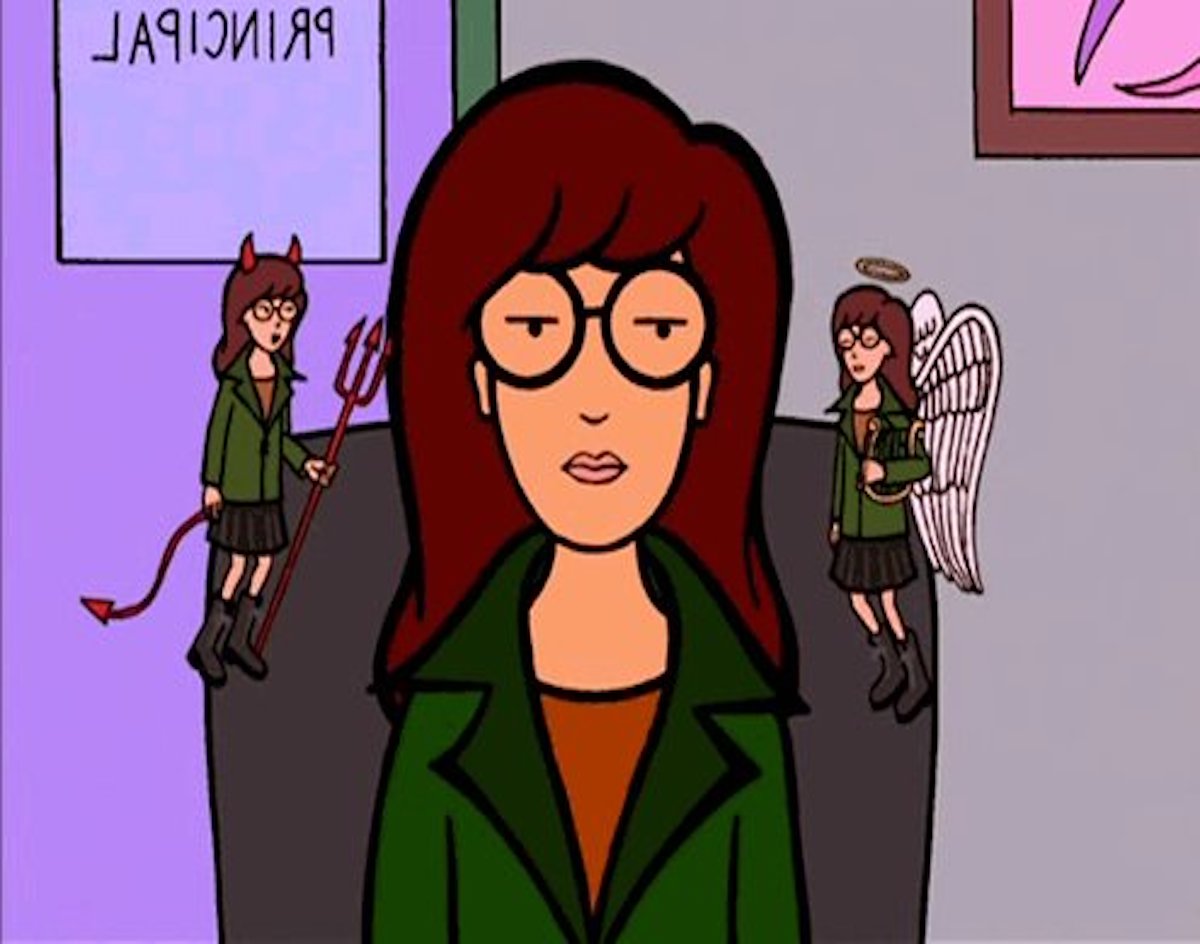 In Honor Of Daria’s 25th Anniversary, Let’s Celebrate The Legendary, 90s Animated Protagonist With The Show’s Most Memorable Episodes.

Even after 25 years, Daria Morgendorffer’s teenage outlook of her sick, sad world is still relatable, quotable and representative of our modern-day lives. Daria, who ranked #41 on TV Guide’s list of the top 50 greatest cartoon characters of all time, is the misanthropic heroine we need now more than ever.

Daria made its famous debut on MTV on March 3, 1997, as a spin-off of Mike Judge’s adult animated comedy series Beavis and Butt-Head. Her character was first introduced on the show as the opposite of the two teenage, metal-head idiots. If you recall, she was the intellectual girl the boys annoyed the hell out of. While Beavis and Butt-Head was created by Dallas native Judge, who also created King Of The Hill based on Dallas suburbia, Daria wasn’t necessarily created by Judge. But he did create Daria, the character, after the network advised him to add a female character to Beavis and Butt-Head when it tested low with female viewers.

Of course, it did. Beavis and Butt-Head were sexists.

The boys constantly made inappropriate jokes about women and the show’s portrayal of them didn’t help either. Beavis and Butt-Head were always trying to get it but never got it. If you catch our drift. One day in the studio, Judge drew up a version of Daria based on a girl he knew in high school by the same name. Essentially, he drew her – with the round glasses and everything. Daria, in Beavis and Butt-Head, was the only character the two protagonists didn’t see as a sexual object, and it’s where she developed her signature monotoned voice after initially being an expressive character.

By 1994, with Beavis and Butt-Head’s success as an animated show and its problematic disrespect for women, MTV realized it needed a female, animated character that women would want to see on TV. That’s when Daria would have her big break. Daria creators Glenn Eichler and Susie Lewis didn’t want Daria’s spin-off to have any similarities to Beavis and Butt-Head, including its animation, and never made references to them. Well, there was that one part in the pilot where Daria mentions her old school, which she attended with them, but that was it. Judge also didn’t want anything to do with the spin-off and has admitted to only watching a few minutes of it.

After a five-minute pilot was shown to a focus group, people immediately latched to her “real teenage girl” character, Lewis told Variety. Daria dared to used her monotoned voice and deadpan humor to comment on all the controversial atrocities happening around her – and she was right to do so. Even now, with its 90s fashion and eye-rolling fads, Daria is timeless. It’s a binge-watch-worthy series that makes you think Daria was ahead of her time. Yet, she wasn’t. What she thinks is what we all think – she just had the guts to say it.

Set in the fictional suburban town of Lawndale, Daria focused on the character’s high school life, which poked fun of pop culture and social classes. Daria and her best friend and aspiring artist Jane Lane were the only two intellectuals in a town full of stereotypical, dysfunctional characters. She went to school with oversexualized, dumb-blonde cheerleaders, cocky jocks, self-obsessed and materialistic haters and among others.

She’s pessimistic, cynical and sarcastic and has a crush on an older, laid-back band member. She proves that hell is indeed a teenage girl.

We can’t claim Daria as a Dallasite – as much as we want to – but thanks to Beavis and Butt-Head, we have such an iconic female character like herself. So, fuck it, let’s talk about her anyway.

We’re wishing Daria a happy birthday with her best 10 episodes. You might develop her sarcastic tone after a few, but that’s not such a bad thing.

Throughout the series, Daria and Jane’s are quit inseparable, and even though they have minor disagreements they don’t it such a big deal. However, Tom, Jane’s new boyfriend, was a big deal. In this episode, Daria helps Jane dye her hair and complete botches it. Daria initially hates Tom when he starts dating her best friend, but then they start having feelings for each other.

The cutest episode with Daria and Trent <3 Trent is Jane’s cool older brother, Daria’s crush from season 1-3 and frontman of his band Mystic Spiral — which insist they need a name change every episode. Here, Daria decides to get her belly button pierced and Trent hold her hand during the procedure. A very blushy episode.

Daria and Jane decide to ride with Mystic Spiral and head to Alternapalooza Festival. It’s not a smooth ride for Daria. The Fashion Club — Lawndale High School’s snotty girl group that Daria’s sister Quinn has joined — and other Lawndale students also try to go to fit it. Doesn’t quite work for them, though.

Jane joins the track team and Daria is against it. Suddenly Daria is left on her own that she starts talking to herself. First, Daria is kind of selfish for this, but then she starts ~ realizing ~ stuff.

When a popular, obnoxious alumni Lawndale star quarterback visits Lawndale and the dies in a freak accident, the whole school is shook. Everyone starts coming up to Daria for advice on how to deal with being sad. Everyone thinks Daria is such an expert on being miserable and it starts to get on her nerves.

Daria and Quinn are bridesmaids at their cousin Erin’s wedding. Daria realizes similarities between her and her aunt Amy, which is really sweet to see after not fitting in with the rest of the bridesmaids.

Haha, like Jane’s Addiction. Get it? Anyway, we’ve circled back to the Tom conversation. After Daria steals her man, Jane starts feeling like the third wheel. If you hate Daria by now, we get it. It’s a really weird storyline, but also super realistic. Let’s face it, we’ve all been there. Still, how dare Daria do this to our fave.

OK, THIS ONE RIGHT HERE. Daria and Tom dating now (ugh) and they fall asleep in Daria’s room after reading all night (lame). People start rumors that the two are sexually active and Daria actually considers it???? Interesting…

It’s Lawndale’s homecoming parade and obviously Daria is not up for it. Although she does run into it while she’s running an errand. She also runs into Tom, who’s looking for Jane. This is the first episode where Daria and Tom start getting along after a rough start. Jane, sis, watch out please.

This one’s actually kinda emotional. A large refrigerator box reminds Daria of the times she hid as a kid. She remembers painful memories that make her think she’s a burden to her family because she’s a little different. This one really explains Daria’s character and right at the end of the series. Daria and Quinn, who’s always rejected her as a sister, share a sweet moment.