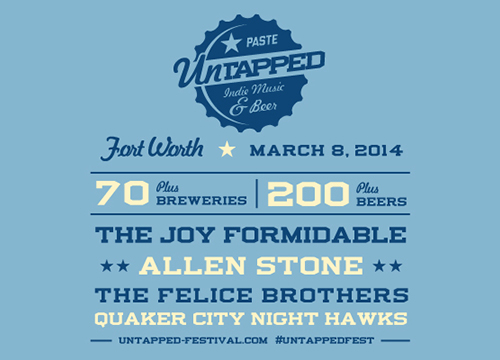 The Joy Formidable, Allen Stone and The Felice Brothers To Headline Untapped Fort Worth in March.

Well, it's officially announcement season for Dallas' events centered around South by Southwest overspill. Already this week, we shared with you the Ty Segall-headlined offering for Parade of Flesh Spillover Fest, as well as Third String Productions' pop-punk-filled South by So What?! affair.

Now Spune Productions is getting in on the fun.

Just this afternoon, that North Texas booking agency announced the initial bill for its 2014 Untapped Festival in Fort Worth, which this year will go down the weekend before South by Southwest, on Saturday, March 8. Last year's affair, you may recall, went down at Panther Island Pavilion; organizers have yet to release details on this year's location.

But they at least know some of the bands performing: The ever-awe-inspiring The Joy Formidable, Fort Worth Music Festival veteran Allen Stone, Dallas-singing folk-rock outfit The Felice Brothers and the always-great local bar-rock outfit Quaker City Night Hawks.

Per the Untapped model, there will be beer — and lots of it — on hand as well, with Spune once again promising 200-plus beer varieties from 70-plus breweries at this coming affair.

Presale tickets are on-sale starting this very second, and range from $21 to $60 in cost. Get them right here.