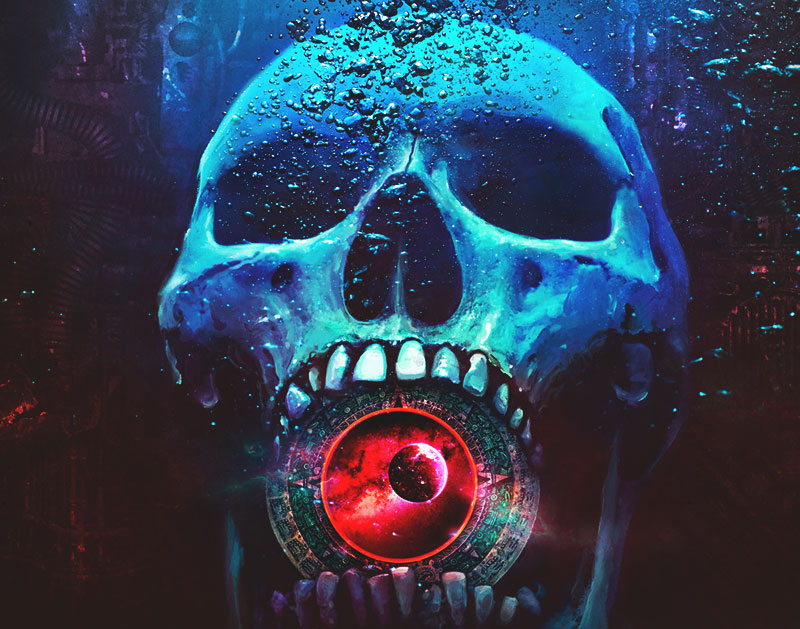 Mega Drive — Seas of Infinity
RIYL: The future that every science fiction film of the ’80s imagined.
What Else You Should Know: Dallas’ super reclusive and mysterious Bandcamp God is back with another collection of soundscapes, and this one’s possibly his most hyperactive grouping of songs yet. It’s a little jarring of a listen at first blush, but it’s a nice progression from an artist who has long mastered the art of the score. Here, he seems to be trending in a more EDM-friendly direction with his sound, which maybe isn’t the worst idea we’ve ever heard, at least from a business model standpoint. Either way, there’s no denying the care that goes into these complex tracks.

Coach Tev — “Jeep Sport”
RIYL: Having the keys to the Jeep… vrooooooooom.
What Else You Should Know: Seems like it’s been a minute since we heard from the Dallas-area rap collective known as Channel X, but this week, we get another taste courtesy of Denton’s Coach Tev. Produced by Cambino and featuring frequent Tev collaborators Jay Luse and Söleil, the song is the first tease off an upcoming Tev and Cambino collaborative EP release called I Fell In Love With My Mistress. But, more than that, it’s a welcome return from Tev and he and his pals spit game about how to treat a woman over a deliberately paced beat that’s suited well for the cause.

Blands — Blands
RIYL: Prioritizing energy over anything else.
What Else You Should Know: This new Dallas garage punk trio is an interesting blend of experienced and fresh faces, featruing former Sealion drummer Alex Poulos on the kid behind bassist Dylan Tarver and guitarist/vocalist Nick Papaioannou. Taking things perhaps in a more early Nirvana direction than so many of their area genre peers, this group’s also got a thing for embracing all things wheels-off. At the band’s release party for this new collection at Three Links on Thursday night, the group — as it has in past shows — spent its final song by allowing its fans out in the crowd to play its instruments for the last couple of minutes before calling things quit. It wasn’t exactly sonic bliss, but there’s no denying the thrill the crowd gets out of that offering.

Bobby Sessions — “Ways To Go”
RIYL: Realizing that today is the first day of the rest of your life.
What Else You Should Know: The latest video from Bobby Sessions’ grateful. EP dropped today and finds the performer hitting up — or, well, running past — at least 20 locations around Dallas while spitting rhymes about realizing he still is a long way off from getting where he wants to go, despite all he’s accomplished already.

Curtis Mayz — “5:38 AM”
RIYL: Ladies leaving their man at home.
What Else You Should Know: We’ve shared this song before, but Curtis Mayz just dropped the visuals for it, and premiered them over on Pigeons & Planes. As noted before, it’s a catchy flip on Destiny’s Child’s “Jumpin’ Jumpin'” and the video makes for a solid companion piece. Still, it’s not quite our favorite overnight-timestamped song out of Dallas in recent years. It’s definitely a solid track, though, and the latest piece of evidence that says Mayz is one of Dallas’ top rappers to watch.

SuperSonic Lips — “Fool”
RIYL: Craft beer competitions.
What Else You Should Know: Last year, the Lips entered into and won a Ninkasi Brewing-hosted battle of the bands competition that earned them a spot on the Untapped 2016 lineup alongside TV On The Radio, Gogol Bordello and more, but perhaps more notably got them a budget with which to record their music. This song is the first taste of how the band’s spending that budget, and is the first track off the group’s upcoming Blinded Pleasures EP, which was recorded in Ninkasi’s hometown of Eugene, Oregon, at the top of the year. Expect to hear the whole collection in July.

AV The Great — “Summer Vibes”
RIYL: Summer, summer, summertime.
What Else You Should Know: The longstanding biggest name in the Denton rap game returns with an ode to the summer — or, specifically, getting high during the summer. It’s not quite the glorification of summertime pickup basketball games because basketball courts in the summer got girls there, but it’s relatable enough.

William Austin Clay — By One’s Self​.​.​. It Was Done
RIYL: Finding one’s sound.
What Else You Should Know: William Austin Clay is one of the better-kept secrets in the Denton lo-fi pop rock scene. But even he admits this release isn’t what one might expect from him. A symphonic work in four movements, Clay concedes in an email to us that, “on paper, the idea might sound kind of corny, but I found the results to be pretty interesting, albeit somewhat different than my previous work.” It’s indeed a far cry from his efforts in Blessin’, Dripping Wet and Delia Haunt, but it’s also a whole lot more complex and thoughtful.

Catslash — Catslash
RIYL: Annoying PETA.
What Else You Should Know: Do you like darkwave? Do you hate cats? This might be the band for you. Catslash has been quietly releasing music since 2014, and just popped up on our radar thanks to a shout-out from our pal Mikel Galicia at the Dallas Observer. The standout on this latest four-track effort is the third song, the cathartic “PIG,” which wouldn’t be out of place on a a Ho99o9 album.

Henry The Archer — Zero Is A Number
RIYL: Debates over when the millennium actually began.
What Else You Should Know: This Fort Worth rocker recently linked up with the crew over at Hand Drawn Records to release this collection of music. It’s got some classic turn-of-the-millennium indie rock vibes to it, which is a nice throwback. Would this be out of place on a compilation of songs from The O.C.? Not one bit.

King Karson — “Flex”
RIYL: Surprise hits.
What Else You Should Know: New-to-Dallas rapper King Karson originally hails from Cleveland, but found his way to Dallas not too long ago. An unexpected turn of events? Maybe, but that’s kind of how King Karson rolls. “Flex,” the rapper says, is just a freestyle that just so happened to pick up traction and earn itself more than 40,000 plays along the way. Hey, it won’t ever be as popular as the biggest song of this name ever to come out of Dallas, but it’s a nice intro into a new name to keep tabs on in town.

Plain Jane Francis — look
RIYL: Eschewing the shift key.
What Else You Should Know: The ever-prolific Plain Jame Francis returns with a new collection of three all-lower-case-titled tracks, and can be consumed in under six minutes altogether. As with pretty much anything else he’s released, these tracks are high lyrics on hip terminology and backed by inventive beats. Plain Jane Francis’ scatterbrain often gets in his way, and that’s maybe the case here, too, but his creativity is up there with any other hip-hop songwriter in town, and he remains among the under-recognized geniuses in the market.

Majik Taylor — Bad Faces
RIYL: Denton dream-pop
What Else You Should Know: Once upon a time (read: three years ago), pretty much every new band in Denton sounded like this. Of course, that’s back when there were still more than just a handful of proper venues for these bands to play. Better times? Better times. Still, this is a pleasant enough collection of songs, all of which were recorded at Midlake’s Redwood Studios, naturally.

Lil Lotus — “Bodybag ft. coldhart”
RIYL: Hating your parents. But also yourself. And your crush too.
What Else You Should Know: Lil Lotus exists at the intersection of late ’00s emo scene bands and modern-day hip-hop aesthetics, which is maybe a tough pill to swallow, but one that he actually pulls off with aplomb. Produced by nedarb, this song is about as good an intro into Lil Lotus’ sound as anything else on his Soundcloud page, and probably his most thought-out release to date, too. Is it for everyone? God, no. Potential audiences will either be all the way in or all the way out on this song by the time it hits its 20-second mark. And their opinions on Lil Lotus will pretty much be set from that point on. For our part, we don’t hate it and give the guy points for pushing sonic boundaries.

jACQ — “Back To Life”
RIYL: Lazarus, I guess?
What Else You Should Know: A few weeks back, we shared with you the first single off of the Minnesota-raised, Dallas-based pop singer born Jacqueline Jaquez’s debut album. Here’s the second taste. It’s just as poppy and ambitious as the first!

Rizzo Blaze — Blvze
RIYL: Soundcloud rap that doesn’t always forget about the hook.
What Else You Should Know: Soundcloud rap often gets knocked as all vibes and no soul. Rizzo Blaze’s new six-song collection is more than that. Dude’s got a real ear for hooks, as evidenced by the opening track, “Best For Less,” which is built around one helluva catchy one.

David Morgan — “Alive. (feat. j.m.r)”
RIYL: Questioning everything.
What Else You Should Know: Produced by Drae Da Skimask, this song exists as a teaser for the former Mohicans rapper’s next EP, called Fears Funeral, which is due out later this summer. Here’s looking forward to that collection as Morgan is one of Dallas’ great creative talents, beyond even his raps. Dude’s also a poet and a novelist. He’s a bad man.

Mr. Kitty — A.I.
RIYL: Giving pets human names, and vice versa.
What Else You Should Know: First time I ever came across Mr. Kitty, he was a teenager opening for Crystal Castles at the House of Blues back in 2010, and he pretty much blew the entire room away with his fully realized electro-pop sounds. Interestingly, and contrary to so many other acts across any genre, Mr. Kitty’s only gotten poppier with age, as evidenced by this collection that he quietly dropped a few months back. Into what you hear? Catch him for free at the Armoury on Sunday, June 4.