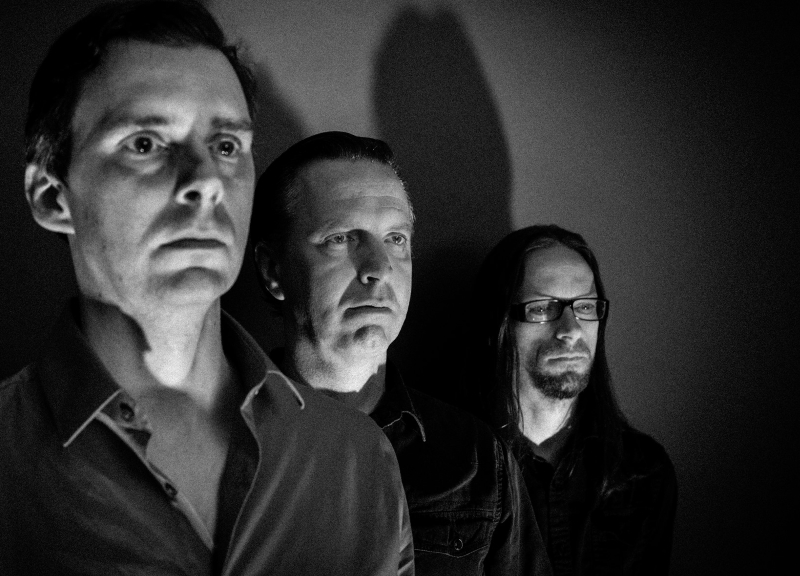 Nervous Curtains — “The Visitors” & “Light Up the Sky.”
RIYL: Dancing queens.
What else you should know: Just a few months after releasing its Con LP back in October, Nervous Curtains is already back with a brand new EP called Low Defender that features a new single, three covers and a trio of Con remixes. We're premiering two of the uncharacteristic covers above, one of which is Van Halen's “Light Up the Sky.” About that tune, band frontman Sean Kirkpatrick tells us, “I've always been fascinated with reinterpreting guitar songs on keyboard instruments.” And then with regards to its surprisingly pop turn on Abba's “The Visitors,” he has this to say: “This song was suggested by the graphic designer of our three full-lengths, EJ Anttila, as payment for all the free work he's done for us. I'd honestly never heard this song before and didn't think I liked Abba. But this is a dark, paranoid Cold War-era song, so it's natural fit for us, and it gave me some appreciation for their songwriting genius.” Both interpretations are great, but when the hook, which features backing vocals from Little Beards' Nan Little Kirkpatrick and Pinkish Black's Daron Beck, gets going about two minutes into “The Visitors,” the results are undeniably amazing. The rest of the EP earns its release on May 4 on cassette and CD via Fort Worth's Dreamy Life Records.

Kevin England — About as Country as Oklahoma's WinStar World Casino and Resort.
RIYL: Commercial rock.
What else you should know: Can we just talk about what an amazing title this lo-fi Grapevine synth man came up with for his latest EP? Two snaps to you, sir. Even better is the one for the EP's opening track, “I'm Stuck with this Commercial Rock (Put This Song In Your Business' Next Commercial!)” Just go ahead and give this man all the snaps. But Kevin's more than just a clever title machine. The aforementioned cut actually is deserving of getting some radio airplay. A looping theme builds and builds for its breezy two minutes while England offers up lines like, “I'm an animal confused by stairs.” When the organ and drums creep in about halfway through is when it really gets cookin'. Oh, and as a bonus, when you actually buy the thing from his BandCamp page, he'll throw in his previous eight releases for free.

Sad Cops — Liam Murphy Holt.
RIYL: Overachieving.
What else you should know: In our humble little opinion, nobody released a better song last year than 16-year-old Coppell High School student Grayson Harris and his Sad Cops outfit did with “Best Friends.” A few months older and wiser now, the kid's followed that gem with a very worthy follow-up in the form of debut LP Liam Murphy Holt. It's the product, says Grayson, of two years' work in his suburban bedroom. We won't go into specifics, but let's just say it's a lot more productive than what we were doing all that time in our suburban bedroom from ages 14 to 16.

Astronautalis — “Attila Ambrus.”
RIYL: Hungarian folk heroes that pose as professional hockey players by day and gentleman bank robbers by night.
What else you should know: Say what you will about how local Astronautalis is. Does a stint at SMU make you a lifetime Dallasite? We're not ones to pick nits, and we don't really care where the emcee is or isn't from. But this song, from his upcoming Cut the Body Loose LP, is Dallas as hell. Produced by Picnictyme, and featuring drum programming from John Congleton, plus synths and bass courtesy of Adam Pickrell (and, OK, Virginia-based horn player Reggie Pace too), this is a bit of a different sound than we've heard from Mr. Bothwell — and we fucking love it. It's fast-paced and funky and oh so choice.

Ethereal & the Queer Show — Fairy Super Crystal Blue.
RIYL: Ambient music that's way too good to just be “background” music.
What else you should know: Yeah, we posted a track off this last week. Who cares? The entire album has since been released and it's really fucking good. Please don't sleep on it.

Couch Weed — 7 Gram Dro Blunt.
RIYL: Smoking weed, smoking wiz, doing coke, drinking beers, drinking beers beers beers, rolling fatties, smoking blunts.
What else you should know: So you mean to tell me a band in Denton named itself Couch Weed and released a concept record about smoking weed and it came out on 4/20? Try as they might to push the bit well past the threshold from humorous to eyeroll-inducing, there's actually some decent bits of noise rock buried in there, too. It's just somewhat hard to see/hear through the haze of pot smoke and one-note weed jokes.

Erykah Badu — “I Been Going Thru It All”
RIYL: Getting high and prank calling Tyrone.
What else you should know: After scoring the cover of The Fader, Badu popped into the studio and cranked out a Happy 4/20 jam where she includes a line about it. See, this is how you do a 4/20 song without looking like a hokey fool. And that's why she's forever the Queen.

Post Malone — “Go Flex.”
RIYL: Showing off in front of your squad.
What else you should know: Just yesterday, Yung Posty dropped the first song from an upcoming mixtape he says is “on the precipice of release.” Precipice? There's no way that's a word. Like the tape's cover, there's fire all over this acoustic guitar and 808s-filled track. It's not that far off from his past successes like “White Iverson” in that regard. It even mentions an athlete in the chorus — y'know, the part where he talks about going “Stone Cold with the flex.” OK, so not an athlete, per se, but a damn fine sports entertainer to be sure. And that's the bottom line. Also, how great is it for Post to finally release his first mixtape? Maybe the size of his catalog will soon match his growing celebrity.