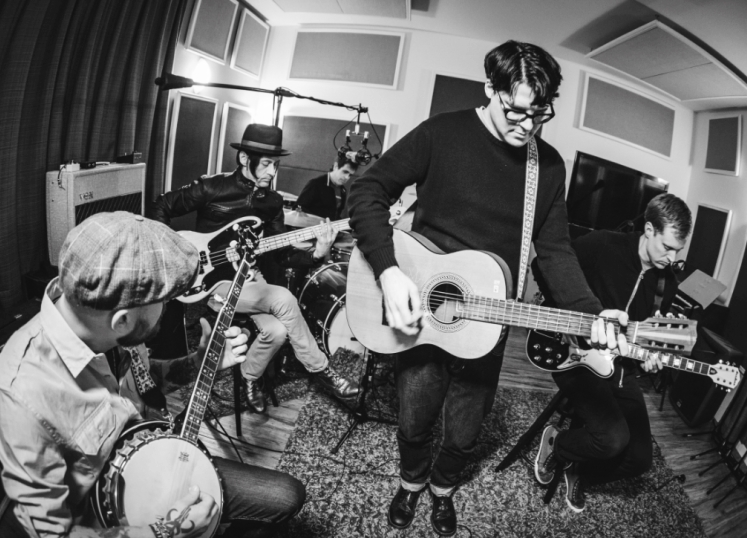 Daniel Jones — OakCliffWORLDWIDE mixtape.
RIYL: The O.C.
What else you should know: After touring with Janet Jackson and Justin Timberlake in recent years, jazz-minded pianist Daniel Jones came back home to collaborate with a whole bunch of folks from his own hood on his own project. While a proper album is still in the works, this 24-track mixtape will keep you busy for quite a while. You can read more about Jones here.

Sur Duda — “Chandelier.”
RIYL:
What else you should know: For the third time now, Fort Worth's Dreamy Soundz and Lo-Life Recordings (aka Dreamy Life Records) is putting out its annual Group Therapy comp, this one featuring 22 local or semi-local “bands of consequence.” We've already posted VVOES' contribution to the tape, and now we've got Sur Duda's offering. Sur Duda? Ah, that's the dream-wop solo project from War Party mastermind Cameron Smith. You can grab a cassette copy of Group Therapy vol. 3 on June 12 at Shipping and Receiving, where 19 of the comp's bands will perform.

Hand Drawn Records — A Compilation. Volume 5.
RIYL: Compilations. Period.
What else you should know: As you might have gathered, this is the fifth compilation album released by DFW-based Hand Drawn Records. It's a mix of live and studio cuts from bands that have worked with the local label in the past, including Jack Kerowax, Jonas Martin, Daniel Markham & Claire Morales, Blue Healer and Vanessa Peters. It's out today, and you can stream it above, order a vinyl copy from the Hand Drawn site or download a free copy here.

Nervous Curtains — “Fox-O-Cult.”
RIYL: Taking a different approach.
What else you should know: Man, everybody be making compilations! Swedish label Repartiseraren put one out this week, too, and our own Nervous Curtains wrote and recorded a track in the last two weeks just for the occasion. It's a bit more electronic-based than most anything the band's done in the past. That bears out with a post on the Nervous Curtains' Facebook page that reads, “We moved out of our comfort zone with this track, starting with a drum machine and building the track up from there.”

Poor Bastard Sons — “She Blew Me Off.”
RIYL: Origin stories.
What else you should know: With Rubber Gloves shutting 'er down next weekend, many Denton folks have been bit with the nostalgia bug. Loads of bands are reuniting to play at the doomed club in its final days. Baptist Generals is one of the bands playing at Gloves during its final weekend, and earlier this week, they decided to upload a 20-year-old track from BG predecessor band Poor Bastard Sons to the internet. Like the band describes it, the song's “a little more cornball and a little more country.” It holds up!

Catalina — “Bulletproof.”
RIYL: Low-key alt-country.
What else you should know: Famous drummer John Dufilho (The Apples in Stereo, The Deathray Davies) is releasing four different albums this year. First up is one from CLIFFFS (formerly Cliffs of Insanity) on June 11. Then comes the one from Cantina (formerly I Love Math) on July 22. Then there are two others. For the Cantina one, famous drummer Dufilho has assembled a crew of other famous locally-based drummers — Philip Peeples (Old 97's), Jason Garner (pAper chAse, The Polyphonic Spree) — plus Andy Lester (The Deathray Davies) and banjo player Marcus Hollar (Street Dogs). Download it for free above.

Pareidolia — “Bottom of the Morning.”
RIYL: Going unplugged.
What else you should know: Heaviness and effects are big players in Pinkish Black's arsenal. It's hard to imagine the guitar-less metal band's material with these integral elements stripped away. But no need to imagine, because ex-Grand Prairie resident Joel Soni has turned in a solo acoustic cover from the band's third LP. It holds up!

Spell 27 — “Possum Kingdom.”
RIYL: Dark hair, soft skin.
What else you should know: It looks like this minimal goth cover of the Toadies' 1994 classic was posted by San Antonio band Spell 27 about five months ago. Seeing as how Toadies heads to New Braunfels for its ninth annual Dia de los Toadies festival next weekend, now seems like just as good a reason to post it as any.

Pale Dian — “Pas de Duex.”
RIYL: Watching two dancers perform identical ballet steps together.
What else you should know: This marks the third single we've gotten from Blackstone Rangers offshoot Pale Dian. The now-Austin-based trio's debut LP comes out next Friday, June 3, via Manifesto Records, which, as a press release so dutifully points out, is also currently home to Dead Kennedys, “So Happy Together” band the Turtles and Puro Instinct.

Curtis Mayz — “Swangin'.”
RIYL: Being from the south.
What else you should know: Coming in July is Curtis Mayz's Real.Life.Raps EP 1.0. Inspired by UGK and joined by Mel from The Outfit, the first track Mayz dropped from the project is “Swangin'.” Says Mayz about his motivation behind the track: “Today, there isn't too much swangin' music left out there. So I just wanted to make some player shit that niggas can smoke and ride to.”

BigHand//BigKnife — Winner's Cup.
RIYL: Surprises.
What else you should know: The trio featuring members of Two Knights and New Science Projects (among others in their lengthy Denton underground pedigree) just put out its sophomore effort. And it rocks. It's loud, noisy, heavy and everything else it wants to be. It's available as a name-your-price download, and you should definitely make that happen, because there's a secret hidden bonus track that comes with it. It's a really unexpected classic rock cover, but we won't say which. We don't want to spoil the surprise.

FXXXXY — “My Pretty Little Undressa.”
RIYL: Blog rap.
What else you should know: It's been a few months since we first posted anything from FXXXXY, and we still don't know much more about him now than we did then, other than that he reps Dallas, something called the ANK Cartel and the same CMC management that reps Curtis Mayz. Anyway, he released this song yesterday, as well as a screwed and chopped version.