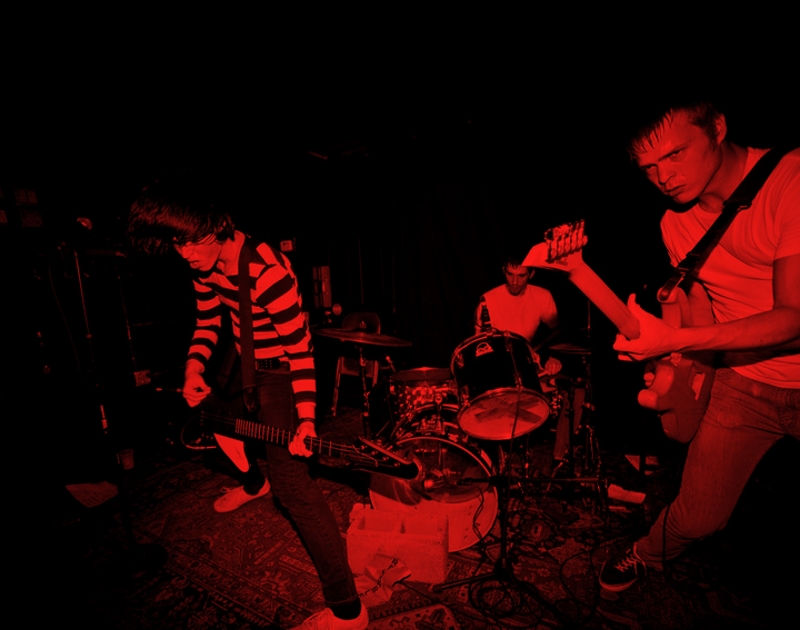 Check Out The Title Track From Bad Sports’ Fourth LP. An Apocalyptic Grinder About The Modern Age, It Sounds Like A Band Growing Up But Not Growing Tired.

Bad Sports – “Constant Stimulation.”
RIYL: Never stop, never stopping.
What else you should know: For the fourth time in 10 years, the Denton-bred, Austin-based trio Bad Sports will release a new album via Dirtnap Records later this month. Over that stretch, the boys have not only honed their chops together in this project, but in various other successful ones — like OBN III’s, Radioactivity, Wax Museums and VIDEO, to name a few.

But never before has Bad Sports’ own niche within that output felt quite so pointed as it does the title track from Constant Stimulation.

Previously content release a swirl of proto-punk-meets-power-pop songs to swill beer to, the onetime self-proclaimed “Kings of the Weekend” definitely sound more jaded than ever on this track, and weary of the modern world’s erosion into something that feels like the verge of a post-apocalyptic wasteland. These sentiments boil over as frontman Orville Neeley sings the following: “I need constant stimulation in my ears and in my eyes or I don’t sleep at night / Deprivation chambers only worsen my dreams.”

Lending to the vibes of the decaying new normal is a more stripped back production quality, which the band proudly proclaims as sounding “lean and tough” in the new album’s promo materials.

To us, it sound like a party band growing up but not growing tired.

Still, at its crux, this is very much a Bad Sports single — albeit one that’s just a touch more woke. Of course, punk’s always been a genre that splits time between partying and decrying the injustices of the world. So maybe things are really just the same as they ever were.

In that case, welcome to the modern age. It looks a lot like the old days.