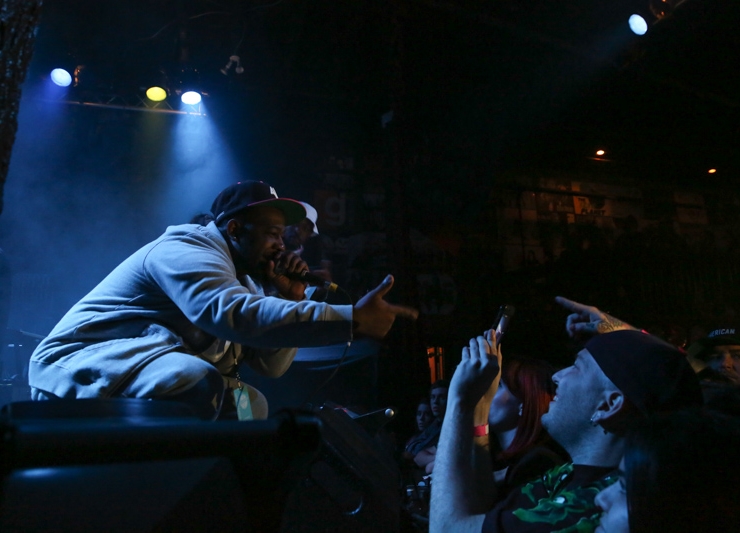 If you ever wanted a look into the changing demographics of hip-hop consumption and its shift toward mostly middle-class white kids, then the Yelawolf show at Trees on Saturday night was like a Discovery Channel special.

There was no shortage of the snapback-laden white males representing the amalgamation of BET- and CMT-raised 18- to 35-year-olds that make up Yelawolf's target demographic and peers, as well as a shocking number of “down-ass” dads peppered into the crowd, beers in hand.

The venue was packed as people waited in anticipation for Yelawolf to don the stage. Anticipation hung in the air — right along with a dense mixture of sweat and weed. By 10 p.m., the main floor of Trees was almost completely packed: People stood shoulder to shoulder, and any attempts to move throughout the space were usually met with the resistance of some drunk person boasting a less-than-clear understanding of personal space. If you weren't being jostled from one side to another as patrons tried to make their way through the crowd on this night, then chances were pretty high that you might be groped and/or headbutted — maybe even by the same person. That or you just stared on concerned, witnessing people too slumped to even hold themselves upright.

Yes, it was a motley, sometimes frightening, crew in attendance on this night. But the quantity of fans only worked towards the quality of the performance: Jerks be damned, no artist wants to perform for only a few faces, so better this lot than none, one supposes.

And credit to the performers indeed for making this crowd worth suffering through. In his main support slot following sets from A.Dd+ and Big Henry, Yelawolf labelmate Rittz flexed his lyrical prowess and showmanship, setting the bar pretty high for the headlining act. Each of the songs in his set were relatively short, which wasn't necessarily a bad thing since it enabled him to cover more ground. In between songs, he filled the space with an impromptu mix of freestyling and his own version of singing (read: melodic talking) that included an alcohol-induced rendition of Cutting Crew's “Died in Your Arms” that was shockingly in-key, but in a manner that was more entertaining than it sounds.

The same can be said of Rittz's entire set, actually. If your only knowledge of Rittz heading into this show was his features on Yelawolf tracks, then his performance was a great introduction to his back catalog. Sure, a lack of familiarity with his sound may have made it hard for the untrained ear to distinguish Rittz from Catfish Billy, but his oeuvre is dope enough to set him apart as an emcee in his own right with the potential to make a bigger name for himself, sans even the Yelawolf cosign.

All the same, Rittz is a member of Wolf's crew, so any likeness in his sound can be explained through that. But where Yelawolf's sound is more rap meets country and rock 'n' roll, Rittz's sound is a little more intrinsically hip-hop in nature, with more influences from the Atlanta native's hometown present throughout. Even so, the live guitar accompaniment used in both his set and the headliner's gave his music that feel of rock and country that draws listeners to the Slumerican sound.

And, right around 11 o'clock, the diving force behind that sound would finally make his presence known as the lights dimmed for the moment that everyone was waiting for. Right on cue, Yelawolf charged his stage, which was decorated with classic American fodder (complete with a “Midnight Murder Chevy” DJ booth), with all the fervor of someone who's truly passionate about what he does. The crowd returned the energy in kind with roaring, light moshing and a few failed attempts at lighter-waving. And, as someone who truly understands the demographics of his listeners, Yelawolf addressed his fans by dividing them into three groups — the hip-hop heads, the rock-and-rollers and the lovers of outlaw country, all of which are the major influences of his music. And lest anyone here questioned his legitimacy as a rapper, he had a song for them: Over a mix of Walk This Way and Sweet Home Alabama, Yelawolf belted out his case while also paying tribute to his roots.

That out of the way, the rest of his set consisted of a good mixture of music from across his catalog, including tracks from his Psycho White project with Travis Barker and good selection of old favorites from Trunk Muzik 0-60, including a performance of “Box Chevy” where he brought Rittz back on the stage.

As if the crowd wasn't pumped enough in that moment, Yelawolf then raised everyone's hopes by mentioning Eminem was chilling backstage — only to then crash those dream with a simple “Just playing!” Alas, the surprises for the night didn't end there, as the headliner then invited an audience member up on stage to propose to his girlfriend. Everyone was both shocked and excited for the happy couple (she said yes), with Yelawolf noting that he and his fellow Slumericans must have finally made it if people to want to propose at their shows now. This, the performer Michael Wayne Atha noted, was the first time that it had ever been asked of him.

Long story short: This definitely wasn't your traditional hip-hop show. Instead, it was a prime example of how different genres can intersect and flow almost seamlessly in the hands of the right performer. And though his music can be pigeonholed as hip-hop for the country fan, there was enough energy and diversity for just about anyone to find something they liked — even if the audience wasn't exactly reflective of that. 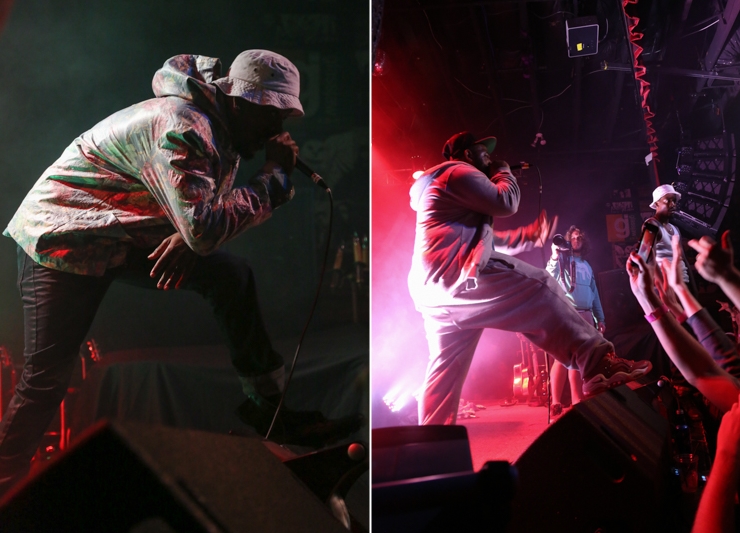 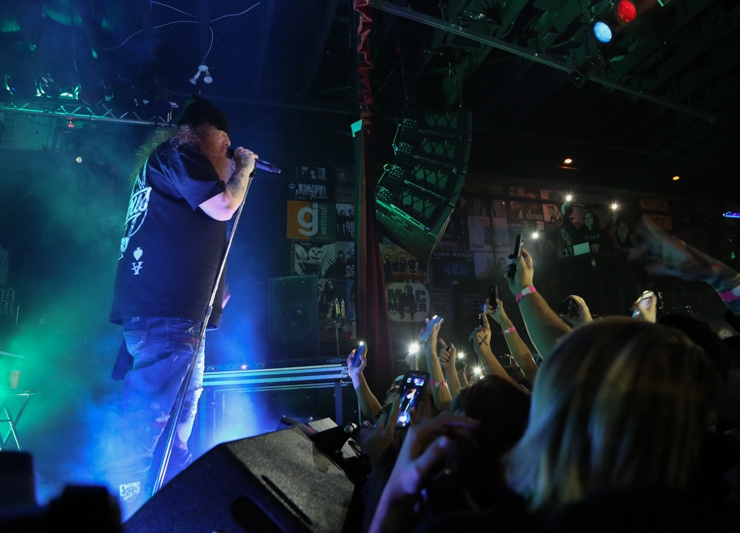 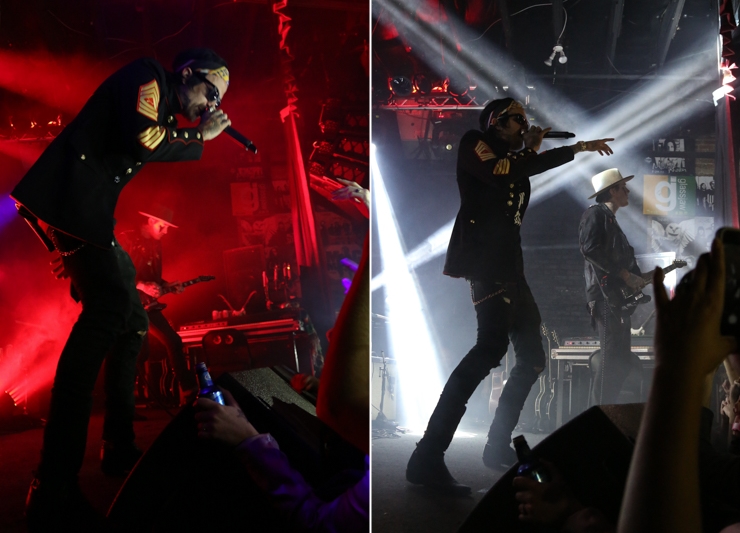 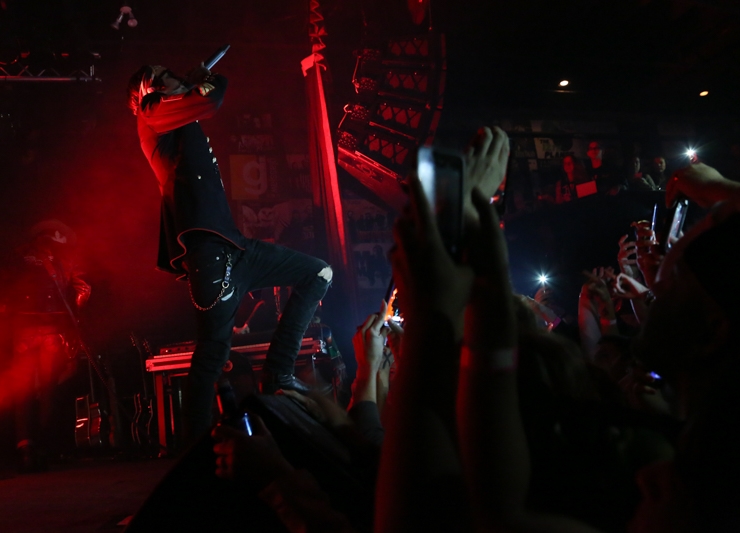 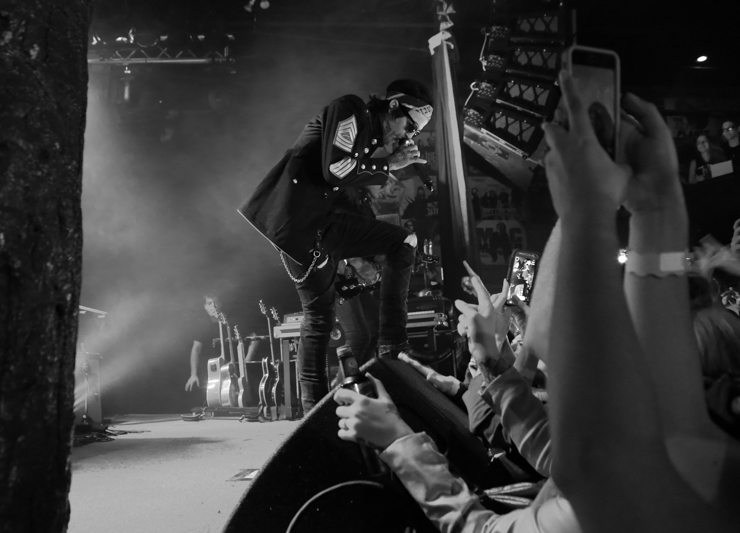 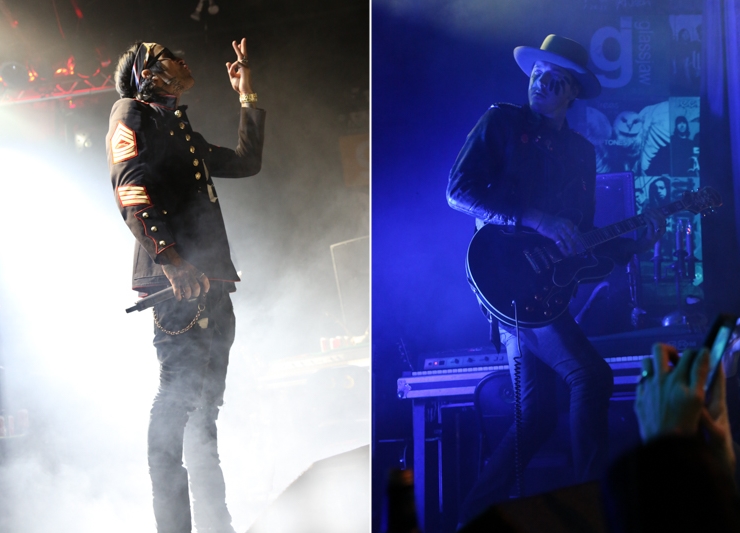 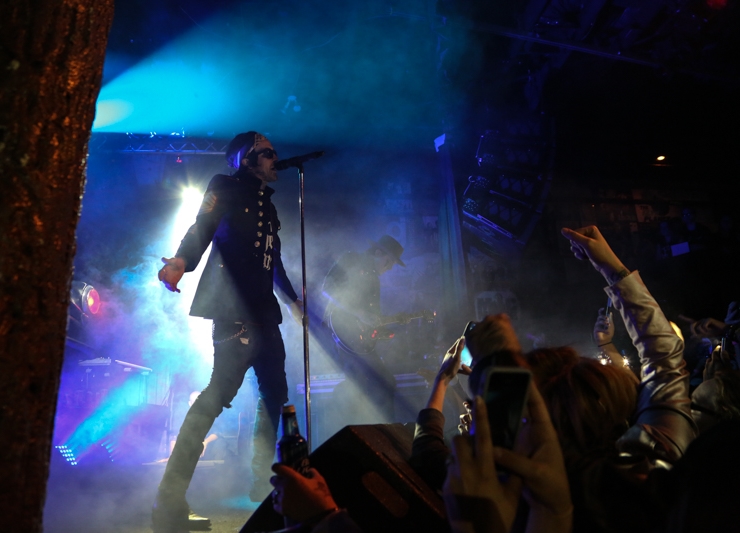 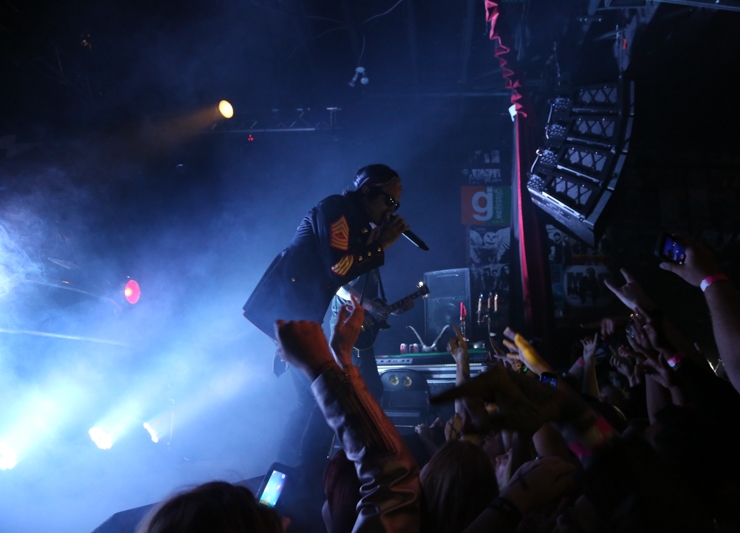 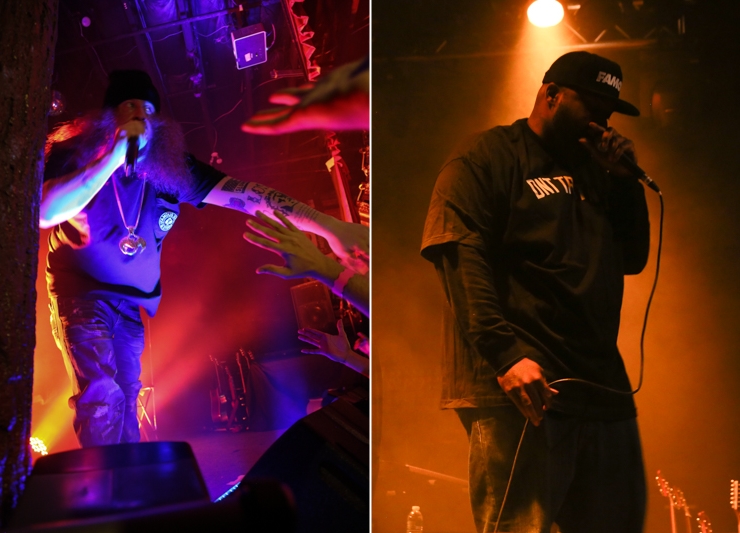 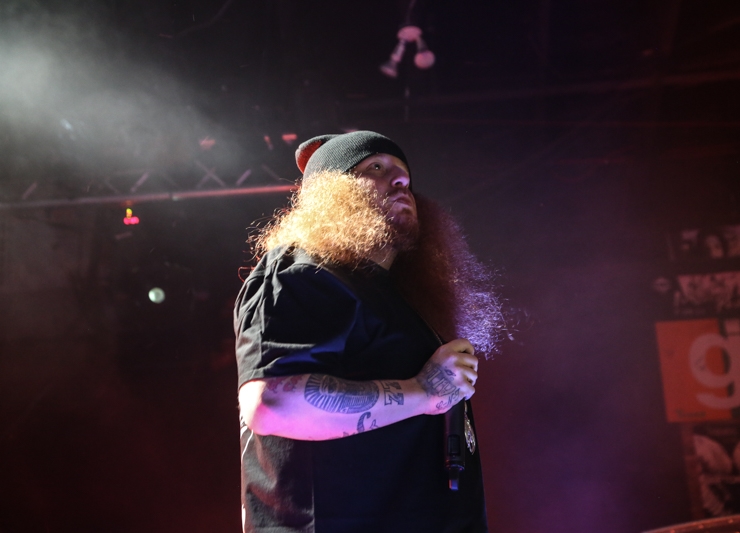 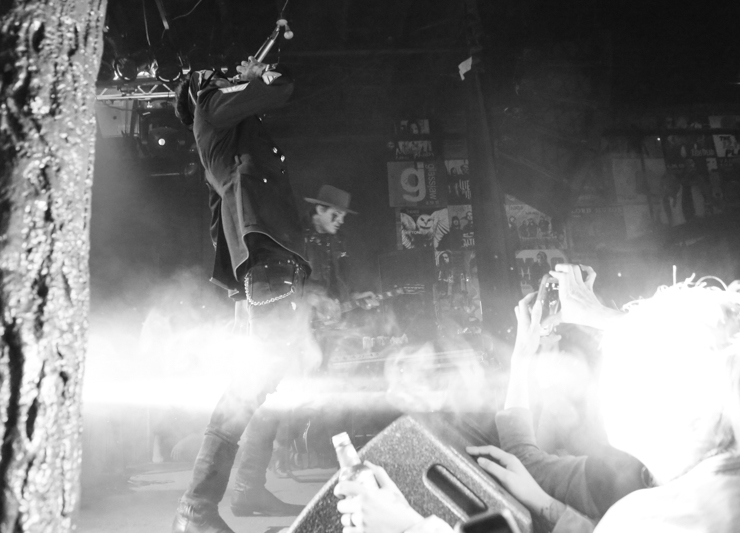 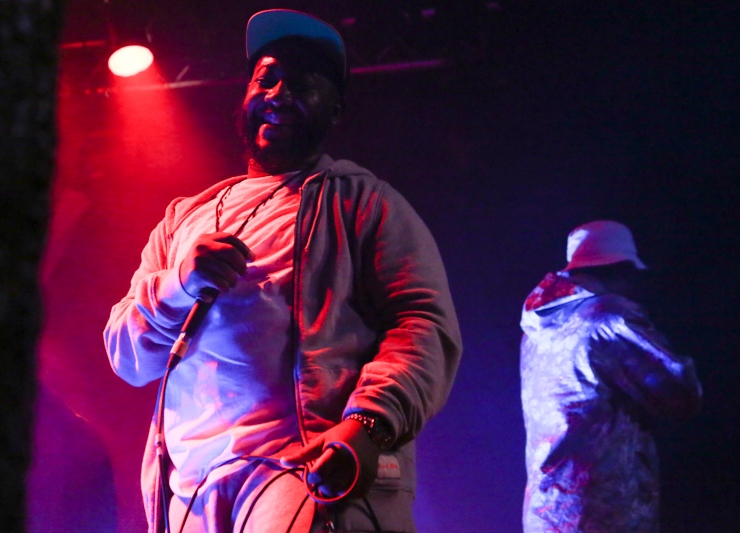 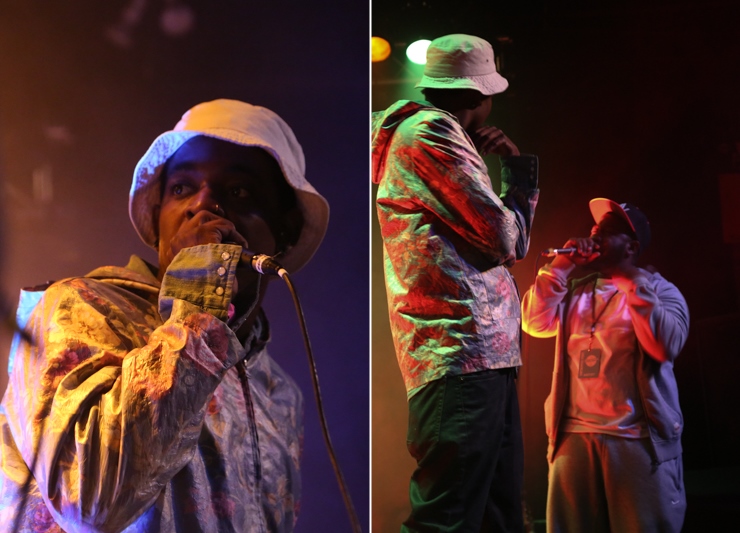