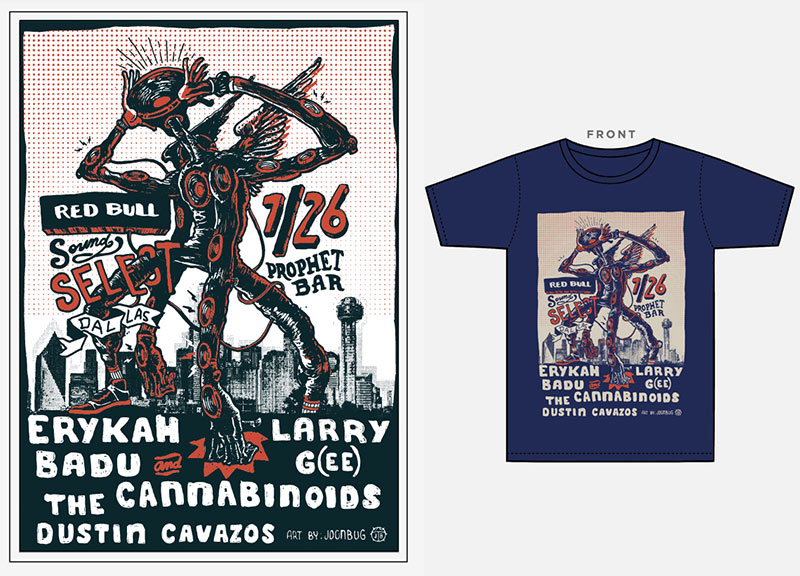 When we introduced the Red Bull Sound Select concept to you back in June, we told you straight up: This new series will indeed feature a headliner at each month's showcase, but the whole idea behind the concept is to give some shine to the city's many lesser-known, up-and-coming talents.

So, yeah, while the idea of a free Erykah Badu show going down tomorrow at the Prophet Bar is indeed exciting, we and our friends at Red Bull and Spune Productions want to make sure you get there in time to see Dustin Cavazos and Larry g(EE), too.

To that end, assuming you followed the process of requesting a ticket and then received an email confirmation noting that your request had been approved, we've lined up a few incentives to make sure that you'll very much want to get to the venue soon as doors open at 8 p.m., if not earlier.

Here's what we've lined up:
• For starters, every single person who walks through the door will be given a two-color, hand-printed, silk-screened poster for the show designed by masterful local artist Joonbug.
• The first 300 people to walk through the door will also received a two-color navy T-shirt featuring the same design. (Sizes are in limited quantities, so be sure you get to the show especially early if you wanna get one in yours.)
• The first 100 people through the door will also get a $15 gift certificate to Good Records, which can be used either at the store or at the store's in-venue pop-up shop, which will feature a selection of albums hand-picked by Dallas Thre3Style champion DJ A1 as must-owns.

In addition to the above, we'll also have a a handful of food trucks on hand, including Easy Slider, Bombay Street Food and Gorgonzilla. not bad for a free show.

Also, since we're on the topic of the Red Bull Sound Select series already, we might as well share with you some just-confirmed details for the showcases going down in the coming months. On Thursday, August 15, we and Spune will be joining forces to curate a bill featuring locals These Machines Are Winning, Ice Eater and Son of Stan, plus touring headliners Baths. Later, on Friday, September 20, we'll be throwing our own solely curated show at Dada, hosting Black Milk's first in-town show since the respected rapper and producer moved to the city. We've also already got some offers out to local openers for that September bill and will let you know soon as those performers have been confirmed for the bill.

Something else to note about the August and September shows, as well as all other Red Bull Sound Select Shows moving forward: Those shows will cost all of $3 to attend, but there will be no pre-sales for them. We'll be charging that cover at the door until the venue fills up — again, in an attempt to make sure the locals on these bills get their due shine.

We're gonna be seeing a lot of each other in the coming months is what I'm saying.