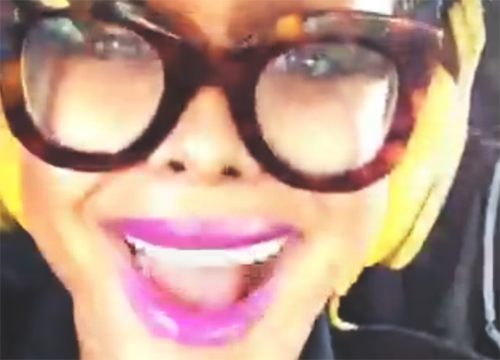 Erykah Badu's been using social media in ground-breaking ways for years at this point.

In 2009, for instance, she became the first person to live-tweet a birth, which she did as she went through labor with her daughter Mars. And, in 2010, she again used Twitter in an interesting way — this time to clear using a sample from Wings' “Arrow Through Me” in the beat for her song “Gone Baby, Don't Be Long”.

Only recently, though, has she started taking her talents to other social networks.

On October 1, you may recall, she used Soundcloud to drop her surprise, and much-lauded, re-imagination of Drake's “Hotline Bling.”

Then, just last night, she took to the still-being-figured-out live-streaming video medium of Periscope to drop the first-ever Periscope music video. The video, which you can watch in full here, goes to Badu's new “PHONEDOWN” single, the second on her still-forthcoming You Cain't Use My Phone mixtape that was originally supposed to drop this week but now appears to be coming some time around Thanksgiving. It finds Badu and members of her inner circle driving around Las Vegas, where Badu's gearing up to tape her hosting portions for the 2015 Soul Train Awards, and driving past a whole slew of thirsty dudes who are inspired at her passing them by to put their phones down and pay attention. (Meet those extras here, in a second Periscope from Badu last night.)

It was kind of a choppy thing to watch live as thousands attempted to stream Badu's efforts at once. A day later, its charms are a little more evident, as replays of the steam show Badu clearly poking a little fun at her own fashion choices and donning three separate hats throughout the clip's fast run. The song, meanwhile, continues along the alluring, updated neo-soul tip her “Hotline Bling” take already teased.

It should be noted, though, that this video isn't quite the world premiere of the track that it's been reported as being. The song's real debut, actually, came when Badu dropped it during her DJ set at The D.O.C.'s Bomb Factory show last month.

Regardless, it still stands as another example of Badu continuing to cleverly push various boundaries. No, it might not be as inventive as, say, producing a music video that's meant to be watched across various simultaneous Snapchat stories. But it's still deserves acclaim for its own inventiveness.