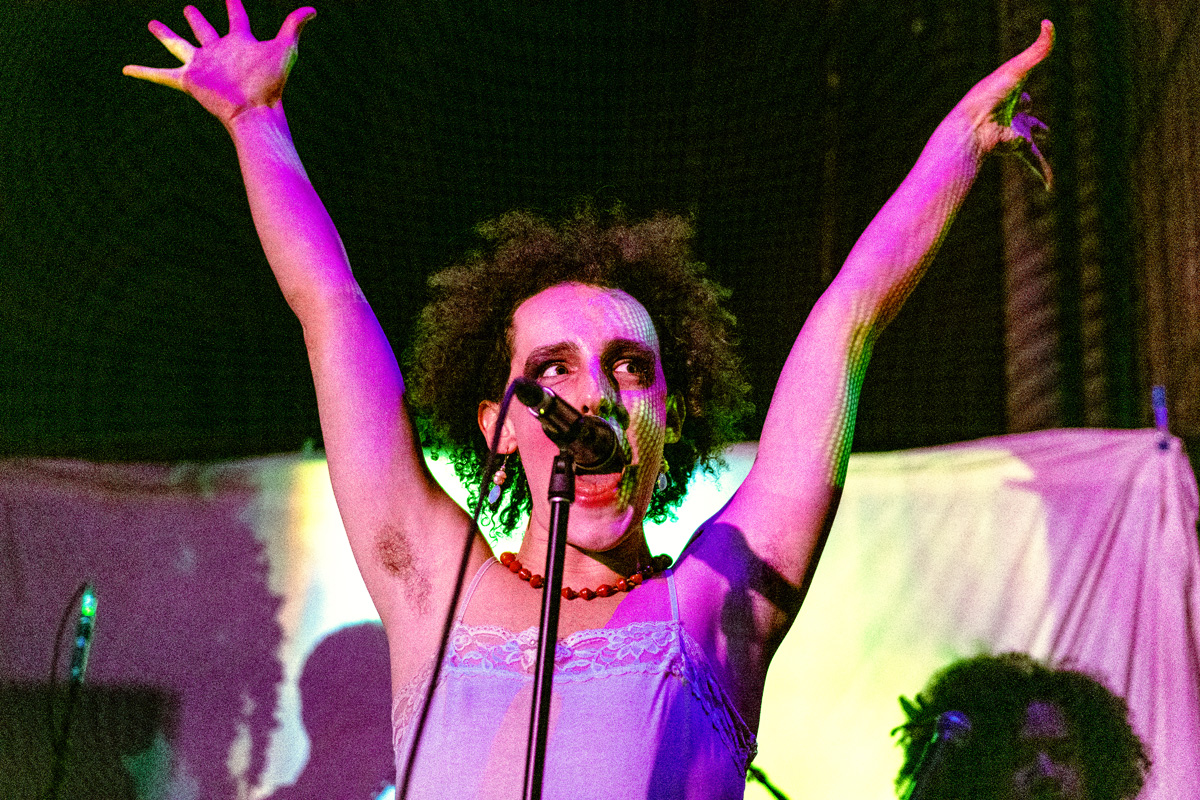 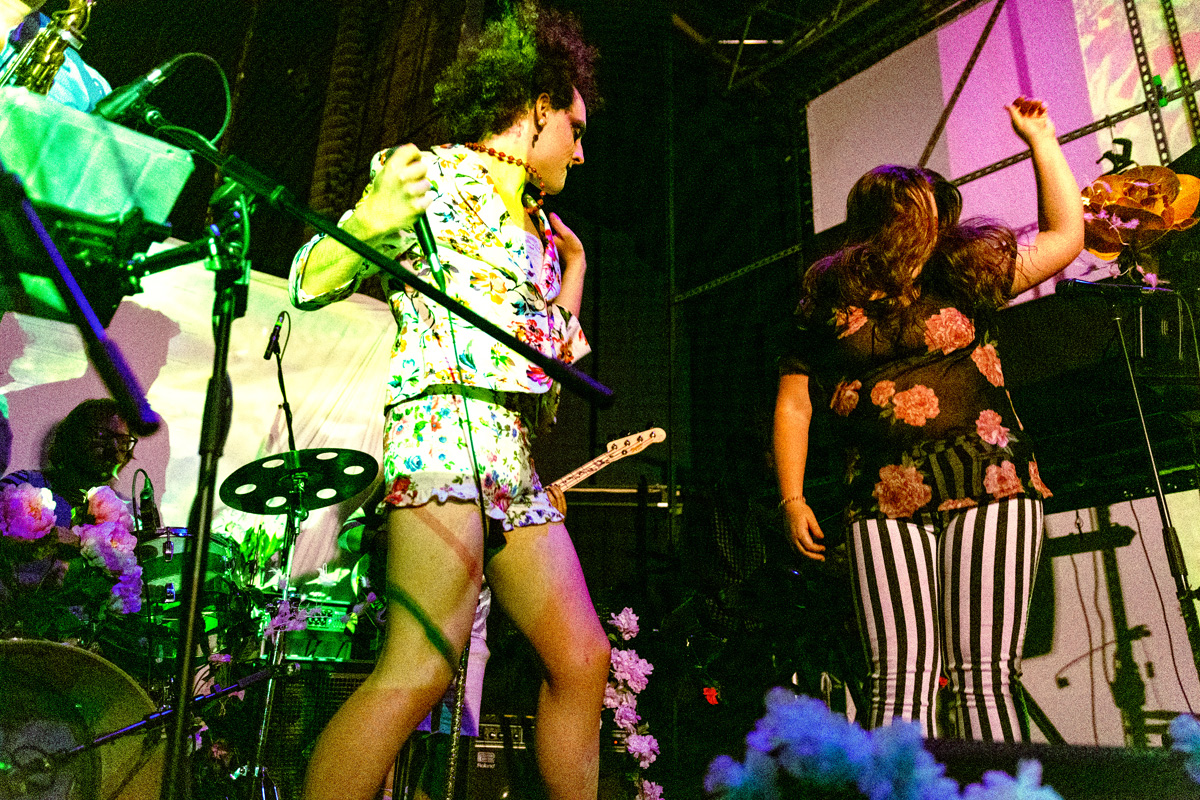 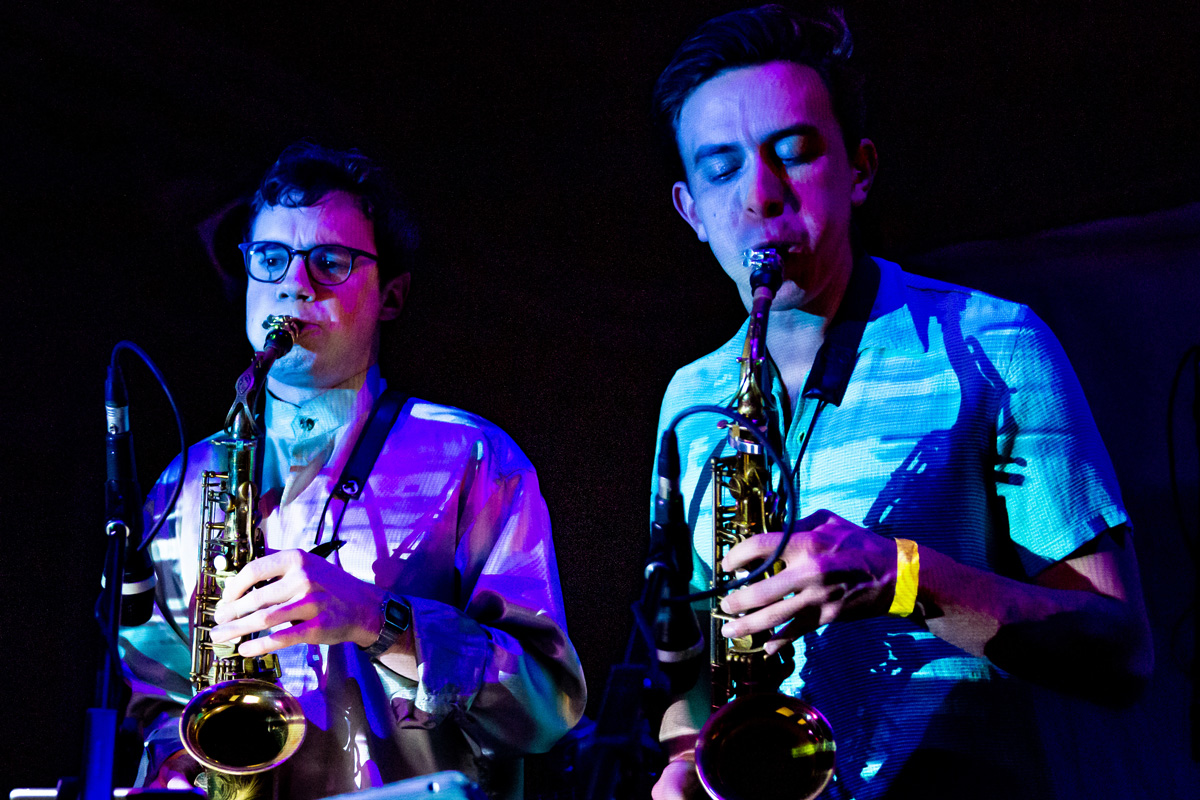 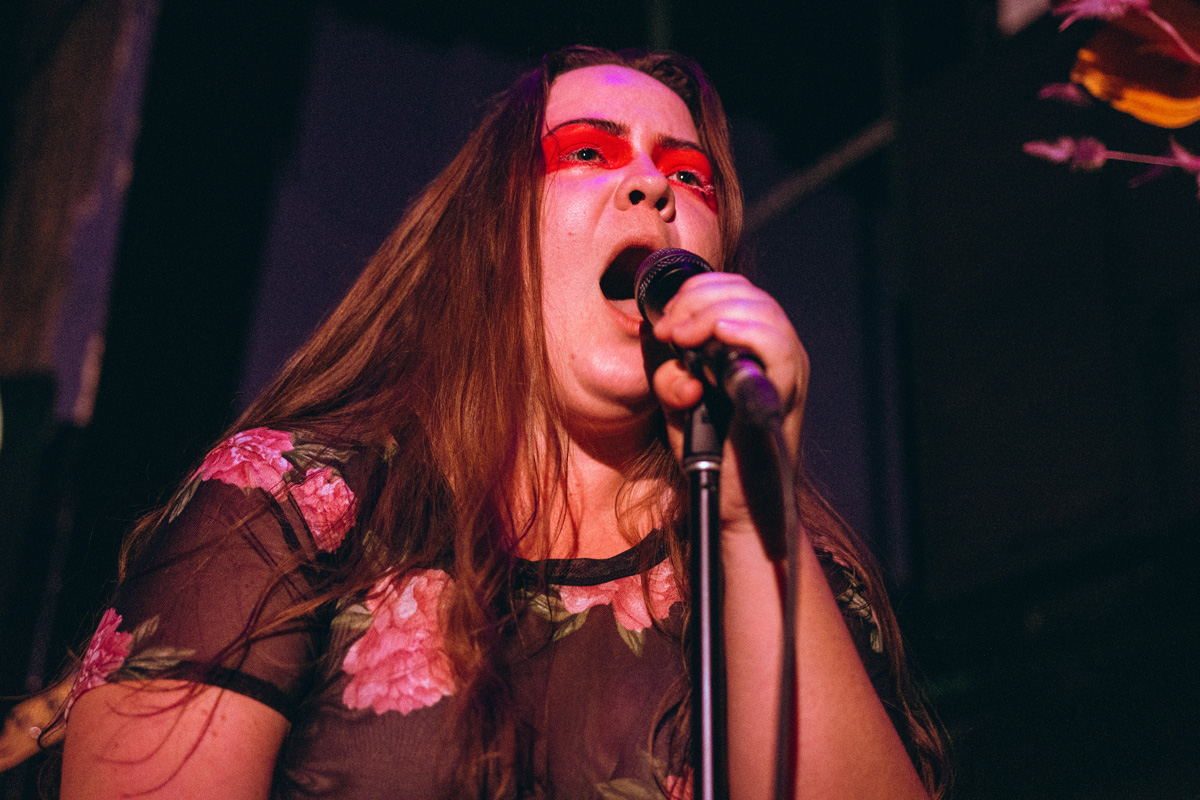 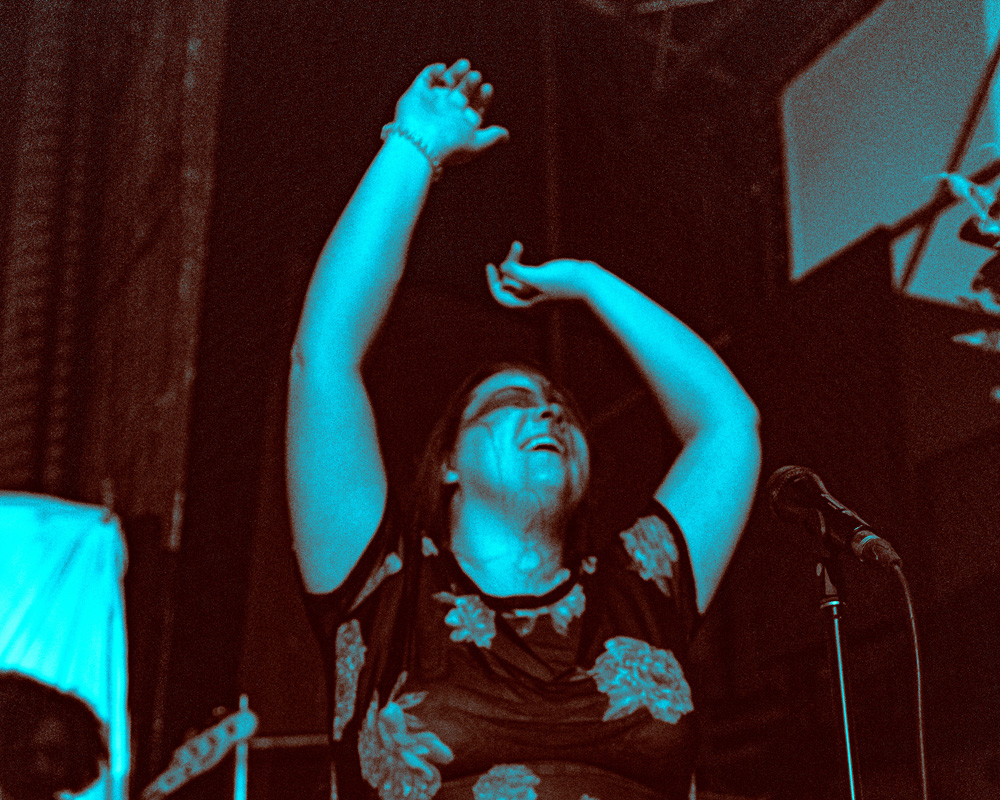 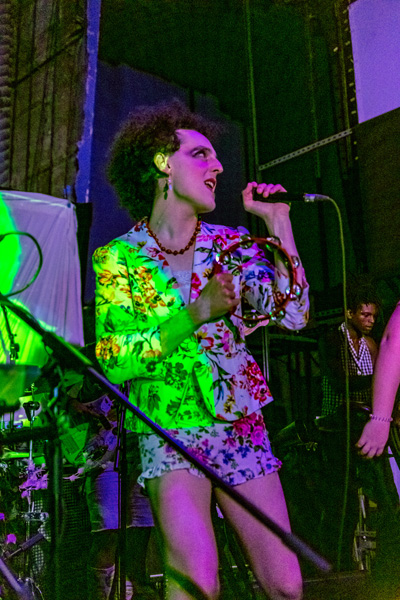 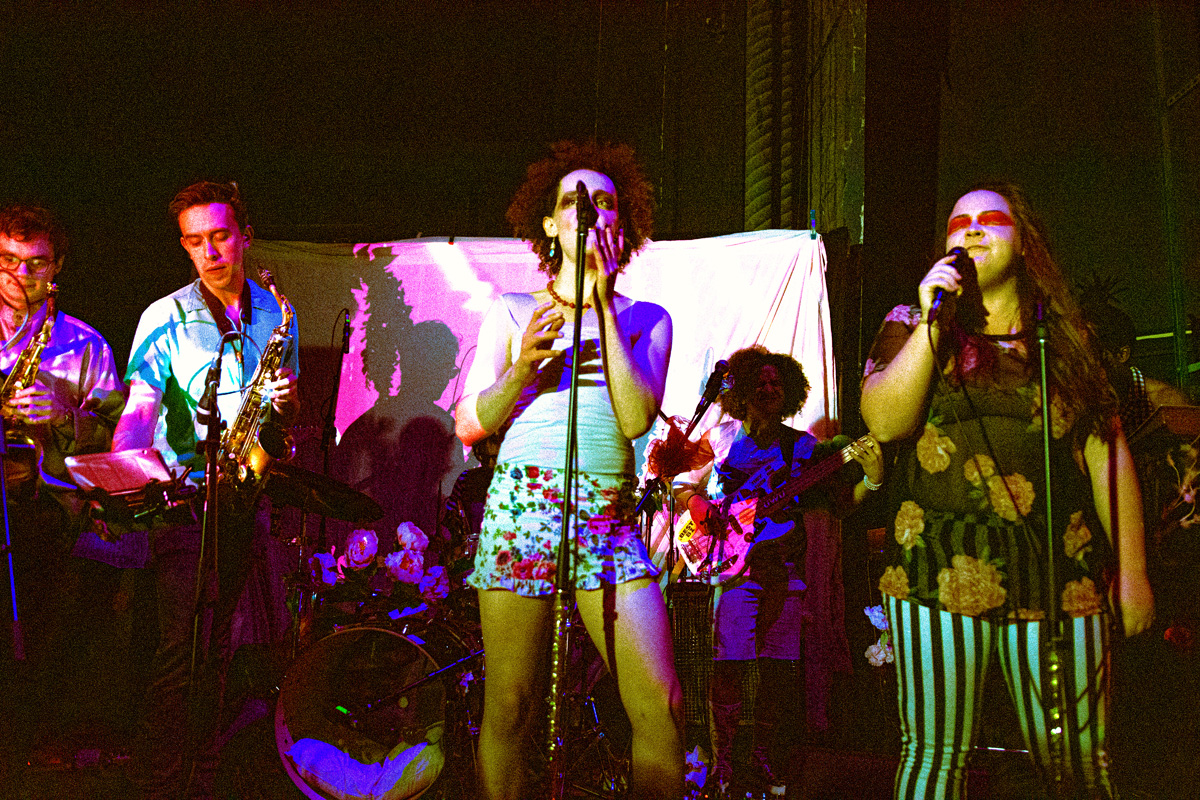 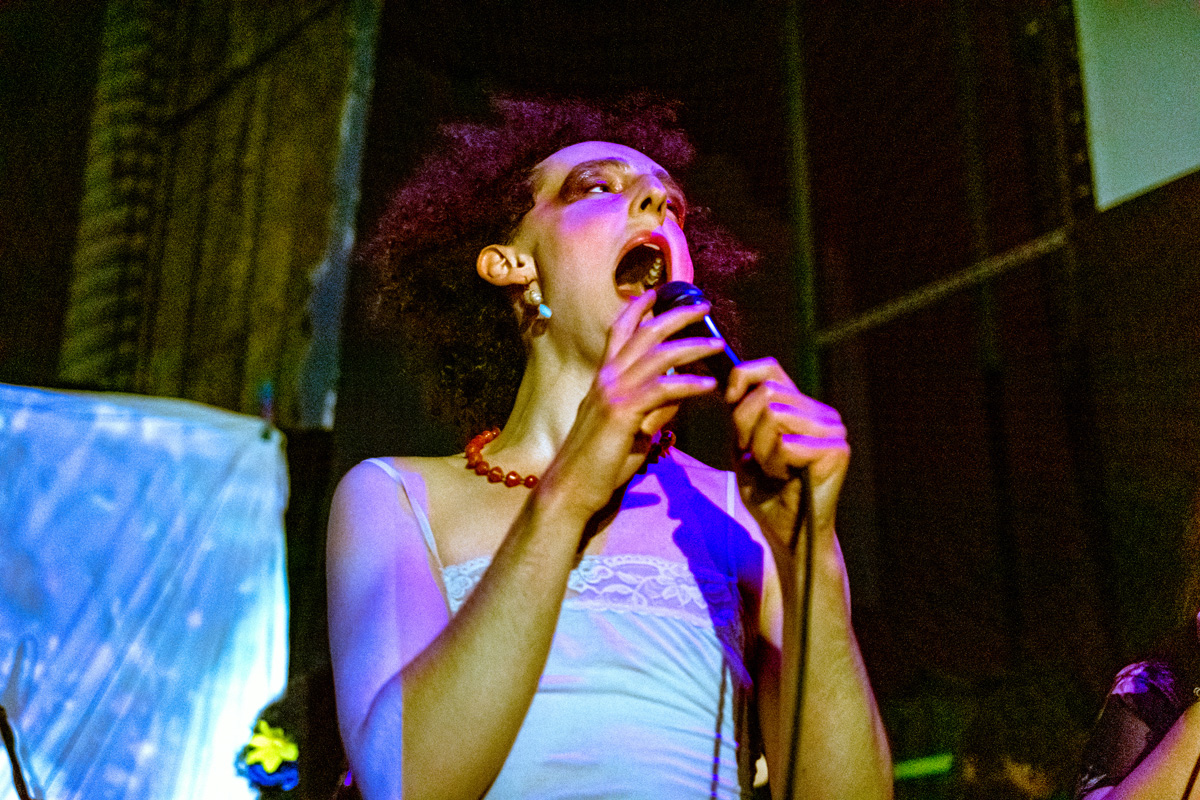 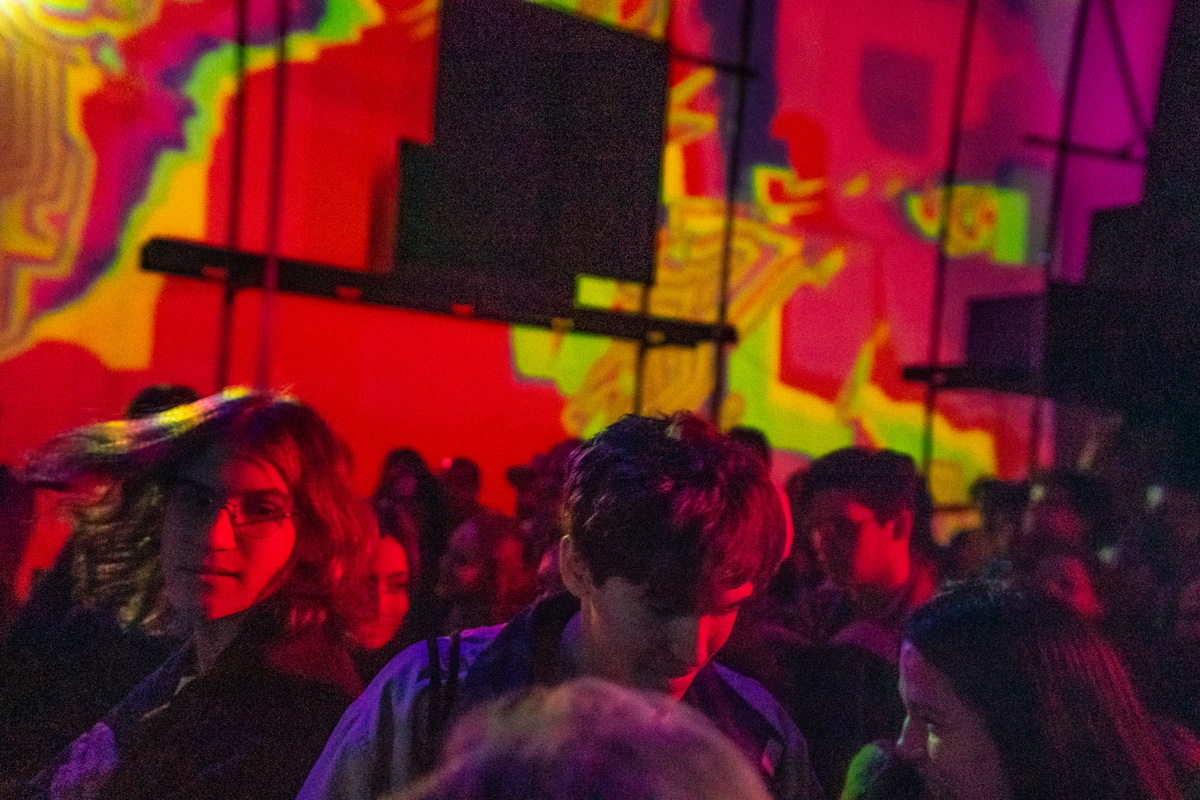 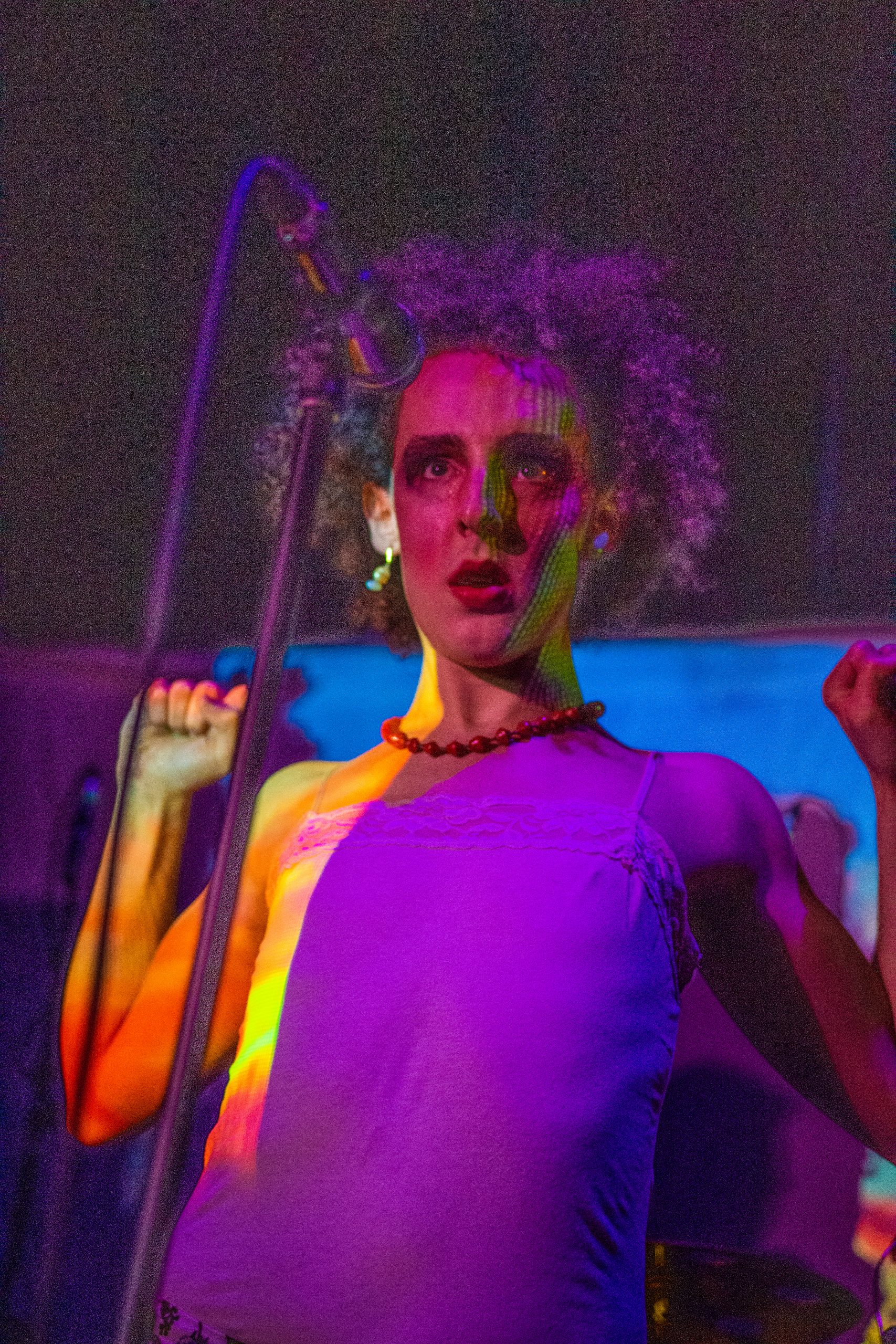 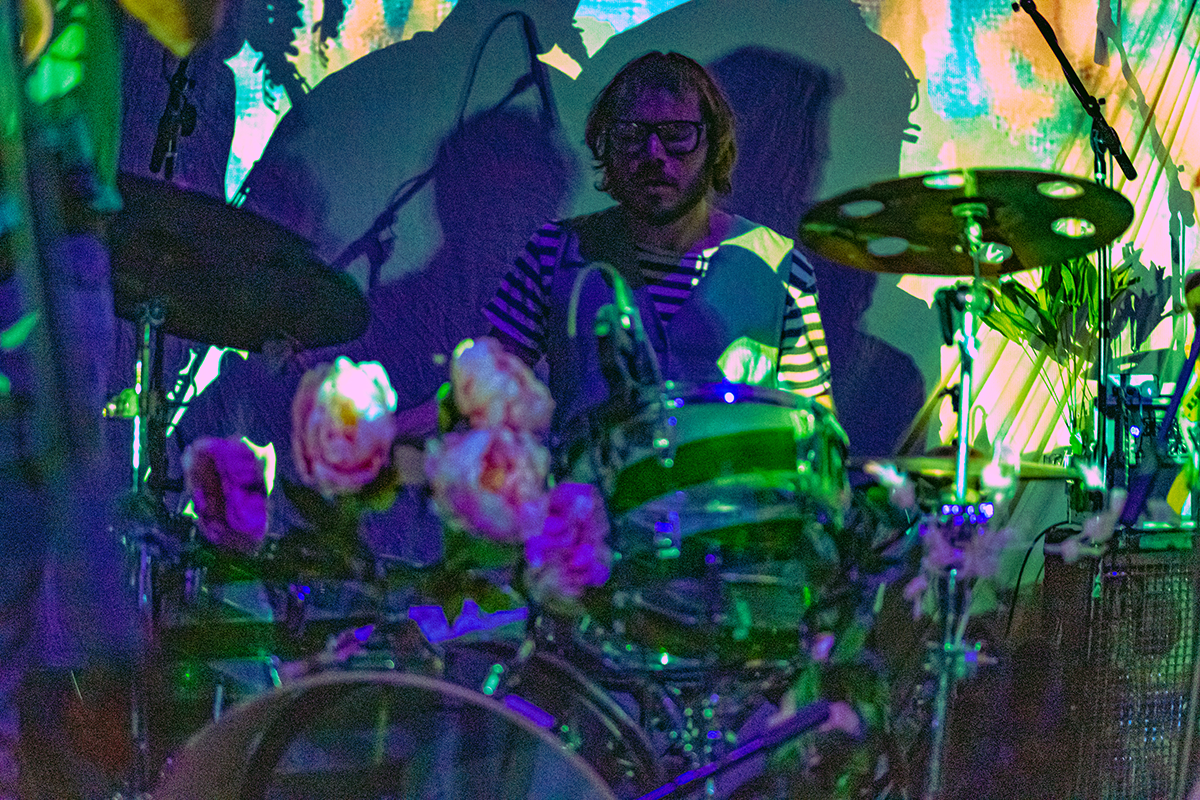 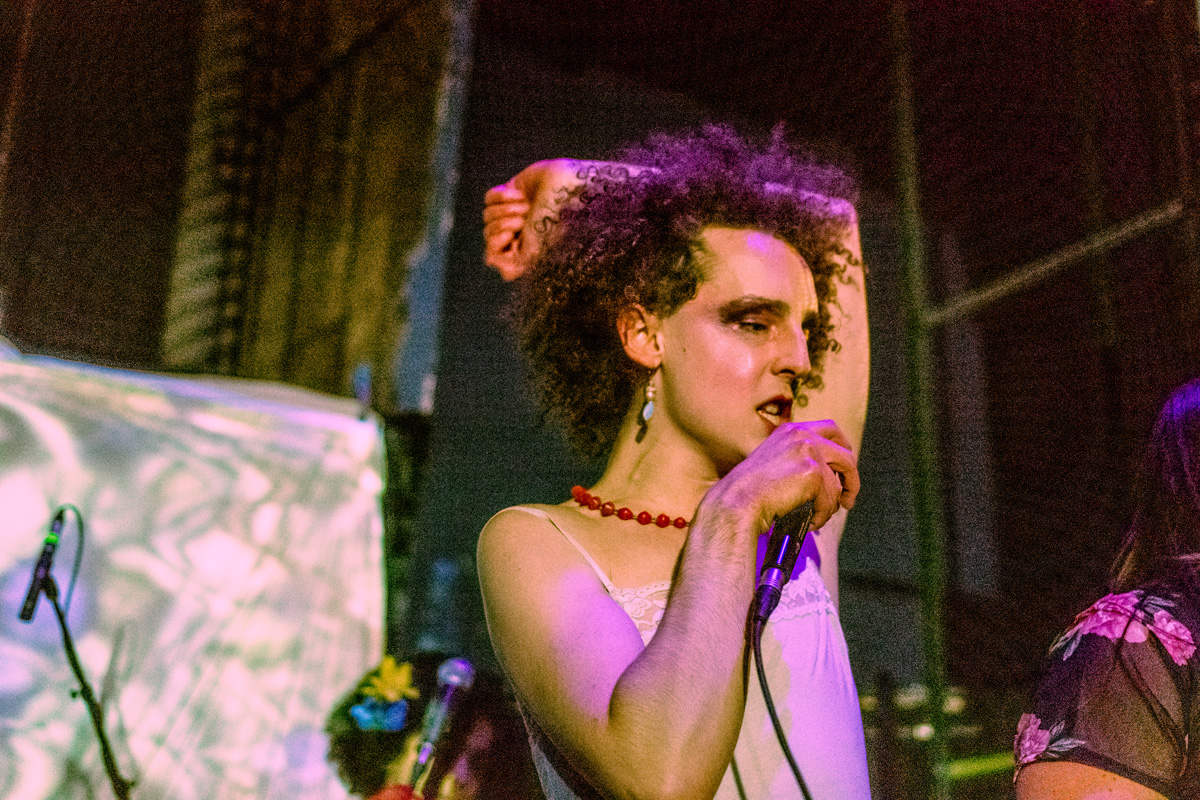 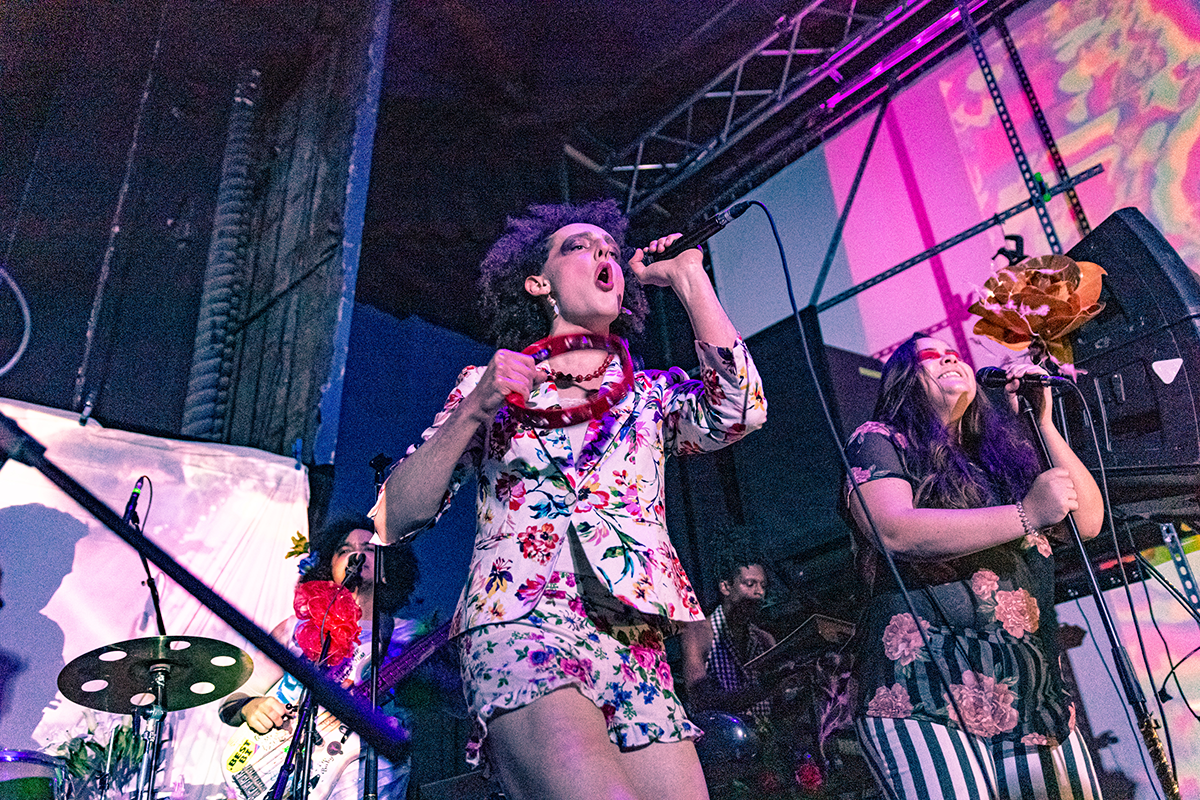 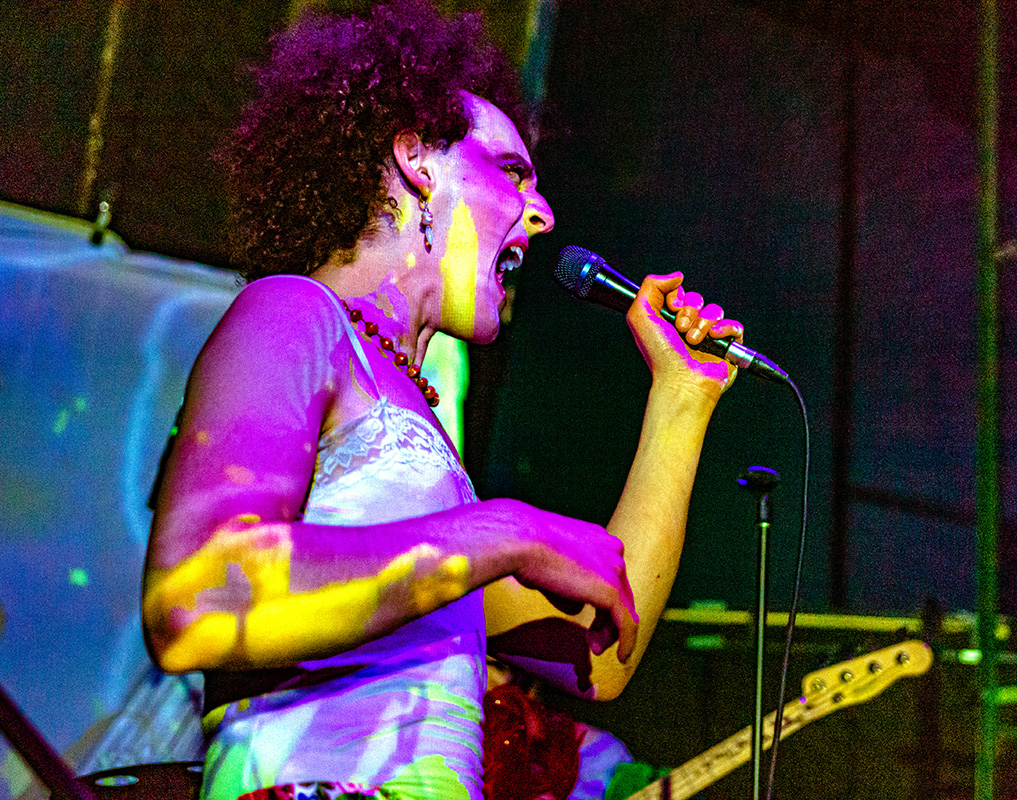 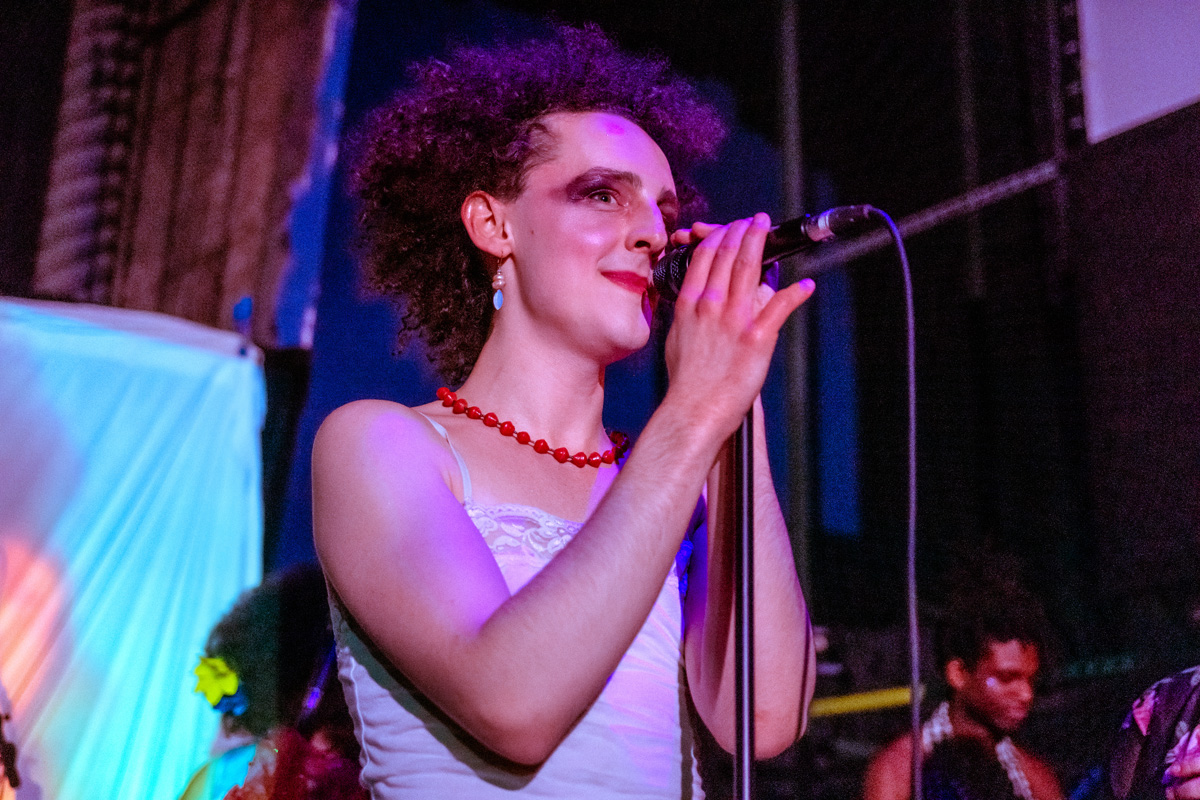 The Stars Aligned At The Texas Theatre For The Vibrant Album Release Show From One Of Dallas’ Most Adventurous Pop Groups.

“This is like a real band playing a real show with real people,” Starfruit leader Ava Boehme told the audience during her band’s record release show Friday night at the Texas Theatre.

As obvious as that statement might sound, Boehme actually undersold the evening’s experience. During this special gig premiering the glam-prog band’s debut LP, Wild West Combat, the nine-person ensemble behind Starfruit was as “real” and authentic to its vision of queer experimental music as it could be.

The first act of the night, Mattie, brought an interdisciplinary approach to art-pop through experimental film projections, samples of scientific presentations and eerie synchronized choreography. Both Mattie and another dance were garbed in curly red wigs and form-fitting suits, in line with her usual adventurous fashion sense. Her ominous, rumbling trip-hop was reminiscent of Swedish songwriter Fever Ray, or perhaps even Solange’s spaciest material. She alternately crooned and wailed trough lyrics that tackle the fluid nature of social and gender identity, a motif that ran through all three sets that night.

Following Mattie came a more conventional, though still lively performance from LLORA, who resurrected the moody synth-pop of acts like Soft Cell and Suicide for an audience who laregly wasn’t even alive when “Tainted Love” dropped. Icy, clattering beats shook the small stage and enticed the audience to dance along.

Before Starfruit took the stage, the video screen displayed a montage of traditionally manly cowboys in old western flicks being shot and killed, soundtracked by a minimal synth version of “Born to Be Wild.” This subversion of the mythos of machismo perfectly set the stage for the art-punk party about to ensue.

The group’s set began with the triumphant and ebullient “Still A Baby,” Boehme’s “own big anthem about gender and sex and stuff.” The band’s three saxophonists, led by Garrett Wingfield, blew their horns as if welcoming the audience into the band’s surreal, boundary-blurring realm.

Order and chaos frantically duked it out during each song, complex written passages giving way to raucous improvisation from each member of the ensemble. Chris Holmes’ frenetic drumming brought to mind the virtuosic rhythms of the late, great Neil Peart from Rush.

A sense of grand theatrics was felt in the band’s stage presence as well. During the gleefully manic “Knife Life,” Ava Boehme kicked both of her shoes off, one landing behind the stage and the other directly in front of me. Her shrieked vocals were fuller-voiced and less shaky than on Wild West Combat, as were the backing vocals of Michelle Mackey.

The atmosphere felt less like a traditional rock show and more like a gathering of family, both blood and chosen — but like a family gathering with mosh pits. In between songs, Boehme told the stories behind the album’s songs and their creation, no matter how frank.

“My parents will like this story,” she joked before describing doing molly right before filming the video for “Metropolis Rock”.

Before the avant-pop mayhem became numbing, the audience’s palate was cleansed through two intimate songs featuring just Boehme and her acoustic guitar. Without the distractions of the full band’s dense arrangements, her lyrical proclamations of resilience stood out.

“I will take all the time I need to be full of nutrition in a state full of rough men,” she sang on the unsparing “Big Arms Truck Driver.” Boehme also spoke of her appreciation for the community, noting “once you get outside of this, it’s a whole different world.”

She isn’t wrong. Dallas remains a dangerous city for LGBTQ individuals, as evidenced by several high-profile assaults on the community within the past year. This disparity between the unashamed environment at the show and the cruelty of larger society made the gig feel quite poignant.

After that acoustic interlude, the front half of the audience was a whirling dervish of moshing kids as it was back to the chaotic art-pop. During one of the final songs of the night, “Chests Full Of Air,” Boehme led the audience in a chant of “God bless us, we bless God, bad be gone, we are stars.” The crowd followed her directions, filling the venue with a joyful noise that was as “real” as it gets.