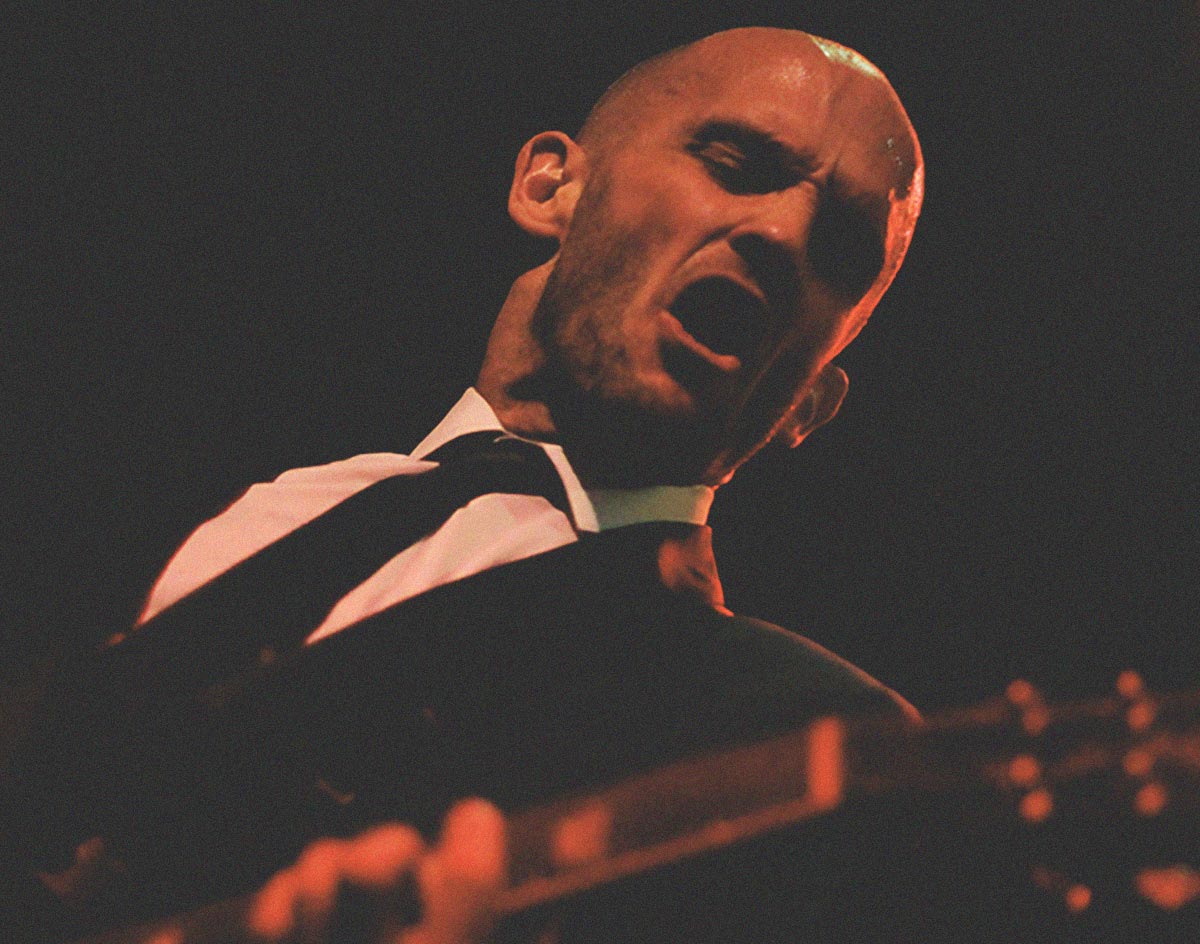 The Hagfish Co-Founder And Current Rise Against Guitarist Busted Out Of Small-Town Living, And Now He’s In A Band The Descendents Are Opening For On Tour.

Rise Against guitarist Zach Blair calls Austin home these days, but he spent most of his life in North Texas. Along with his brother Doni (who currently plays in the Toadies), the brothers Blair were still living near the Oklahoma border in Sherman when they started their beloved rock band Hagfish — a venture that would soon inspire them  to move down to Dallas in the early 1990s.

After three proper LPs with that seminal Deep Ellum scene band and lots of touring — later, he toured for stints in the bands Only Crime and GWAR — Blair landed a sweet gig with Chicago-based punk rock band Rise Against in 2007. At this point, 14 years later, he stands as that group’s longest-tenured guitarist.

With a new Rise Against album called Nowhere Generation officially out for people to hear, Rise Against is currently on a national tour with The Menzingers and even the legendary Descendents opening for them. (More on that later.)

While prepping in Chicago for the band to hit the road — a jaunt that includes a stop at the South Side Ballroom on August 15 — we talked to Blair about how he stayed busy this past year, how his Zach and Mike Make 3 podcast with Riverboat Gamblers frontman (and Blair’s bandmate in Drakulas) Mike Wiebe came to be, what he took from his upbringing in Sherman and how grateful he is for his lengthy career in rock ‘n’ roll.

What were you looking forward to in January of 2020? And how soon did that change?
Well, we were recording our new record in January. The hope was basically what we’re doing now. Everything went on pause for one year for us. We were making a record, and the idea was for it to come out in the fall. We were going to be touring ahead of it — festivals and things like that. And, then, we all know what happened.

The good news is all that really just pushed to now. I was a little surprised by that. I couldn’t believe how perfectly it worked out.

Your podcast with your Drakulas bandmate and Denton-sprung Riverboat Gamblers frontman Mike Wiebe — was that something you had wanted to do for a while? Or did the pandemic force the issue?
Both! It was something I wanted to do, and I had the time.

Let’s face it; I never had the time before. I am restless. [Laughs.] I don’t know what to do with myself. I can’t sit still. I don’t like to sit still. I had done an interview with a guy named Dewey Halpaus. He has a podcast called Peer Pleasure, and I did a few podcasts with my good friend Damian Abraham from the band Fucked Up, who has the amazing Turned Out a Punk podcast. Both of those guys had mentioned I was pretty good at podcasts and I should look into them. I was like, “Ahhh, someday. I’ll look into it.” And then that someday happened.

I pivoted and asked my best friend to do it with me. Mike Wiebe is an untapped source. He’s hysterical. The thing about it is, we were talking on the phone for over an hour a day anyway because we have our band the Drakulas that I love so much. Dewey from Peer Pleasure was with the Sound Talent Network, and he was like, “Man, I think I can pitch this to them.” They do a lot of [shows with] guys in bands, essentially. So I started putting up ideas. It was just trying to come up with a concept. I didn’t want to do guys from bands talking about their career — that’s been done so many times, and I wasn’t going to do anything better.

So we came out with the super vague, loose, “three things” idea. What are three things you are into? We figured it would be a test for us. We kind of pride ourselves on being pop culture nerds. Music, culture, comic books and all that. So we were like, “One of us will know what this person is talking about if they throw us for a loop.” And it’s been great.

I tell ya, I’ve been really thankful for it because it has scratched that itch of giving me something to do with my dumb self. [Laughs.]

I’m curious if you still talk to any of your friends from your Sherman days. Or are those days long behind you?
Yes! Intimately! I still know people from Sherman. My mother still lives there. But it was such a dark place for me. I hated it. I’m glad I hated it because it pushed me to get out. I don’t know if I would have had that impetus to get out if it wasn’t so awful. I knew so many talented people that were just going to stay there. I think my mother would have appreciated that, too. She’s super happy for me and proud of me.

The thing about Sherman is so many people just don’t leave. There’s that allure of small-town life, and knowing where everything is, being comfortable. I just knew as a kid that my story was not going to end here.

My dad was a classic rock DJ, long-haired, biker-looking kind of guy. He didn’t fit in, either. [Doni and I] didn’t fit. They just never had enough money for us to fuckin’ leave! I wanted to move to Dallas so bad.

I totally understand Rise Against has a much bigger audience than the Descendents. But for you, as a punk rock fan, is it weird to have the Descendents open for you?
Oh, dude! It’s so weird! Not just to mention the history with those guys. Starting with the earliest days of Hagfish, all we wanted to do was be the Descendents. We just tried to rip them off. Our slant was, they are dorks who don’t get girls, so we’re going to create these characters — y’know, be cocky, get the girls, wear suits, but we’re still dorks that didn’t get girls. Well, except George [Reagan, vocalist]. He did alright.

Thankfully, they liked our band. We started opening for them when they came through in the early ’90s as All. My history with those guys goes all the way back to that. And then they started producing our records and they took us under their wing. I played with Bill [Stevenson, drummer] in Only Crime with my brother. That bled into Rise Against for me. [Bill] had been producing Rise Against records. I met [Rise Against] on their first tour at the Galaxy [Club]. They kinda asked Bill when they were looking for guitar players if I would work for them. Since he had intimately worked with both bands, it was so intrinsically linked.

Long story, but yes, it’s really odd having those guys go on before us.

I’m currently reading an advance copy of Dan Ozzi’s book, Sellout, and there’s a chapter devoted to Rise Against circa Siren Song of the Counter Culture. I know that’s long before your time in the band, but would you ever want to read a biography on say, Hagfish, GWAR or Rise Against? How do you feel about reading somebody’s summary of something you’ve been a part of?
It’s always surreal, you know what I mean? The fact that this dip-fuck from Sherman is doing anything that anyone would want to write about? Inevitably, a lot of the facts get mixed up and things aren’t 100 percent factual. You can’t exactly go, “Uh, actually it was this.” Because then you become this narcissistic bug or whatever. [Laughs.] It’s a multi-level, 3-D weirdness. But then you have to stop and think, “OK, I’ve kept my head down and just persevered.” I’ve taken hits, and onto the next thing.

Meanwhile, I realize I’m doing something that’s interesting. I didn’t get a fuckin’ law degree, I’m not an accountant. I’m not disparaging those careers; they’re perfectly viable ways to make money. But what I do is something I find interesting. So why wouldn’t other people find it interesting as well? Also, there’s that thing of taking the time to research me and write about me — it’s so flattering. They could be interested in anyone.

There’s a billion people that do what I do. But they’re choosing to write about me. How cool is that?

Cover photo of Zach Blair from a 2012 Hagfish reunion show at Trees by Pete Freedman. Rise Against plays South Side Ballroom with Descendents and The Menzingers on Sunday, August 15. Get your tickets here.