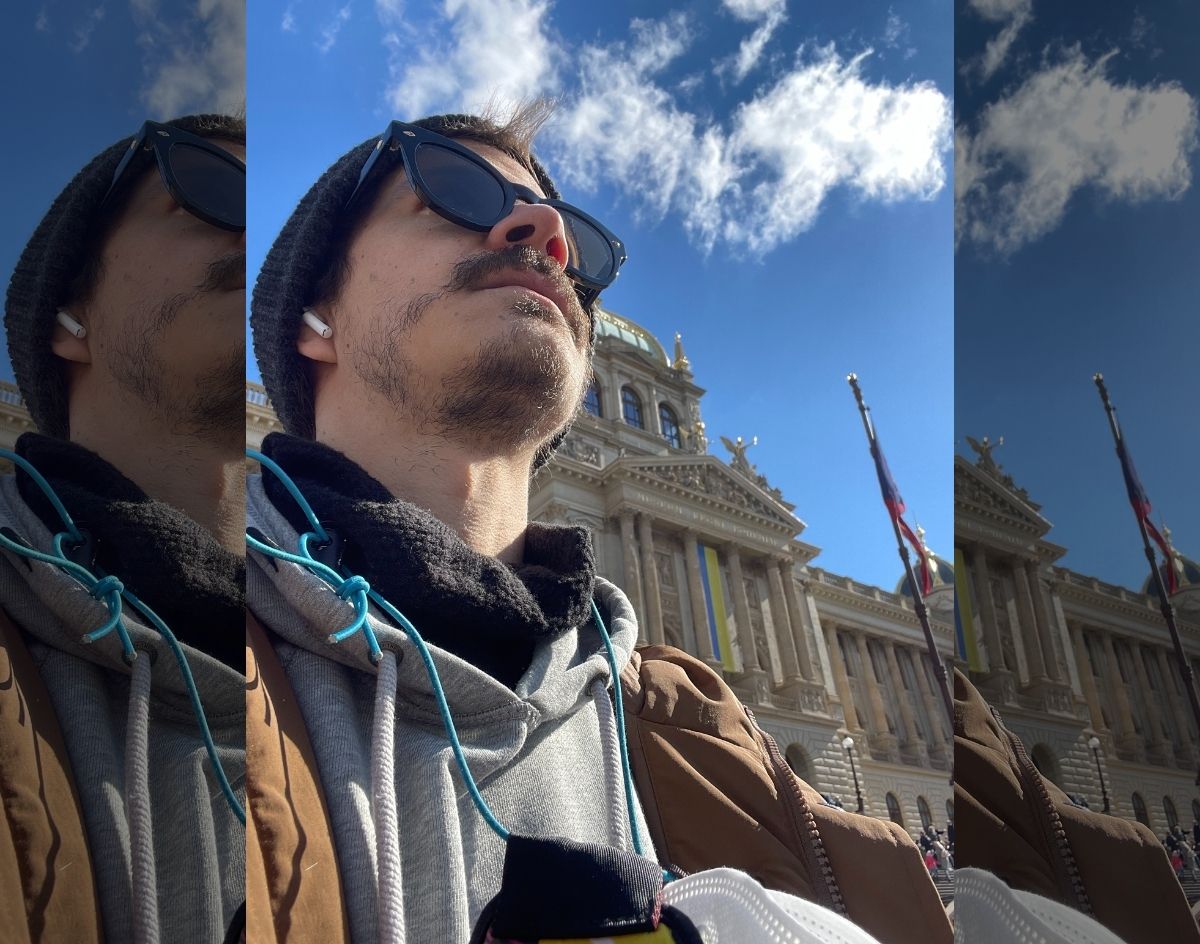 After His Cancer Treatment And An Overseas Move, We Check In With Tera Melos Drummer John Clardy To Talk About His Health And Happiness.

John Clardy spent most of his life in North Texas, growing up in Tarrant County, going to a lot of punk shows, loving the Dallas Stars and spending plenty of time behind a drum kit. Blending Mitch Micthell’s quick licks with the pop-punk he grew up on, he developed a hyper-jazzy style that made people stop and take notice. He went to UNT and played in Fishboy when a golden opportunity came his way: he joined Sacramento-based math rock wizards, Tera Melos.

Three LPs and lots of shows with that band would follow, including 2017’s Trash Generator. Then, things went a little quiet. Clardy played some live solo sets around here, but he kept a low profile and lived in Los Angeles.

Then in the summer of 2020, he announced he had cancer. Earlier in the year, a tumor was found between his heart and esophagus and it was Hodgkin’s Lymphoma. Chemotherapy would follow and the treatments were working. Faced with a huge financial burden, even with health insurance, he asked for help via a GoFundMe campaign. Thinking he could only hit a $7,000 goal, friends, fans, and loved ones raised over a staggering $65,000 for him.

Since his last update in July 2021, Clardy has not spoken publicly or shared any updates, until now. Talking with him via Skype this week, we’re happy to say he is healthy and happy, and now calls Prague, Czech Republic his home. Seeing that smile of his and a very grounded sense of life is an inspiration. We wanted to catch up with him and see how he’s doing.

Why are you living overseas now?

I could have sworn you were still living in Colleyville.

[Laughs] Before I got really sick, I was still living in LA. I had plans to move back to Texas for a little while to work and save up some money and then move to Denmark. [My] relationship ended, but I was still planning on moving back. Then I had a bunch of medical issues I needed to sort out while I was still in LA. I had to come back to Texas, so that’s where I spent most of the next year and a half. Anybody knows of my situation, this country has socialized medicine. [Laughs]

Did you love the life in Prague?

I had been with a girl from central Europe, so in my mind for years, living in Europe was the endgame for me. The exact situation has changed. So when it was time to get out of America, I already had my foot in the door with the language over here. I made a good amount of friends here, between people I met on tour, through my ex, things like that. So I wasn’t coming in full novice.

Let’s get to the bleak shit. Are you in remission?

My oncologist at UT Southwestern has never once used that term. The whole thing I’ve gone through with the big C is nothing like movies or TV. At no point was I set down in a big, fancy office with a doctor with a bunch of books behind him saying, “You have cancer.” And at the end of treatment, I think his exact words were, “As far as I’m concerned, this treatment is done.” [Laughs] It went from there. He’s a very matter-of-fact [person].

I’ve been done with treatment for almost a year and a half. I just had a big blood panel done a week ago and I have a CT scan coming up in a couple of weeks. I have to get my blood checked every three months. I get scans once or twice a year. There’s always some anxiety when one of those is coming up.

The reality is, it can come back. I don’t even want to say “hope for the best.” My experience has been, reject the positive. I think this is an aspect of stoicism, which is to expose a small part of your thinking to the worst-case scenario, or something along those lines, to try to sensitize yourself to it a little bit. If it ends up being the case, it’s not a complete out-of-blue kind of deal.

The morbid nature of it can really push you to make you do something you’ve always wanted to.

Yeah! There were a handful of situations tied to my health situation and not. That definitely played a role. Even in the past two days, on my news app that I use, I see “Mass shooting in New York. Mass shooting in California.” All that stuff. Anytime homesickness creeps in, I look at that. [And] a CT scan isn’t going to cost $1,500 out of pocket. [Laughs]

In general, facing your mortality, I was facing nose-to-nose to it. Not to sound dramatic. I’m not trying to paint a “Pity Me!” kind of picture, but I was right up against it. You do think about what’s important, what I want to do, etcetera. And then it was, “What are you physically able to do?” There are a lot of layers to it.

Are you doing music at all?

I’ve just [started] doing music stuff. I went to a really small show here back in January and it was a friend I’ve known for a long time. It’s a project he has called Fissile. While I was standing there watching them and I started composing drum parts in my head to what they were doing. The last time I went to was in LA, my [Tera Melos] bandmate Nick Reinhart’s Swollen Brain at the Echo right before the pandemic. That part of my brain was working again, fortunately. I talked with my friend and we talked about doing a project together. We rented a space a week later and it was the first time I was playing drums in two years.

I had recorded some stuff back in January 2020 with a friend. I had been playing around on some V-drums since last summer, but it’s taken a long time to get my creative desires back. My head was all static when I was in chemo. I knew I was getting better when I was starting to hear rhythms in my head again.

But my mind was willing way, way before my body was. [Laughs] It took a lot longer to get back into shape physically. That’s one of the good things about being over here, is I do a lot more walking and things like that. Prague has a great public transportation system. There’s no need to have a car over here. That’s helped out a lot.

Do you keep in touch with the Tera Melos guys?

Yeah! Nathan [Latona] has a family back in Switzerland. I don’t get to talk to him as much. But during treatment, Nick and I would talk every two weeks. We text a lot more, FaceTime, or whatever, probably twice a month. Now it’s the same, schedules permitting. We’re both single dudes who have a little bit more free time than Nate does. Those guys are like brothers to me.

I’m hesitant to ask, but I feel the urge by fans to ask if Tera Melos will do another record.

That’s an excellent question. Let’s take my health out of it completely for a second. Even before the pandemic, we had gotten to that point where doing anything was like turning a cruise ship, basically. Now, even with touring coming back, you still ones getting canceled because somebody in the touring party gets COVID. It already took so much to get us in one spot for the amount of time it takes to rehearse, write and play. To get a week into a month-long tour and someone test positive, it would be very bad. I support the brave pioneers that are out trudging through the fledgling thawing of everything.

I definitely hope the answer to that is sometime soon, but I can’t give anyone the answer an aficionado is wanting to hear.

Have you been back to Texas in the last couple of years? Work-wise, what are you doing?

Oh yeah! I was back there in November. I have my trade license to work as a freelancer, which is teaching drums. I just got back into the swing. Fortunately, people are used to doing things online now. I’ve always done it a handful of different ways, like at a school and my practice space when I was in LA.

You are living your best life despite the circumstances.

That’s a good approach to it. Lymphoma is a blood cancer. Getting it in your mid-30s is a bad roll of the genetic dice. It has its own implications. I wouldn’t say any one is worse than the other. I wouldn’t want to minimize somebody else’s reality.

As corny as it sounds, go see the bands while they’re playing or do whatever it is you’ve been thinking about as things are opening up.