[Q&A] How To Laugh At Dallas Sports. 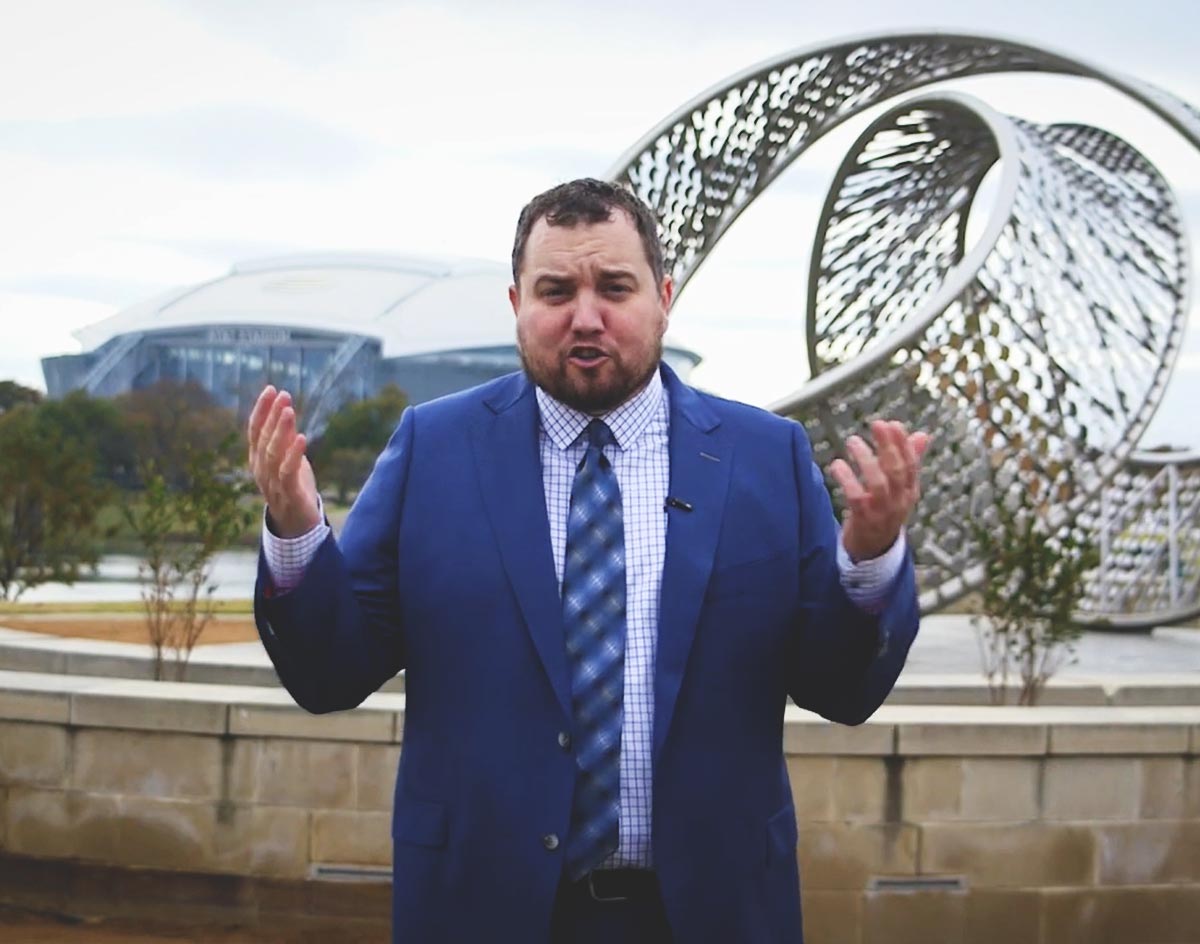 After A Run On YouTube, The Dallas Sports Comedy Show ‘Sports And Such’ Is Making The Leap To TV. The Team Behind It Tells Us What To Expect.

Fans of local sports media may have already heard of Sports and Such, a locally-made sports-focused comedy show that ran on YouTube that ran last year.

Well, to put things in sports terms, it’s now getting called up to the majors. At 2 p.m. on Saturday, September 18, the show’s second season will premiere on a real-deal local television network, CW33.

In advance of Sports and Such‘s big broadcast debut, we caught up with Turner and showrunner Dena Adi (also a past Central Track contributor!) about the show’s migration from YouTube to TV, how it’s changed and what they hope to do if the show takes off past its initial run, which is currently scheduled until December.

Walk me through how this went from a show on YouTube to a show on a terrestrial broadcast TV channel.
Kevin Turner: A lot of connections come into play, but we had it on YouTube and we thought it would be great if we had it on actual TV. We understand younger audiences aren’t watching TV as much. But, for us, with Dena and I being in our early 30s, there is something that feels very cool being on terrestrial TV. Like, to say you have a TV show is pretty cool.

But the way it worked, we were thinking about networks we could go to. I work with Ben Rogers on The Ben & Skin Show. He’s got a really good connection with John Trevino at CW33. When Dena and I were talking about the CW, we were thinking about how much local programming they run. They’ve got a morning show and they do a lot of high school football. Outside of that, though, they’re not known for a lot of local programming. We were kinda like, “We can be their baby!” That was more exciting to us.

Dena Adi: We always had big aspirations for Sports and Such. We did four episodes and threw them on YouTube in the hopes of it eventually becoming a TV show.

I think a lot of people around my age are a little skeptical of YouTubers, but there is a younger generation that grew up on YouTube — and there is no skepticism. But for this older generation, you’re only really legit when you’re on terrestrial broadcasting. How do you all feel about that? Does it feel like a legitimate show now?
Adi: It was always a legitimate show to me. It wasn’t like we were trying to be YouTubers. YouTube was just the platform we chose to broadcast our show. [What we’re doing now is] essentially the exact same show that was on YouTube, just [on] different platforms now. Throwing it on YouTube was to get an audience. It was a useful tool in that regard. We never saw us getting YouTube famous, y’know?

Turner: I don’t think we would have allowed this to happen without a network giving us the freedom to post the show on our website. We can post it digitally, and we want to be a thing everyone can see, no matter what age you are. In the end, I think it’s a show for people in their 20s, 30s, 40s, 50s can enjoy. Let’s just try to get as many outlets as possible.

How I would describe the show’s format is that it’s a stand-up comedy routine with quick cuts that doubles as a sports show. Is that a fair assessment?
Adi: The elevator pitch is it’s a weekly comedy show about sports.

Turner: Dena and I have known each other for years. Dena had a thing called “Work Lunch” that she was doing on her own. She asked me to be a guest, interviewing me about my radio career. Through that conversation, we were going back and forth about all these comedy influences that we’ve had over time. Some of mine are The Soup with Joel McHale, Weekend Update on Saturday Night Live and John Oliver. Dena’s “Work Lunch” thing was influenced by Comedians in Cars Getting Coffee. She’s really into The Daily Show. That was a thing that made us go, “We can probably work together!” — at least I think. I don’t know what she saw in me. I know Dena’s very driven. We both have full-time day jobs. You can’t do this project unless you do it with people who are all-in. We’ve got a good team of people who are all-in.

We have a head writer in LA who used to be on the Kimmel show, Jesse Kubanet. He’s incredible. We’ve got Steve Shackelford, and we call him our ghost writer and our music director. I’ve been doing collaboration projects with Steve for a while now. He’s a guy I will follow in the dark with. Dena’s going to lead us where we’re going. All we have to do is follow her because, a) she works hard and b) she knows what the eff she’s doing. That’s something that helps you go, “Oh, OK, you’re the leadership here.”

We decided that if we’re going to try to do comedy — and none of us are professional, stand-up comedians — let’s write out some good bits and we have good premises. And let’s make sure that we’re not just being people who are taking cheap shots at random people. We want to have a purpose for our show. People are kind of crazy about their sports at times, and we want to step away from why we’re so into this. But also, what are the good reasons we’re so into it?

I’ve been a sports fan for most of my life, but in the past handful of years, I’ve wondered why childish behavior is accepted in sports fandom with adults.
Adi: Sports are fun. It’s an outlet and it’s an escape — and let’s keep it that way.

Without throwing any particular sports radio station under the bus, I have to say that hearing stat after stat after stat just loses my attention after a while. And with the constant talk about the “GOAT” of a sport, it still sounds like a farm animal to me instead of the “Greatest Of All Time.” Can you all understand my pain?
Turner: Oh my god, yeah!

Adi: We understand it, and will probably be a joke about it in the premiere.

Turner: It all makes sense. Sports fans, and the word “fanatic” — we all know what that means, but it’s so absurd. At the of the day, if someone wins a championship, they are still gonna play next year. They’re gonna try again. We’re not making fun of [that]. When Dirk and the Mavs won, we all celebrated that together. It was amazing. It’s some of the best memories that we’ll have. And they also played next year.

We didn’t want to do a full sports show. We wanted to make sure there were some very fun elements. We have a great sports city in DFW, and we’ve got a lot of celebrities that will pop on and play game shows with us, and do interviews with us.

There’s beauty in things that have blemishes. We like sports maybe to a crazy level sometimes. We wanted to make sure that we’re not making fun of that, but also pointing out things.

Sports and Such Premieres on CW33 on Saturday, September 18.