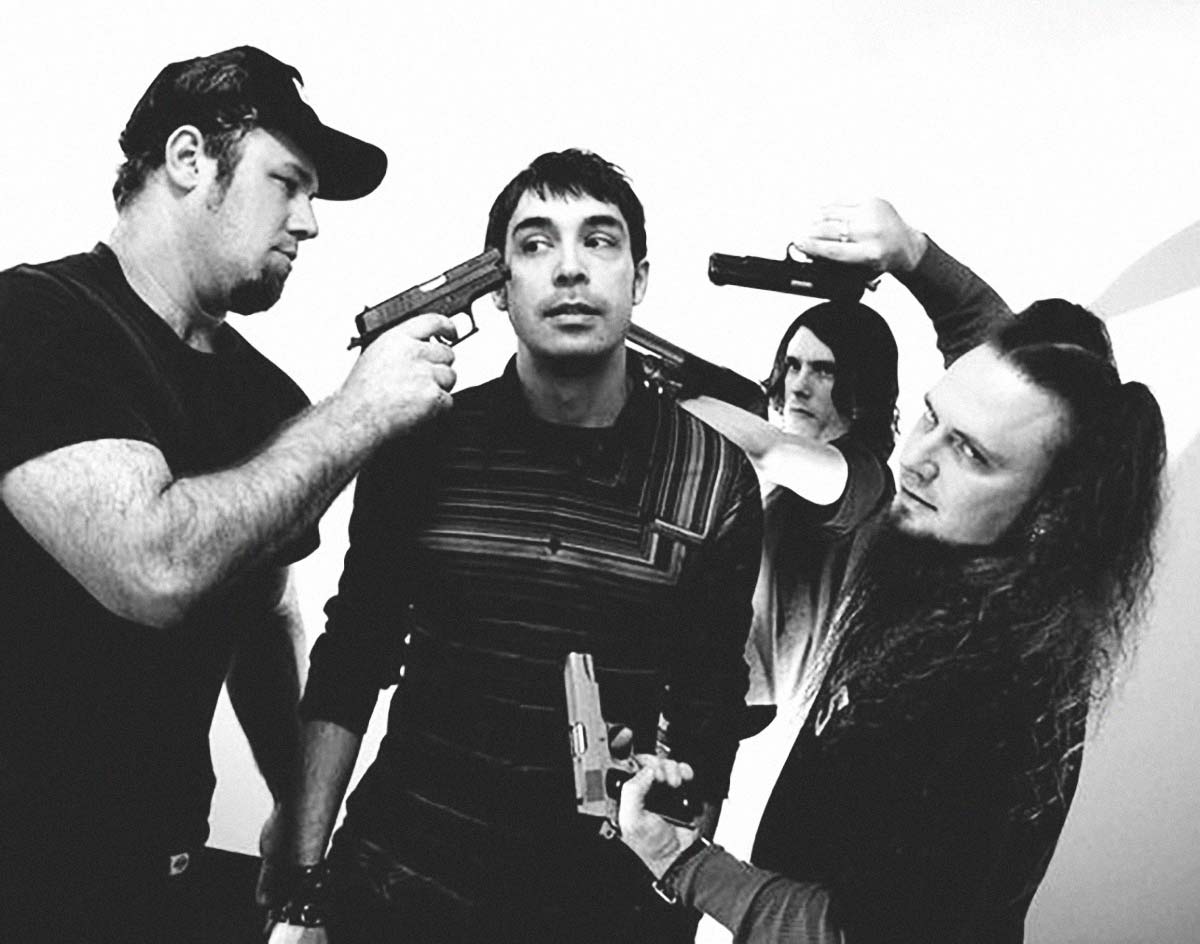 A Whole Slew Of Deep Ellum Bands Missed Out On Both The Initial Vinyl Era And The Medium’s Recent Resurgence — But One Group Is Looking To Fix That.

Were it not for the pandemic, Travis Hill and G.I. Sanders probably never would’ve launched their DFW Legacy Series initiative.

But, a few months into dealing with social distancing and mask mandates, the two friends stumbled upon an objectively fun idea: The longtime band manager Hill and record store owner Sanders thought it’d be cool if their favorite local Dallas bands from the late ’90s — acts that drew big numbers in the Y2K days but missed out on vinyl-pressing opportunities — could have their music put immortalized on wax.

And so they went to work.

Already, their efforts have resulted in revered turn-of-the-millennium-era Dallas albums such as Doosu’s Aqua Vita, Edgewater’s Lifter, Miser’s Colors, The Nixons’ Six and Sanders’ own band SouthFM’s Drama Kids getting the vinyl treatment — with Slow Roosevelt’s Weightless coming out this Friday, April 2.

Beyond an objective that’s clearly more labor of love than cash grab, it’s worth noting that the DFW Legacy Series also donates a portion of its album-sales proceeds go to various local charities. For instance, the upstart effort’s Edgewater reissue raised funds for Journey of Hope, and its upcoming Slow Roosevelt release’s sales will underwrite Foundation 45.

Curious to hear more about these efforts, we recently touched base with Sanders to talk about how the reissue series is going, how it came together and what Dallas music fans can expect from the venture in the future.

When I first heard about the DFW Legacy Series, it was in regards to the reissue of the beloved ’90s Deep Ellum rock band Doosu’s Aqua Vita LP — which is a little fitting. It seems like you guys want to document an era of Dallas music that was both between peak CD distribution and before streaming dominance. I imagine a lot of the great Dallas bands of that era never considered putting out their music on vinyl until now.

Is that description a fair way of talking about what you’re trying to do with the DFW Legacy Series, though?

It is pretty fair. I will preface it by admitting that we are very much making it up as we go. There was nothing established amongst myself and my partners. We had a general sense of some things we wanted to try — but we’d never pressed records before. I’ve been in the music industry — all sides of it. In the last two years, I’ve been on the retail side, launching my own little record store, NTX Vinyl. But when it came to the DFW Legacy Series, that’s really been one step at a time.

We’ve never had any grand vision — like, “Let’s go build a big record label and make a bunch of money!” We knew that was not going to be the case. We knew this was going to be very niche. [Our releases] were all going to be limited edition. And, frankly, that’s the way it has to be — because there’s only so many people who are going to buy a SouthFM vinyl record or a Doosu record or a Slow Ro record.

There’s just not that big of a market for it. And, honestly, that’s totally cool with us — because this is a passion project, through and through.

We kind of felt like, “Man, if we don’t go do this, none of these albums are ever gonna make it to vinyl. It’s just not gonna happen.”

It’s one thing to look back 15 to 25 years on some of these records. But as you get further from that, the energy for it, and the demand for it, is just gonna be nonexistent. So it was this window of opportunity with the vinyl resurgence over the last couple of years. The fact that you can walk into a Target or a Walmart and actually purchase a record again — that’s massive. You couldn’t do that five years ago. The fact that it’s somewhat on the radar again is a great thing. From a timing perspective, that’s what really clinched it for us.

The era of music that we’re primarily dealing with as a starting point, it just felt right to do it now. A lot of what we’re doing, we’re starting with bands that we had personal connections with — either the artist or maybe a single band member or a label or a manager.

We’re starting with the ones that are easy.

When I heard about the reissue of Doosu’s Aqua Vita, my first thought was, “Great, it will be on vinyl and hopefully be remastered!”

Even better: That one got a remix. That’s the best part. That one’s gonna be a whole new experience.

That is music to my ears!

Totally! Because those early mixes, they didn’t get the love they deserved. I’m really excited about that because the band was working on it before we started this. My pitch to [bassist] Chad [DeAtley] and [drummer] Todd [Harwell] was, “Hey, let us help you get this across the finish line.” That was it.

It seems like you’re working toward a proper documentation of a time when Dallas bands were kind of alternative, but kind of metal and kind of hard rock — it’s an era that’s little hard to pin down. Revisiting Slow Roosevelt, as well as Doosu and SouthFM, I’m reminded of a sound that hasn’t been necessarily replicated since.

Absolutely. It’s an era that is undefined. That’s been the hardest part — introducing what we’re doing to people that maybe don’t know the music. Hum was always a band you could point to. With Slow Roosevelt, you could hear the Filter and a little bit of Pantera. There’s not 10 bands you can name that sound like one of [these bands from Dallas from the late ’90s and early ’00s]. We gravitated towards them because they were unique.

What do you remember about Slow Roosevelt at the time of Weightless coming out?

Weightless came out in 2001. Slow Ro had already put out two records. They had an incredible amount of momentum, and it felt like they were poised to explode.

Their first two records came out on the local label One Ton Records, and then they moved over to Brando Records, which was run by the same guys who managed my band, SouthFM. So, we were very close to it. That’s the first time I got to know the band, because I had been watching them for years at Trees and Curtain Club. When “Boys Lie Girls Steal” hit, it was like, “Oh man, someone’s gonna snatch this up and release this record real quick.”

It was just one of many records that I can’t count on my hands and toes that should have blown up out of that late ’90s scene. You had had Tripping Daisy, Toadies, Deep Blue Something and The Nixons. There were a handful of bands that really made the leap — some of them more successful than others, obviously.

For every one of those, though, there’s 20 to 50 other [Dallas] bands that were just as good that didn’t have the right connections, weren’t in the right place at the right time or didn’t have the hook in the single — whatever that may be.

My wife is a longtime fan of Slow Roosevelt. When I told her about the vinyl reissue, she ordered a signed copy within five minutes of finding out about it. I imagine that’s the kind of reaction you’re looking for with the DFW Legacy Series.

The DFW Legacy Series started up six to eight months ago, right at the beginning of the pandemic. The entire thing has been a huge trip down memory lane. I’ve talked to more people in the past six months that I haven’t talked to in 25 years; it’s crazy. There was one moment where I was driving downtown to meet the Slow Ro guys to get them to sign the jackets and, on the way down there, I had a conference call with two of the Doosu guys to talk about their pressing. I got off the phone and I told Pete from Slow Ro, “This is like a time warp!”

Six to eight months ago, this wasn’t even an idea. Travis [Hill] came to me because he managed Miser, the first band [whose re-release] we put out. I had been thinking about expanding NTX Vinyl to a record label. I was just going to do split singles. We just brought those ideas together.

OK, lastly: I’d be remiss to not ask this, and this is such an inside thing, but with the SouthFM reissue, are you going to repress those stickers that said “SouthFM: Zac Crain’s Favorite Band”?

[Laughs.] I will absolutely do a repress of those! I would love to get Zac involved somehow! I still have the copies of the Observer that printed the sticker with the article. It’s been fun going back into the SouthFM vaults — not only physically, but also memory-wise.