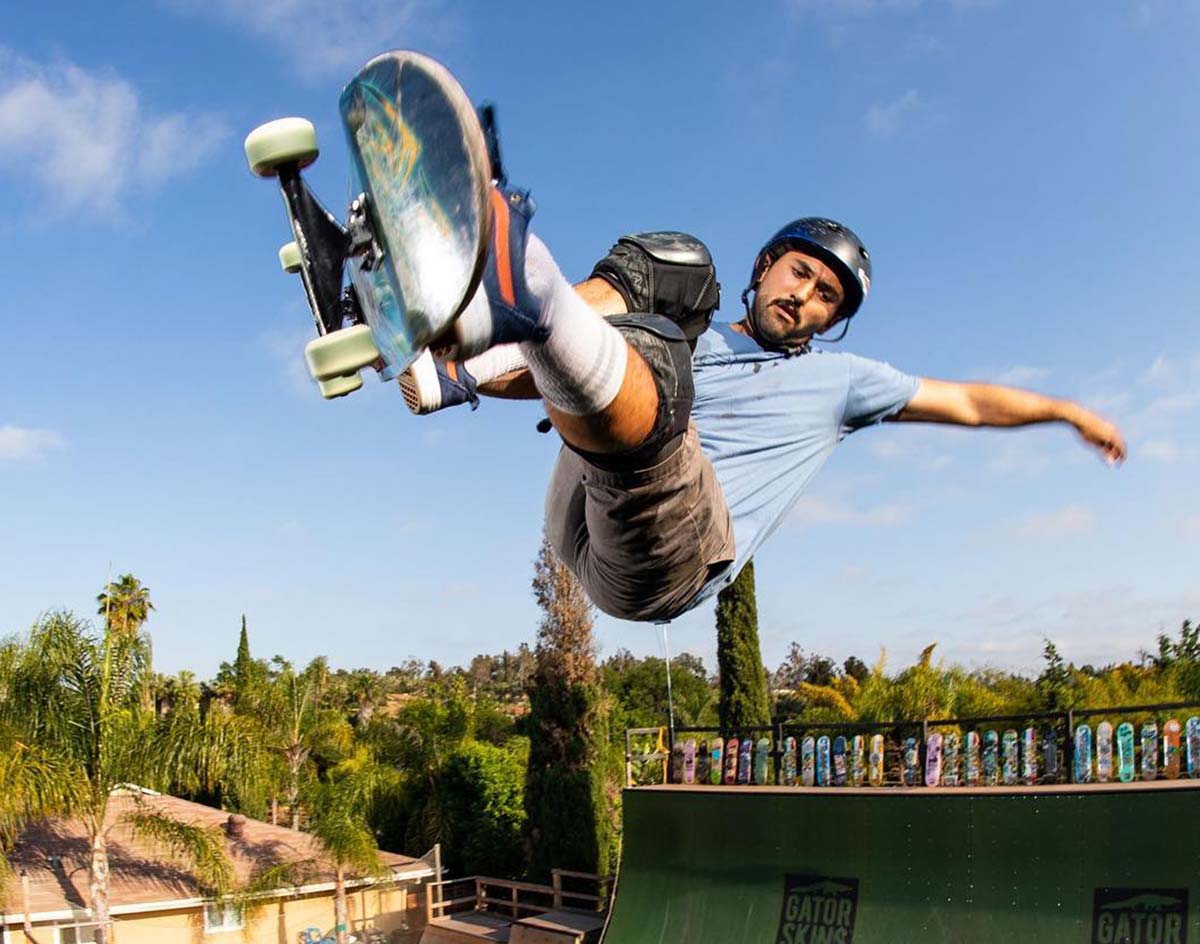 Will Cortez Grew Up In Dallas, Skating With Local Legends. Now He Hopes To Become One Himself With An Olympic Run Honoring His Family’s Mexican Heritage.

On Thursday, May 20, the best skateboarders in the world will flock to Des Moines, Iowa, for the one and only qualifying event on U.S. soil for the inaugural Olympic skateboarding competition that will take place at the Tokyo Olympics later this year.

While Des Moines might at first seem like an unlikely host for such an event, its brand new 88,000-square-foot Lauridsen Skatepark is actually the largest skatepark in the country — surpassing even North Houston Skatepark’s monstrous 78,000 square feet.

Dallas, by comparison, has no public concrete skateparks — well, at the moment, anyway.

Despite this, Dallas has a storied history with the sport. And, right alongside the highest-paid skateboarder in the world (Nyjah Huston), prodigious 12-year-olds (Sky Brown) and troves of others on the official list of invitees, Dallas will be represented in Des Moines at the Dew Tour event, too.

Mixed in with the 80 or so other competitors in the Men’s Park Open Qualifier, you’ll find the 24-year-old Dallas-raised Will Cortez with a (MEX) next to his name. Representing his mother’s Mexican heritage, Cortez has already qualified to be a member of the Mexican national skateboarding team but will use the Des Moines event to attempt to qualify for the actual Olympic competition itself.

With such an important event for his career looming, we recently caught up with the now California-based skater over Zoom for a chat about, among other things, what competing in the Olympics would mean to him.

Before we get started into the Olympics stuff, let’s bang out some bio questions. Who do you skateboard for these days?
I ride for Super 8 Skates, Rhythm Skateshop, Transverse Co. and 187 Pads right now.

Are you considered a pro?
It depends how you classify pro. I don’t have a pro model, but I’m competing in pro contests and doing pretty well against other pros. I say I’m pro because I am in the top 10 percent or so of skateboarders in the world.

Actually, if there’s an estimated 85,000,000 skateboarders in the world, then I think you’re doing better than that! More like the top 1 percent, buddy!
Yeah, I like that. [Laughs.]

So how’d it all start for you? What made you pick up the board to begin with?
I actually didn’t want to skateboard! I was a very sporty person. I played football, soccer, basketball, baseball. My dad put me in everything — even bowling. I would go do all the sports. My aunt actually called me around my cousin’s 13th birthday and asked if I wanted a skateboard — and I told her no. I don’t really like when people buy me stuff sometimes because I feel like I’m wasting their money. It wasn’t that I didn’t really want a skateboard, but I didn’t want her to have to buy it for me. She was like, “Are you sure? I know you’re going to want one because your cousin is getting one.” Eventually she broke me down and I said, “OK.” That’s what set me off. I was about 10 then, and eventually I basically was comatose for skateboarding. Doing big airs was all I could think about doing.

And you’re primarily a vert skater?
Ramps, park and vert. I can skate street; I just don’t care for it as much.

And you teach skateboarding as well, yeah?
Yeah! Sometimes I’ll also do free lesson events. The other day in Dallas, I set up a free day of skating where whoever wants to come can come out and we’ll teach you how to skate. It was a day with like 50 kids or so, and I just taught them in groups for like an hour each. It was super rad, so sometimes I’ll do that just kind of randomly.

Well, you teach lessons, so you’d know for sure. When did you start getting good enough to take this seriously as a career, and getting sponsored and all that? Were you living in Dallas at that time?
I actually lived in El Paso. I got my first sponsor when I was about 12, but it was like a cruddy sponsor. I moved to Dallas when I was 13, and I got an official sponsor — a good one. That was Entropy Skateboards from Oklahoma, and they took real good care of me. That’s when I started really progressing and going to competitions and doing all kinds of fun events and travelling and stuff.

Could you detail that progression a little bit?
The first place in DFW I started skating a lot was Woodward (at the Grapevine Mills Mall). There, I met a fellow vert skater named Chris Wilkinson, and he’s the reason I skate vert. That’s also the reason I am the person I am today. That man is a really good friend of mine, and he helped me progress in skating. Without him, I wouldn’t be this good or have been able to progress in vert skating. He helped a lot. He used to take me to the Plano skatepark, and then when that closed, we waited awhile and skated bowls and stuff. Then, when 4DWN opened, it was like heaven to have a spot where we could skate vert. People would come through and skate that were much better than us like Sam Beckett and Jay Wilkins. So many good guys. I met Mike Crum when I was 14 or 15 and started skating with him. Always skating, skating, skating — all the time. When [4DWN] moved locations and I got older, I began helping out with events and helping out with donations and trying to get the ramps set up and all kinds of good stuff.

So, I and tons of others first met you in Dallas, of course, but you’re on the Mexican national skateboarding team. How did you manage that?
I’m originally from El Paso, but my whole family is from Mexico. I actually had a hard time getting my Mexican citizenship just because it’s a difficult process. But I did get my Mexican citizenship so that I can represent my family that lives in Mexico.

So how does this work now with this event next week. You’re on the Olympic team already or what?
I qualified to be on the Mexican team. I am still trying to compete in the Olympics. [Because of COVID] the date got moved back, but we have been competing this whole time to try and go. There is one more contest left, and it’s the Dew Tour next week. Whoever does well in that will [determine a lot]. It will be a decider with whoever goes to the Olympics. I’m six spots away from going to the Olympics right now, but that could change based on the results of this next contest.

So it all hinges on this one event? Crazy, man! Heading into events like this, are you comfortable going in or are you super nervous?
I’m pretty comfortable going in. It’s all about the course, as well as practice schedule. Some of these guys get way more practice than me because they have more money and can stay there longer and stuff. Some are just extremely talented as well. For me, it’s just adapting to the situation, and it also depends on the course. Some of the courses I like better than others. It can be difficult to adapt when the schedule is so hectic. Sometimes, there’s like six guys in the bowl at once — and everyone is just so hungry to win, and they just don’t care and keep going. So accidents and almost-collisions occur. It’s been really crazy. But I don’t get nervous. The pressure pushes me to do better and try tricks I’ve never done before.

Man, I didn’t realize how fresh this all was when I hit you up wanting to talk to you about your possible trip to the Olympics. I really didn’t know that there was a contest next week that could decide it all.
Right? This contest is for people from all around the world. How the contest works is only the top 20 in the world go. It’s not just guaranteed. I’m already on the Mexican Team — I did that last week. And, two years ago as well, I qualified then.

So you did qualify before they postponed the Olympics and then you had to requalify?
I qualified to be on the Mexican Team, yes. That doesn’t guarantee a spot in the Olympics, though. There are only 20 spots. And each country has a three person max. They can only have three people each, but only 20 can go total. So there are probably 70 or so countries that aren’t going to go. I think a cap of one or two people [per country] would be better, personally. Then more countries could be represented. Right now, though, skateboarding isn’t a part of the Union of the Olympics, and once it is maybe more countries can participate.

I see. How many people are on the Mexican Team?
There are two on the park team. Me and this girl named Veronica. On the street team, there are four. Three guys and one girl.

You mentioned the Olympics Union. So there’s a group working to make skateboarding a part of that?
Yeah. It just depends on how people view it. If it has the same amount of success as snowboarding, and people like it as much, then skateboarding can become a big deal in the eyes of the Olympics. I think that’s what’s going to happen, actually.

How are the Olympic parks looking? I know sometimes when new people start making ramps, it doesn’t exactly turn out ideal. Are they looking worthy of skateboarding?
They’ve all looked pretty good so far! China’s wasn’t that great this season. Brazil wasn’t perfect but still super good. The one in the Olympics, though, is going to be amazing. I can tell you that, for sure.

Wow! So you’re going all around the world with this?
Yeah, I’ve been to China, Brazil and Mexico. There was actually supposed to be more — but, at the moment, not so much.

What has been the best part about the contest so far?
The best moments have been traveling, for sure. I love to do it! Brazil was especially awesome since I started learning Portuguese! A negative, though, is that I have mostly had to pay for a lot of things myself.