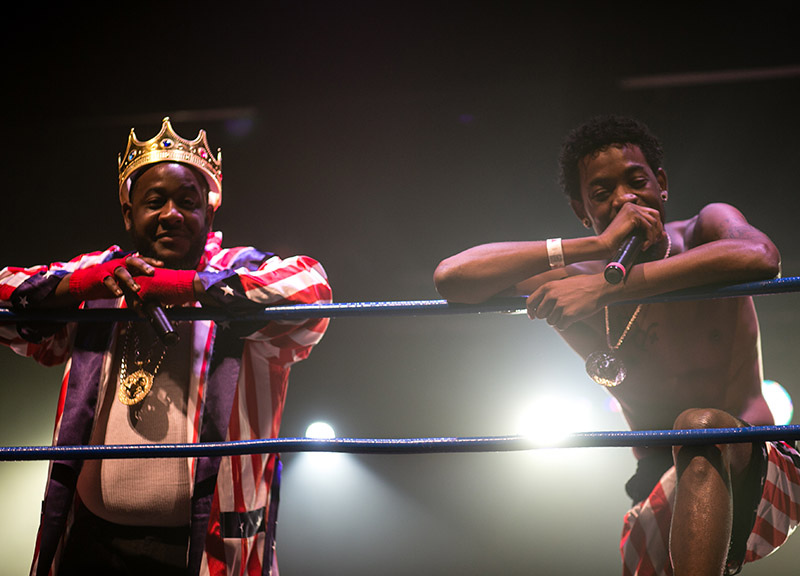 Following open speculation and a public Twitter spat, the revered and acclaimed Dallas rap duo A.Dd+ confirms today to Central Track that their group has officially broken up.

“Shit sucks,” says Paris Pershun via text, further noting that he believes the move to be “one hundred percent” complete, the result of personal issues as well as professional ones. “It’s not just a motherfucka I rap with that I’m losing. Been knowin’ that bro since I was 13. But fuck ’em. For real.”

From the outside, it’s been clear that things have been tense between Paris and his rap partner Slim Gravy for months now. Since first bursting onto the scene with 2009’s Power Of The Tongue, the two have been responsible for some of Dallas’ most exciting music — including the 2011 classic When Pigs Fly, which still stands as arguably the best Dallas hip-hop album of all time, as well as DiveHiFlyLo, its stellar 2013 follow-up — and a slew of borderline iconic live shows. But recent solo aspirations from Slim, as seen through his new GHETTODSKO and Scatterbrained projects, had undoubtedly formed a rift. Only exacerbating matters: Slim recently moved away from Dallas to Austin, worsening already strained communications between the pair.

Issues between the two came to a crest this week on social media as Paris altered his Twitter name to read “Aint no A.Dd+ bihh!!” after calling Slim “a bitch and a liar” in response to claims from Slim that his old collaborator wasn’t supporting his creative endeavors. But tweets initially read in jest were no joke, turns out.

Earlier in the week, A.Dd+ manager Vince Chapa downplayed any A.Dd+ break-up rumors when pressed, noting that the two still have a new, currently-being-mixed album slated for release this spring. That album now appears destined for a posthumous release.

Slim, for his part, isn’t publicly outright addressing the break-up, instead sending out ominous tweets and dismissively referring to Paris’ actions as a “temper tantrum” when asked via text.

Will pigs fly again? Never say never: If LCD Soundsystem and Guns N’ Roses have taught us anything already this year, it’s that music break-ups rarely stick for eternity. Just don’t expect it to happen at any point in the immediate future.