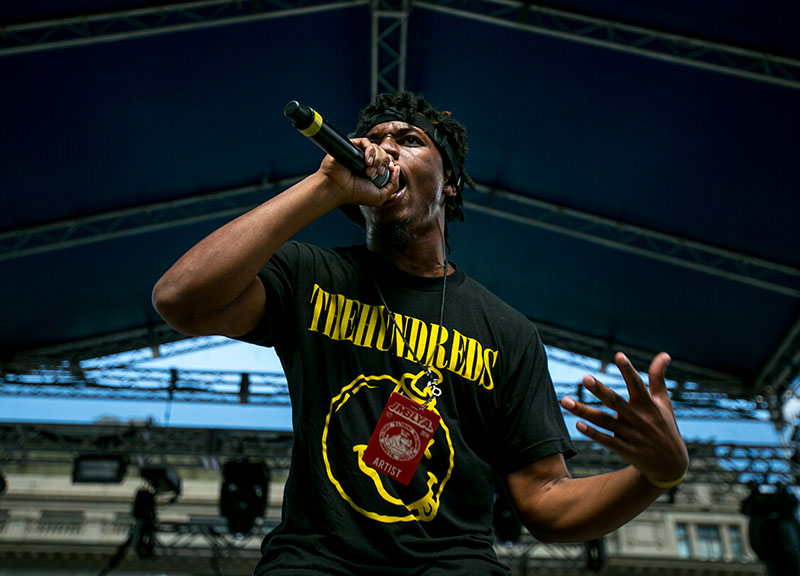 Timing was everything at the Scoremore-presented JMBLYA Fest in Main Street Garden Park on Friday — so much so that, when 9:01 p.m. hit at the Downtown Dallas park, the crowd started to get a little impatient.

The 5,000-person, sold-out audience was spoiled: Headlining performer Chance the Rapper was supposed to start his set at 9 o’clock on the dot, and, though a whopping one-minute delay is normally no big thing, this crowd had been treated to a surprisingly on-time affair all day long.

Still, the impressive nature of running a tight, 10-performer schedule was lost on this crowd. And so the young crowd began a trivial chant for the arrival of Chance the Rapper, requesting that he hurry up and take the stage.

Too much of a good thing is problem after all, it seems.

And not just facetiously: There were a few hiccups throughout the day, perhaps the result of timeliness being so prioritized. But more on those later.

Dustin Cavazos, the only local opener on the bill, performed a two-song set 15 minutes after gates opened at 3 p.m., as most of the early arrivers started to line up around the park and slowly make their way through the entrance.

His set was followed by one of the festival’s best bookings in Denzel Curry. Curry, an 18-year-old rapper from Florida, performed with a fervor and aggression during his own 15-minute set — one that perfectly matched his Three 6 Mafia-influenced sound. It’s a shame, though, that the festival’s early weekday start time meant that Curry’s crowd was much smaller than it should have been — as the case for all the acts on the bill until around 6 p.m.

More than anything, though, this was a testament to how strong the lineup was that Scoremore had put together for the second installment of its festival that blends hip-hop and electronic acts together. No surprise there: Last year’s Odd Future- and Big Boi-topped affair at what was then the Palladium Ballroom too scored with a stacked bill. The major difference, though? Last year’s event went down on a Saturday; this one took place on a Friday.

Still, it worked — for the most part. The first electronic act of the festival, Cashmere Cat, performed a standard set of mixes of tracks from his most recent release, Wedding Bells. While on stage, though, the DJ was reluctant to make eye contact with a crowd that mostly reacted positively to his set . Overall, he just looked dissatisfied with the event’s rather picturesque surroundings — so much so that he’d post a “lol jmblya this is pointless” tweet that he would later delete.

But Cashmere Cat was the only act to express any dissatisfaction with the festival at all. Sure, there existed some slight technical difficulties with microphones that plagued rappers throughout the night, but, on the other hand, there were no pre-set soundchecks, either, as one act bled into another rather seamlessly, with 10-minute breaks in the action only coming here and there.

For the most part, the Main Street Garden Park setting and view brought out the most in the acts who followed Cashmere Cat — and especially so with RiFF RAFF and A$AP Ferg. Each of these two rap acts had performed in town somewhat recently, but neither did so with as much energy as they showed off on Friday.

Despite the numerous delays to his still-upcoming debut NEON iCON LP, RiFF RAFF was adamant that his album was still “coming soon” to the crowd during his set. He performed an upcoming track from the album featuring Wiz Khalifa while lurking around the stage and being followed by huge cutouts of his would-be album cover and own face. He was remarkably animated as he did so, too, even if his set too heavily relied upon backing vocal tracks that afforded him the chance to pose frequently for the many on-site cameras.

Ferg similarly outdid himself this time around. During only his second song, “Dump Dump,” he hopped off the stage to perform at the security barrier, then dove into a crowd that, rather unfortunately, couldn’t hold him.

The DJs on the bill too scored best when their energy levels were high. That’s what the crowd wanted — and it was where where Griz, Baauer and RL Grime cashed in. Their trap-heavy sets found the audiences fully engaged. On the other hand, Purity Ring’s lower-tempo set left the crowd mostly milling about.

Then — finally, and all of one minute late — Chance The Rapper came to the stage, answering his crowd’s chants. With such a strong following at his side, it’s hard to remember that’s it’s only been a year since the 21-year-old Chicago rapper skyrocketed to the cream of hip-hop crop with the release of his Acid Rap tape last April. Since then, he’s earned the acclaim of the press, sold out shows across the nation, and played Coachella with Justin Bieber by his side. He truly seems grateful for it all, too.

And the JMBLYA crowd was grateful to have him on stage. The rapper made headline news last month when he was hospitalized with a 104-degree fever and throat inflammation. He had to cancel numerous shows as a result of that spell, but JMBLYA marked his return to the stage. And, numerous times during his set, he pointed out the love he felt from the crowd.

In turn, he gave them a strong showing. Part of what makes Chance such a unique performer — aside from his catchy ad libs — is his incorporation of the footwork sound into tracks such as “Good Ass Intro” and his incorporation of footwork dancing into his onstage act. Last week, DJ Rashad, who helped pioneer the footwork sound,, died at the age 34, only months after touring with Chance The Rapper’s Social Experiment Tour. On an LCD screen set up on the stage, Chance subtly honored his friend’s passing by displaying the Teklife logo — a footwork collective founded by DJ Rashad. From there, his set set mostly pulled from Acid Rap and his first release, 10 Day, although Chance also managed to mix in newer tracks, too, such as his remix of James Blake’s “Life Round Here” and his peculiar rendition of the theme song from the PBS program, Arthur. It was a tight set, and it hit all of his highlights. But it still felt incomplete, wrapping up in 50 minutes.

Timing was the clear culprit there. Because of sound ordinances in Downtown Dallas, Chance couldn’t perform any later than that; the fest had to end at 10 p.m.

Still, it was a strong showing — both from Chance and from JMBLYA as a whole.

This affair is, put simply, an ambitious endeavor. And though it had its issues — too many acts who’d played town too recently and the time constraints chief among them — the fantastic setting in Main Street Garden Park made up for a lot of those.

And the crowd? Well, the young audience seemed to enjoy the whole thing. 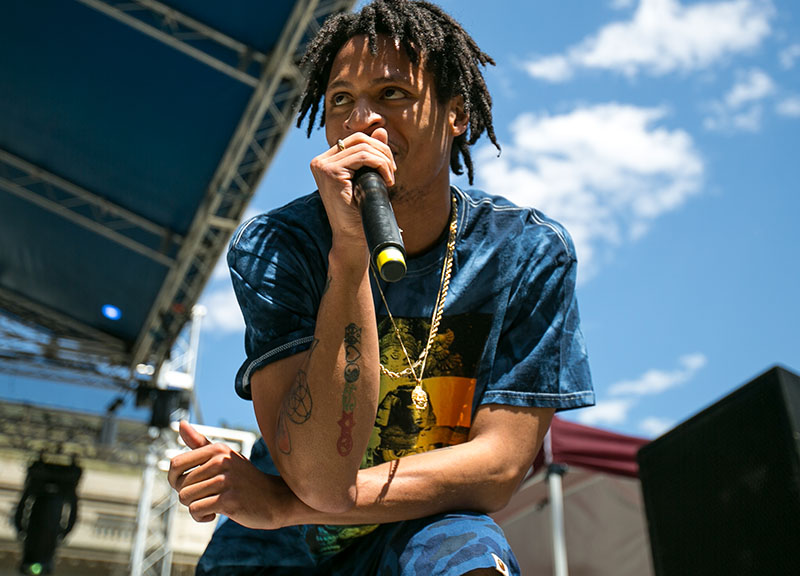 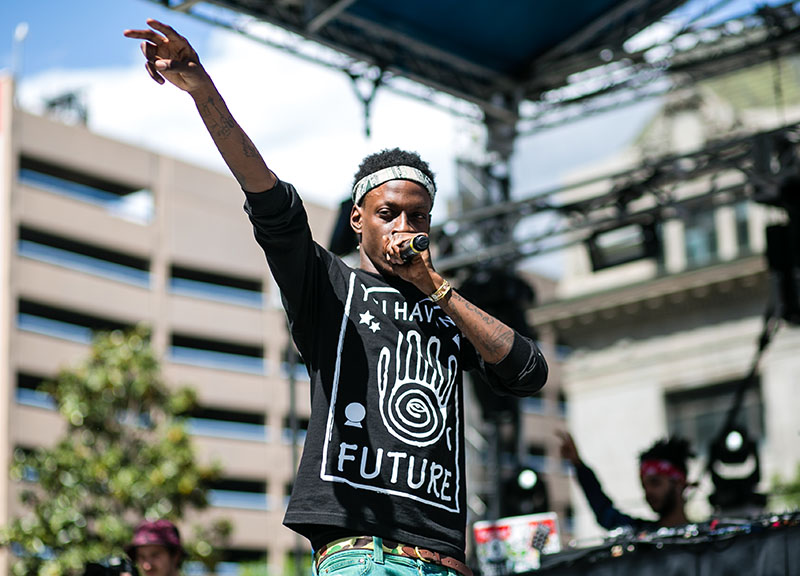 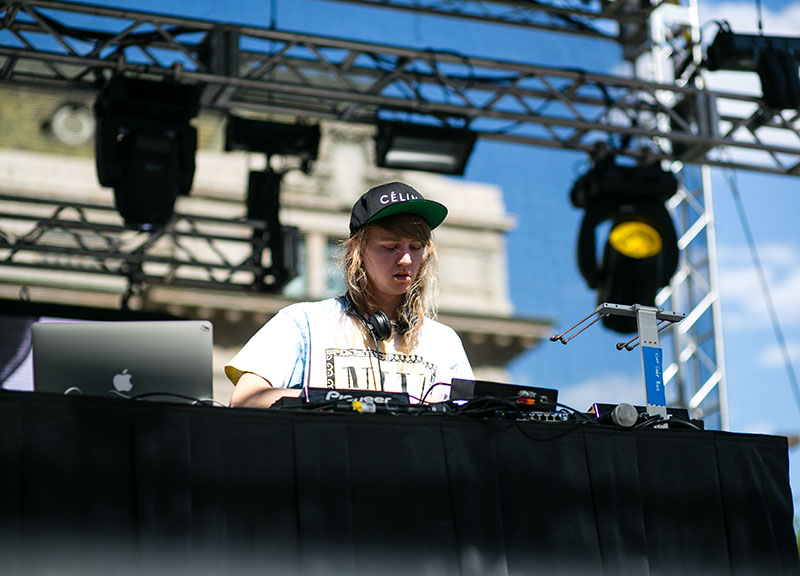 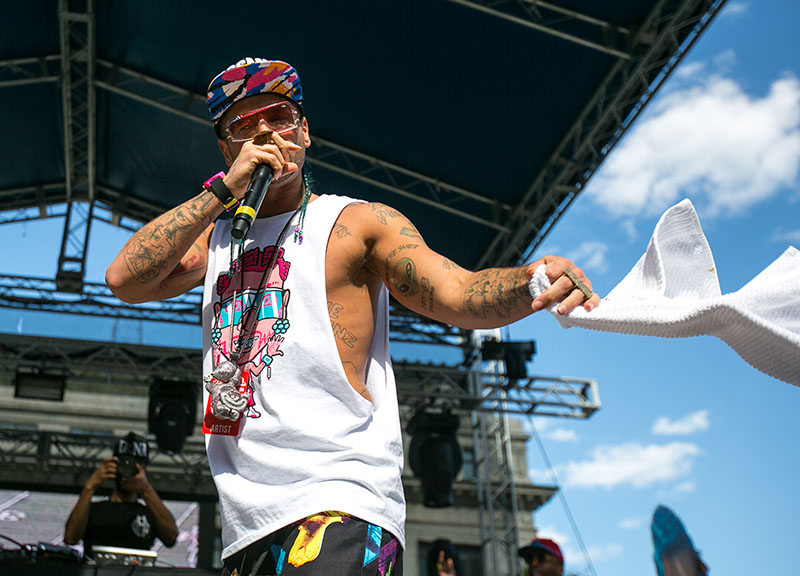 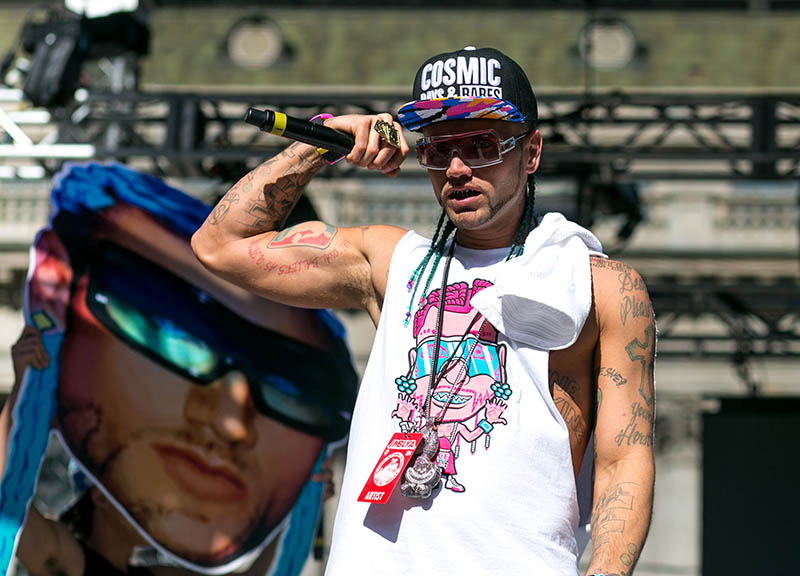 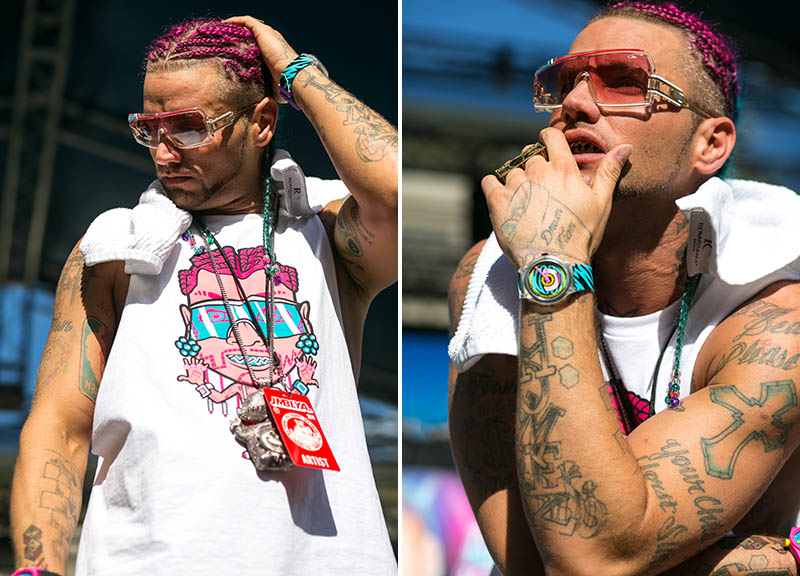 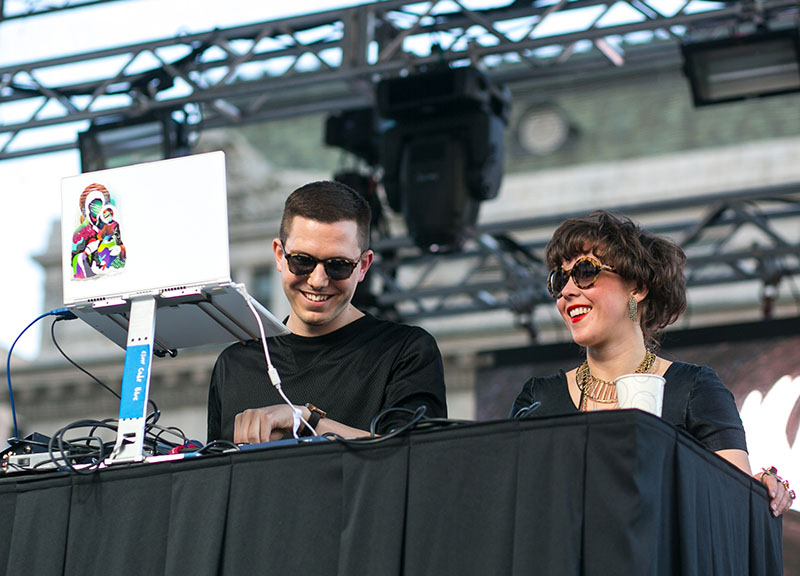 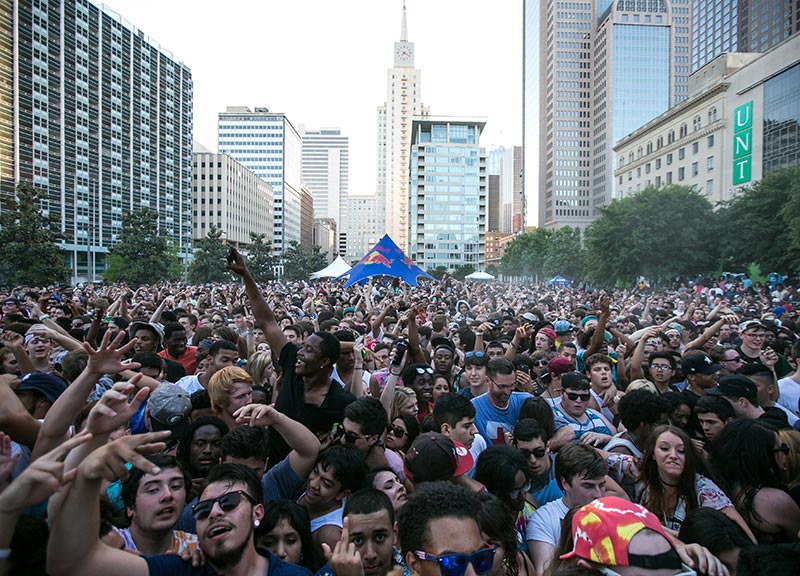 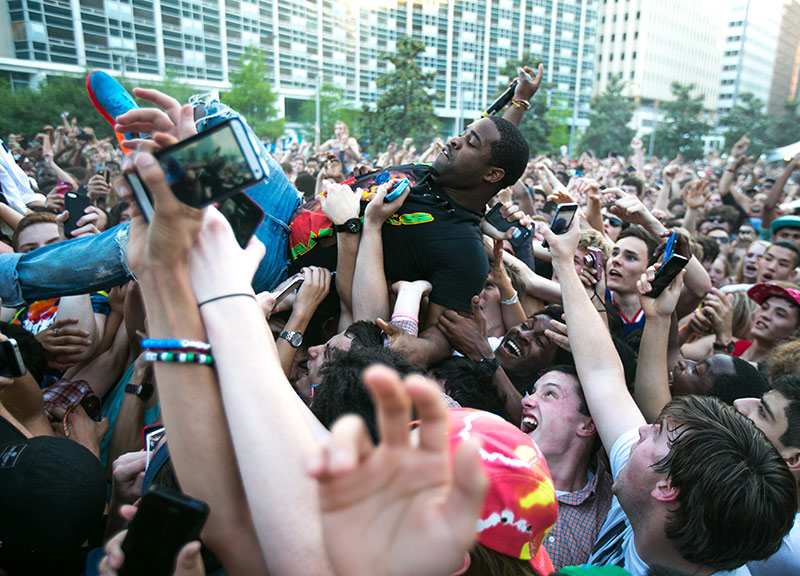 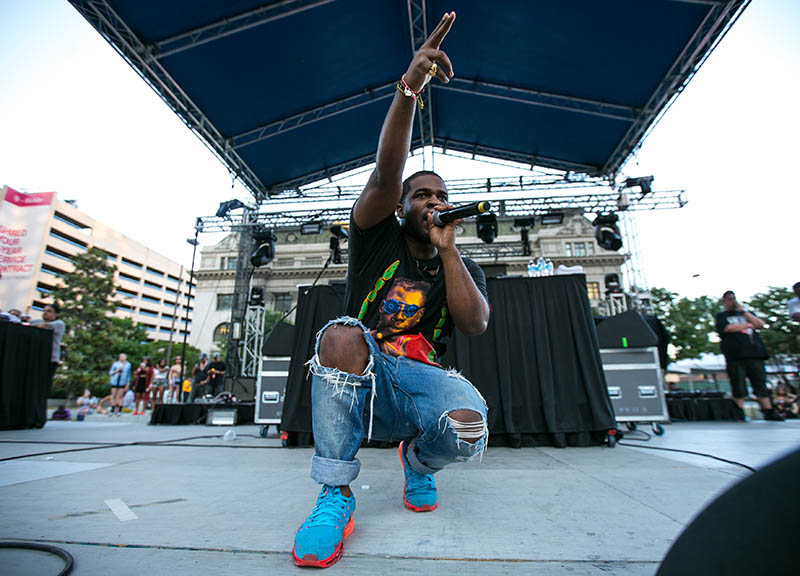 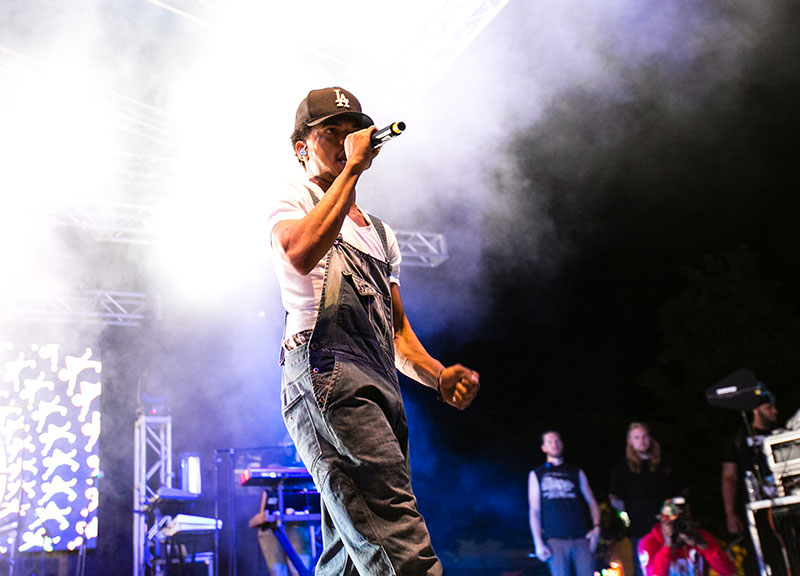 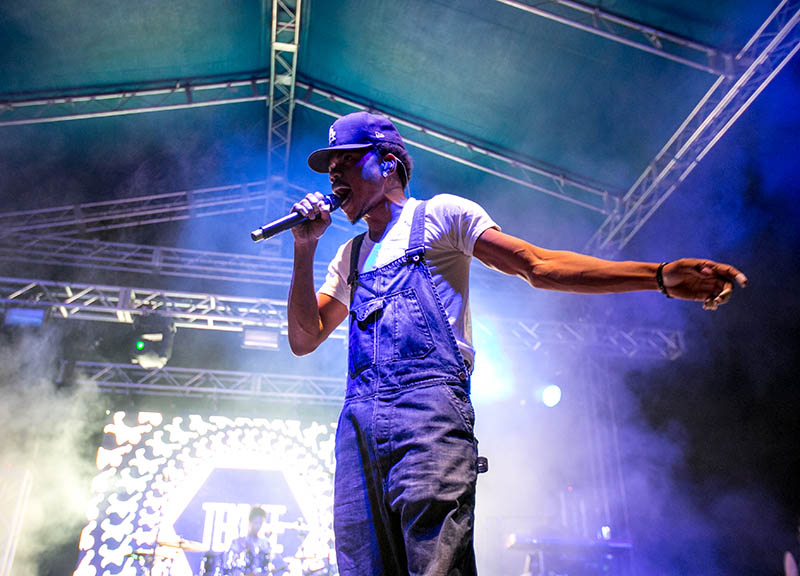 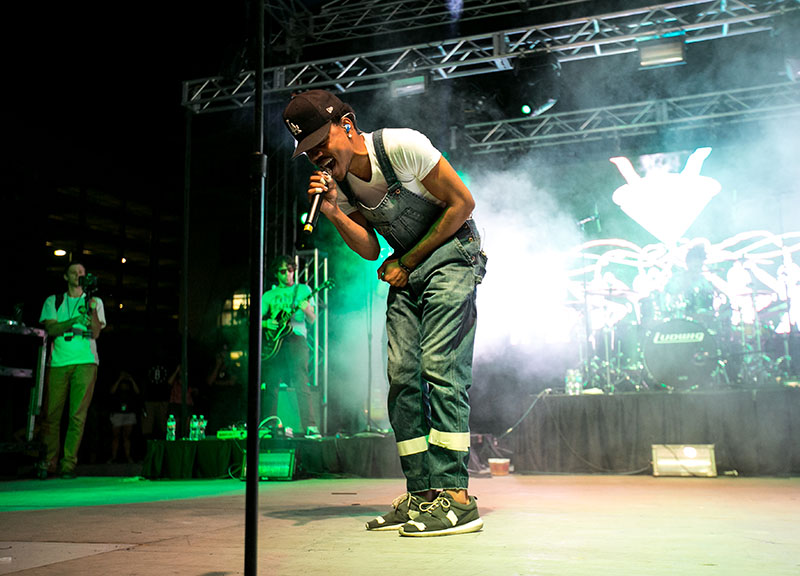 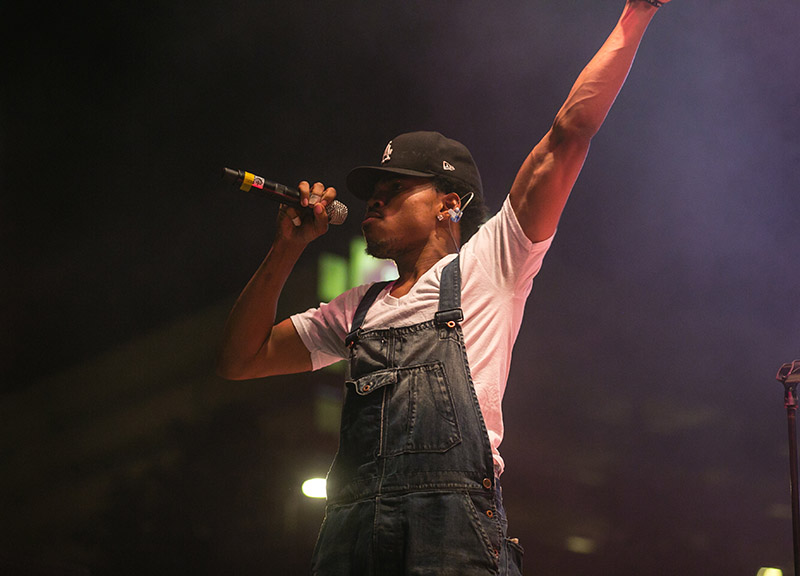 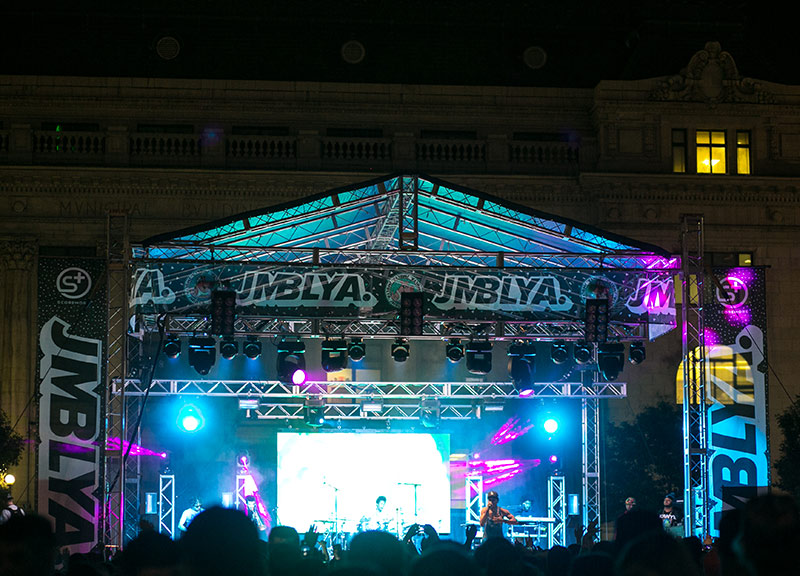