Lurking In The Dark. 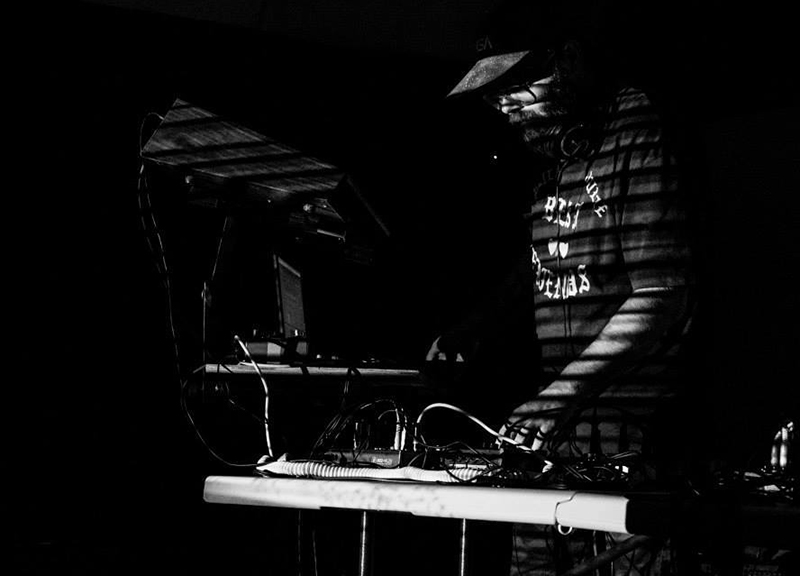 Late one night a few Octobers back, while simultaneously on a Screw kick and in a bout with insomnia, I found myself floored by the realization that no one — not so far as I could find through Google, at least — had done what, at the time, seemed like such an obvious thing to my pun-loving mind.

Why, I wondered, hadn’t anyone yet chopped and screwed Michael Jackson’s Thriller and called it Triller?

But the idea stuck with me. And, next time I ran into my buddy Donovan Jones, I suggested he take the idea and run with it. Listen, I’m no producer. But Dono is: In addition to playing bass as part of the post-rock titans This Will Destroy You, he creates even darker, more warped solo music under the name Black Taffy; and under that same Black Taffy moniker, he’s also a prolific, Screw-obsessed DJ and producer who can be caught performing around town (presuming TWDY isn’t touring as it so often does). Dude was the perfect fit. Better still, he was immediately down.

For the next year or so, it became a backburner project of his — something I’d jokingly pester him about every now and then, even while never really expecting much to come from it. A couple weeks back, though, he hit me up out of the blue to tell me he was almost done with the project. And then, over the weekend, he messaged me again to tell me he’d finished it. Right in time for Halloween too, how fitting.

The resulting effort is pretty amazing — way better than my dumb insomniac mind could’ve anticipated. It’s gloomy, trippy and catchy. It’s familiar and distant at once. It’s like when a friend you haven’t seen for years suddenly comes back into your life completely change but while remaining as compelling as a figure as ever.

Here, I’m honored to present the premiere of Black Taffy’s Triller. Give it a listen, then keep scrolling to read my chat with Donovan about how he put this project together.

Do you remember when I first approached you about this and what I said?
I remember when you proposed this idea — over a year ago. You were super excited about it because no one had made a reference to Thriller by using Triller.

That’s basically how it went, yeah! Do you remember your immediate reaction?
No…

I just remember your immediate reaction as “OK, I’m in!” and with no hesitation at all — just a right-away “Yes!” before I could even really finish explaining my thoughts on it.
[Laughs.] I’ve loved this album forever! Before I learned how to edit properly, I used to slow this tape down and use a looper pedal to chop and screw. That second song has been my jam for years. This is my favorite Michael record. It’s like asking me to screw a Sade record or something. No-brainer.

So what was it like trying to tackle this project as a whole? What was the process like?
I’ve tossed around the idea of doing full album remixes for a while, but never really got around to it because it can be really exhausting and somewhat limiting. However, I think this one was much easier to see through to completion. Initially, I slowed the Thriller cassette down using the first track “Wanna Be Startin’ Something” as a guideline for overall tempo and pitch. After recording the tape into Ableton, I then mapped out how I wanted to “chop” each song — eighth note, quarter note, triplets and whole note chops. with other variations included. I then recorded the midi performance of me running through the tracks chopping and using various effects. I used several different tempo delays and phasers until I had a good foundation to build on. Then I recorded the Ableton mix through a mixer with an effects loop back to tape. That is the final mix. Then it was record the final cassette dub back into Ableton and do an overall EQ — maybe some slight sidechaining to get the kick/bass to pop — and there we are. True Screw shit.

Is that comparable to your normal process when trying to chop and screw something?
For my normal process, I don’t usually make such an effort to degrade the audio.

So why do that here?
I’m a bit of an asshole when it comes to Screw music. I’m a purist. There is a shitload of terrible chopped and screwed mixes done in programs like Audacity or Ableton or whatever. Super crisp, very digital. easy-sounding mixes. DJ Screw’s mixes can be really quiet or blown out, or his tape is worn out and phasing all on its own. Sometimes it sounds like he was super throwed off during a session and he just loses control of his cuts, making sloppy chops or adjusting the volume to the overall mix. It’s really noticeable, and it’s human. I think that’s the important part. You can tell someone is steering the ship. Most of his mixes are very lo-fidelity. That was the equipment that was available. I want my mixes to reflect a similar process. I think it adds so much more character.

I think the lo-fi aspect really works here, too. It adds a cool sheen to the proceedings — like an additional layer of nostalgia.
Yeah, I think it came out well. It’s also interesting to me. Thriller is kind of a psychedelic record — to me, at least — and I definitely consider chopped and screwed music to be very psychedelic as well.

So you said you’d done “Baby Be Mine” before and that you also used “Wanna Be Startin’ Something” for the overall pacing. Did you jump around otherwise? Did you go in any particular order?
So, I’ve played around with slowing this record down a few years previous. I always gravitated to “Baby Be Mine.” Some songs just sound better slow than others.
When I was recording the initial slowed-down version of the album, I just let it play through, front to back. I sped up a few songs that I thought were lagging or that just didn’t like as much. Like, I’m not a huge fan of the Paul McCartney feature.

I think that pays off here in the final edit.
Man, I forgot how good the ballads on that record are! The last three tracks are really nice. “PYT” is the jam. Has been and will be.

There are some real “moments” in this version — like when “Thriller” kicks in, for sure. But, for me, there’s this part where the drums start to really reverberate in “Beat It,” and it just slays.
[Laughs.] I’m glad you caught that! It’s nice because its not always on — the delay — so, when it does sync up, it really melds everything together.

Do you have any favorite parts here on this mix?
I was starting to hone in on the last half of the record. “PYT” and “Lady in My Life” I’ve listened to a couple times But I’m still scrolling to “Baby Be Mine” forever. Super swampy.

I know the tape stuff and screwed stuff has been near and dear to you for a while and that, as Black Taffy, you’ve been out and about playing the stuff you’ve created as far as that goes. How do people who know you from This Will Destroy You react when they find out about this side of your music?
I think a lot of people get more where I’m coming from when they catch one of my solo shows. They understand my “voice” and how it contributes to the overall conversation in This Will Destroy You. We’ve said countless times as band that we are influenced by screwed-down music, rap and R&B. We all have a love of bass — like gut-crushing bass — and it’s not a stretch to be making music in those genres for me. It can feel much more natural and truer than playing in a band can be. The Screw shit is one thing, but my solo work is a bit less removed from what the band is doing. There are heavy electronics and big beats, but there is also ambiance and subtle melody. It’s a meshing of those two worlds for me — kind of new age and Screw music. It’s only shocking to people that really limit the music they like. But, yeah, “Screw Age” is what I’ve been calling it.

I like that term, “Screw Age.” And I get it. I remember when you officially joined up with This Will Destroy You for tunnel blanket, we did a story in the Observer that was largely centered around how obsessed you were with low, deep bass sounds and how it was changing up the overall band direction some.
Yeah, that was a thing. We were pushing it hard then, trying to prove a point. I think it’s worked out. No This Will Destroy You record sounds the same. There is a noticeable progression from the first EP, Young mountain, to our last record, Another language. It’s been good.

What’s happening with This Will Destroy You these days?
We’re taking a break from touring at the very moment. We hit it really hard earlier this year. It was kind of like that stretching rack in The Princess Bride where you lose all the years of your life. We’ve also been talking about getting into the studio before the end of the year just to write and record. There are talks of a 12-inch or something of the ilk — a short EP or something.

I know you guys just announced a New Year’s Eve show at Dada, too, with Cygnus and John Congleton. That’s a really cool, pretty dark bill for New Year’s.
Yeah, I’m really excited about that. I haven’t seen any of John’s new material, but I’ve been catching some [Cygnus] shows, and that dude is on point. I’m really happy for him getting that Autechre tour. He was over at the house the other night with Brian Tomerlin and John Lamonica and we were just chopping it up about how infinity is not infinite. Deep discussions!

Where people can find more of your Black Taffy stuff?
I just self-released a cassette called Champagne Scandal. It’s got a lot of old Bone, Nas, Warren G, Aaliyah, Shai, Kendrick Lamar and Freddie Gibbs — all on the Screw Age tip. I also just had a split cassette come out on Dallas Distortion Music with my buddy Derek Rogers for Dallas Ambient Music Nights. I’ve got some tapes up at Good Records and in Austin at End of an Ear, too. I sell tapes at shows. And I have a Bandcamp and a Soundcloud. Oh, and I’m doing a cassette release THRWD some time in early November. And I have a show on November 21 with George Quartz at the Texas Theatre.

I know, for a while, you’ve been searching for a residency here in town where you can play this stuff out live.
I would love to have a monthly. I think it would bring a lot of people out that don’t ever see this part of Dallas.

You mean chopped and screwed stuff, specifically?
Yeah, the people that actually jam Screw all day. Just Screw music. I don’t really get to perform that in public. It’s rare. My other stuff is much more palatable. I think certain people get real stiff when they hear a pitched-down N-word or drug reference. Beauty Bar actually hit me up, thinking of doing a monthly. We’ll see what happens.