In The Fort Worth Suburbs, A Small Wrestling Scene Thrives. 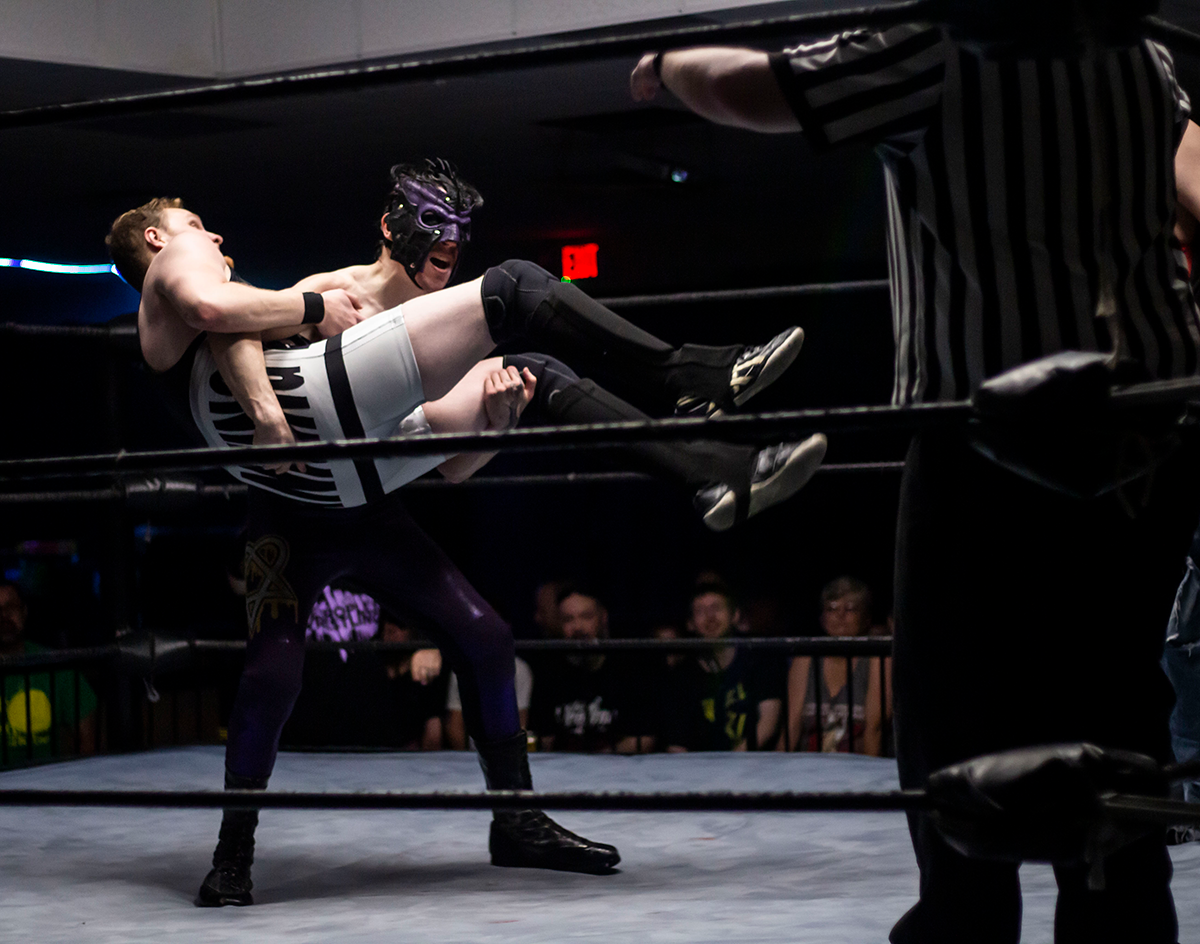 Bedford’s MPX Wrestling Might Not Be Packing Out The American Airlines Center Like The WWE Or New Japan Pro Wrestling. But That’s Part Of Its Charm.

Photo and video by Jessika Hardy.

Earlier this month, some of the biggest wrestling companies in the world held major events in Dallas.

The WWE hosted its weekly wrestling show Monday Night RAW at the American Airlines Center on July 1. Less than a week later, New Japan Pro-Wrestling conducted the opening round of its international wrestling tournament within the same venue. One night after that, Impact Wrestling held its Slamiversary event featuring former WWE-ers like Rob Van Dam and Rich Swann withing Dallas’ Gilley’s entertainment complex.

Each of those affairs filled their venues with the rowdiest of fans. But, fervent for the sport of pro wrestling as those attendees may be, many are unaware of the thrilling wrestling bouts that take place right in their backyards on a regular basis.

Every Saturday night in Bedford, cars collect outside a nondescript strip mall in Bedford as the clock nears 7 p.m. A purple and black sign reading “MPX Event Center” hangs above the blacked-out windows of a storefront, and a line begins to form at the door. Several children dart in and out of the line as people queue up, waiting for the doors to open to get inside and get the best seats in the house. But they aren’t gathered for Dwayne “The Rock” Johnson or The Undertaker — they’re gearing up to watch the regional wrestlers who perform in North Texas’ only serialized area wrestling promotion.

Rock music hits and lights begin to flash as the first wrestler of the night, Prince Mahalli, enters the room. Boos rain down on him from the crowd. Mahalli yells back at the audience, calling them street-rats while leering menacingly at them before jerking the microphone from the ring announcer, and leaving her to fall flat on the mat. The booing intensifies, as Mahalli has just made the hundred people in the room his enemies.

This is just another week in Bedford. Unlike the compounds of MPX’s major-television counterparts, fans here are inches from wrestlers that drag each other in and out of the ring.

It’s the closeness and intimacy the fans have with the wrestlers that makes the company so special says Steven Kirby, the owner of MPX Wrestling and also one its wrestlers.

“You can reach out and touch every single wrestler you like, and you can get in the face of every wrestler that you don’t like,” Kirby says. “You can yell and scream and be heard in a way that you can’t at a bigger show.”

Wrestlers Mr. Fitz and Emily Violet joined the MPX roster after Fitz brought his young daughter, Brooklyn, to see her first pro-wrestling match. Fitz’s wife eventually joined in on the family treks from Rhome, Texas, each Saturday, too. Before long, they felt compelled to try making the jump from die-hard fans to participants. Kirby, impressed by their passion for his events, was instrumental in encouraging them to do so.

“It’s our family thing,” Fitz says. “We come down on training nights, and we come to matches and have a good time. My daughter comes in and cheers for me. It’s good stuff. We have a lot of fun.”

From Fitz’s daughter to the 82-year-old Grandma Silver, there’s a wrestler for everyone at what Kirby calls “the costume murder gymnastics.” But beyond the obvious acrobatics and athleticism on display, MPX’s core tenet is over-the-top humor. Its Team Action tag team duo of is perhaps the biggest comedic driver on the already-theatrical show. As part of its into, the pair taunts the crowd by freezing in place and smiling, looking like characters straight out of a trite ’70s action TV show. Minutes later, the duo is back on the mat inflicting body slams and diving off the ring.

SEE ALSO: LISTEN UP, BROTHER: IT’S TIME TO REBUILD THE SPORTATORIUM. // Now’s The Time To Bring Back The Venue That Established The City In Wrestling Lore.

While the high-flying stunts and sweat soaring from matches are a big part of the draw, and even bigger part of MPX’s appeal is its affordability. For less than the cost of a movie tickets, fans are given access to a live, no-holds-barred performance that they can interact with.

“For 15 bucks, you come out, you bring your own beer and you hang out,” Kirby says. “And you watch a bunch of guys get punched in the face.”

That, in a nutshell, is the mission statement of MPX. There’s no John Cena or Brock Lesnar, but what they do have is an enthusiastic group of performers with dedicated fan bases, and a show that Dallas wrestling fans are increasingly coming to love.

For more information on MPX Wrestling, visit its website.