How To Date Your Friend’s Mom. 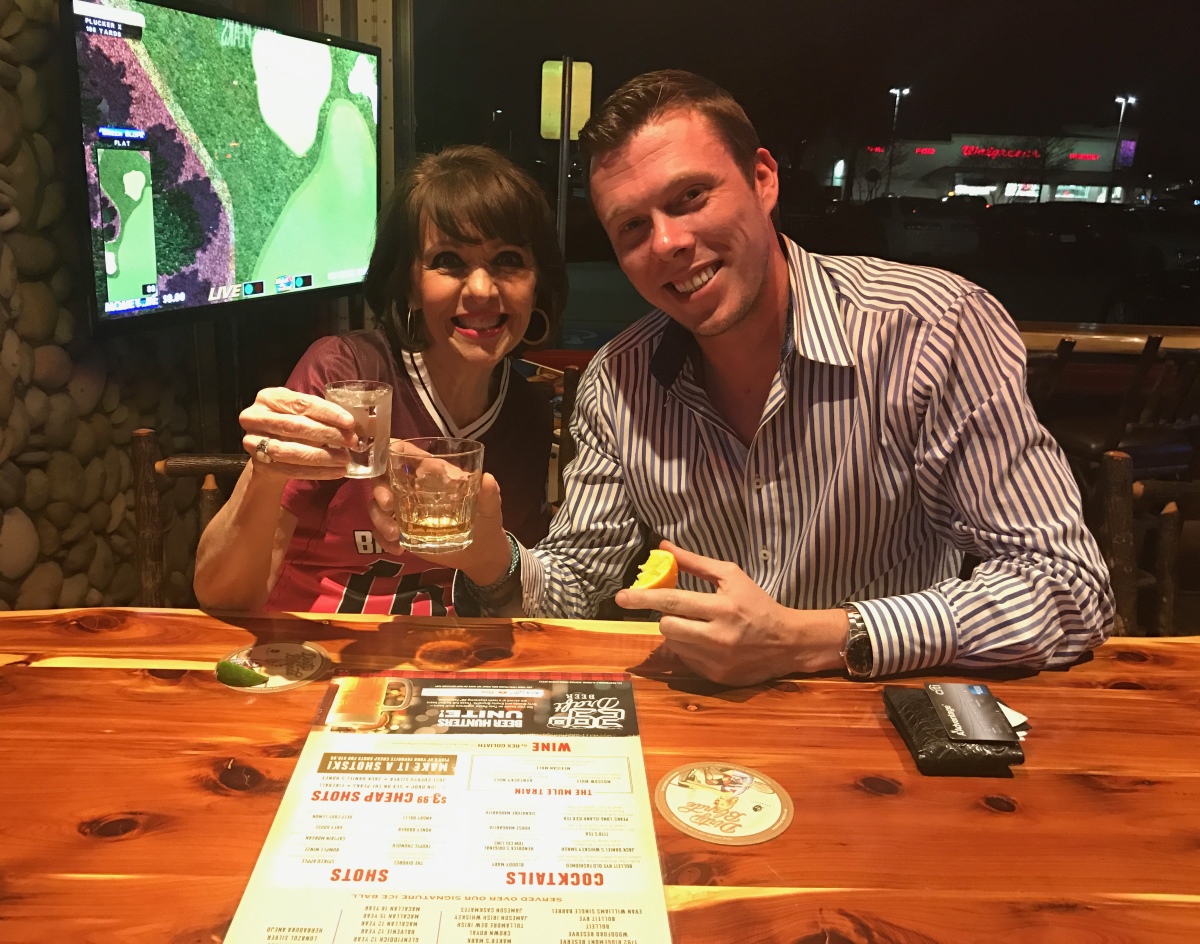 After Being Spurned By His Friend, This Guy And Her Mom Got Revenge By Going All Out To Convince Her They Were Dating.

There are about a million variations on the so-called Bro Code, but a few unwavering constants revolve around which people bros are and aren’t allowed to date. Almost always off-limits? Ex-girlfriends, sisters and mothers, although step-sisters are sometimes OK, depending on which variation of the rules your bros abide by

Recently, when our officemate Trevor was organizing a going-away party for one of his bros, his oldest friend Meleese replied to the group message saying that she wasn’t going to be able to make it. Attendance is not optional, he replied back, warning her not to “poke the bear.”

But poke the bear she did, standing pat in her position that she couldn’t make the party.

And, a man of his word, that left Trevor no choice but to start dating Meleese’s mother — or at least pull off an epic prank that made it appear as if they were dating, and for a while, mind you, all behind Meleese’s back. 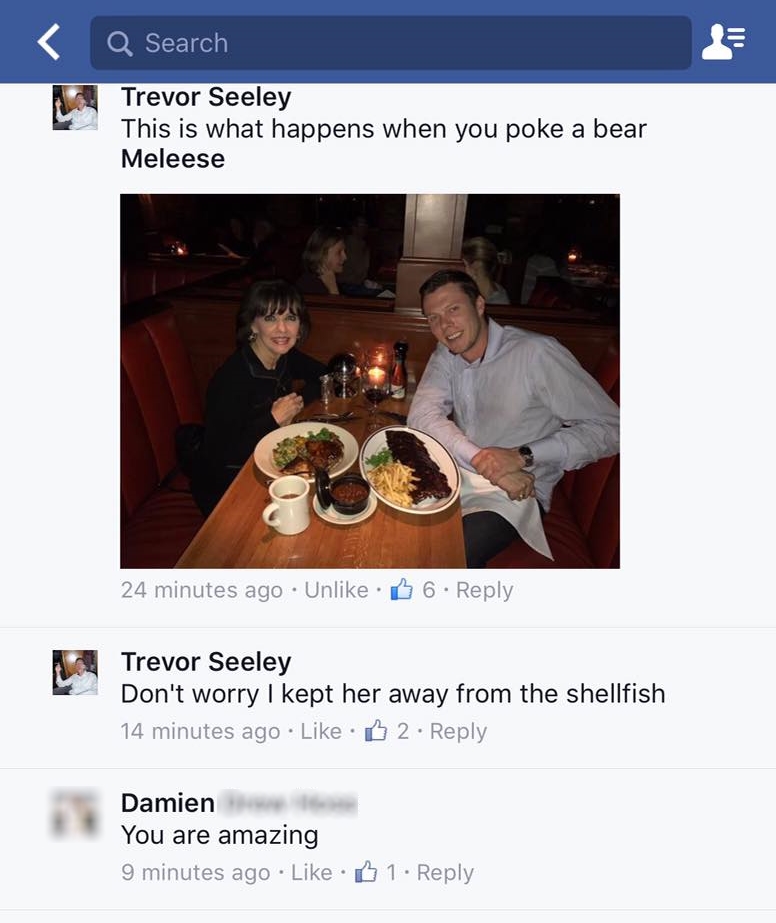 He pulled this epic prank off in a single night with the full cooperation of Meleese’s mother. Together, they spent a couple of hours driving all around town, staging photo shoots to make it look as if they’d been dating for weeks.

“The night before, I told Meleese’s mom kind of what the plan was,” Trevor tells us. “She said, ‘Oh, I think that’s hilarious.’ She actually brought extra outfits. I just had that amount of outfits in the back of my car – I’m not at liberty to say why.” 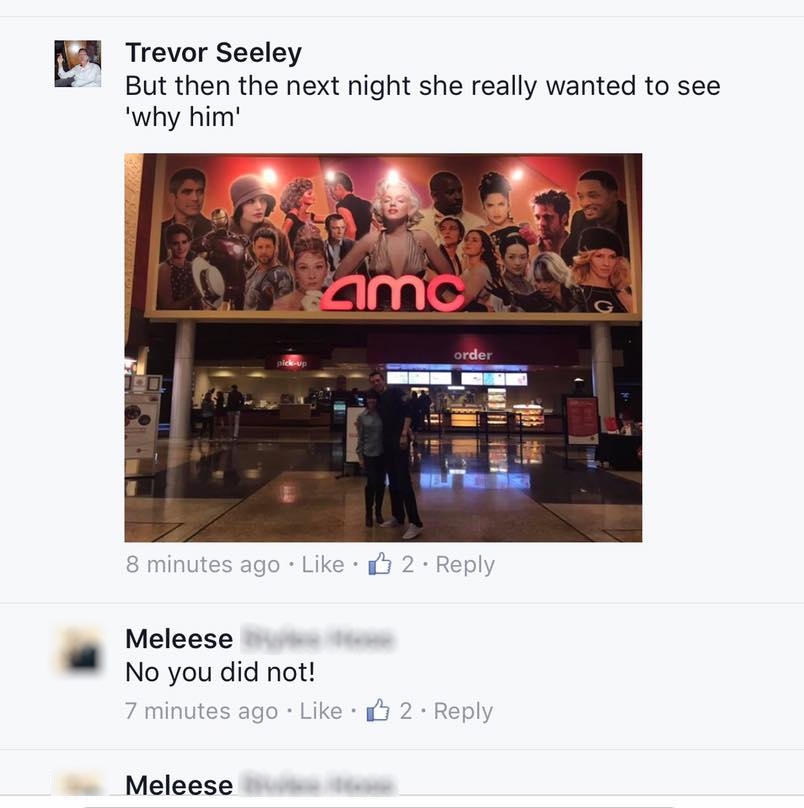 “We ended up going to dinner and we kind of discussed what we were going to do,” he says. “I was like, ‘Let’s do this, and then we’ll go over to a breastaurant and we’ll take some shots.’ So we went there. Then we went over to the movie theater — we didn’t actually see a movie, we just posed in the lobby. Then we went over to Victoria’s Secret, which was kind of the kill shot.” 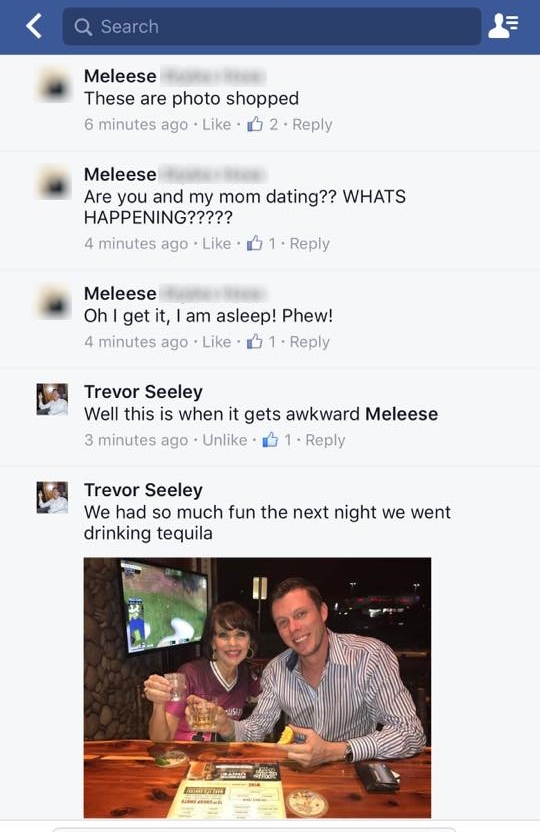 The photos of Trevor and Meleese’s mom out on the town were strategically sent back to the group thread one at the time, stretching out the gag, and really making Meleese regret declining that initial invite.

For her part, Meleese was a good sport about the whole thing.

“Well. I am impressed,” she later posted to the thread. “Lesson learned, do not mess with your best friend when he says you must attend an event, he really means it. Unbeknownst to me, said best friend, has apparently been taking my MOM out on dates and waiting until just the right moment to let me know I had been punished in only the way a best friend can punish. I didn’t think you had it in you, but you did take it to the next level. I stand corrected. Challenge accepted.” 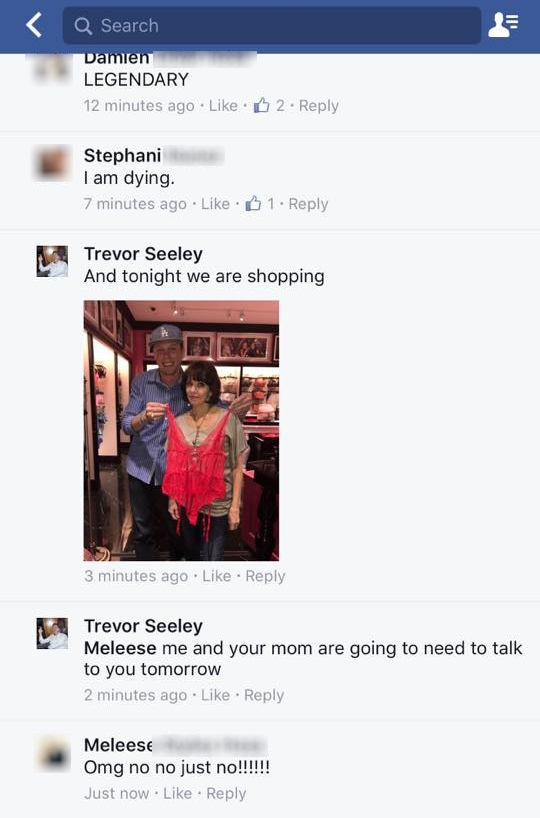 For what it’s worth, Trevor says his plan worked. Not only did it crack up their friends, many of whom still think Trevor went on four different dates with Meleese’s mother, but it got Meleese’ attention.

Says Trevor: “Perception is nine-tenths of the law. I was just trying to get a rise out of Meleese. I think she still thinks we went out four times.”

Regardless, she learned her lesson: You don’t poke the bear.

“Meleese ended up showing up to the event,” Trevor says. “She was a smidge late, but she definitely came.”