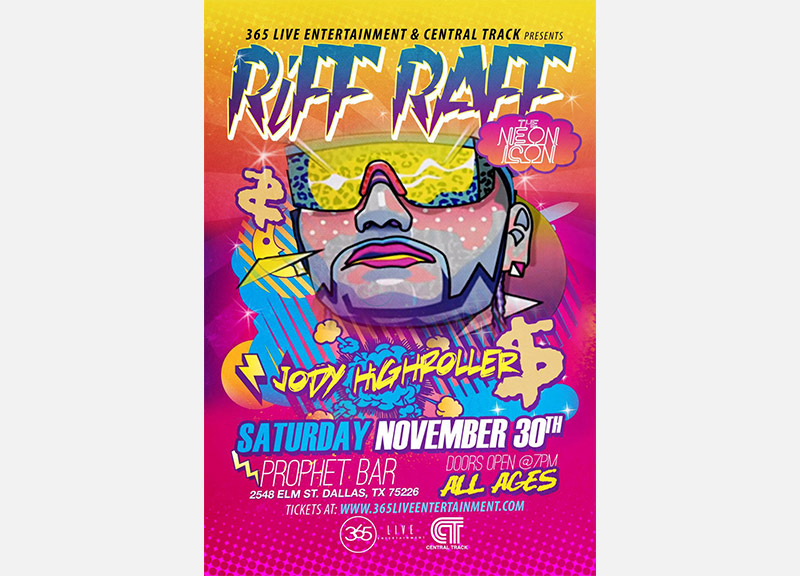 We're Bringing RiFF RAFF In For His First Headlining Performance in Dallas.

The rapper also known as JODY HiGHROLLER can't help it. He's the center of attention on all fronts. And he's constantly in the news.

He's threatened legal action to the tune of millions against actor James Franco for the portrayal of a wannabe actor that looked just like him — and sounded like him, too — in Spring Breakers. He's been arrested for drug possession after stopping traffic to chop it up with some fans. He's been grilled over and over and . He's even seen his semi-secret origins put on blast and published for all to see.

But, through all the sensational headlines, he's still the outlandish entertainer that grew his reputation to what it is now. He's continued to release tracks and videos at a breakneck pace. And he remains a king in the social media world, amassing huge followings on Twitter and Vine alike.

Seems like the only thing the so-called FREESTYLE SCiENTiST hasn't done this year is release his long-awaited debut album, NEON iCON. And, oh yeah, headline a proper venue show in Dallas.

Well, we're about to change that: On Saturday, November 30, at the Prophet Bar Ballroom, and in conjunction with our friends at 365 Live Entertainment, Central Track is proud to present the first-ever headlining performance from the man also known as DRAKE'S LAST NEW FRiEND.

Tickets will cost $22 and will go on sale on Friday right here. While waiting these next few hours before that, check out the video for RiFF RAFF's latest single, “Dolce & Gabbana” below.

Then get ready to party with us. See you on November 30.