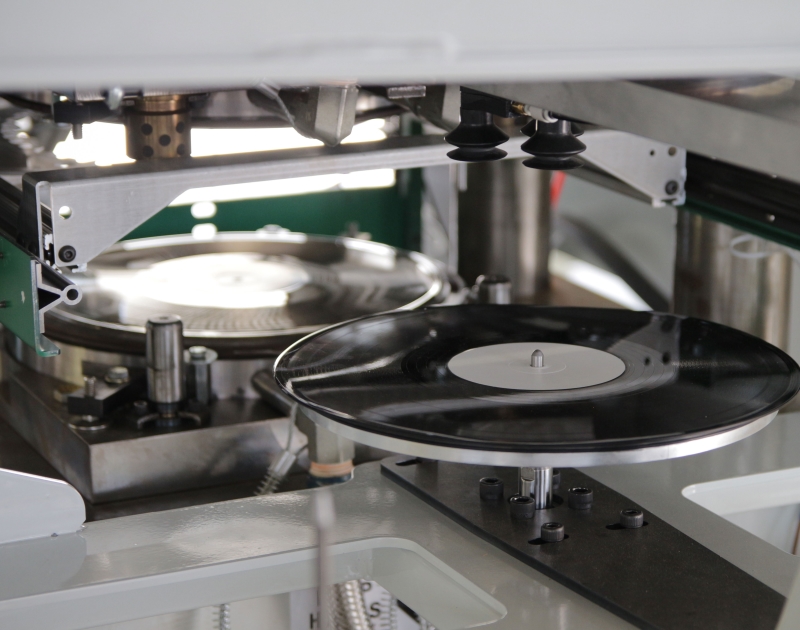 “Over the last two and a half years,” Blocker says, “we started to get more serious about it.”

His story, like so many others in the music industry, began with ambition to spare. But, unlike so many others, he’s actually making something out of those aspirations: After forming his band Exit 380 in 1999, Blocker went on to co-found the boutique North Texas record label Hand Drawn Records in 2011; and now, Hand Drawn Records is about to embark upon something truly unique.

Later this summer, Hand Drawn Records will formally open the most technologically advanced vinyl record-pressing facility in America. Operating out of Addison, Hand Drawn Pressing will house the first newly manufactured, fully automated vinyl press in the United States in over 30 years. Along with the vinyl press operated by Josey Records, which was purchased from A&R Records last fall, Hand Drawn’s plant will be one of just two vinyl-pressing facilities in Texas and just one of an estimated 20 or so around the country. But none of those other operations, Blocker says, will approach the innovation of Hand Drawn’s Warm Tone.

After having initially been launched as a brokerage service — essentially a go-between for artists seeking to produce vinyl copies of their albums — Hand Drawn Pressing’s new directive will be to manufacture those orders on its own, through its own plant.

As a performer himself, Blocker understands the ins and outs — and headaches — that can sometimes come with getting ones music onto vinyl, even as the format’s popularity and economic resurgence continues.

“Out of necessity, I wanted to go the vinyl route with my own projects and with friends and with artists on the label,” says Blocker. “In the last 18 months, we launched the brokerage service, pressing initially and now here we are. Now, we’ve been building our own facility for the past year. Yeah, it’s definitely a very organic, community-first kind of story, and it’s picked up a lot of momentum for us.”

That momentum largely centers around the plant itself, which is the first of its kind built since the 1980s, no big deal. Called the Warm Tone, this innovative press was engineered by Toronto start-up company Viryl Technologies to facilitate long production processes. In the hands of Hand Drawn, it should help work toward easing a hot-button concern prevalent in the vinyl community — that supply simply cannot keep up with demand.

Until now, vinyl manufacturers have been pressing with sufficient enough, but mostly antiquated, machines. But with vinyl back in the public eye, the lack of presses around the country that can handle large productions has started to become a glaring issue.

“If you think about a 1960s automobile that’s in mint condition, it’s still going to be bound to whatever technology versus a car from 2016,” Blocker says.

A vintage press can only produce one record per minute. The Warm Tone can produce three records in that same time. It is a machine built on speed and efficiency — and that’s only scratching the surface. The Warm Tone’s defect rate is under one percent, says Viryl Technologies owner Chad Brown. This is a significant improvement compared to a standard vintage press, which can have a 40 percent (or sometimes even higher) defect rate.

At the end of the day, the vinyl medium’s main draw has always been its sound — a factor that enthusiasts say just can’t be replicated through digital formats. It’s interesting, then, that the Warm Tone’s upgrades to the vinyl plant model largely stem from its digital operations interface. That is not to say, however, that the Warm Tone is a hands-off machine.

“Even though it has all of the digital interface, it still has a very well-crafted, manual component,” Blocker says. “It’s not like we’re just pushing a button and walking away; there’s a lot of hand-crafted expertise that has to go into it. But it does make it a lot simpler and faster.”

Blocker anticipates that Hand Drawn Pressing will produce about a million albums a year with the Warm Tone. A fucking million, you guys. He expects the operation to be fully up and running by the fall. And the first record he’ll manufacture there? It will be local, the latest album from Hand Drawn Records’ own Fort Worth indie rock band Cut Throat Finches, called Reality.

Indeed, all of the acts scheduled for vinyl production through Hand Drawn at the moment are local. But with news of the press only being announced this week, it’s likely that will change soon.

“We want to be smart about it,” Blocker says. “It’s quality first, but also we want to communicate well with our customers. This seems like a no-brainer in the manufacturing world. But we still want to apply some of that basic logic. It’s what got us to where we are now.”