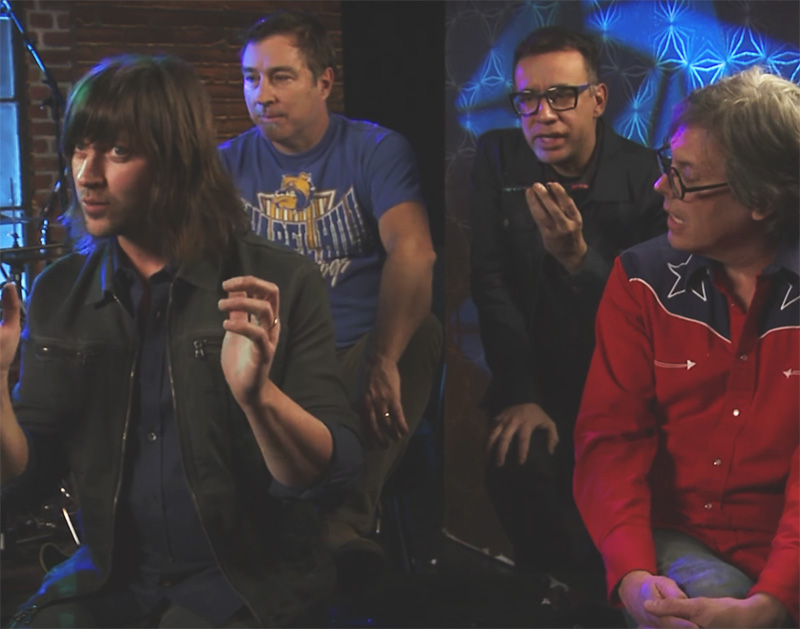 Hilarious New Old 97’s Video For “Good With God” Stars Jenna Fischer, Plus A Drumming Fred Armisen Sitting In For Philip Peeples Behind The Kit.

That’s right: For the 11th time now in the past 24 years that the Dallas band’s been around, the Old 97’s are celebrating a new album today.

This one’s called Graveyard Whistling, and it’s interesting for a few reasons. For starters, it was recorded in the very same Tornillo studio where the band recorded their objectively second-best album, 1996’s Too Far To Care. And, following in the footsteps of 2014’s Most Messed Up, this one too is a ripping callback to the band’s halcyon early days.

And you know what? The band knows it, too.

Or so it appears, anyway, as the four-piece appears to be rightly cashing in all the support chips its picked up of late as frontman Rhett Miller has become something of a darling in the comedy world, buddying up with some of the funniest folks of our time.

If u like super cute men with talents as big as Texas, pls avail yourself of this new @Old97s pressing@rhettmiller https://t.co/ZRCTN9IpbT

Or, even better, take a gander at the new music video for Graveyard Whistling lead single “Good With God”, which earned its premiere this morning over at Pitchfork. The Lee Kirk-directed video stars Jenna Fischer (Pam from The Office) as the host of a 120 Minutes ripoff and finds Fred Armisen (Saturday Night Live, Portlandia) sitting in for an injured Philip Peeples, derailing the band’s “interview” and playing honest-to-goodness drums for the 97’s as the band turns in a live take for the fake show.

A few weeks ago, Old 97’s guitarist Ken Bethea called us to tip us off to this video’s direction, too excited to sit on its hilarious results.

“It’s just funny as shit,” he told us at the time, completely in awe of Armisen’s improvisational comedic chops as a sit-in drummer who doesn’t know his role. “I probably ruined a lot of takes. I just couldn’t stop laughing the whole time.”

Bethea was just impressed, too, with how quickly Armisen picked up Peeples’ parts for the performance part of the clip. Seems Armisen was slated to appear in the video all along, but the idea of him playing drums was indeed a spur-of-the-moment call: That Peeples was injured wasn’t a bit for the video; Bethea swears he really was hurt and unable to make the trip to California for the video shoot. And, upon hearing that news, Armisen offered to sit in Peeples’ place, in turn making his appearance in the video into a far more memorable one.

“The guy just really knows what he’s doing,” Bethea said. “I had no idea heading in, but he can really play.”

Or perhaps he was just stepping up to the level of the musicians with whom he was playing? Listen to Graveyard Whistling in full below. Like we said above, it really does rip.