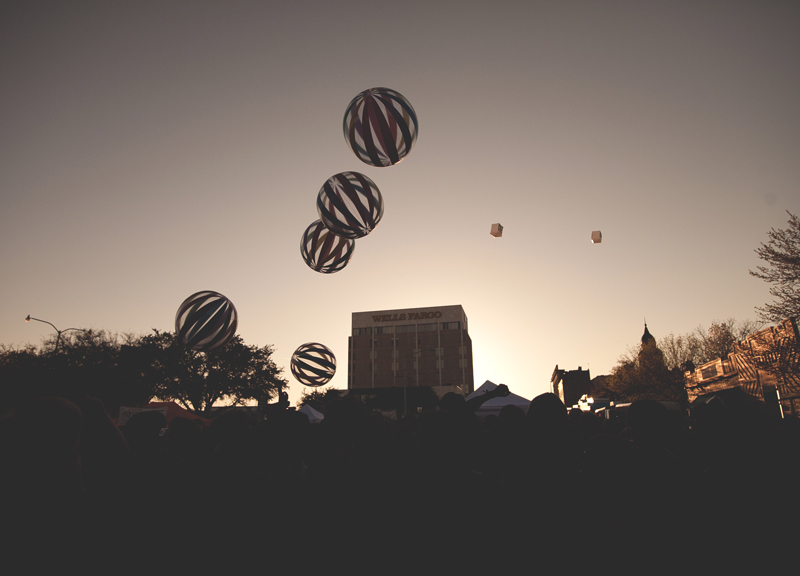 35 Things To Know About This Weekend's 35 Denton Festival.

All those unseasonable thunderstorms currently blasting the Metroplex can really only mean one thing; the wettest ever fest ever is right around the corner.

It's true; 35 Denton returns for its seventh attempt this Friday through Sunday. As you're no doubt aware this far along in the game, that means more than a hundred bands local, national and even international will descend upon Denton for three days of music spread across various locations around the beloved square.

That you do know. But there's probably a thing or two about 35D 7.0 that you'd be surprised to find out. In any case, here's 35 things you should definitely be aware of heading into the weekend.

1. 35 Denton returns this Friday through Sunday.

2. For the second straight year, this year's 35 Denton only lasts three days — but the main stages will only be used on Saturday and Sunday.

3. By our count, some 160 acts will perform official showcases this weekend. That's about 100 fewer than last year.

5. Charles Bradley performs on the outdoor main stage at 8:30 p.m. on Saturday. A onetime James Brown impersonator, Bradley wasn't discovered by Daptone Records until he was 62 years old.

6. Boat Drinks is a new Denver-based band that features ex-Dentonite and former Spooky Folk frontman Kaleo Kaualoku. It's also one of two bands Kaualoku will perform with this weekend, the other being j k p k.

7. Sponsor Miller Lite is considered the original lite beer. And they've been brewing it in Fort Worth since the '70s.

8. Tickets are currently on sale here. They run from $25 for a Friday-only pass to $65 for a three-day GA pass.

9. Also, for $100 you can buy a FastTrack pass. That gets you into exclusive viewing areas, preferential entry into late-night shows, access toa VIP bar and more.

11. Aside from bands, there are lots of panels and other daytime events. Some of those include a cigar box guitar-building tutorial and a panel on how to book better shows.

12. Most of the local bands playing the fest hail from Denton. To break it down, there's 53 acts from Denton playing, compared to 21 from Dallas, four from Fort Worth and one from Arlington. Just for fun, there's also 14 from New York and 11 from Austin.

13. In addition to the two main stages, there are eight venues participating in this year's fest. Of those, only Lone Star Taps & Caps is new to the party.

14. Electric Six performs at the GDAC's Patterson-Appleton Arts Center at 12:30 a.m. on Saturday. Their “I Wish This Song Was Louder” is the theme song to the KTCK 1310-AM The Ticket show “Cirque du Sirois.”

15. You can pick up your pre-ordered wristband on Friday at the PAAC. If you wait until Saturday or Sunday, your wristband will be in the registration area near Rusty Tacos.

16. Just like last year, bands from nine different countries will be represented at the fest. Those would be Argentina, Australia, Canada, Denmark, England, Israel, Italy, Monaco and the United States.

17. Katy Perry might have ripped off the idea for the Super Bowl halftime show-stealing Left Shark from Seattle surf-pop quartet Tacocat, who you can see at the GDAC PAAC at 11 p.m. on Friday night.

18. Artlab 3000 was responsible for this year's killer puppet promo video. The team says it was inspired to use models of Denton venues and anthropomorphic animal puppets through Pee-Wee's Playhouse.

19. Daylight savings begins on 2 a.m. Sunday morning. So remember to spring forward or you're gonna be an hour late to every band on the fest's final day.

21. One band that won't be playing the festival is Black Pussy, which was unceremoniously removed from this year's lineup. (But you can still catch them playing Lola's in Fort Worth on March 19 as part of a separate show.)

22. Speaking of rejects: The Wee-Beasties were once notoriously spurned by the fest in 2012. Not this year, though. Catch them at J&J's on Friday.

23. Everybody has to pick up their own wristbands themselves. No, sorry, your friend can't do you a solid and just grab yours while they're up there.

24. It's 0.7 miles to walk from the fest's easternmost venue (Rubber Gloves) to its westernmost (Lone Star Taps & Caps).

25. It may be a touch removed from the rest of the fest, but Lone Star Taps and Caps boasts 50 beers on tap, and 500 more in bottles and cans. It's worth the trek.

26. Speaking of locations participating in the festival, here's a map of the whole lot of them. Yeah, that's so much easier.

28. Parking for 35 Denton is free. If you can't find any open spots near the square, Lucky Lou's will be running a free shuttle service.

29. Sponsor Barley & Board is Denton's first-ever brewpub, and is co-owned by actor Jason Lee and Eric Pulido of Midlake. Try the slow-roasted pork, which comes plated atop a bed of elotes.

30. English singer-songwriter Eliot Sumner is the offspring of Sting and Trudie Styler. She performs on the Main Stage at 6:30 p.m. on Sunday.

32. Class Actress' most recent EP features production from legendary disco producer Giorgio Moroder as well as Denton's own Neon Indian. Catch her at the Main Stage at 6:30 p.m. on Saturday.

33. 35 Denton also marks the one-year anniversary for Harvest House. Opened just a day before last year's fest, it was about all anyone could talk about last year.

34. Hypnotic Donuts' Evil Elvis was recently named one of America's nine most epic donuts, in case you find yourself in need of a liquor mop.

35. Speaking of drinking too much: If you do it, don't drive — because Denton has Uber now. First-time users can use the promo code “35ride” for a free $20 voucher this weekend.