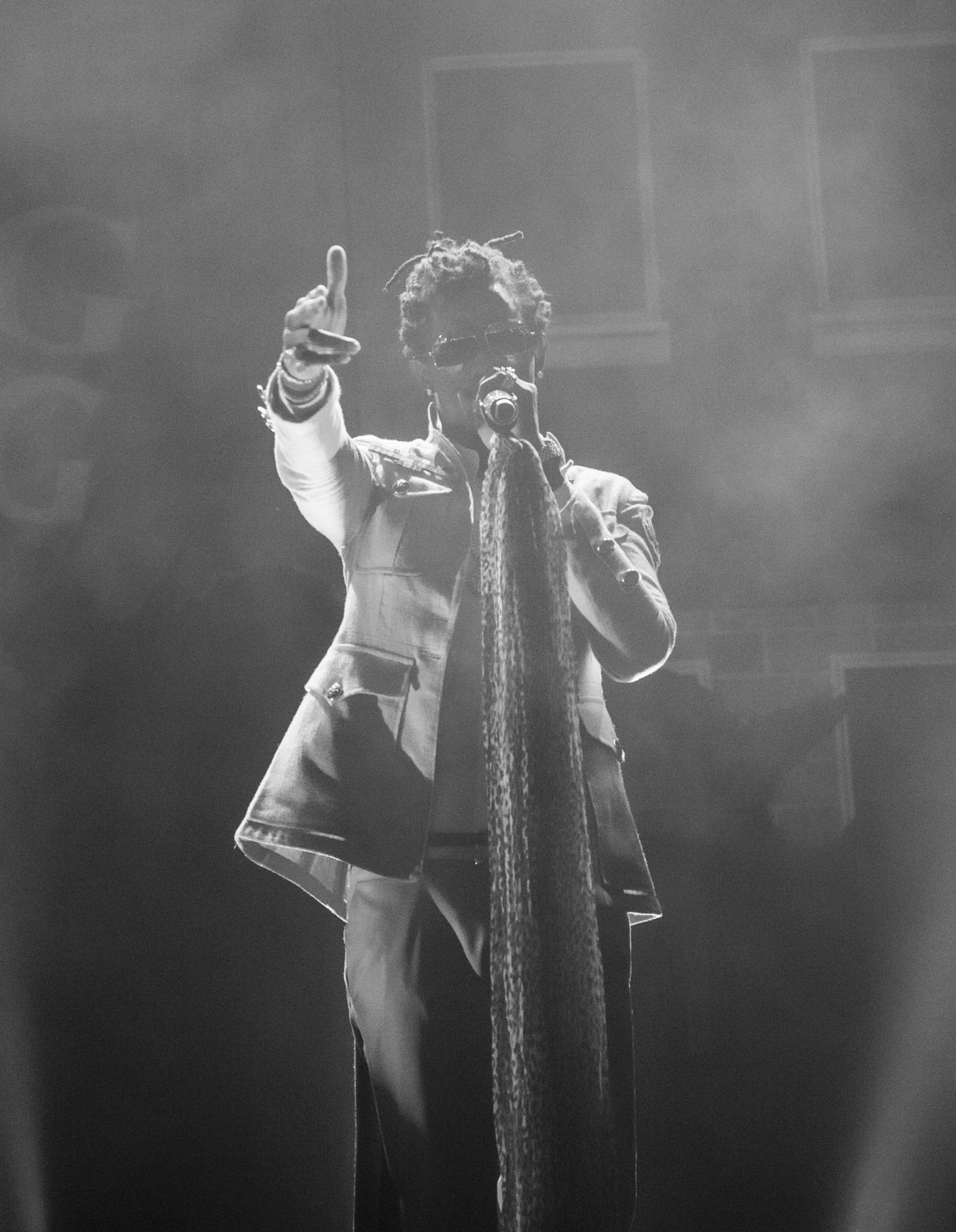 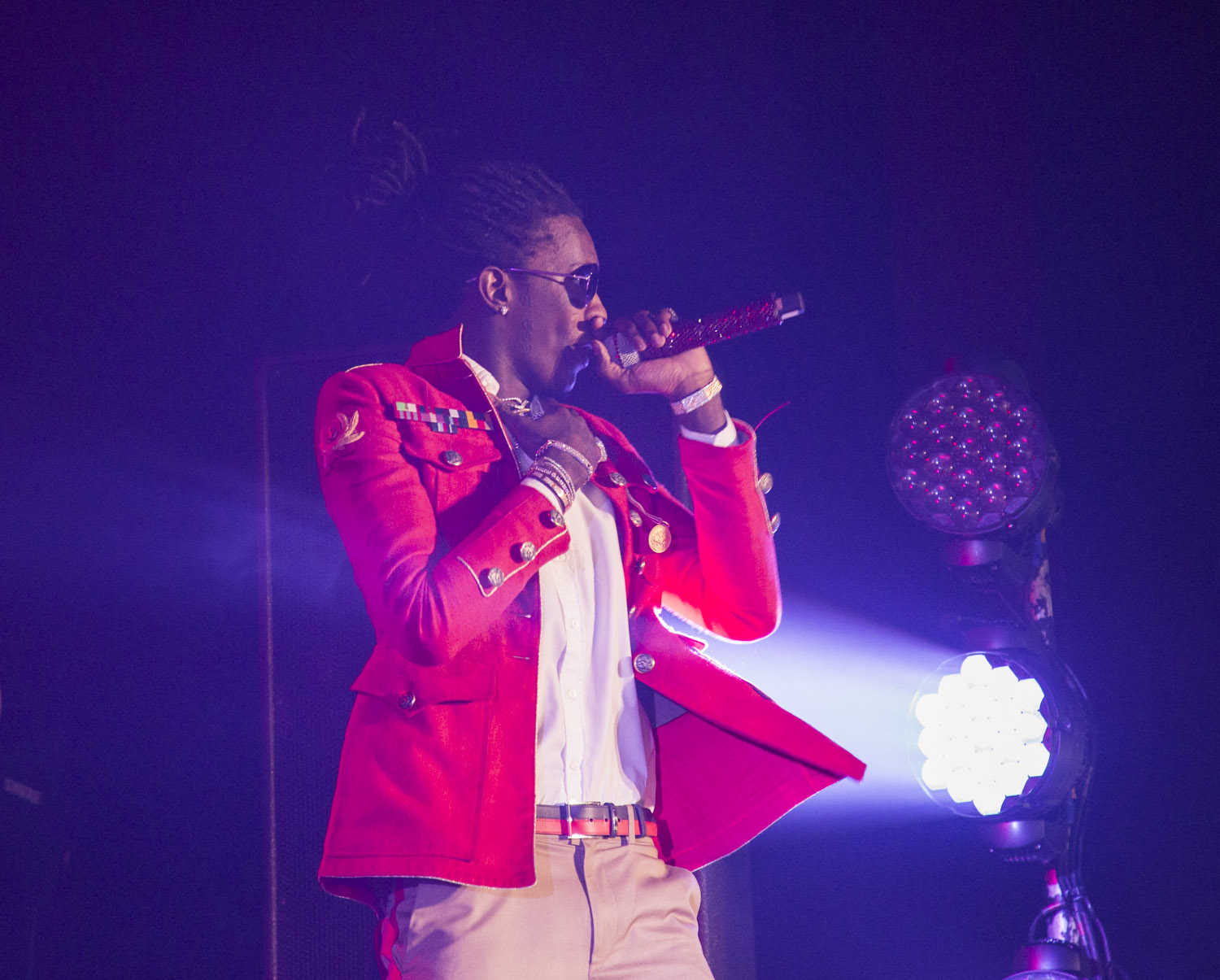 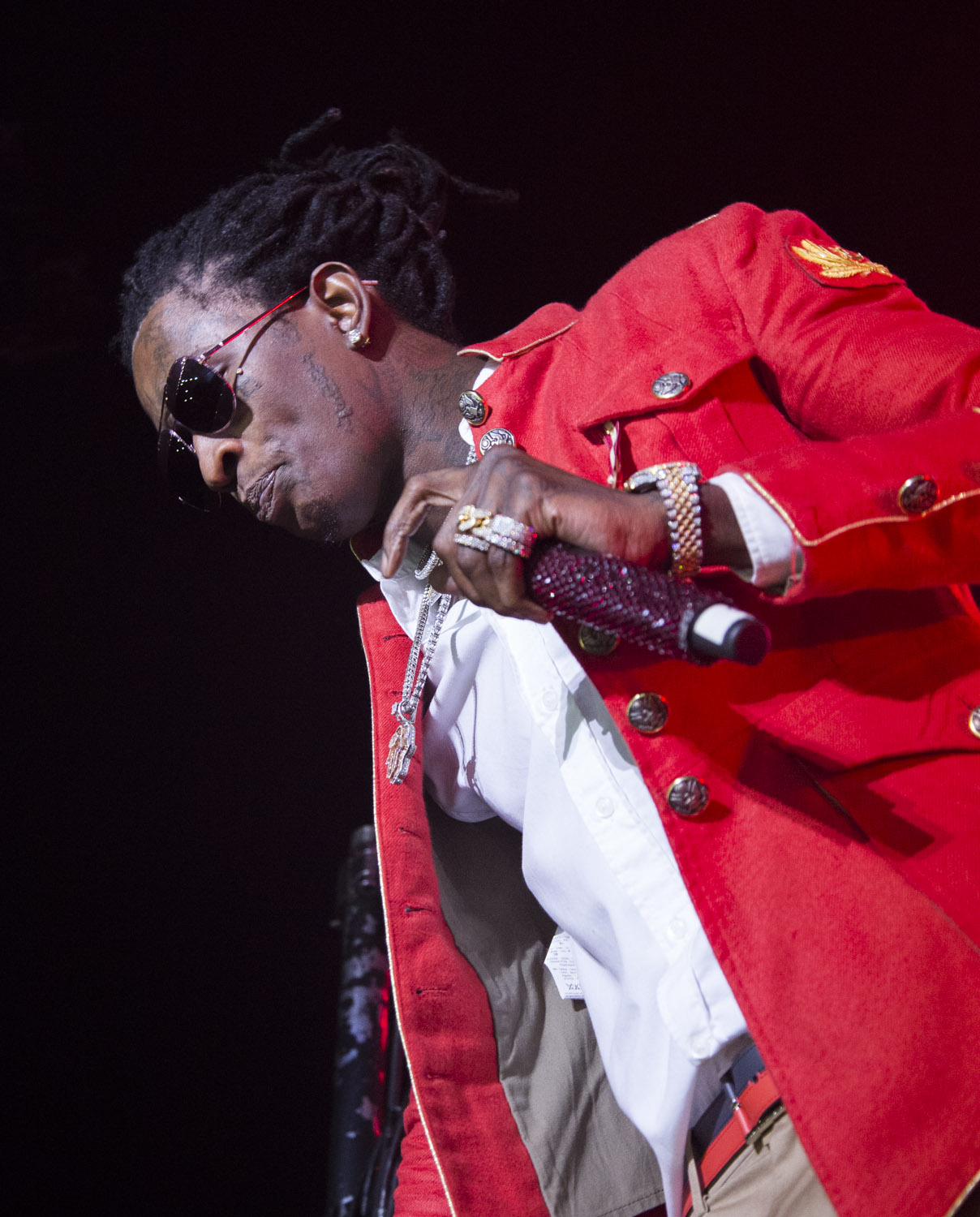 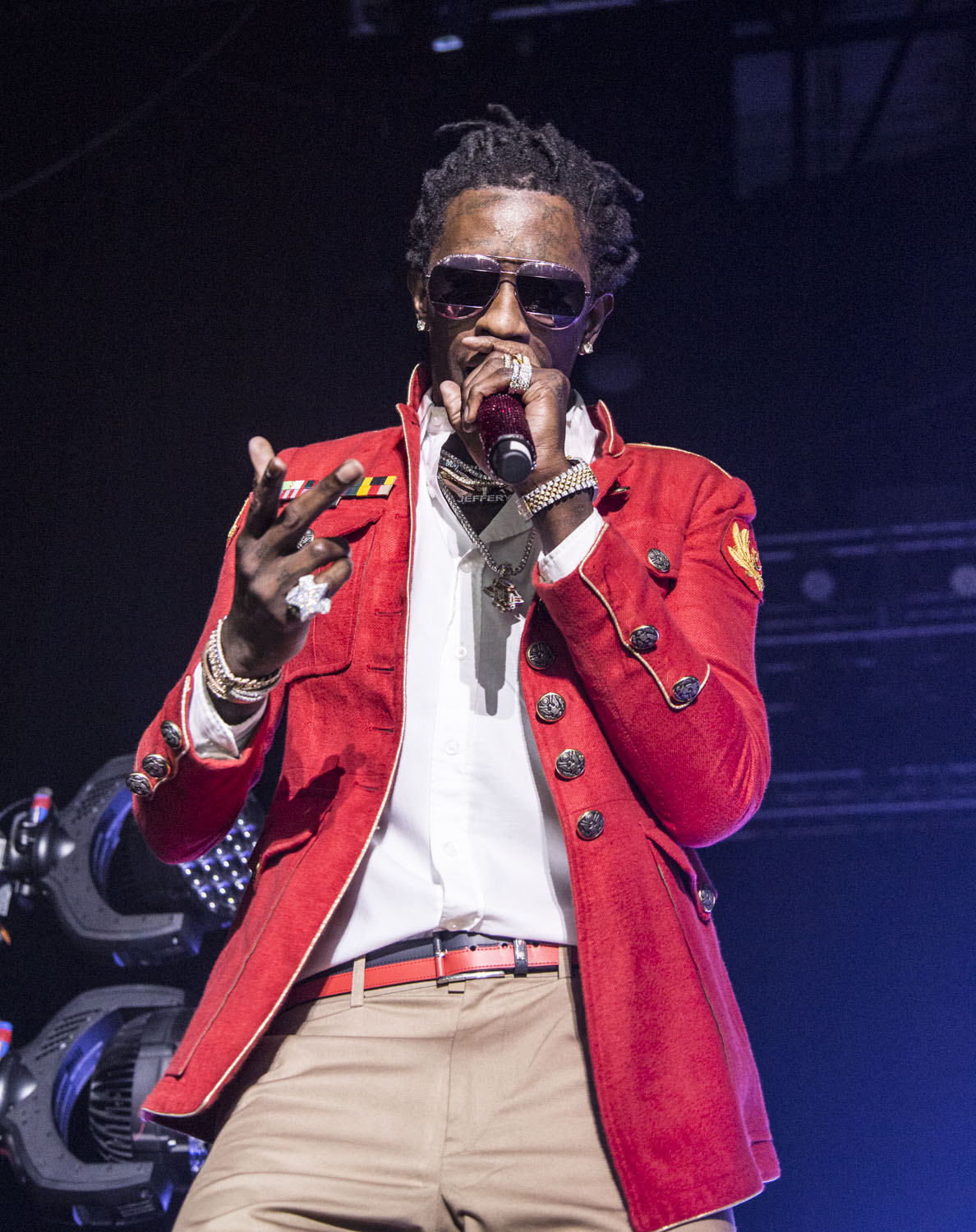 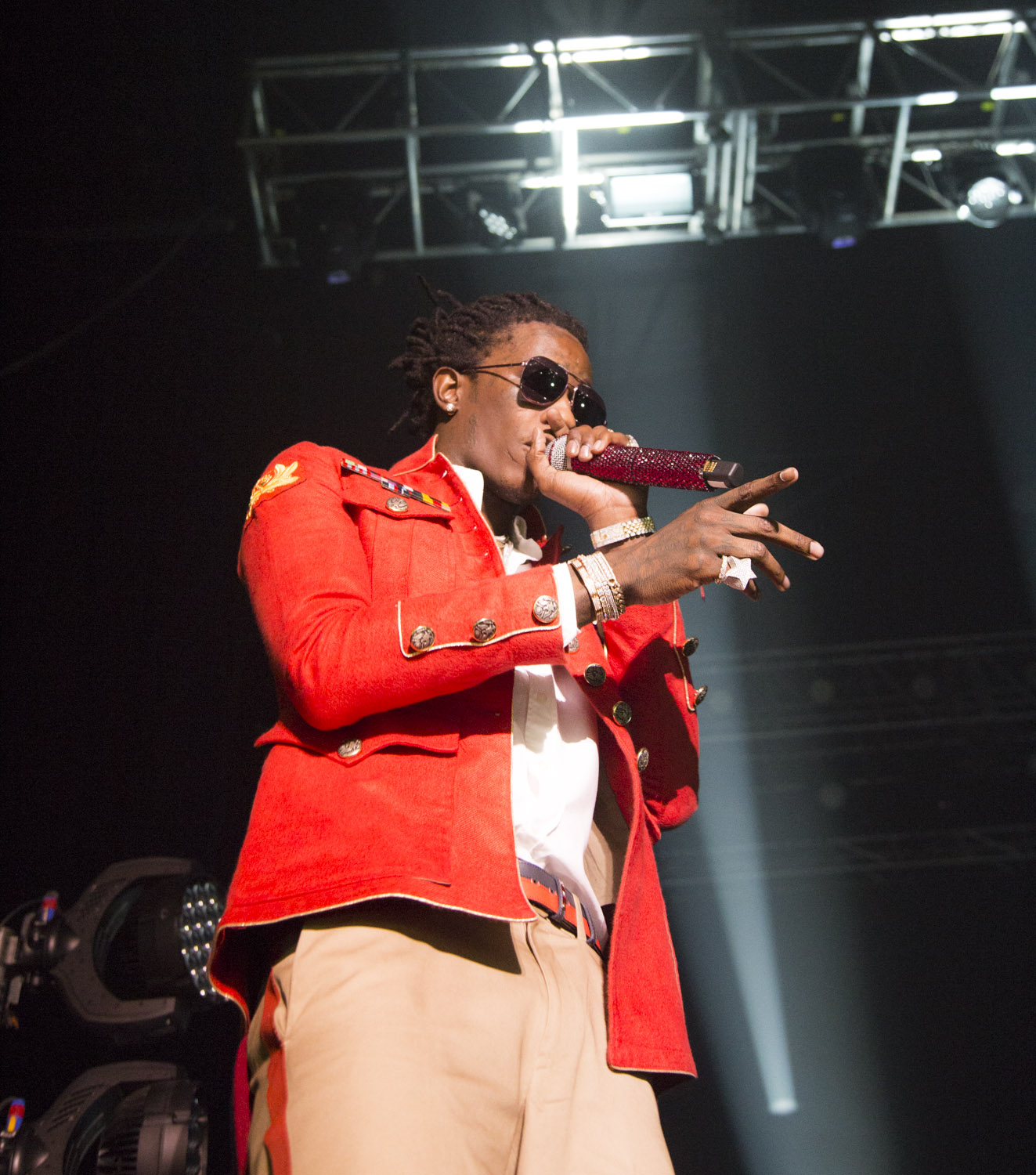 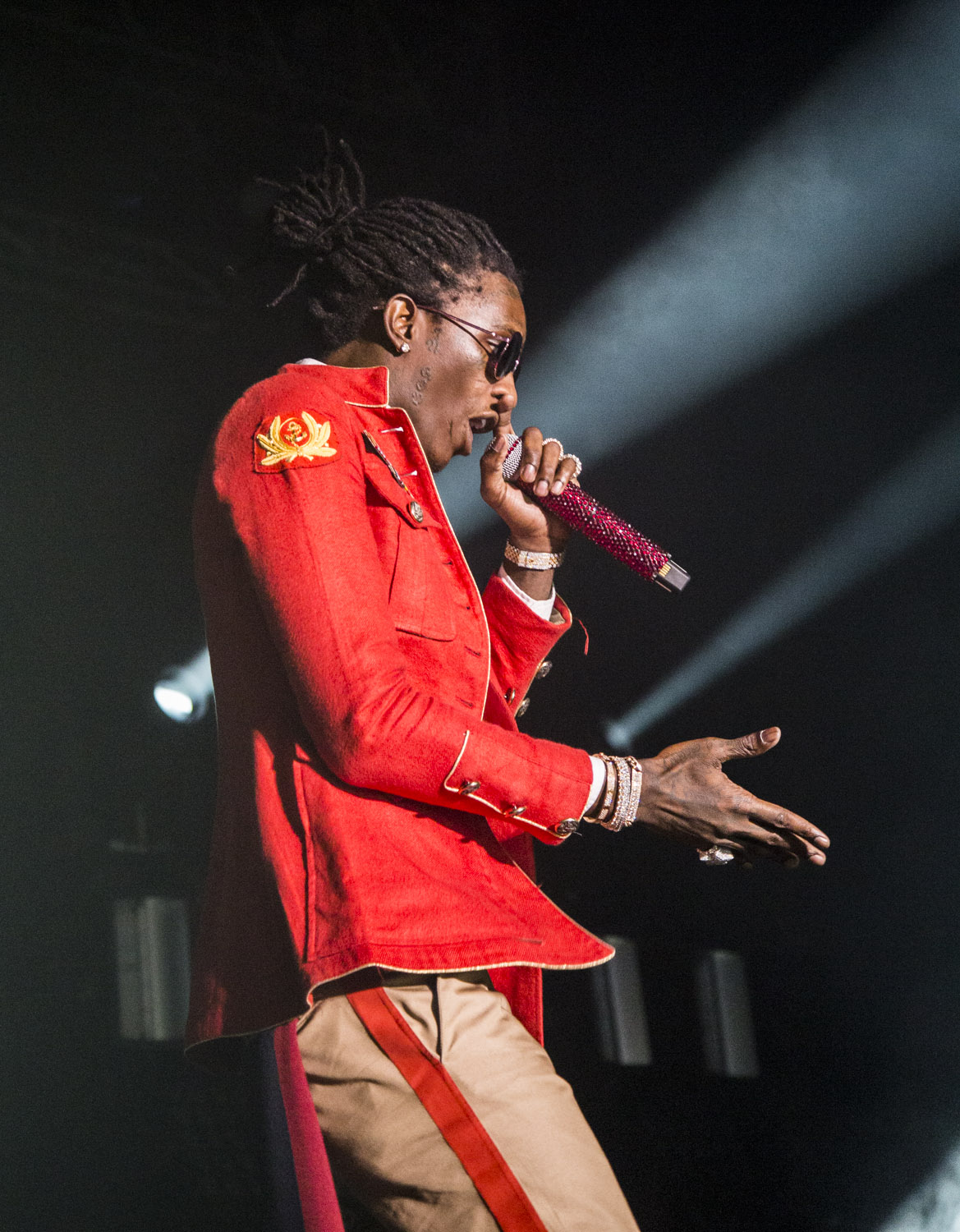 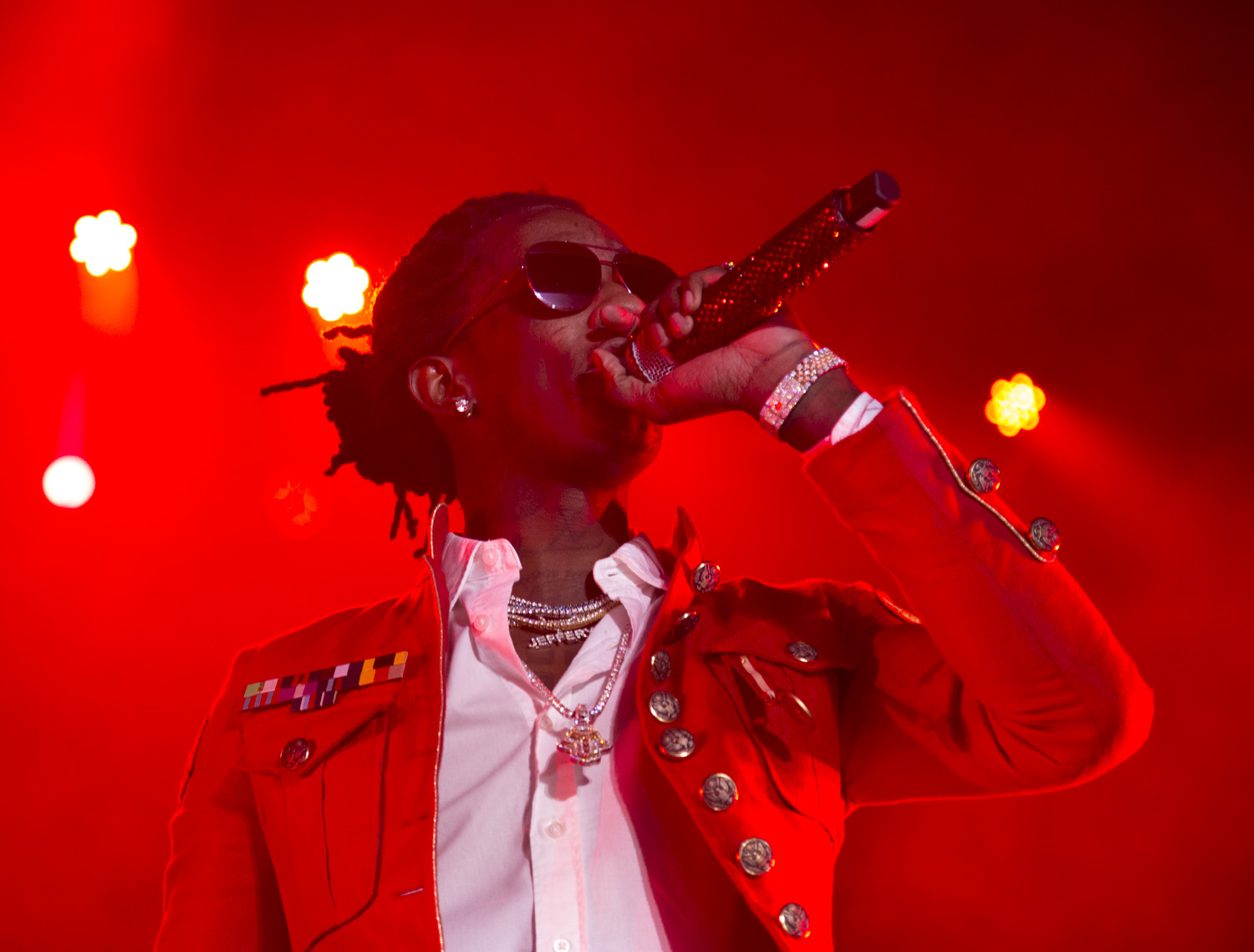 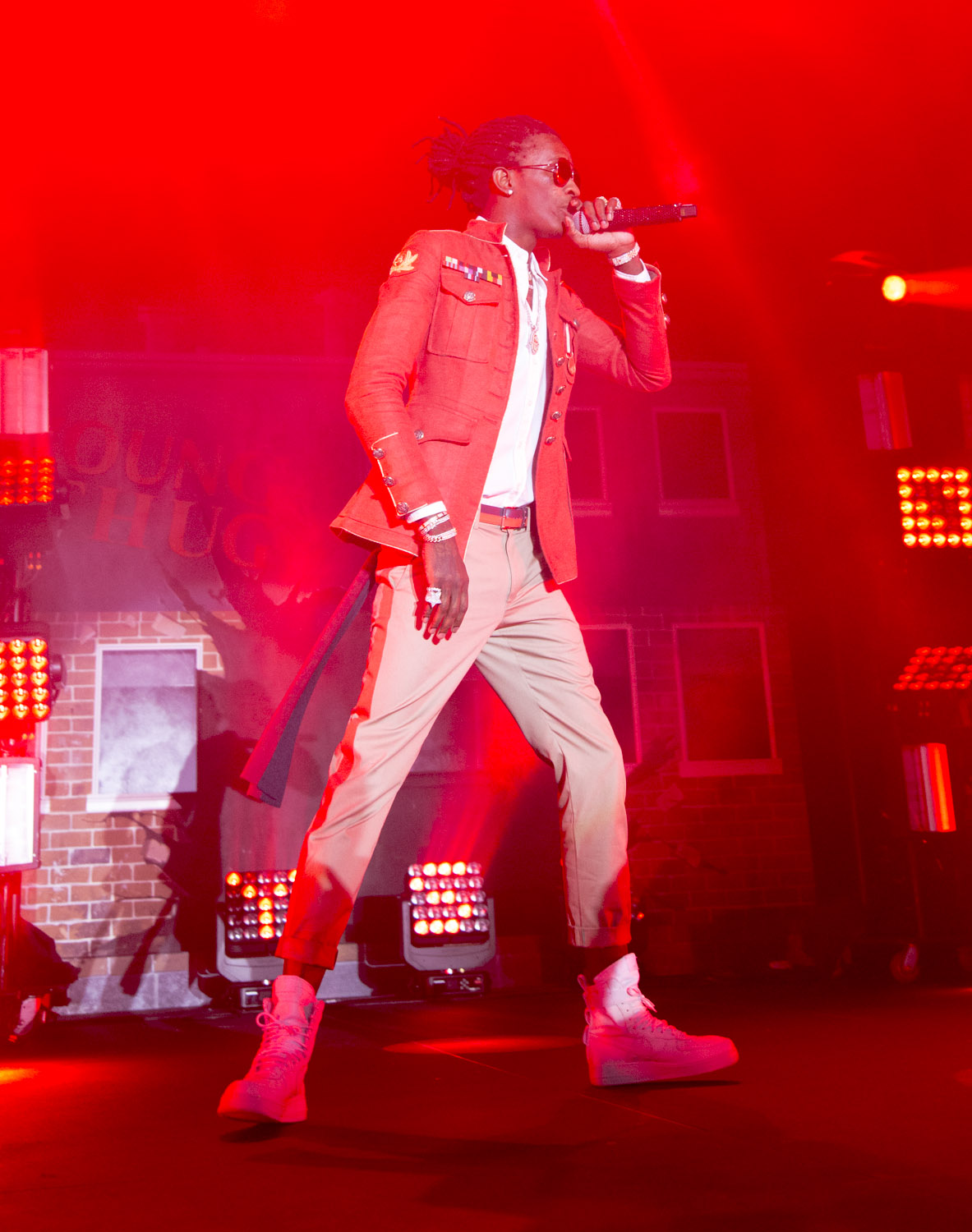 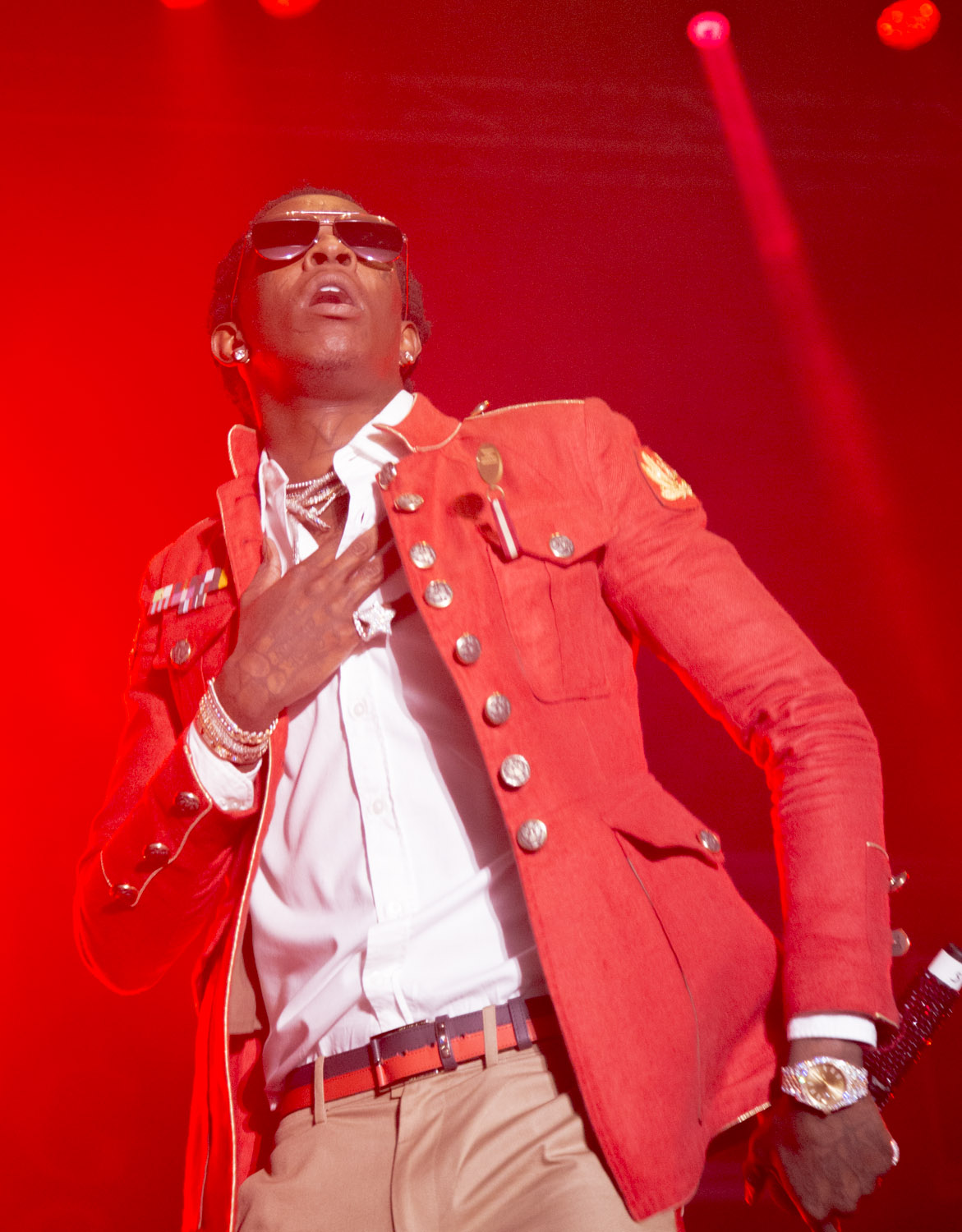 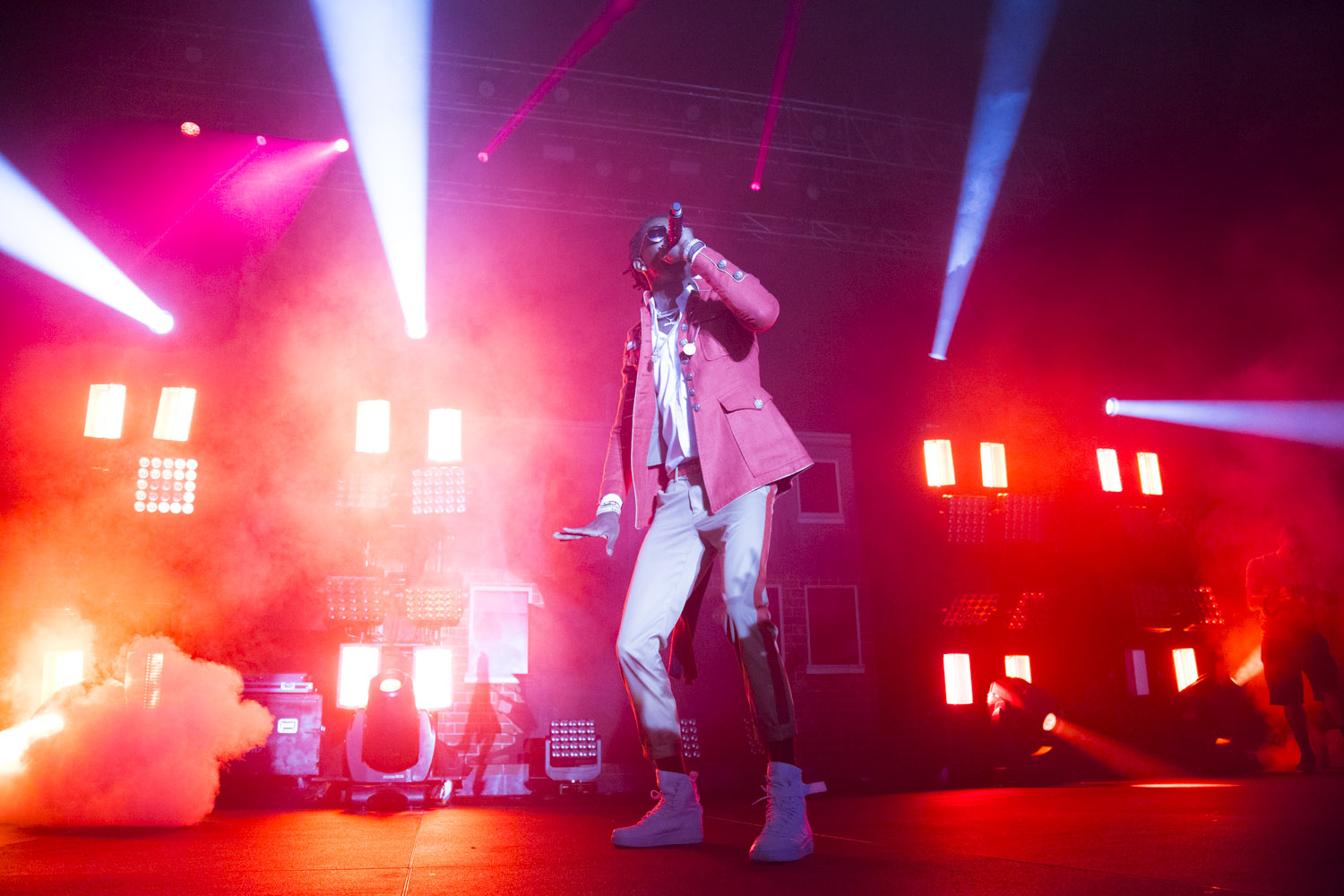 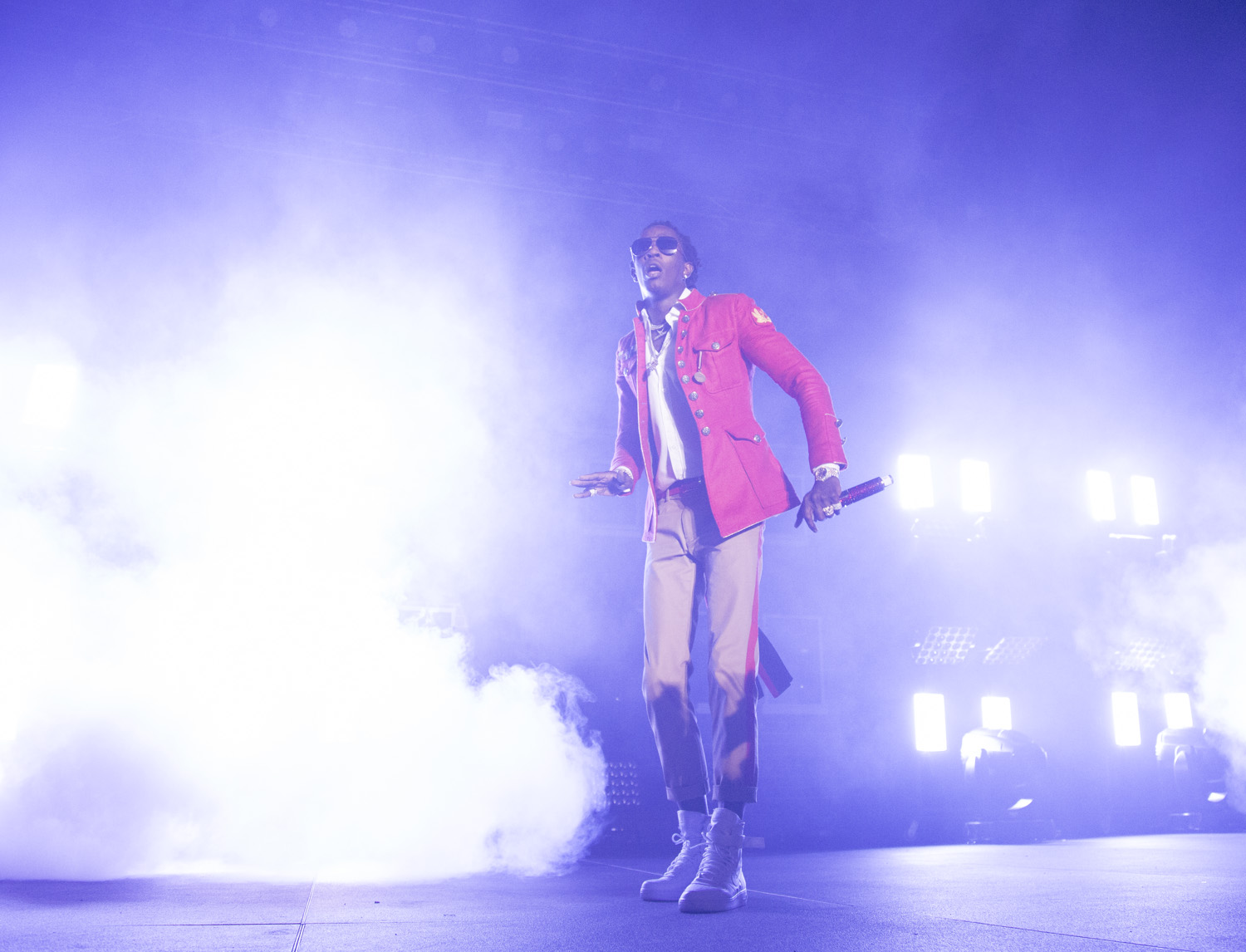 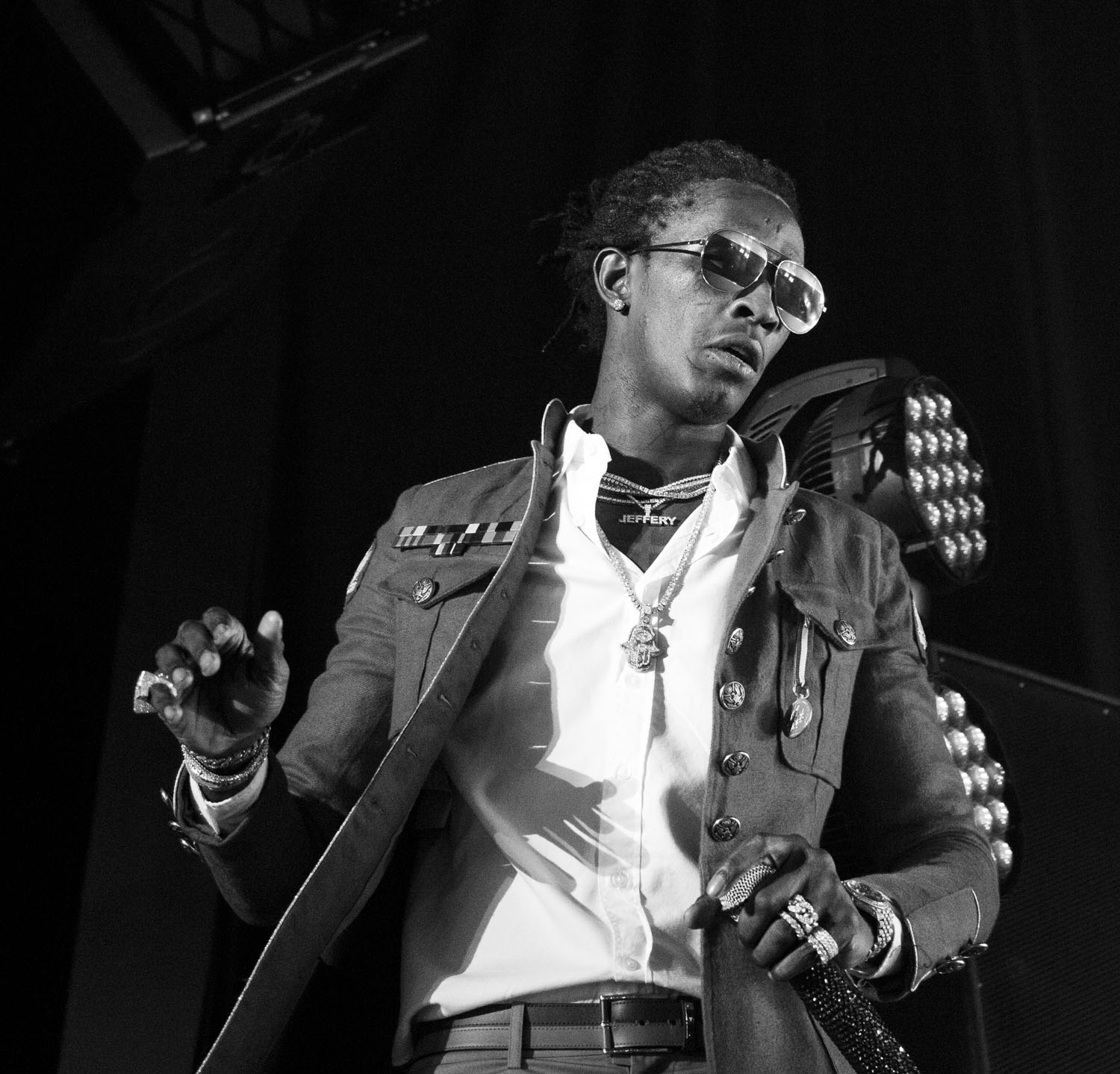 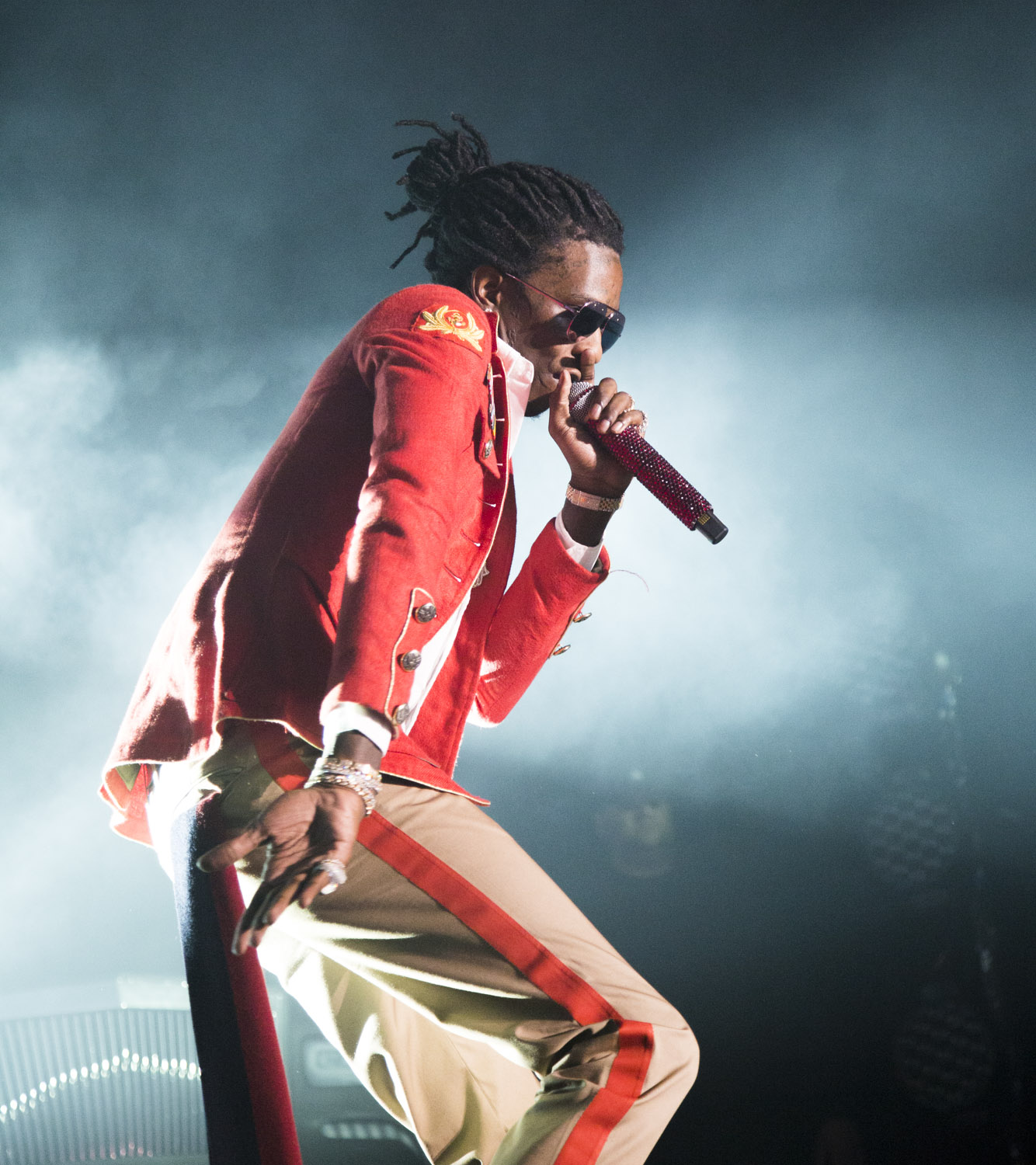 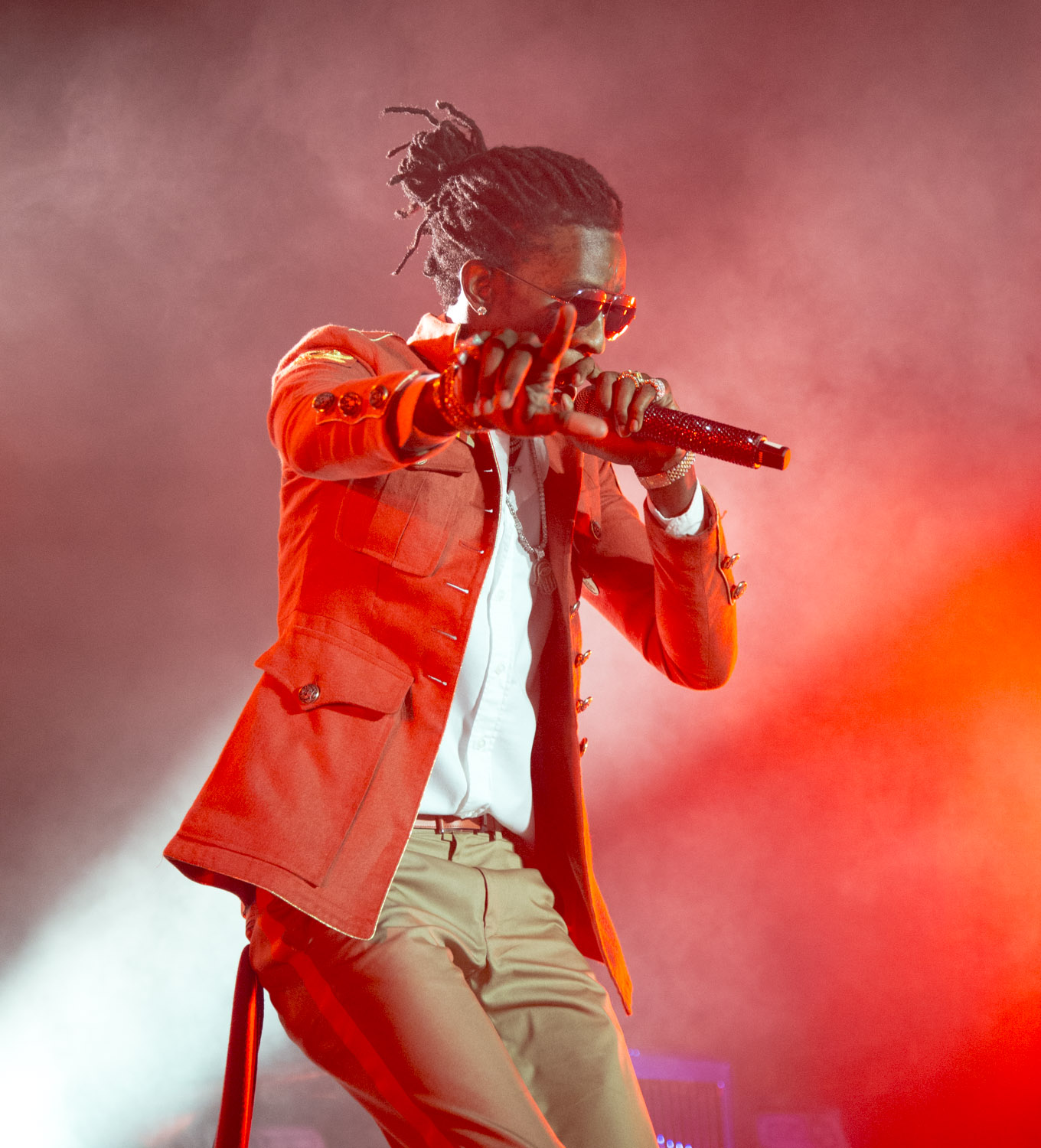 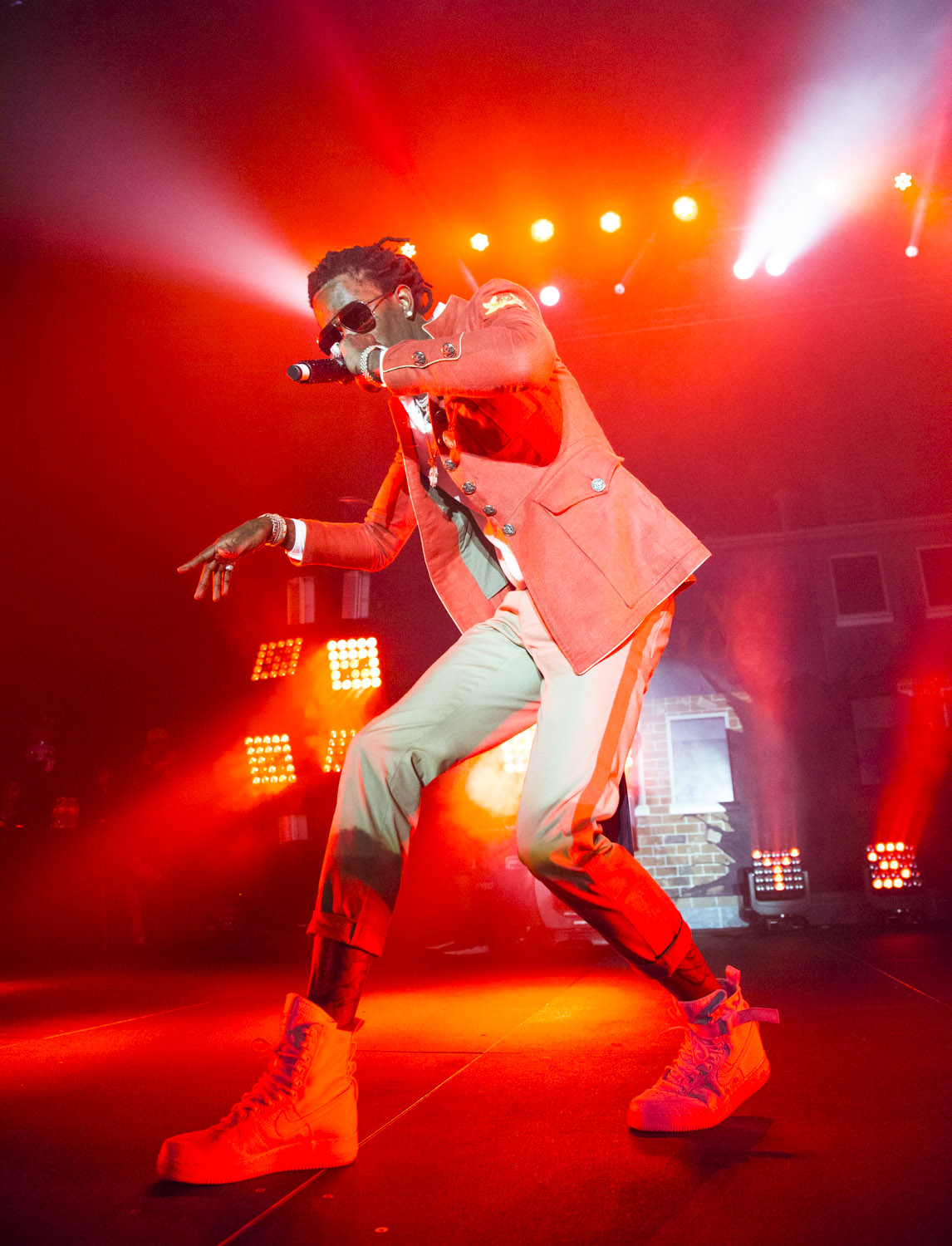 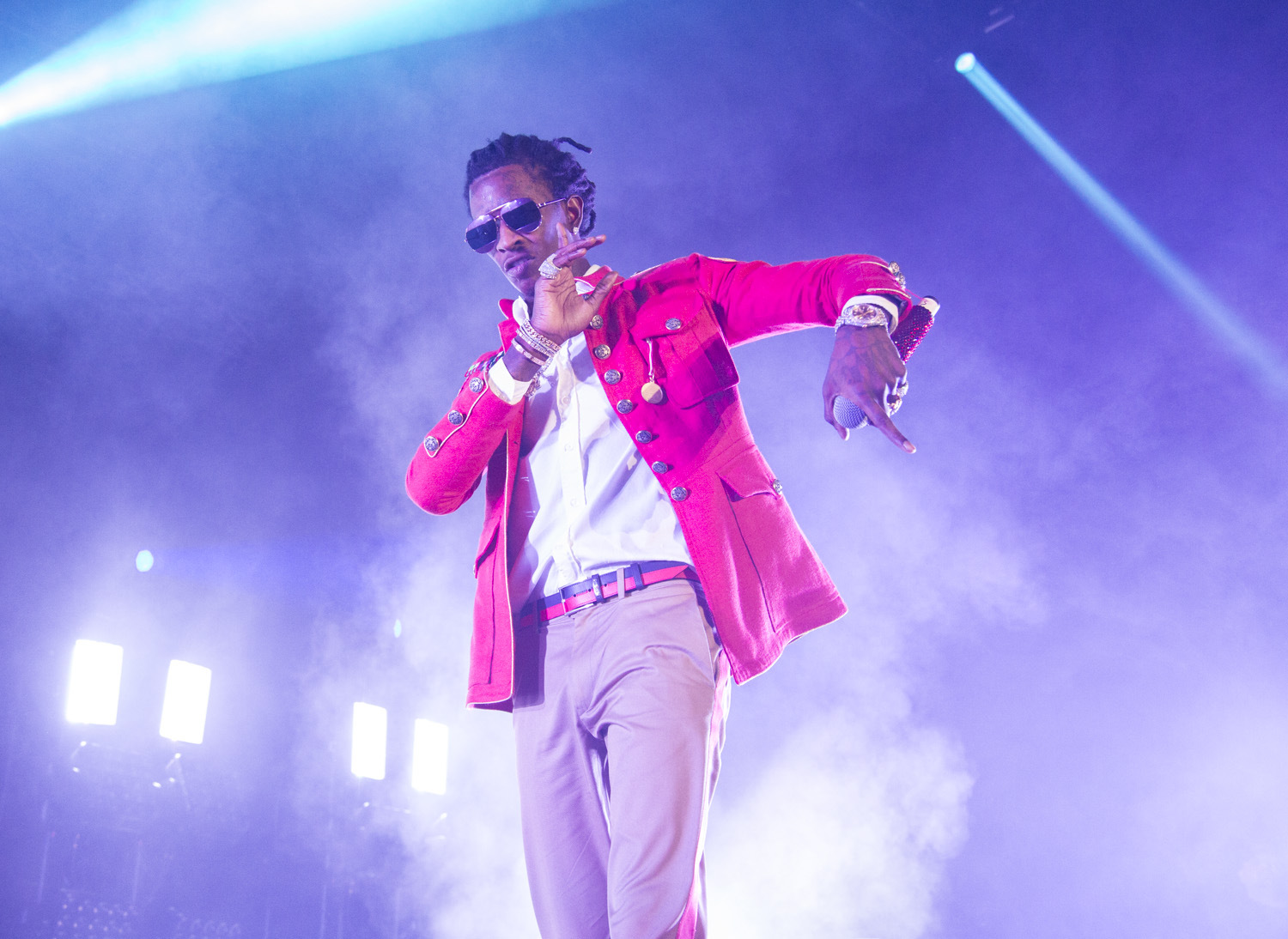 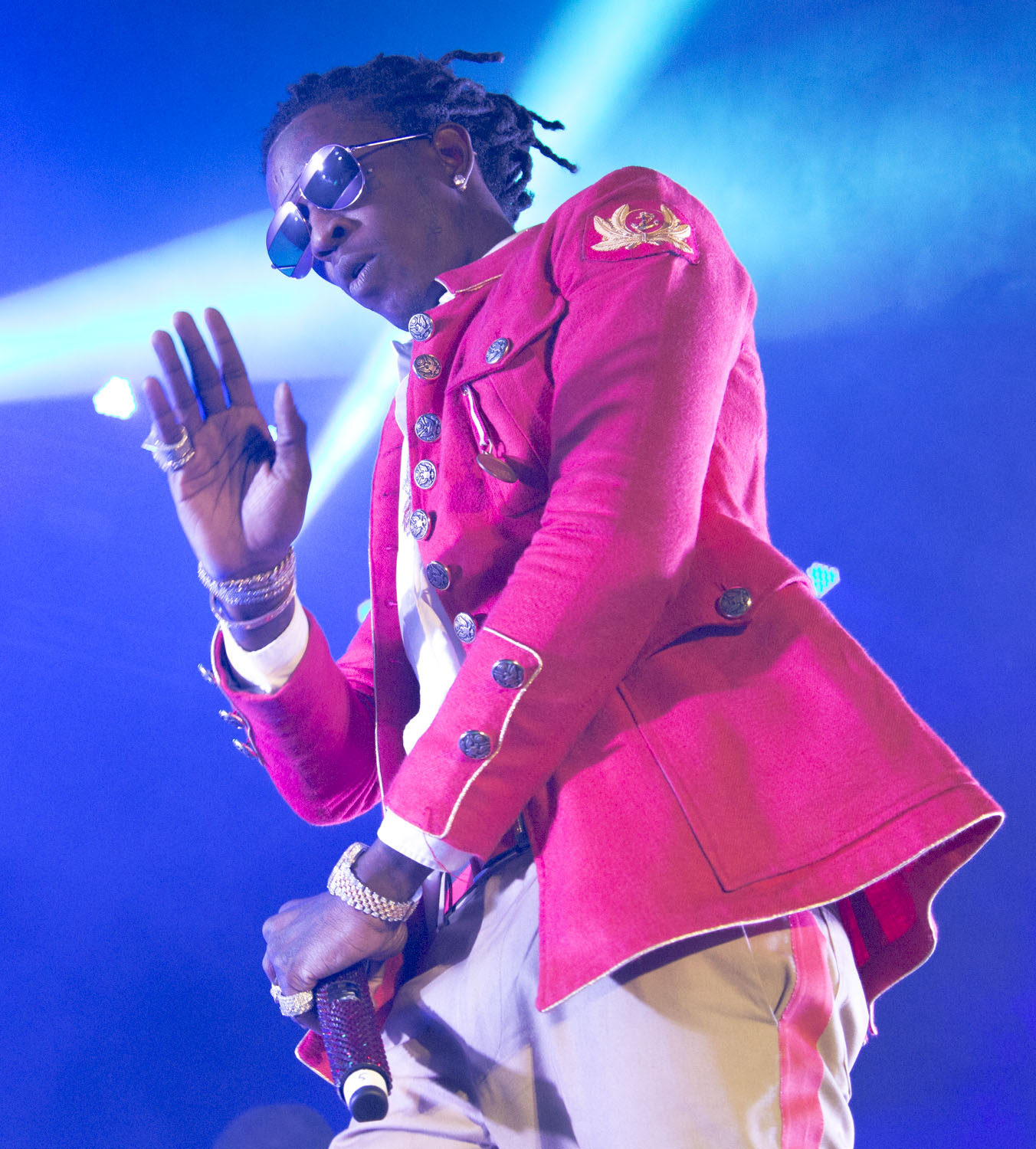 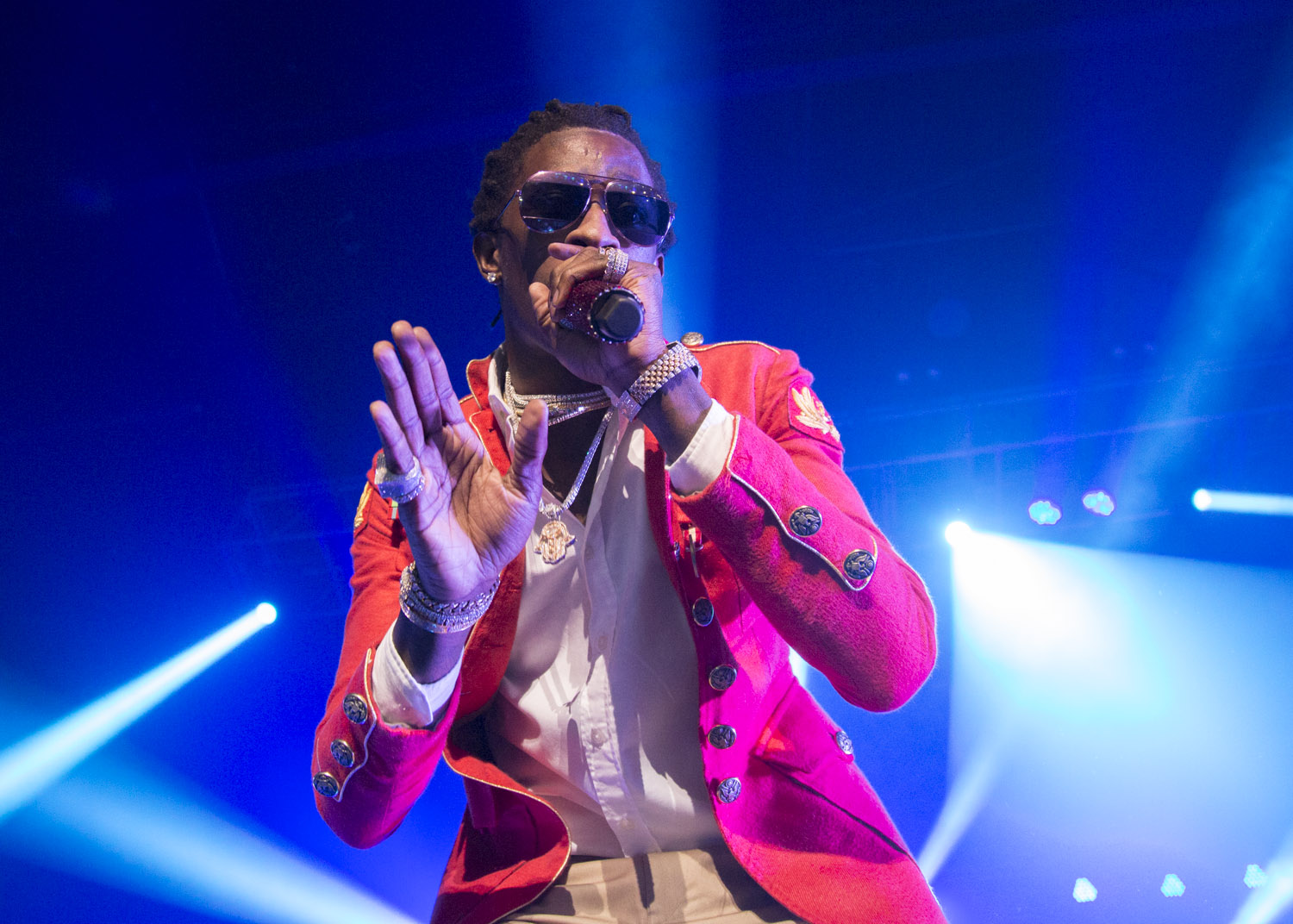 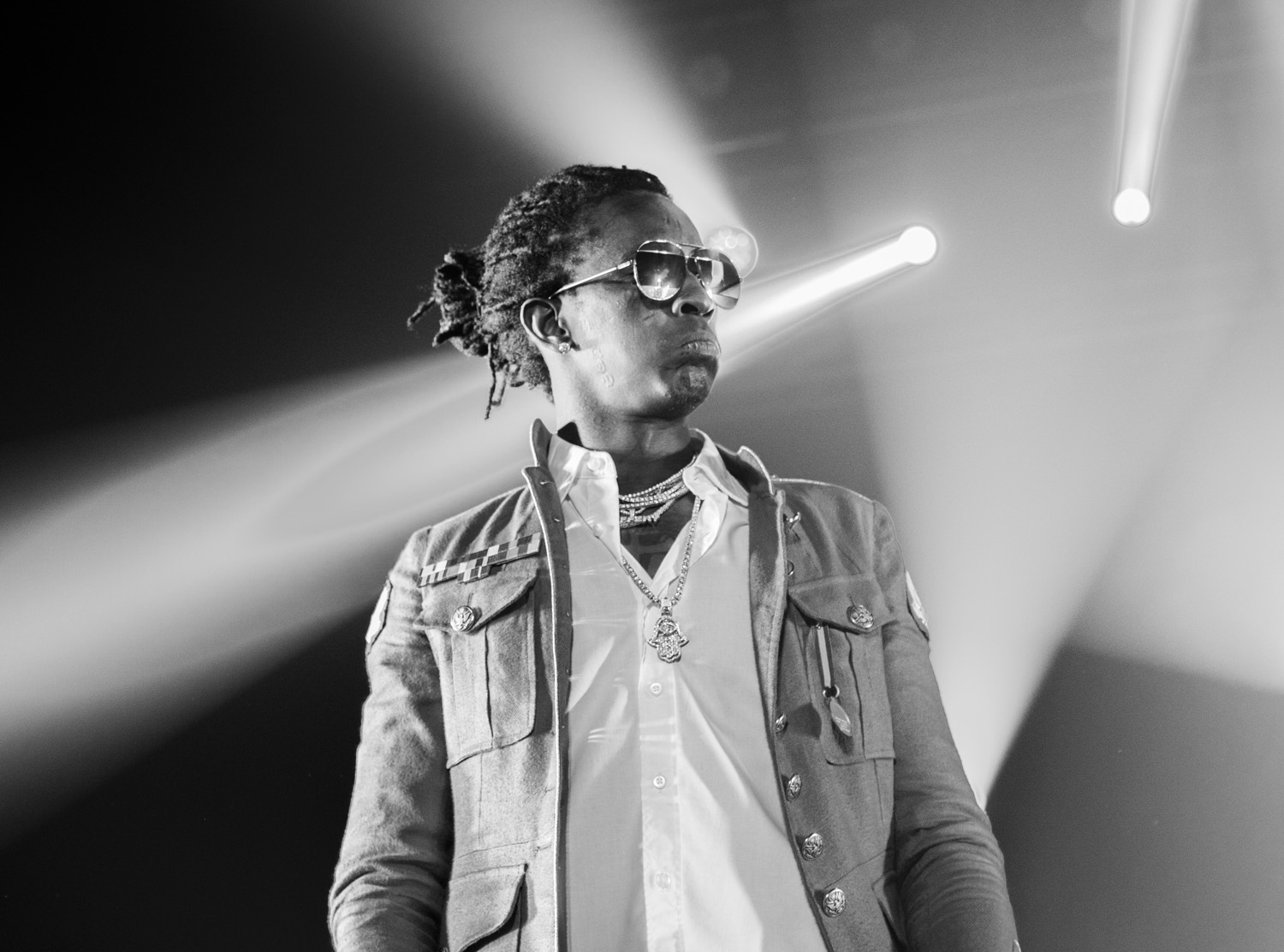 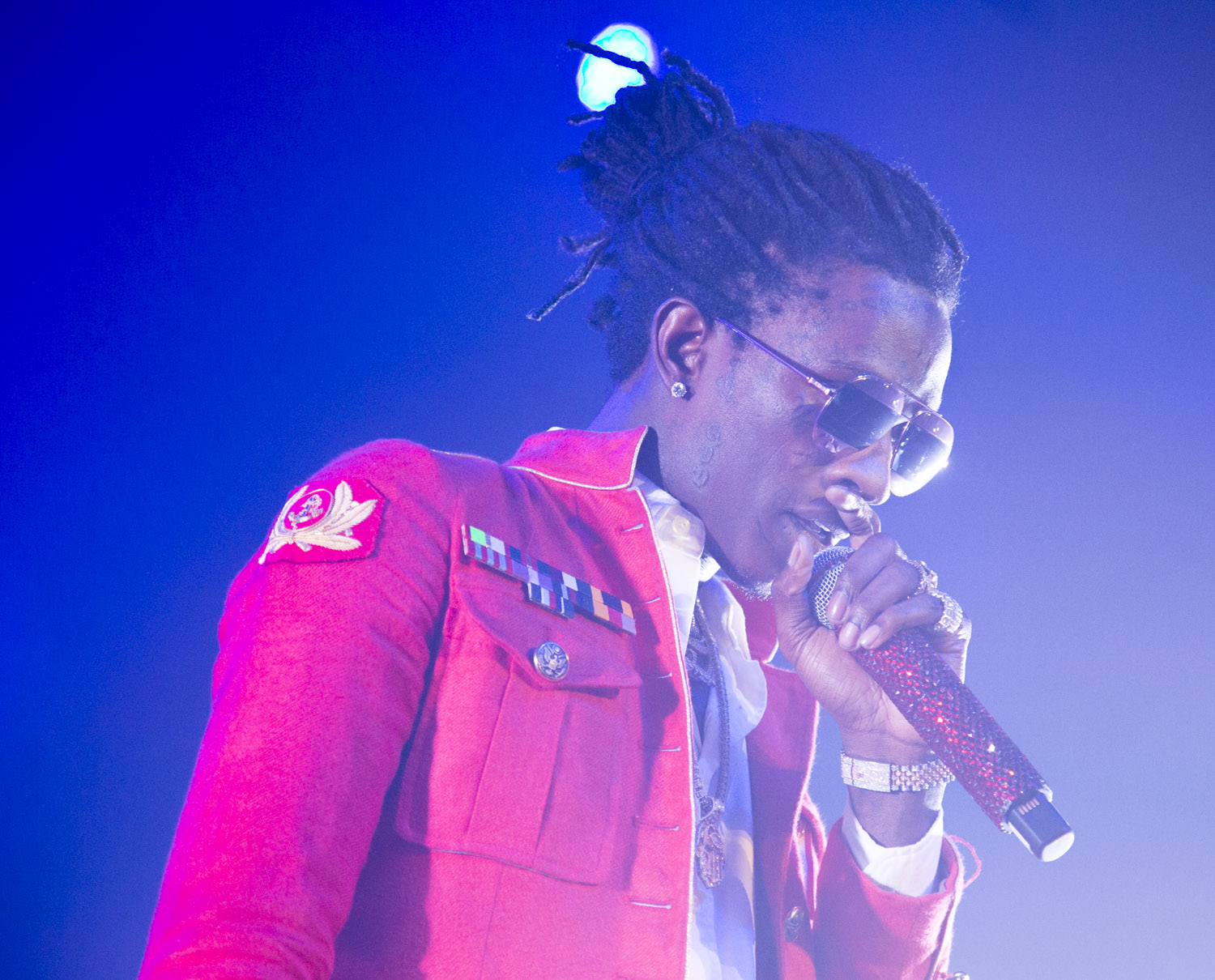 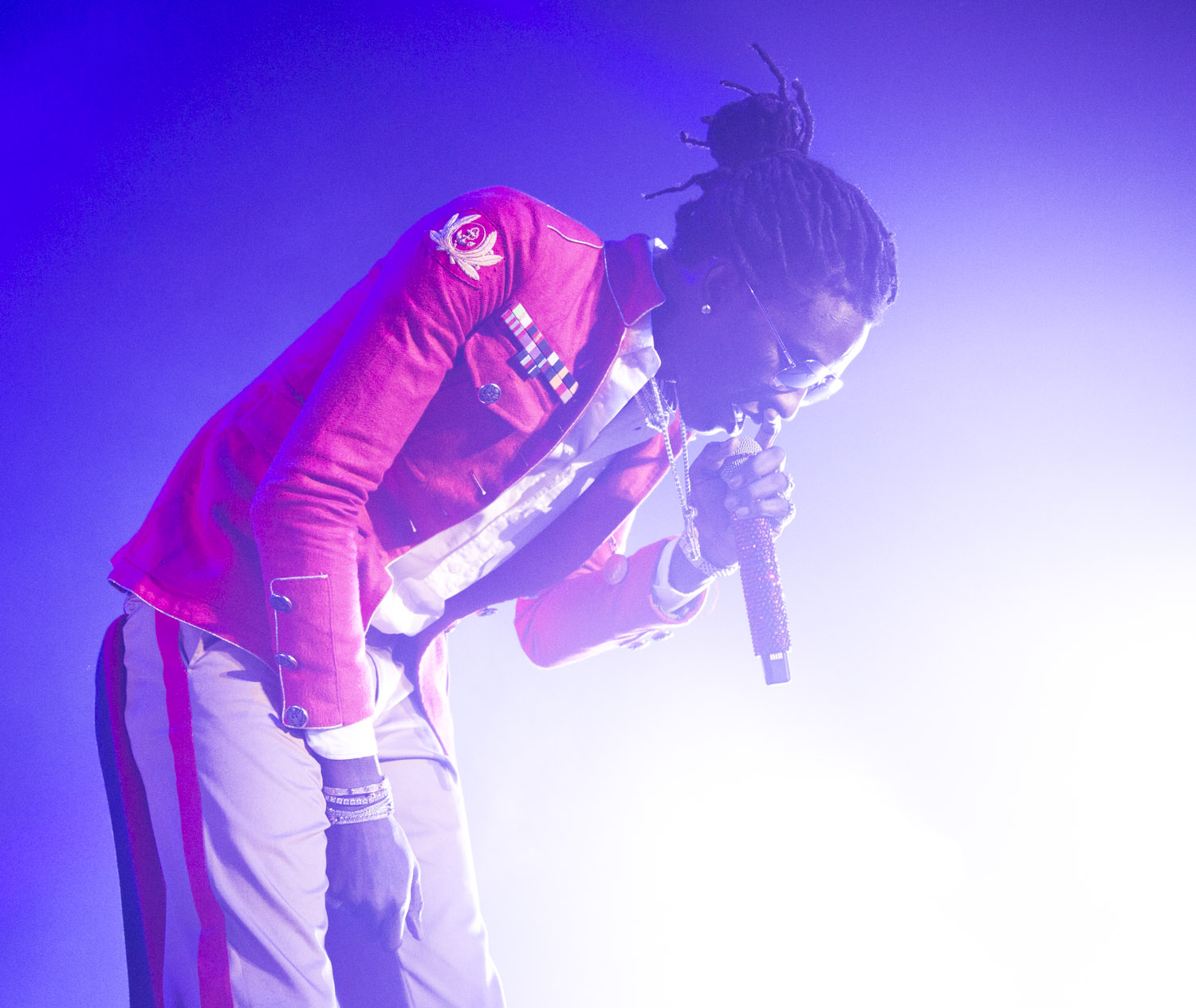 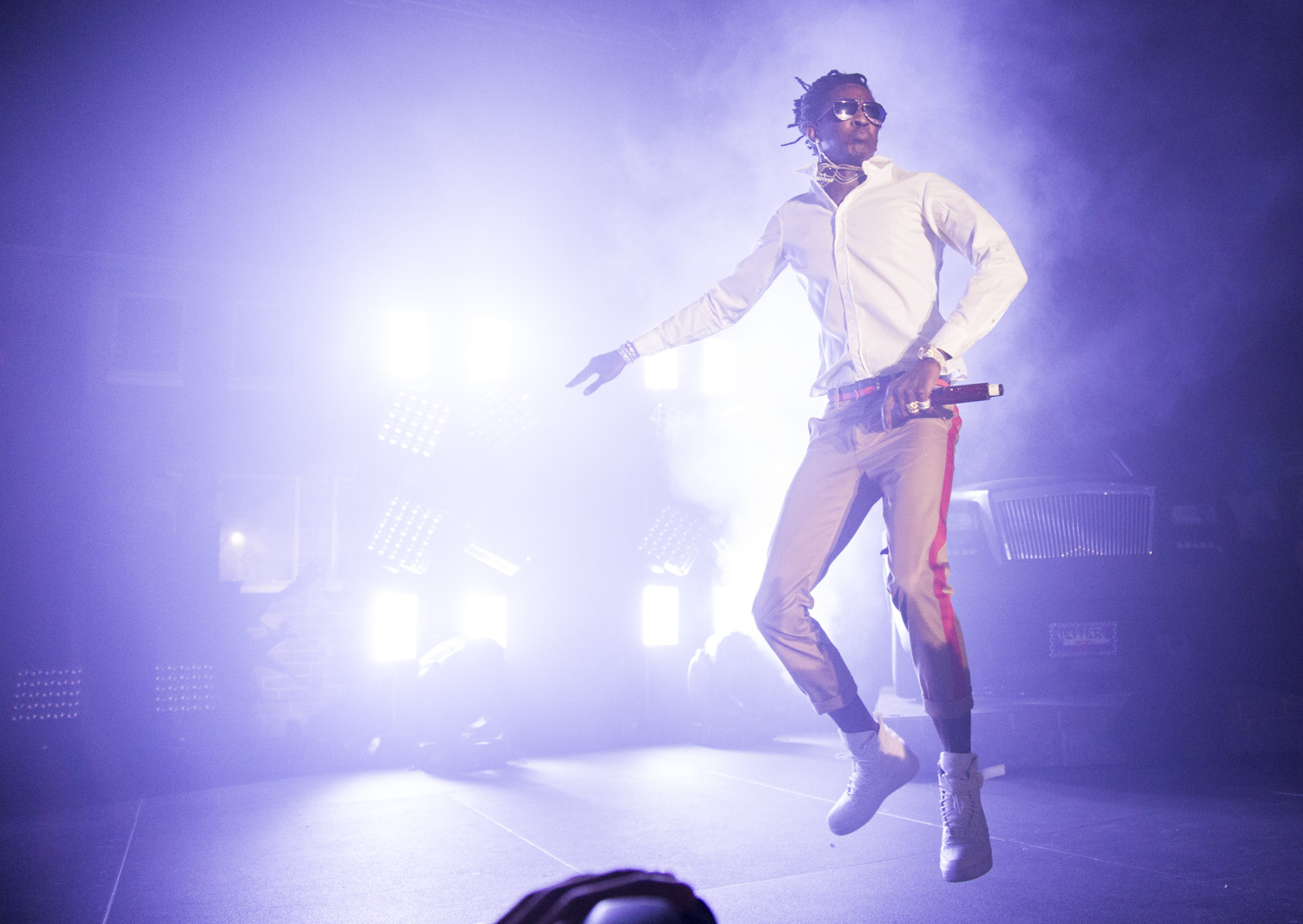 After A Rough Week In The Public Eye, It Was All Love At Young Thug’s Ever-Fashion-Forward Show At The Bomb Factory In Dallas Last Night.

It’s been a stressful December already for Young Thug. Last week, the 25-year-old Atlanta rapper found himself in hot water when he beefed with two female Alaska Airlines employees who he felt were intentionally keeping him from boarding a flight and making his way to a concert on his schedule. He called the women “ants,” “bums” and peasants” and offered them cash to quit their jobs. He would later apologize, both online and in person (at the behest, apparently, of his mother).

Fortunately for Dallas fans of Thugger, though, the rapper had no such trouble making his sold-out Dallas show at The Bomb Factory last night. Better still, the rapper, perhaps inspired by recent events, was sure to present himself in a positive light over the course of that show.

“Everything we do out here is love,” Young Thug told his crowd in Dallas after the first song of his set, following opening turns from up-and-coming star 21 Savage and Divine Council. “It’s all love — love, love, love. It’s everything.”

But is it? In Young Thug’s world, there’s so much at play than just love.

Over the course of his career, Thugger has established himself well as a boundary-pushing performer open to the gender-bending ways of the glam rock musicians and earlier rap luminaries who preceded his arrival on the scene. Like his fellow ATLien Andre 3000 — a comparison endorsed by Andre’s former flame Erykah Badu, who, along with Dallas Cowboys runnig back Ezekiel Elliot, was in the crowd at this Bomb Factory show — the man born Jeffery Lamar Williams has of late earned more than just a few headlines for his unpredictable dress, be it through the donning of women’s clothing or just some other crazy fashionable outfit.

Last night, Thug dressed, at least by his standards, in a rather straightforward manner. He stepped out onto his stage in a red, unbuttoned, Napoleon-esque military jacket, which matched neatly over a white button-up that was tucked perfectly into a tan pair of dress slacks that were cuffed enough at the ankle to not touch his exclusive pair of Nike Air Force 1s. Further draped in diamond, silver, and ​​gold jewelry covering his neck, wrist, and fingers — and at one point rocking a top designed by Dallas designer Charles Smith II — the rapper looked unquestionably sharp in this setting.

It maybe wasn’t as progressive a look as the one he rocked on the album art for his recent Jeffery release, for which he wore a dressed designed by Alessandro Trincone, the Italian designer who designs clothing without regard for gender stereotypes. In that photo, Thugger conveyed capably to the traditionally conservative rap audiences that there’s no shame in wearing whatever the fuck you want to wear without worry about society’s response — an important message, no doubt, even if it has in many ways distracted from his actual music.

Last night at the Bomb Factory, though, Thugger seemed to strike a strong balance between his obvious affinity for spectacle and his obscure, but unquestionably, vocal talents — not so much because his style, while still meant to impress, was muted — relatively — on the occasion of this packed show. Rather, that much was a testament to his improved performance of late. On stage last night, Young Thug reveled in his fans’ adoration while displaying a calm confidence in his performance and erratic vocal abilities.

There’s way more to Young Thug than immediately meets the eye, and last night’s showcase was a testament to the fact that layers of this intriguing performer’s personality are still being revealed.

And that’s something we look forward to continue watching in the years to come.