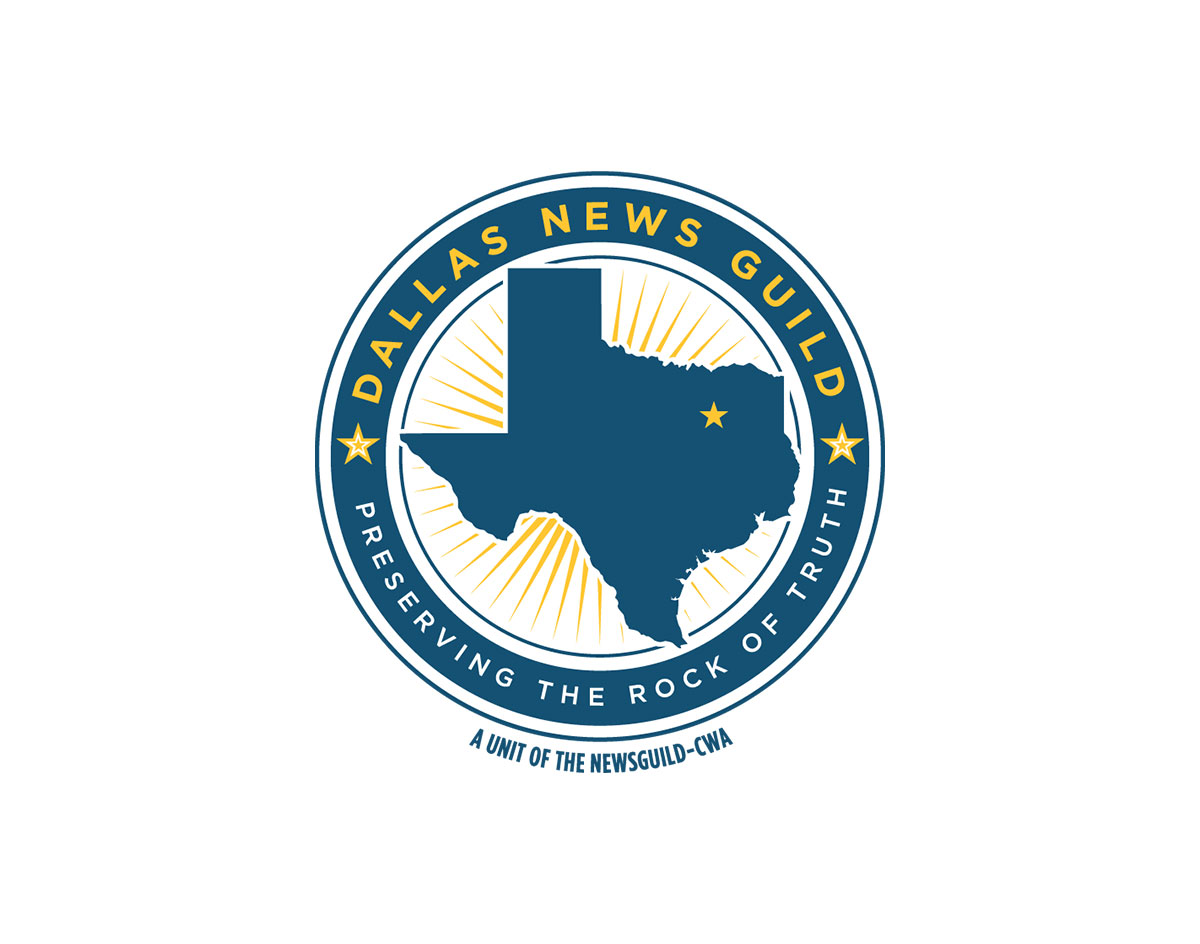 Citing Poor Staff Retention And An Unstable Newsroom, Staffers At Dallas’ Only Daily Newspaper Announced Plans To Unionize On Monday.

Early Monday morning, a majority of the Dallas Morning News‘ 130-plus-person newsroom staff informed management of its intentions to unionize.

The union will comprise staffers of both the DMN and its Spanish-language sister publication, Al Día Dallas.

Together, they’ll be represented as part of the larger NewsGuild-CWA union.

This attempt at unionization comes as newsroom employment figures continue dropping industry-wide. It also comes more immediately in the wake of company-wide coronavirus pandemic-related pay-cuts announced by the Morning News in April.

With the newfound Dallas News Guild‘s formation, managers at the Dallas Morning News and its A.H. Belo parent corporation are now being asked to voluntarily recognize the legitimacy of the upstart organization’s bargaining power.

If recognized, the Dallas News Guild will be the first newspaper union of its kind to form in the “right-to-work” state of Texas since the San Antonio Light, which shuttered in 1993; coincidentally, the term “right to work” is believed to have been coined by the Morning News in 1941.

Union organizers describe “less-than-ideal” career-growth potential, poor staff retention, unsatisfactory severance packages, an absence of pay equity, the dissolution of jobs, an unstable newsroom and a lack of consultation in recent layoffs as chief reasons for their formation, while also citing a desire to “have a seat at the table” in future business decisions made by their employers, who have continued to earn bonuses as newsroom budgets have been cut.

In a press release, organizers said their goal is to “serve as full partners with management to keep the paper strong.” On social media, the Dallas News Guild will use the hashtag #ByDallasForDallas to promote its cause.

While no doubt further fueled by the uncertainties surrounding the coronavirus pandemic, union organizers say their efforts began in the summer months of 2019.

Reached by phone on Sunday, Dallas News Guild spokesperson Cassandra Jaramillo spoke to career stability as a major draw for her inspiration in joining the union.

“I consider Dallas my hometown now,” says the 26-year-old Beaumont native and four-year DMN veteran entrusted with the paper’s public safety beat. “And I want it to be for a long time. I actually cover the Dallas Police Department, which itself has a very robust union. I know the things we’re asking for will make our news product better.”

Co-spokesperson Dave Tarrant, who has worked for the Morning News for more than 30 years, including 27 straight since 1993, cited the paper’s retention of younger talents like Jaramillo as chief among his older colleagues’ concerns when reached Sunday evening.

“It’s extremely important that we continue to have a viable newsroom, and that we have a word in how the paper spends its resources,” Tarrant says regarding his desire to see more investment in journalistic talent that is, in his and his co-workers’ eyes, too often lured toward other opportunities. “I wish we’d done this [as an editorial staff] 10 to 15 years ago.”

In recent years, DMN staffers lucky enough to survive layoffs haven’t just been poached by bigger-pond outlets like The New York Times and Washington Post, but by in-market competitors like the Dallas Business Journal, Texas Tribune, KERA and WFAA, which have been able to hire away the talents Tarrant and his colleagues believe managers have been unable to retain due to corporate budget constraints.

Groundbreaking as the Morning News staff’s unionization attempts may be in Texas, its efforts are reflective of a larger media-wide trend. The newsrooms at traditional print outlets such as The New York Times, The Washington Post, The New Yorker, The Chicago Tribune, The Arizona Republic, The Miami Herald, The Denver Post and The Los Angeles Times are all unionized; the staffs of new media outlets such as Vox Media, BuzzFeed, Vice Media and The Ringer have also all recently done the same. (Not all recent attempts at newsroom unionization have been successful.)

“There’s a reason why papers across the country are unionizing,” Tarrant says. “The pace of change is so dizzying, and some of the decisions are so capricious, there needs to be a union stabilizing it all.”

We have reached out to Dallas Morning News editor Mike Wilson for comment on his staff’s unionization attempts, and we will update this piece with that perspective when it comes. Updated at 3:04 p.m.: In lieu of sharing his own thoughts, Wilson passes along a quote from the A.H. Belo Corporation, which owns the paper. The statement is credited to DMN publisher Grant Moise, and it reads as follows: “We are taking the [union] letter under advisement. It’s our privilege to provide a world-class news report to the people of North Texas and we will continue to do so.”

You can read the Dallas News Guild’s announcement press release here, and its mission statement in full below.

For decades, the stone facade of The Dallas Morning News headquarters proudly broadcast the newspaper’s virtues and goals. Through the Rock of Truth, we pledged to honestly and accurately inform our community, doing so with integrity and fairness to all.

It is in this same spirit that we, the employees of Al Día Dallas and The Dallas Morning News, are forming a union as part of the NewsGuild-CWA.

North Texas deserves a news organization representative of its community, one that strives to hold power to account, tells its people’s stories and reports on the news and culture that make our beloved Lone Star State feel like home.

We take immense pride in having the opportunity to serve our community. But The Dallas Morning News as an institution fails to truly fulfill its promise and duty to readers when experienced colleagues are lost to layoffs or disillusionment, employees struggle for pay equity, and young talent has no clear path forward.

We understand that our industry is in turmoil. This tumult has resulted in no-raise promotions, increased work without increased income, staffing cut to the bone and, most recently, an across-the-board reduction in pay. The current situation is untenable. By uniting, the employees of Al Día Dallas and The Dallas Morning News seek to work with management to build a more stable and secure environment so that local journalism can thrive.

We have served North Texas for nearly 140 years, and we are excited to do so for many more to come. The employees of Al Día Dallas and The Dallas Morning News are committed to creating a talented, vibrant newsroom that covers each facet of our community in a meaningful way. We believe management is dedicated to this same goal. Through a united workforce, we can create the equitable, representative and profitable conditions we need for all of us to succeed.

We ask A.H. Belo, the parent company of The Dallas Morning News, to recognize the NewsGuild as our representative. By doing so, A.H. Belo and management will show continued respect for its workforce, establishing a new foundation and framework that we can all use to reach our goals.

We are the reporters, photographers, copy editors, researchers, engagement professionals, artists and designers. We are the sports, breaking news, arts and entertainment, editorial, local news, visual team and copy desk.

We are Al Día Dallas and The Dallas Morning News.

We are stronger together.