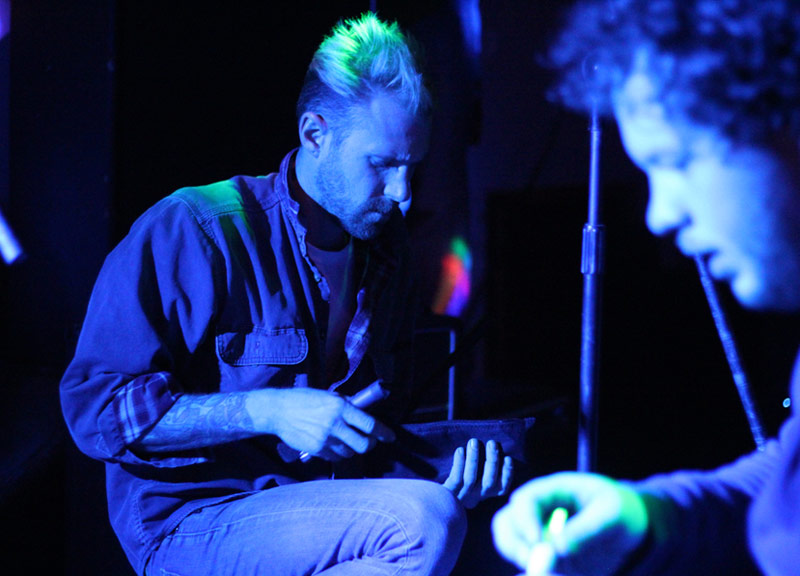 Behind The Scenes at South by Southwest with Fort Worth's Ice Eater.

In the lead up to this year's South by Southwest, there existed plenty of banter about whether the festival had finally jumped to proverbial shark; whether the giant Doritos-themed stages, free Taco Bell and shows that gave entry preference based on your smartphone of choice were finally too much.

This article isn't about that.

No, this is about the great bands that still spend a long weekend in Austin each year because there are shows to play, and playing shows is what bands do. For these bands, there remains a chance, however fleeting, that something could happen as a result of the festival.

“It's the most important thing of the year, give or take,” says Zach Edwards, guitarist for Fort Worth's Ice Eater. “At least in our small realm, it's the best thing we've got going on right now.”

This isn't to say that Edwards or any of his bandmates — drummer Wyatt Adams, bassist Brad Cannon, frontman James Jardine and keyboardist Jordan Kline — necessarily believe in the magic of the festival. They just think it's a thing you need to do if given the opportunity.

“Personally, I think it's a bunch of horseshit,” Edwards says. “It's just a big music festival.”

It's an opportunity and a responsibility. And, on the Friday before SXSW, Edwards felt it heavily.

“I've just been focusing on making sure we get there and stay alive,” he says. “Those boys [in my band] party hard. I try to keep my sensibilities.”

That's Edwards' role in Ice Eater beyond his guitar play. He's a chaperone of sorts for a band that is almost as good at drinking beer and smoking weed as it is at creating layered, loud, just-poppy-enough rock songs.

By the following Wednesday, when we finally meet up in Austin, Ice Eater has successfully traversed I-35 and made it to Sixth Street.

The five-piece is sitting around before its show — a moment that could happen anywhere. There are Lone Stars, shots of rail whiskey and frequent smoke breaks. They smoke maybe a few more cigarettes than they did at Lola's a couple of nights before, but everything else is fairly routine. They watch the two bands that go on before them, worrying about the size of the stage and the fact that it looks like they will be performing in what can best be described as a hallway.

Lit Lounge, like many of the places that host lower-profile showcases, isn't much of a venue. It seems to be hosting this thing just for the banner, the one that says “Official SXSW Venue” behind the stage.

Going first is Austin-based singer-songwriter Pink Nasty and, for whatever it's worth, she is what she is. She's got a decent hometown crowd, and her set isn't awful, if a little generic. The only thing that makes her stand out is the way she lives up to her moniker. Throughout her performance, she goes after the sound guy, whether abusing him herself or inciting the crowd to lob some invective in his direction. Given the tough circumstances, it really isn't cool — and Adams and Edwards say so.

You can tell, however, that the sound issues that Ms. Nasty is protesting have Ice Eater a little worried. Everything has to be perfect — or at least close to it — for the band's wall of sound to come off well. Before the fest, Edwards was worried about the truncated soundchecks that SXSW's six-band lineups necessitate. Now, it seems like time may be the least of the band's issues.

The second band on the bill is more interesting than Pink Nasty. L.A. is a Spanish indie band that features English language lyrics — and they bring it. This isn’'t a band that thinks SXSW is past its sell-by date or one that figures they may as well do a set just to get their artist wristbands. L.A. is here to do the best they can, because there are probably a few people here who didn't know they existed three hours ago.

The crowd appreciates the effort. The band feeds off the room — maybe a little too much, far as Ice Eater is concerned. L.A. gets a late hook and manages to play about 15 minutes past its scheduled 9:40 p.m. end time. By the time Ice Eater gets to begin tailoring the tiny performance space to its needs, it's closing in on 10 p.m..

They get to it, diligently putting their setup together, and manage to get things going decently close to their listed set time. Everything sounds good, too. The only readily apparent difference between this and a typical Ice Eater show is that Jardine spends even more time than normal in the crowd. There simply isn't enough room for him onstage. Well, that and he manages to keep his whole outfit on throughout the performance, which is otherwise something that basically never happens.

It's a constant source of amusement for the band, the fact that its frontman, for all of his unpredictability, can always be counted on to cast off the constraints of his shirt. When he doesn't, it's a source of consternation — like the time when Kline had a bet with somebody in the audience about how long into a show it would take for someone in his band to take their shirt off, and how he eventually ended up having to do it himself just to win that wager.

So, Ice Eater comes on — at this point, most of the crowd has cleared out, as you'll see at a lot of SXSW showcases — and does its thing. Adams, Cannon, Edwards and Kline are tight, exactingly weaving Ice Eater's soundscape. Jardine is doing his best to work up the full, messianic frontman, here-to-save-us-all-from-our-dreary-lives thing that he does so well.

They don't get much help from the crowd — not at first. Nevertheless, the band keeps going, turning in the same sort of performance that they've turned in all over DFW in the last year or so. No alternative media personalities get their lip busted open by a PBR can but, by the time the venue's sound finally craps out on them in the midst of the last song on their setlist, the band seems pretty satisfied.

The performance is over but, much to their growing chagrin, the band has agreed to let the last act on the bill, Dutch electro-dream popper Sofie Winterson, use their drum kit. Meaning? They'll be stuck at Lit Lounge until at least 1:30 a.m., the purple artist wristbands languishing on their wrists.

Next I hear from them is about 36 hours later. Edwards texts me that the band has finally managed to pick up what has become something of a dying breed at SXSW — a last-minute unofficial show.

“I think this is my 12th year [going to SXSW], but it's my first time as an official artist,” Kline says. “I've seen it evolve from the way it was then to the way it is now.”

The way it is now is a lot less DIY and a lot more house parties and unannounced shows getting shut down, Kline says.

“Friends of mine had shows set up, and the city wouldn't pass the noise ordinances if it wasn't an official South by thing,” he says.

Before the festival, Edwards and Kline had hoped they might get three or four such shows. Now, on Friday, the next-to-last day of the fest, it seems that they might finally be picking up their first one. It's on the East Side, and I need the address. As I'm writing my reply text to Edwards, my phone buzzes, the show's been shut down and Ice Eater is done performing for the weekend. But that doesn't mean they're done working.

A couple of hours later, I get another text: Adams, Edwards, Jardine and Kline are wandering around downtown and have a story to tell. I'm waiting in line at the Spotify House to see Real Estate. When I tell them that the day party venue has an open bar they decide to join me.

After they get to the lime green house and cycle through the bar line a few times — Jardine, if I counted correctly, had five Miller Lites in about half an hour — the story begins to spill out. They had gone to a panel at the convention center for publicists. Their goal? To try to find a publicist.

To this point, Edwards has handled all of Ice Eater's publicity. He answers all emails sent to iceeaterband [at] gmail [dot] com from his iPhone directly, and does his best to accommodate any and all media interest in the band. It isn't a job something he relishes, but he does his best to do what needs to get done. Of all that he hoped to accomplish at SXSW, finding a publicist to take the band on — and off of his shoulders — was at the top of his list.

So the band goes to this panel and it is made known, after they ask a couple of questions during the Q&A, that they are crashing what is, apparently, supposed to be a private event. This event, a particularly helpful gentleman pipes up, is for the members of a publicists' email group. Ice Eater, as a collective, looks very much like a band. Not even the coolest publicists at SXSW look anything like these guys.

Message received, the band heads out of the panel, but not before a few of the industry types there ask for — and get, thanks to Adams, a couple of cards with download links to the band's 2013 full-length Don’t Care.

As Ice Eater's members tell their tale, Real Estate begins to play. Adams wonders aloud (and with good reason judging by this lackluster offering of a set): “Who listens to this shit?” He then tells me about how great Sofie Winterson — the act that needed Ice Eater's drums on Wednesday — was. I promise to check out if she has any more shows the next couple of days.

With that, the guys leave, but not before a Sonic Youth koozie Kline bought at the conference's print show meets an untimely death in a port-a-potty accident that may or may not have been Jardine's fault.

It's the last I see of the band at SXSW. By Saturday morning, Ice Eater is on its way back to Fort Worth, having only played the one show in the end. 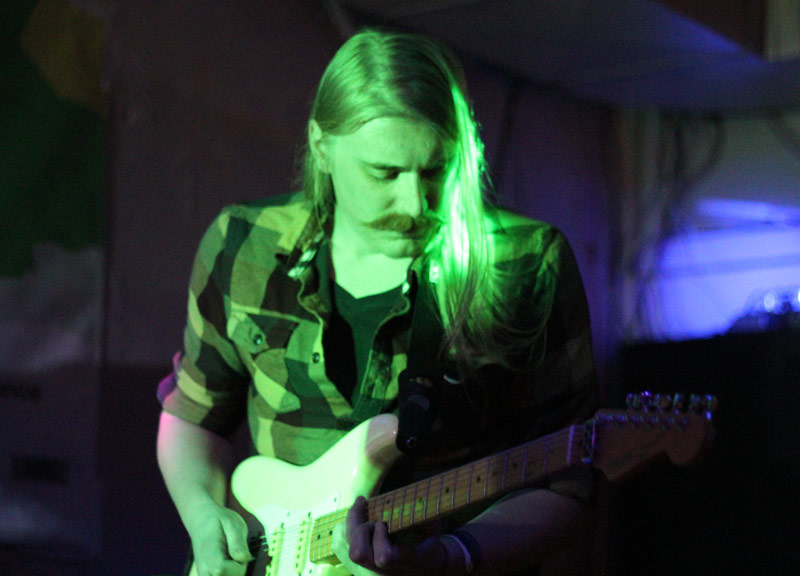 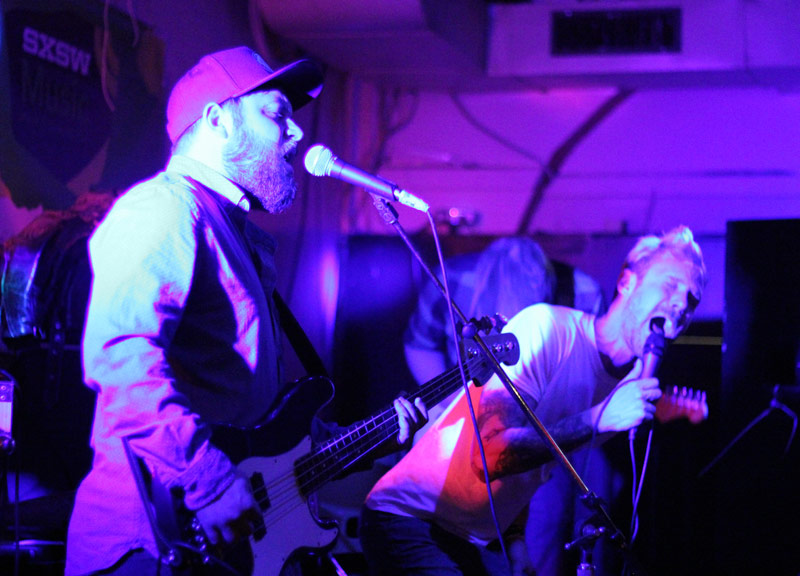 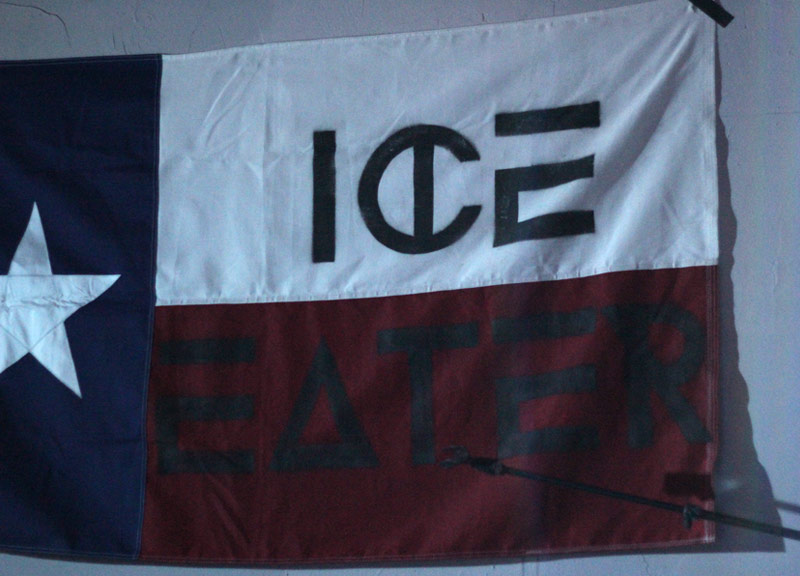 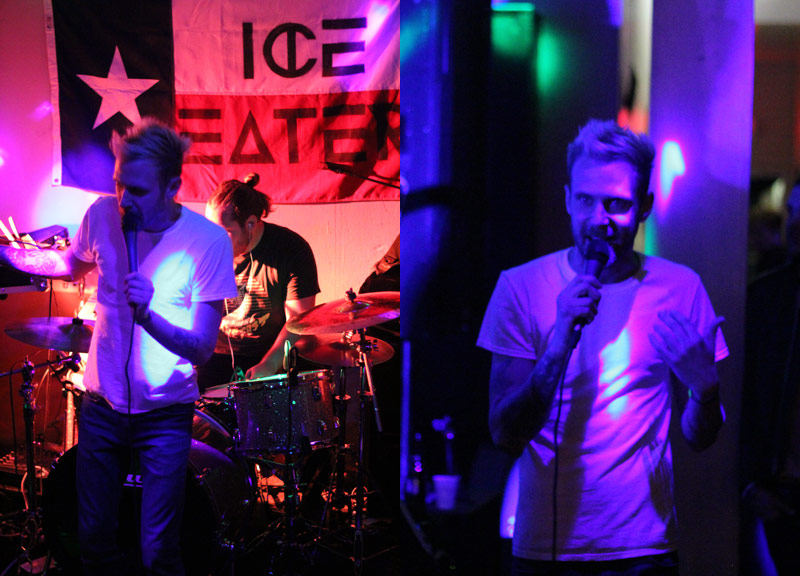 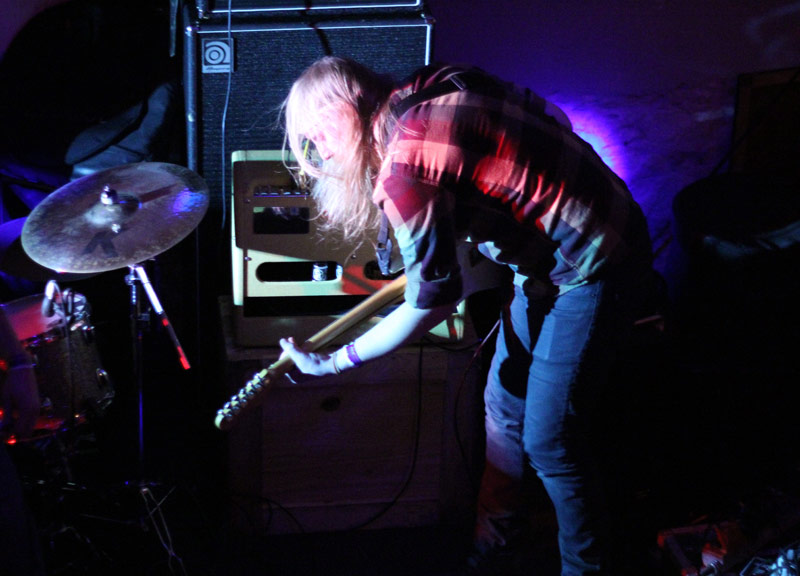 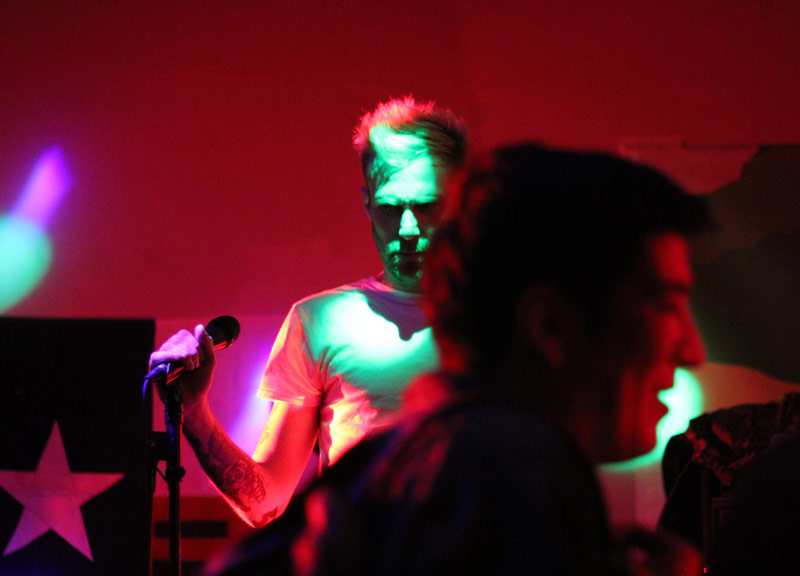 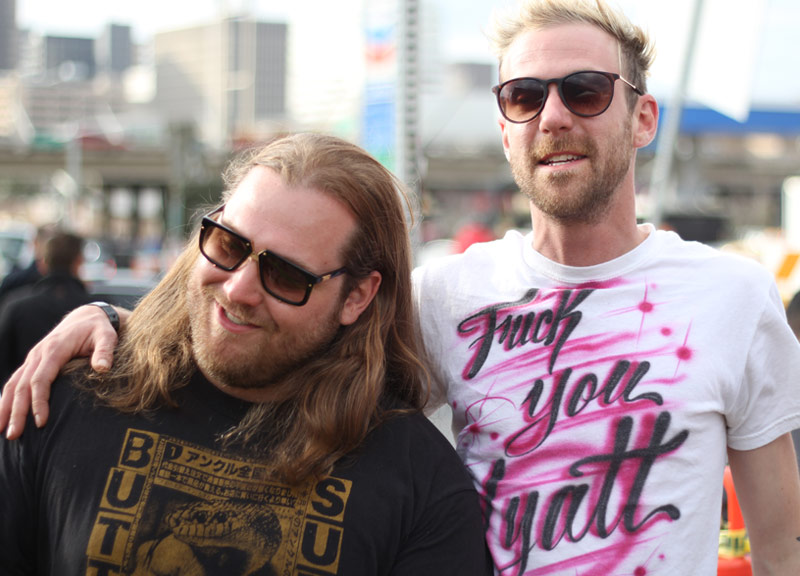