Check Out This Fucking Pirate Musical. 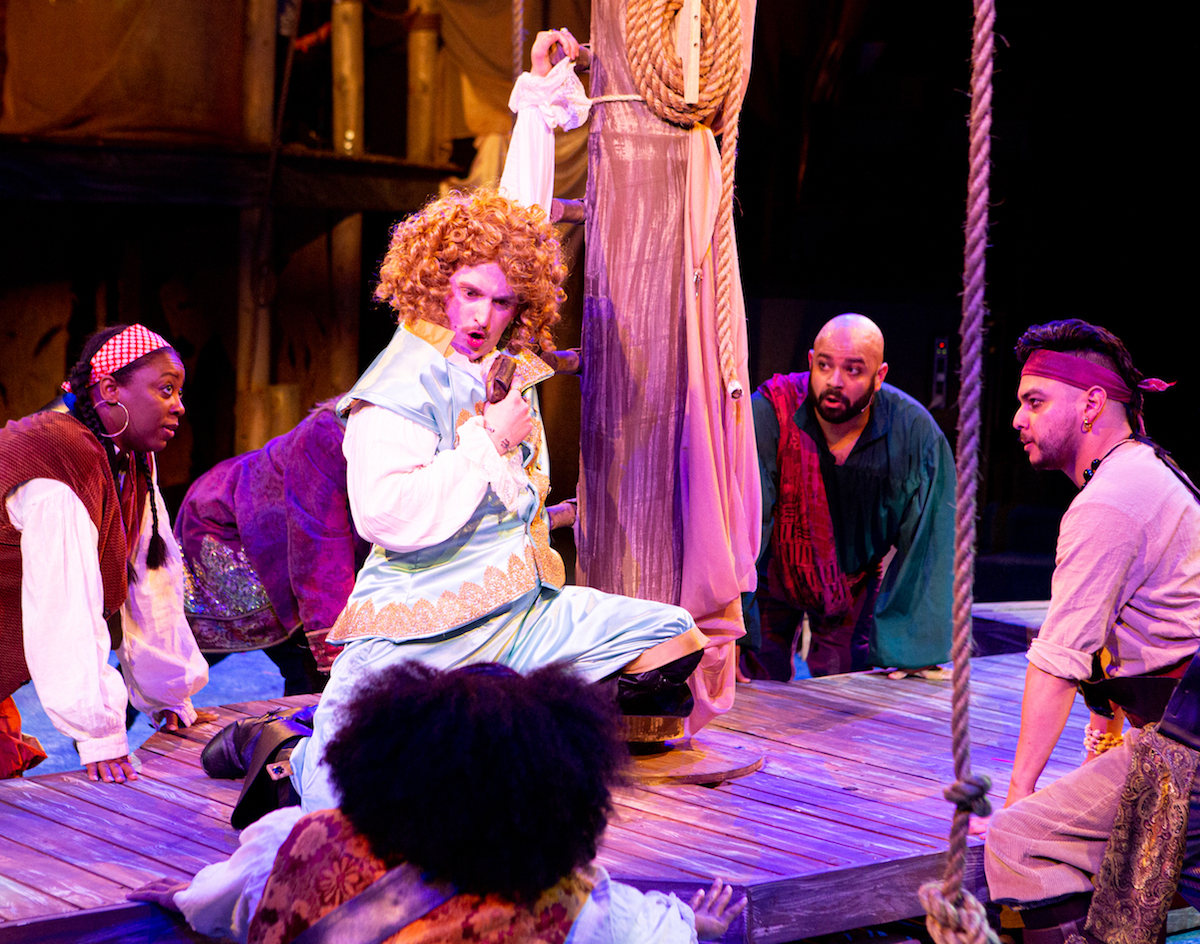 Avast Ye: The Hype Around Theatre 3’s Stede Bonnet: A Fucking Pirate Musical Is So Real That People Are Traveling To Dallas To See It.

It was a dark and stormy night — actually, it was a very pleasant 78-degree and cloudy evening — and we were at Theatre 3 in Uptown to see Stede Bonnet: A Fucking Pirate Musical, which is now on the last weekend of its world premiere run.

With about a third of the audience dressed up in pirate garb, it was clear that this musical had a certain special following.

The show is a true-ish story based on the real-life figure of Stede Bonnet, a sugar plantation owner who left his family behind to become a pirate in 1717 — despite having no real piracy skills. With his wealth, a full library onboard and the wild fact that he paid his crew a wage and legally bought his ship, he was dubbed “The Gentleman Pirate.” Eventually, he crossed paths with the infamous Blackbeard and the two worked side-by-side for some time.

Stede is an insanely fun show with a stellar cast that really nails all aspects of their craft. An additional layer of fascination is how its production coincidentally coincided with the success of HBO Max’s Our Flag Means Death, a 2022 comedy series that is also inspired by the very same story. 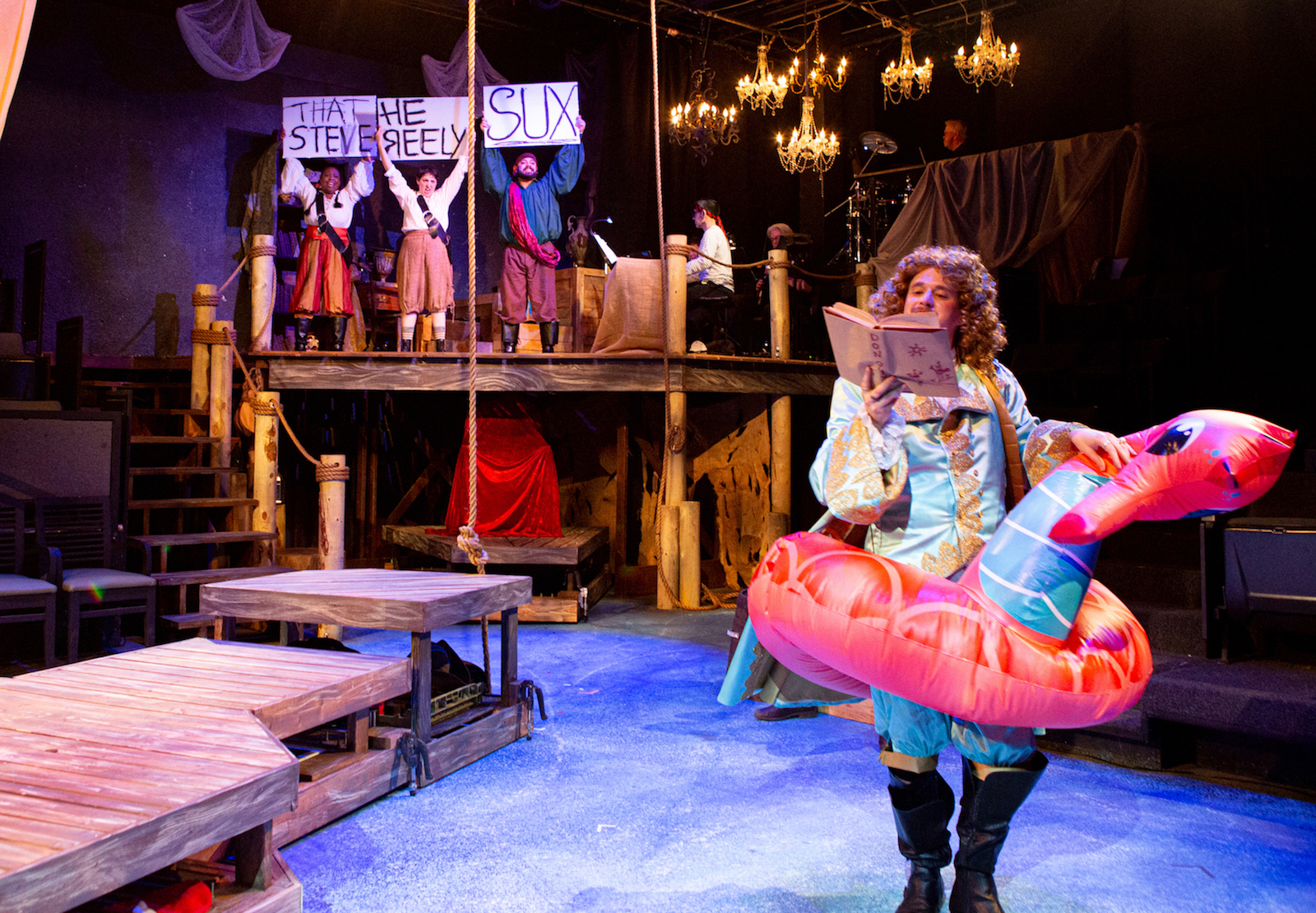 For multiple weeks in a row now, even after its season one finale, Our Flag has continued to be the most in-demand show, thanks to its extremely dedicated and outspoken fanbase. With all the buzz and fan-created content swirling around online, Stede also managed to get some of that attention, mainly via TikTok. So much so, that some fans have flown in to see this small-scale production.

“I’ve worked in Dallas for a very long time,” writer Nicole Neely says, “And I have never experienced anything like that.”

Talk about luck. Not to say the musical wouldn’t have found love on its own, but an obsessed fanbase sure does help.

Initially, some may believe this production is just riding off the Our Flag craze, but Neely conceived the story back in 2019 after learning about Bonnet’s life in the “I Am Not A Pirate” episode of the podcast This American Life. In fact, Neely and director/choreographer Danielle Georgiou have held off watching the series until now so as to not let it influence their creative choices.

Like the musical, the television show follows Bonnet, Blackbeard and his second-in-command Israel Hands, but the respective portrayals take different directions. While both embrace the comedic, campy side of pirates, Our Flag mainly focuses on a budding romance between Bonnet and Blackbeard, while Stede is a story of grief, revenge and redemption — and included a new, fully fictional female character, Elsie Ormond, of who half the show revolves around.

“What first resonated for me was this idea of how grief is a strange motivator,” music director Danny Anchondo Jr. says. “And in this time that we’re in right now, it felt very topical, because we just aren’t always cognizant of the grief that everyone is going through.”

This theme of grief stems from the real-life Bonnet having lost a son shortly before running away to his new life. The crew behind Stede has fully leaned into that as a story motivator, which is absent from HBO Max’s take.

“So many people relate to pirates, or find them entertaining and comforting,” Georgiou says. “When you’re having a serious conversation about grief, tragedy and death, to do it through that lens helps a lot of people feel more comfortable to have those conversations.”

“Pirates are like the peanut butter that we hid the medicine in,” Anchondo adds. 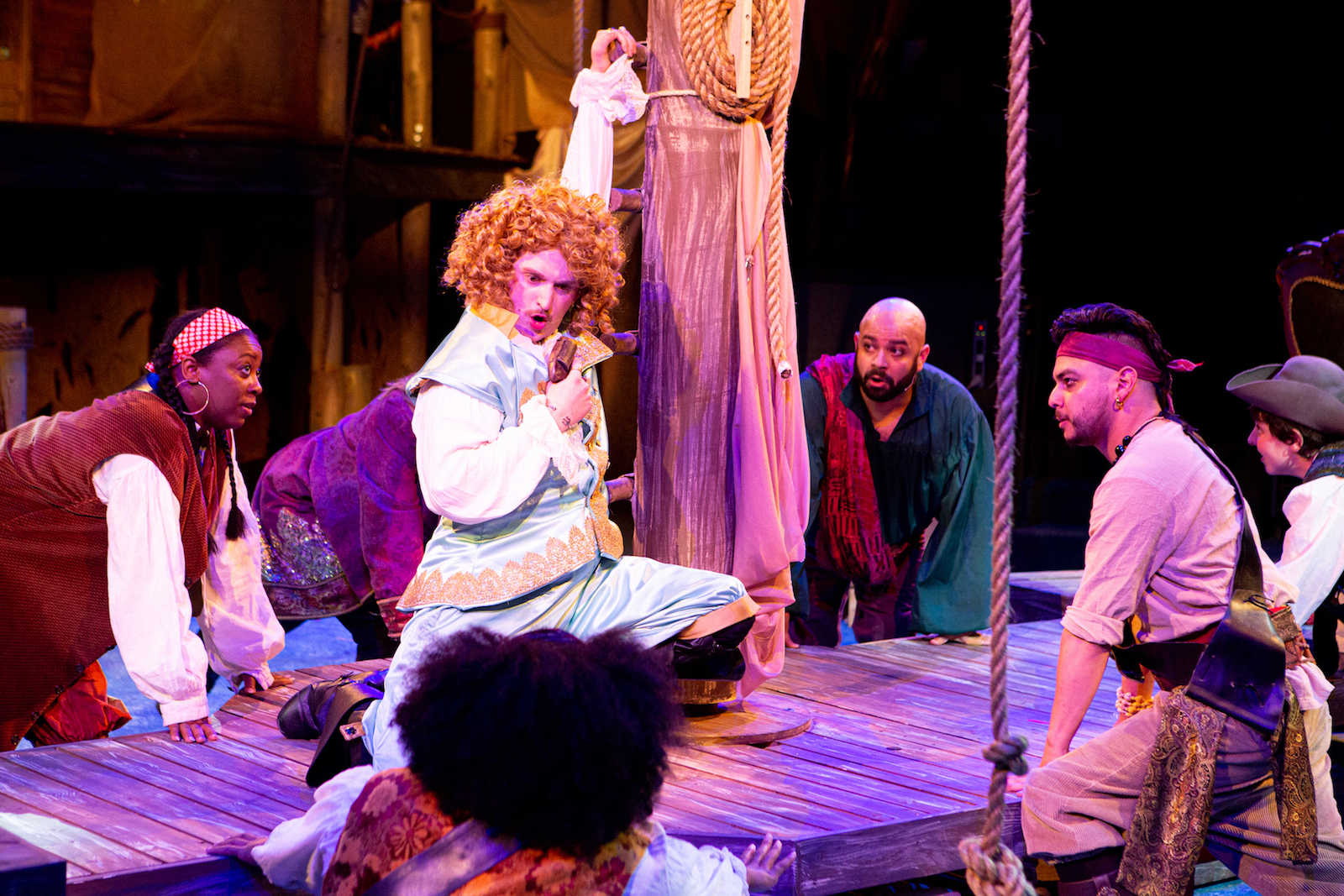 It’s also interesting to see the separate characterization of Blackbeard. In Our Flag, we see a more golden-hearted portrayal of the pirate (masterfully played with a lot of charisma and sensitivity by Taika Waititi), while in the musical, he’s the sinister and selfish villain because, well, he was a pirate after all.

The mythologized figure that is Blackbeard has always served as a harsh symbol of stereotypical masculinity (as does most of pirate media), so it’s refreshing to see Our Flag create both a queer and emotionally vulnerable version. Stede also creates a twist on the character, but in a different way. In an unexpected turn of casting, this version of Blackbeard is played by a female actor, Laura Payne, who does a phenomenal job.

Payne says creators Neely and her husband/the show’s composer Clint Gilbert have always intended the role to go to a woman and to include women in the cast of swashbucklers.

“I wasn’t particularly interested in playing ‘man’ in my physical journey and neither was our director, Danielle,” Payne says. “We liked the idea of Blackbeard reading as more androgynous — more drag-y.”

Instead of focusing on being “manly,” Payne aimed for control and power while developing her physicality.

“Blackbeard never apologizes for being in a room,” Payne says, “As women, we naturally make ourselves smaller, so I worked hard to take up as much space as possible when onstage — It doesn’t hurt that I’m the tallest in the cast [either].” 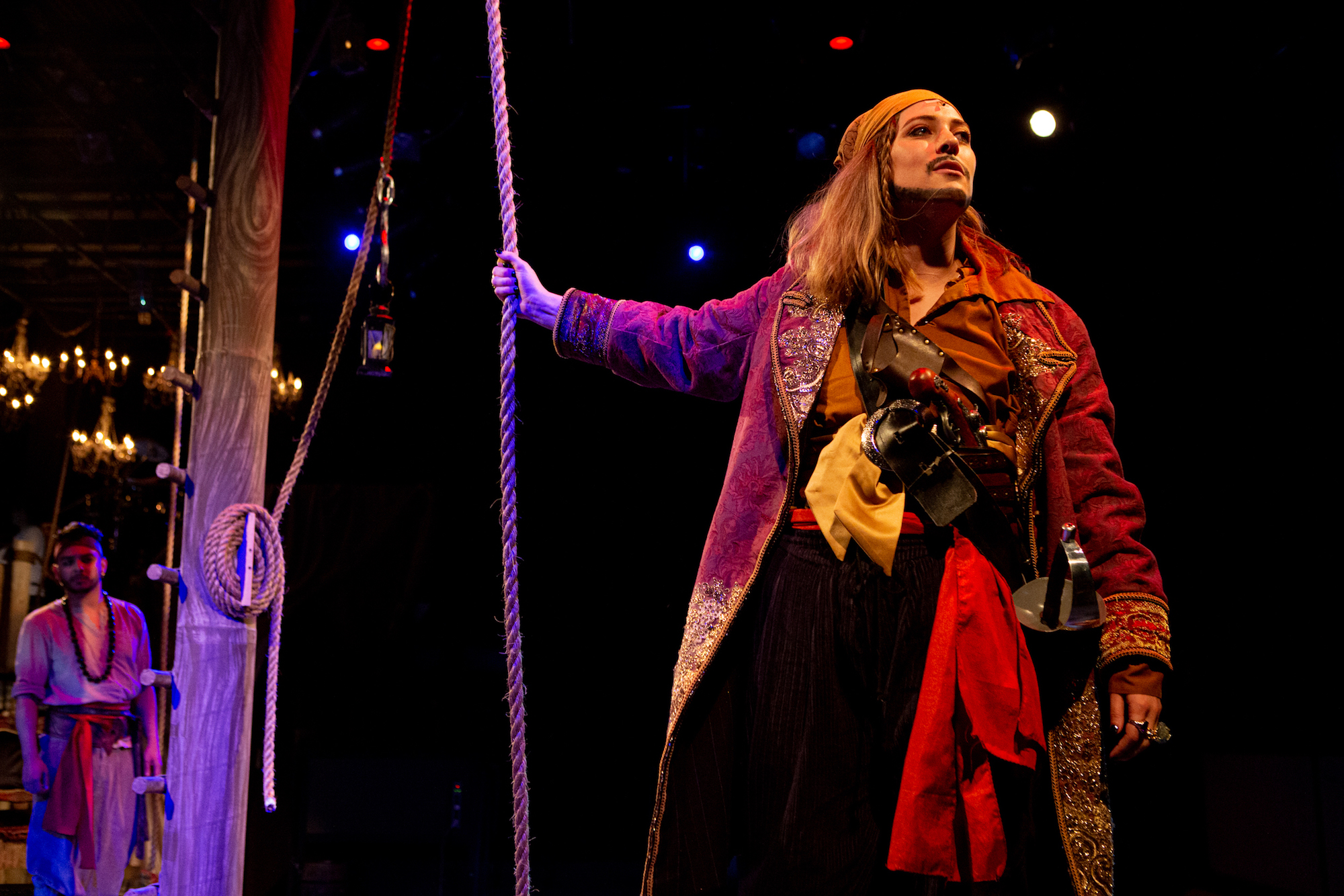 From the singing and acting skills of the cast (who, by the way, all joined production just three-and-a-half weeks before opening and still served unclockable performances), to the set and lighting design, Stede Bonnet: A Fucking Pirate Musical is such a joyful spectacle for both Our Flag Means Death fans and those who don’t know shit about it.

“Sometimes you need theater that just makes you feel good and lets you escape for two hours from your life — we don’t have enough of that right now,” Georgiou says. “There’s something different about live entertainment [versus] watching it on TV that affects you physically. So hopefully, this is just the start of a long future for the show.” 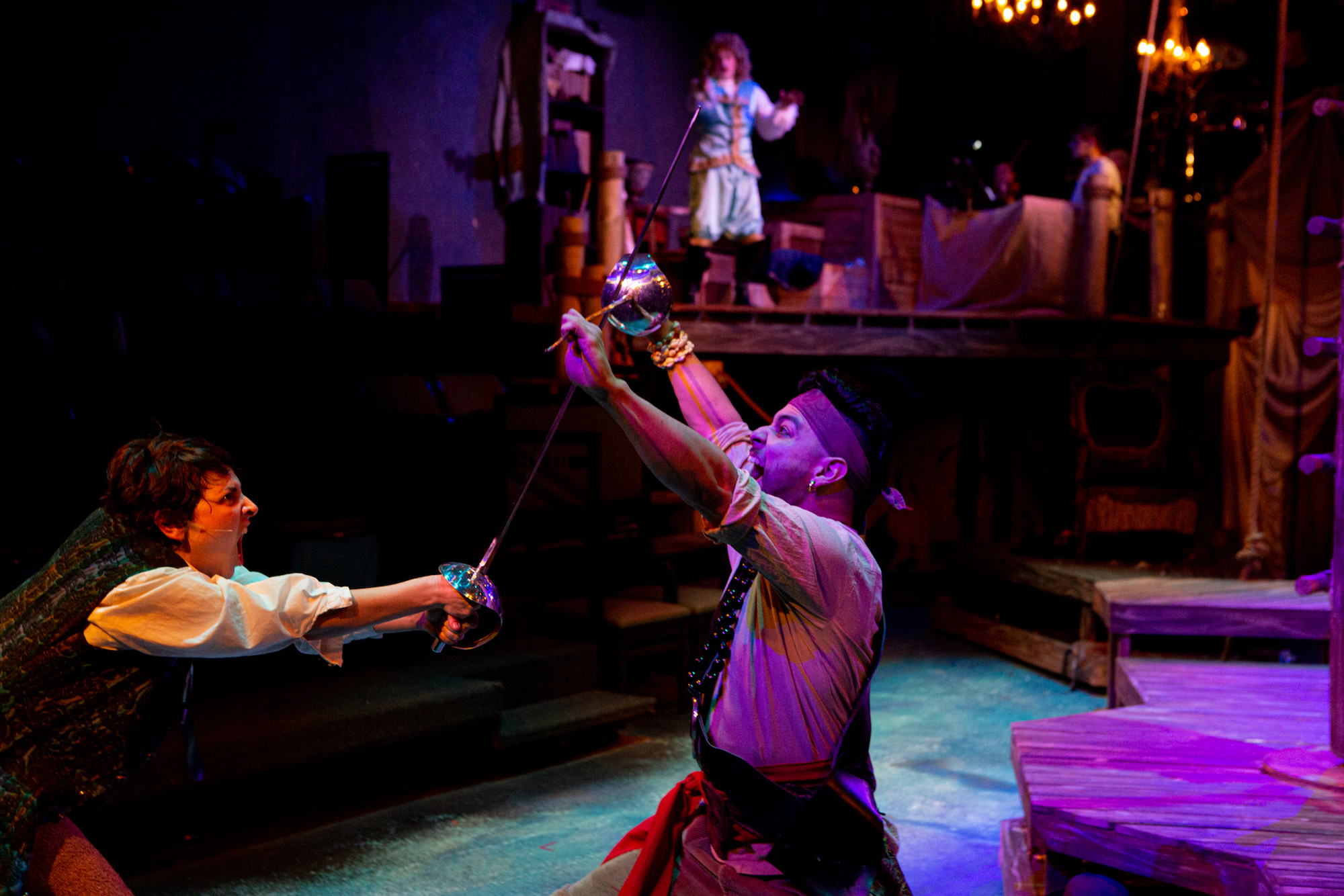 You can catch the show from April 28-May 1 at Theatre 3, with digital streaming performances available on April 30 and May 1.

All photos by Jeffrey Schmidt.