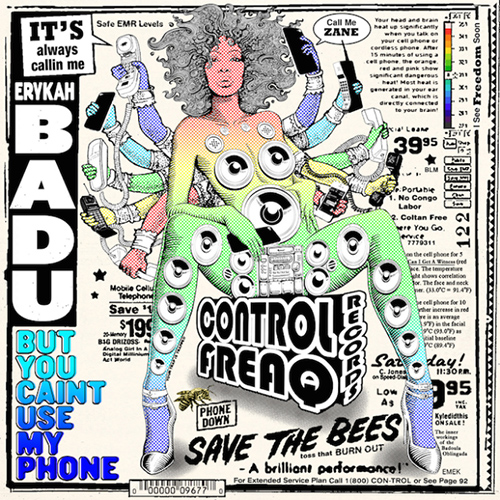 Erykah Badu’s New Mixtape Features Andre 3000 and A Guy Who Sounds Like But Isn’t Drake.

Perhaps because she already delayed its release once, Erykah Badu wasn’t going to make her fans wait long into her But You Caint Use My Phone mixtape’s rescheduled November 27 release date to hear her newest project. Rather, she released it right at the strike of midnight via iTunes and Apple Music. (The release will hit other digital services on December 4.)

Named after her classic 1997 cut “Tyrone,” the mixtape is Badu’s first release since she dropped her New Amerykah Part Two: Return of the Ankh LP in 2010. Created over a 12-day period in Badu’s native Dallas, the new collection’s 11 songs were each recorded alongside Dallas producer Zach Witness. Each track also centers around a phone theme.

In addition to Witness — called “Zach Witnessin” in a press release that made the rounds earlier this week and that also teased the album’s so-called “TRap & B” sound — two other guests show up on the mixtape.

Most notably, Andre 3000, father of Badu’s son Seven Sirius Benjamin, shows up for a verse on the song’s final track, the Isley Brothers-sampling “Hello.”

Also interesting: A rapper who sure sounds like noted Badu pal Drake appears on the songs “U Use To Call Me” and “Whats Yo Phone Number?” But alas, despite the fact that the hype surrounding this mixtape started with Badu covering Drake’s “Hotline Bling,” Badu has confirmed to Central Track that it’s not the 6 God on these songs; rather, it’s Atlanta rapper ItsRoutine (also known as Aubrey Davis), who has previously made waves for mimicking Drake, and who has been credited elsewhere as a co-writer on “Phone Down,” the second track Badu teased from But You Caint Use My Phone.

Badu describes ItsRoutine to Central Track as a “brilliant writer” who “can only grow into his own,” and tells us that she recently signed him to her Control Freaq record label.

Meanwhile, Badu’s “Hotline Bling” reinterpretation — called “Cell U Lar Device” on the mixtape — is just one of a handful of re-imaginations included in the release. “Mr. Telephone Man” and “U Don’t Have To Call” find Badu offering up her takes on the thusly named songs first made famous by New Edition and Usher, respectively. The Andre 3000 collaboration “Hello” also sees Badu making several lyrical references to Todd Rundgren’s “Hello, It’s Me.”

As of this moment, you can purchase the mixtape on iTunes. At the time of this writing, the album is also available to be streamed in full right here or on the below player courtesy of Datpiff.

People in Dallas can also head to the Lab Art Gallery in Dallas’ Design District to take part in a free-to-attend, Badu-hosted hometown release celebration and listening party for But You Caint Use My Phone starting at 9 o’clock tonight.