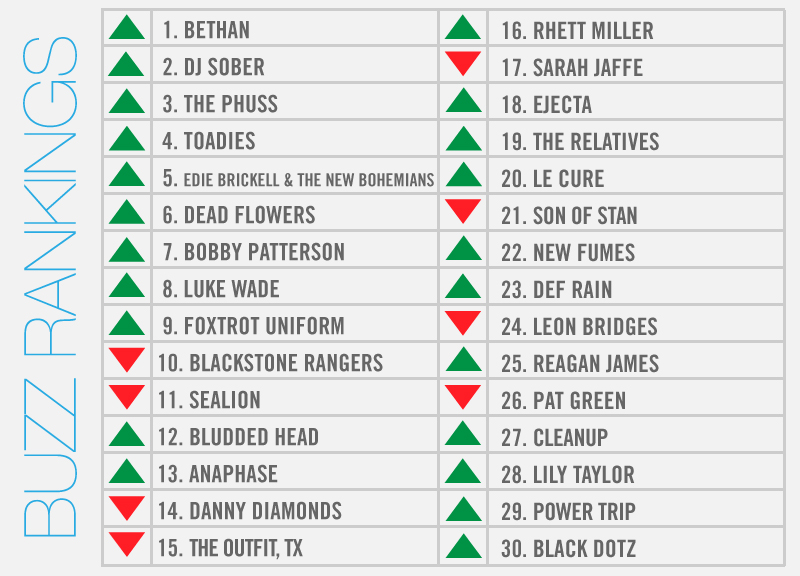 Bethan Did Better Than Expected This Week.

For the first time in a month, our weekly local music power rankings aren't dominated this week by the likes of Sarah Jaffe, A.Dd+ and Somebody's Darling.

In fact, in this week's Buzz Rankings shakeup, two of those three didn't even crack our Top 30.

Unlike that crowd, which has collectively topped our rankings some 20 times now, this week's No. 1 finisher is a first-timer: Bethan. The melancholic chamber pop quintet premiered the first single from its forthcoming debut LP via DC9 at Night this week. That one will come out early next month, but as the band sings in “Low Expectations,” you should probably try to temper your excitement for that one a bit.

Still, Bethan is just one of a number of acts that earned their spots in this week's rankings thanks to newly released albums. Also in that camp are Foxtrot Uniform and Lily Taylor, among others. And press for their own soon-to-be-released albums helped eke out spots for Black Dotz, Bludded Head, Danny Diamonds, Dead Flowers and The Phuss, among others. The majority of bands also receiving votes this week, we should point out, also fall into one of these two camps.

Speaking of Dead Flowers: The band's frontman Corey Howe made news this week when he saved Deep Ellum barbecue spot Pecan Lodge from a fire. And that's just awesome. What a hero that guy is.

On the live end of the spectrum, Edie Brickell & The New Bohemians announced a reunion show at the third-annual North Oak Cliff Music Festival, local soul legends Bobby Patterson and The Relatives are set to play a free show at Fort Worth burger outpost Fred's Texas Cafe, Polyphonic Spree offshoot Anaphase will mark its debut performance in Oak Cliff next week at The Kessler Theater and Rhett Miller will perform at the highly-touted “Do It For Durrett” fundraiser show on Monday that'll benefit the family of recently deceased ESPN writer Richard Durrett.

Meanwhile, just a week before its annual Dia de los Toadies festival, the Toadies made notable appearances in Spin and NPR and hosted a couple of happy hours at Three Links and Lola's.

Elsewhere: Luke Wade and Reagan James revealed they'll appear on the upcoming season of The Voice; Ejecta decided to change its name ; and DJ Sober teamed with his Booty Fade collaborator Picnictyme to release a new Gorilla vs Bear mix in honor of that site's upcoming fourth annual showcase.