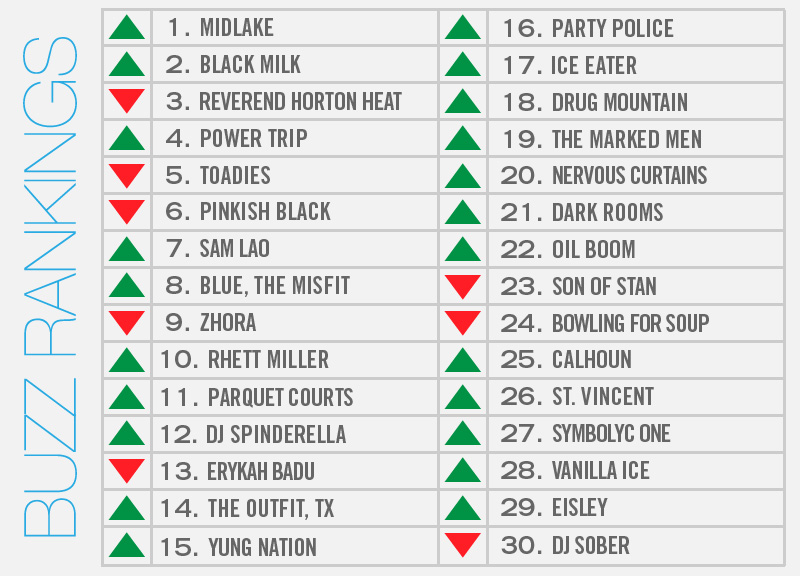 The loss of one's lead singer is a death knell for most bands.

But the departure of vocalist Tim Smith last year hasn't seemed to slow down Denton heroes Midlake too much at all. Buzz surrounding the band's upcoming fourth LP has been everywhere as of late, including over at National Public Radio, which premiered a new track by the band called “Provider” earlier today via its All Songs Considered blog. The band, which is gearing up for a two-night stand at Dan's as well as a two-night stint opening for Pearl Jam, is also preparing for a national tour in support of its November release, Antiphone.

Just behind Midlake in this week's Rankings is Detroit native Black Milk, whose first Dallas performance since relocating to the area will come tomorrow night as part of our monthly Red Bull-affiliated concert series. It's a fact we've mentioned enough times on the site that we won't continue to force it down your throat — well, too much anyway.

Still, Black Milk's Dallas debut is far from the only notable performance since last week's Rankings: In fact, a whole mess of shows from last weekend and this coming weekend are not what you'd call being of the run-of-the-mill variety. A long list of artists made live debuts, played reunion shows, secret shows or headlined festivals named after themselves.

To that end, Rhett Miller played a “secret” show at Twilite Lounge, Vanilla Ice popped up in Frisco, The Marked Men are playing the only Texas date on their current tour, Toadies and Reverend Horton Heat headlined festivals with their names on them, St. Vincent announced an intimate solo show at a local church, Party Police made its live debut, Fortune Field is gearing up for its first show in two years, Drug Mountain is playing its first show in over a year, Ten Hands announced its first show in years, and, earlier this week, Zhora played its first show since Homegrown Fest.

Also not to be forgotten are Power Trip and Parquet Courts, both of which were listed among Stereogum's list of the 40 best new artists of 2013 today.