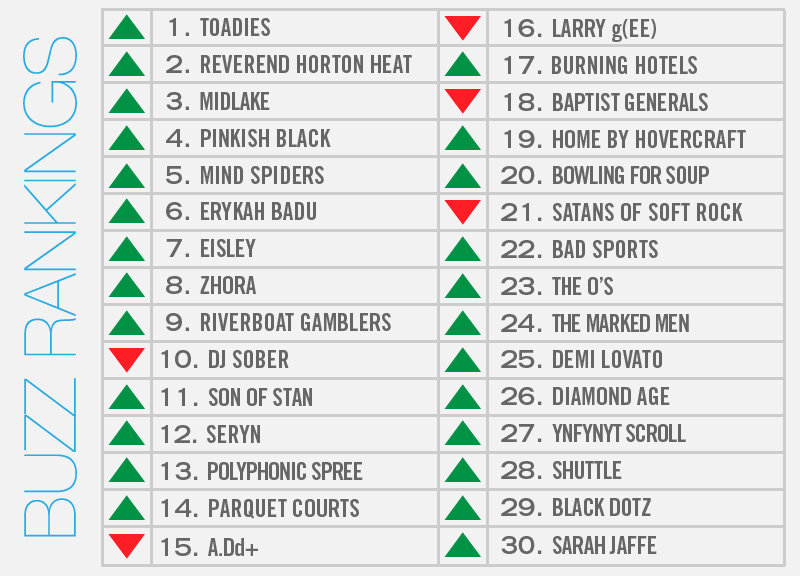 It's a New Dia For The Toadies.

Listen: When you have your own festival — and especially you're the ones headlining that sucker, too — people are going to be buzzing about it.

We've seen this effect before, of course. But this week brings about a couple added factors: For one thing, we're talking about the Toadies, who indisputably rank among North Texas' largest musical exports of the past 20 years; secondly, we're talking about Dia de Los Toadies, the band's sixth straight installment of its annual, namesake offering; thirdly, after years of going down in various locales around Texas, this year's affair is set to go down in the band's hometown of Fort Worth.

So, yeah, people are talking about it — pretty much every publication in town, really, and especially those with more Fort Worth leanings.

To that end, it's no surprise whatsoever that the Toadies would top this week's Buzz Rankings chart. Nor is it altogether surprising to see fellow locals Eisley, Burning Hotels and The O's earning votes — all three of these acts are playing the Toadies' hand-picked bill.

To be sure, most of this week's vote-earners earned their love for festival-related reasons. Dallas mainstay Reverend Horton Heat, for instance, grabs the second slot on this week's chart thanks to the fact that the band is co-presenting that massive Elm Street Music & Tattoo Festival, which is set to go down in Deep Ellum all weekend long. Riverboat Gamblers, meanwhile, headline tonight's kickoff festivities for that bash, and Bowling for Soup will stop by for a headlining gig over the weekend, too.

Still, some acts earned love this week for separate reasons altogether: Midlake announced that it'd be opening for Pearl Jam for a string of regional dates; Pinkish Black saw its new album's stream premiered on Pitchfork; Mind Spiders too saw a new song premiered on that taste-making site; Erykah Badu was the keynote speaker at a local hair festival; Zhora premiered a new song; and Bad Sports and Parquet Courts each continued to earn some national press for early singles from their upcoming releases.