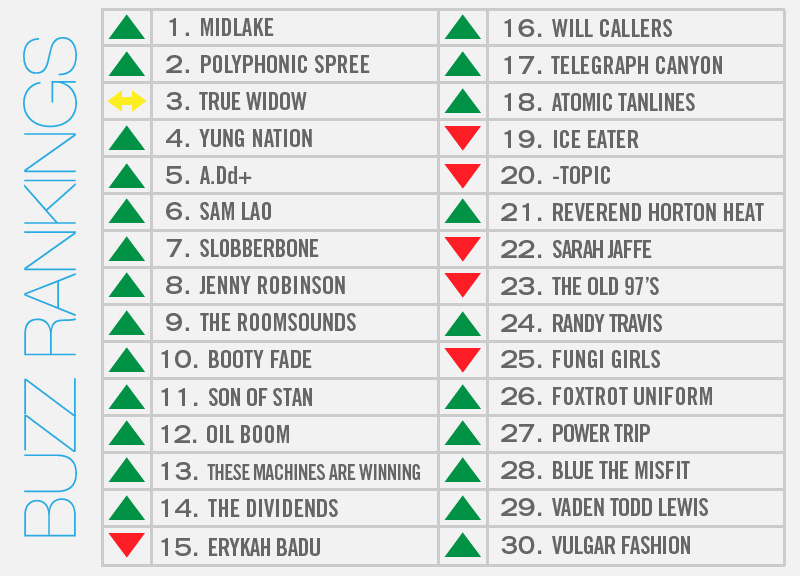 This Week, Midlake Moves On And Moves Up.

Earlier this week, Midlake made a pair of announcements — one of which we'd been anticipating for quite a while.

After several years of waiting, the band's follow-up to 2010's The Courage of Others, this week brought a name (Antiphon) and a firm release date (November 5) for the band's new album.

As for that other announcement, though? We'd have to say it was pretty unexpected.

Somewhat quietly, the band let on, lead vocalist Tim Smith left the group last November. While a three-year gap between albums isn't all that atypical for the band, it does make the fact that they completed their work so soon after Smith's departure seem a bit more impressive.

And despite the fact that these Buzz Rankings didn't exist the last time Midlake released an album, this isn't the first time the band have found themselves in the No. 1 slot — well, more or less, anyway. You may remember when the Midlake/Jason Lytle combo topped the Rankings after making a last minute, day-saving, performance on the main stage at 35 Denton following The Jesus And Mary Chain's visa issues.

Not at all surprisingly, the world-traveling members of The Polyphonic Spree find themselves just behind those Denton heroes in this week's list thanks to their latest album, Yes, It's True, and the subsequent release thereof tomorrow night at Granada Theater. At this point, it should be noted that fellow list-makers Telegraph Canyon will be opening that show.

Speaking of album releases: Last night's show at Dada was True Widow's first area performance since the release of the nationally well-received Circumambulation and served as an album release for the local stonegaze trio. Furthermore, the show proved that the heaps of praise already thrust on the disc by the likes of Pitchfork and NPR was more than deserved.

Other big shows this weekend can be credited with earning spots in the Rankings for several artists this week. For instance: Slobberbone will attempt to make a go of it in the intimate confines of newish Deep Ellum spot Twilite Lounge; A.Dd+ will headline Sausagefest; Oil Boom, The Roomsounds, and Foxtrot Uniform will take part in a KXT-sponsored bill at Kessler Theater; and Son of Stan, These Machines Are Winning and Ice Eater will take part in our second Red Bull Sound Select event next week at Three Links.