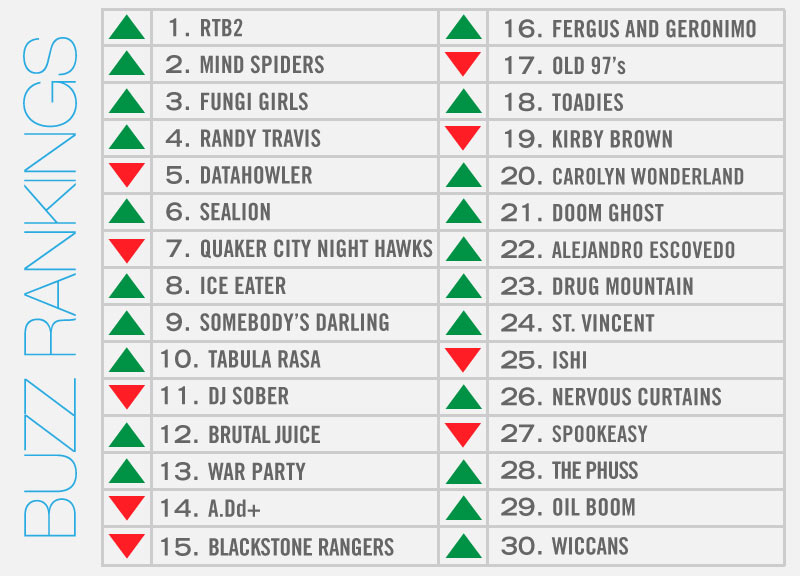 It Takes RTB2 To Tango This Week.

RTB2 is everywhere this week.

Aside from feature stories in nearly every local publication imaginable, the duo is capping off their week with release shows for their latest album 2 in Fort Worth tonight, in Dallas tomorrow night, and in Denton on Saturday as part of 35 Denton's big end-of-summer Hot Wet Mess event.

Of course, that's pretty much to be expected when one of the consistently most popular and universally adored acts in the Metroplex releases their first full-length album in five years. To say that their latest effort has been heavily anticipated would be something of an understatement. As such, the Denton outfit wrapped up the No. 1 slot in this week's rankings — in unanimous fashion, we might add — rather effortlessly.

The next two slots were filled with Pitchfork-approved area punk acts Mind Spiders and Fungi Girls who, historically, haven't played a ton of shows in town — especially considering how well the bands pull off their songs in live settings.

In the case of Fungi Girls, who headline the unofficial Hot Wet Mess after-party at Rubber Gloves this weekend, that seems to be changing. We've noticed the band cropping up on bills much more frequently as of late as members of that band have relocated from nearby Cleburne to Fort Worth. Sealion, War Party and Doom Ghost also find themselves ranking highly on this week's list thanks their involvement on the Rubber Gloves bill. In addition, Sealion and War Party will be using their Friday night Dallas show with RTB2 a tour kickoff of sorts.

On the other hand, Randy Travis had to work a lot harder to earn his high placement this week. With no upcoming releases or tours to speak of, Travis had to total a car and abandon it in a Frisco field to catch some buzz. Of course, the fact that he had also recently been involved in a brawl in a local church parking lot, and been cited for attempting to buy cigarettes from a convenience store while completely nude only made this week's news all the more talked about.

All things considered, though, we don't see the recent strand of bad press as a total negative. Around these parts we kind of think of Randy Travis as a bigger badass than ever.

Not to be forgotten is experimental noise act Drug Mountain, who opened for Lightning Bolt earlier this week. The gig, which featured an expanded lineup, was the band's first in two years.